The Sculpture Park: Works Selected by Eddie Powell is a unique auction of modern and contemporary sculpture, presenting a diverse and impressive collection of works ranging from established British artists to upcoming talent from across the globe.

At the end of a meandering country road just outside Farnham, behind gates adorned with Welsh dragons and daffodils, lies The Sculpture Park.

Described by many as ‘Surrey’s hidden gem’, the park houses over 800 works of sculpture dotted around its ten acres of scenic woodland and lakes, and this veritable oasis of art and nature, tucked away in the Surrey hills, is owned and curated by Mr Eddie Powell. 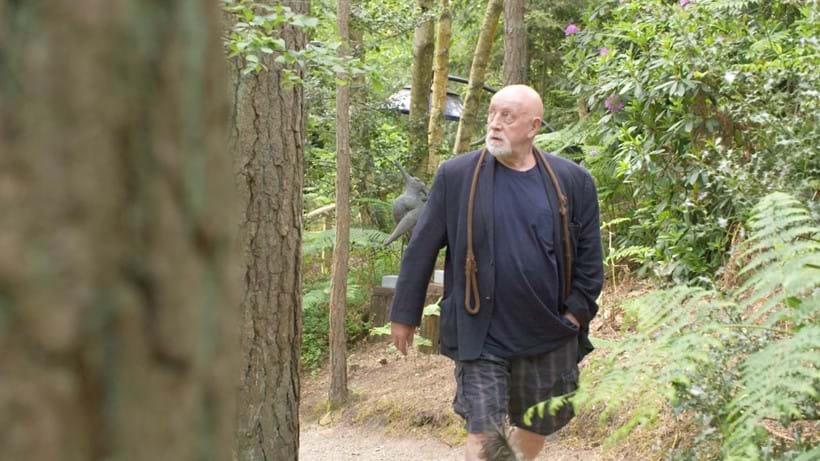 Eddie Powell at The Sculpture Park

Eddie is an artist, an entrepreneur and a proud Welshman. He runs the park with the help of his children, and walks the two-mile trail around the site several times a week, often accompanied by Dennis, his dog. Eddie purchased the stretch of land bordering Frensham Common Country Park in 1997. 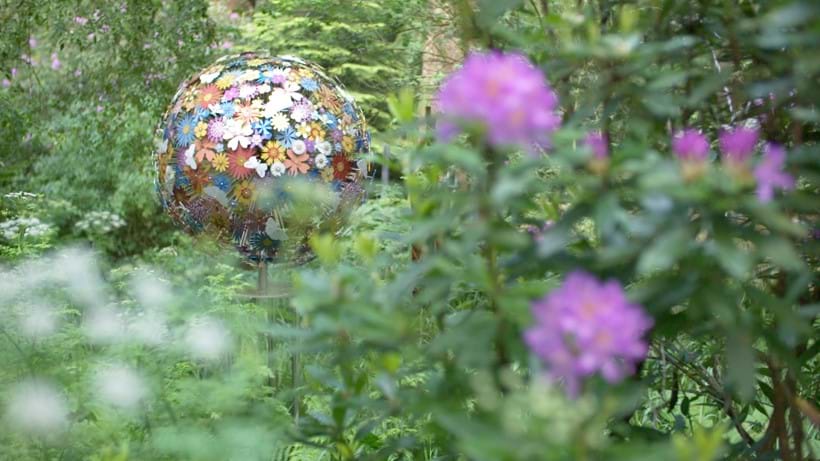 Over two decades later, Eddie has not only turned this previously undeveloped site into a picturesque destination, but has also created a collection of sculpture rare in its scale, quality and variety.

A photographer and sculptor by training, with an illustrious CV that includes the Guildford School of Art and a solo exhibition at London’s Photographers Gallery, Eddie is a self-proclaimed ‘compulsive dealer’. As a result, the collection is continuously evolving. 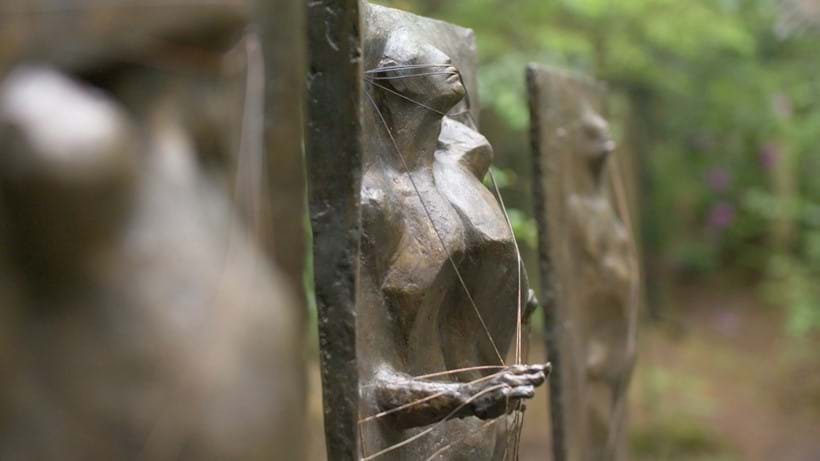 Currently, over 300 different artists are represented at the park. Keen to champion emerging talent, Eddie includes works by upcoming artists from every continent alongside highly important modern British sculptors.

The present auction reflects this dynamic mixture of 20th century giants, such as Phillip King, Michael Ayrton and Ralph Brown, alongside exciting contemporary and upcoming talent. 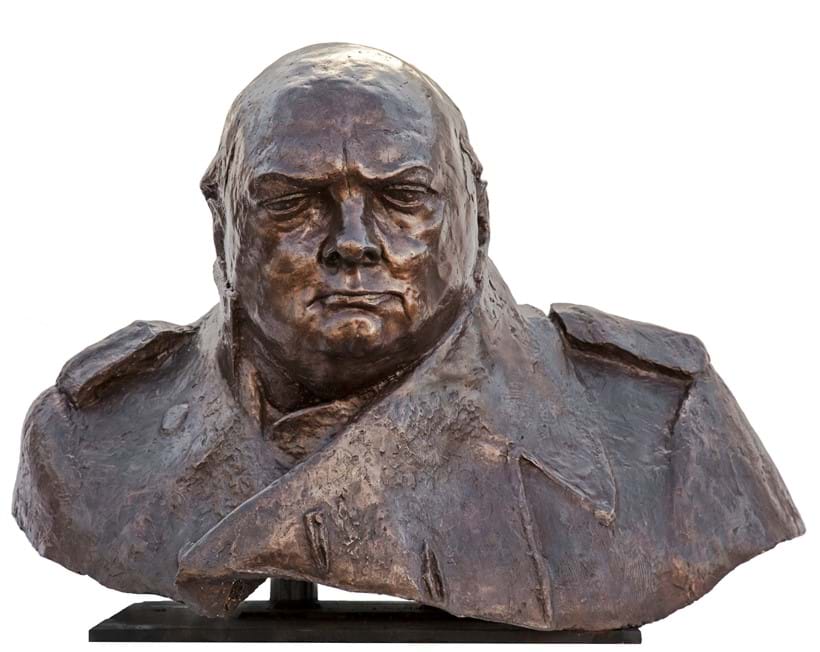 One 20th century lot of particular note is a bronze bust of Winston Churchill after the iconic monument by Ivor Roberts-Jones RA in Parliament Square, Westminster, which is the last cast from the plaster to exist. 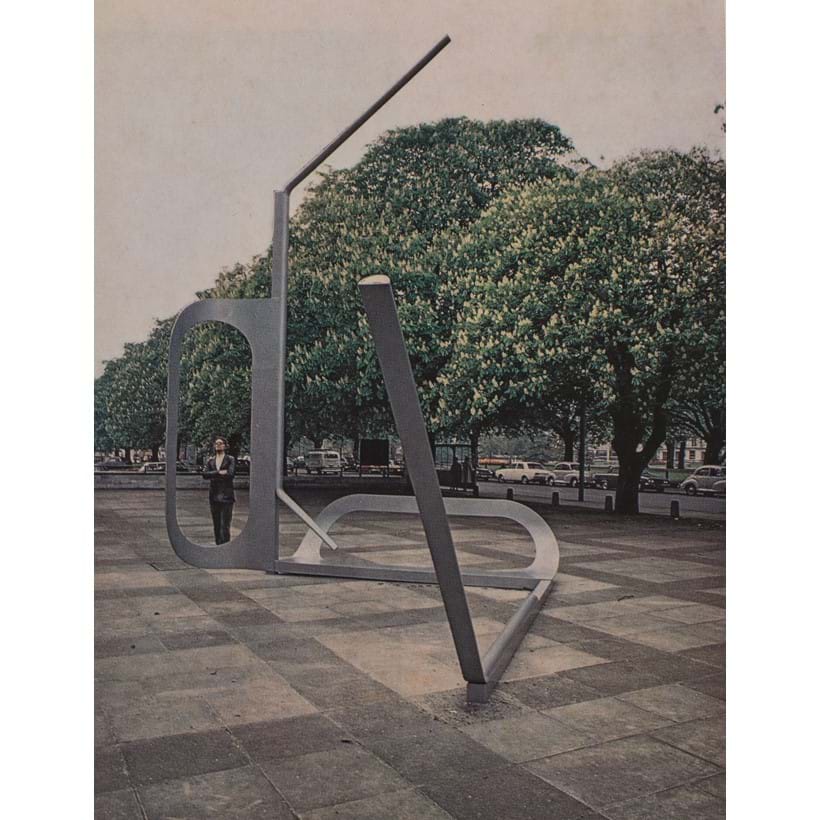 This auction will also see the reappearance of Astonia, the monumental steel public sculpture by Bryan Kneale RA, which was lost to the nation after its exhibition in the 1970s.

Kneale’s monumental painted steel public sculpture Astonia was commissioned in 1971 as part of the ambitious 1972 City Sculpture Projects. The goal of this national project was to place large-scale contemporary sculptures in busy city centres outside of London for several months. Kneale’s contribution was installed in the forecourt of Southampton City Art Gallery. None of the participating cities decided to keep the sculptures for permanent display, and it must have been after this temporary exhibition that Astonia relocated to the Leicestershire town of Market Harborough, where it had been installed at Robert Smyth Academy, a local school, by 1973. Astonia was long presumed destroyed, but the piece resurfaced when the school consigned it to a regional auction in 2014, where it was acquired by Eddie Powell. 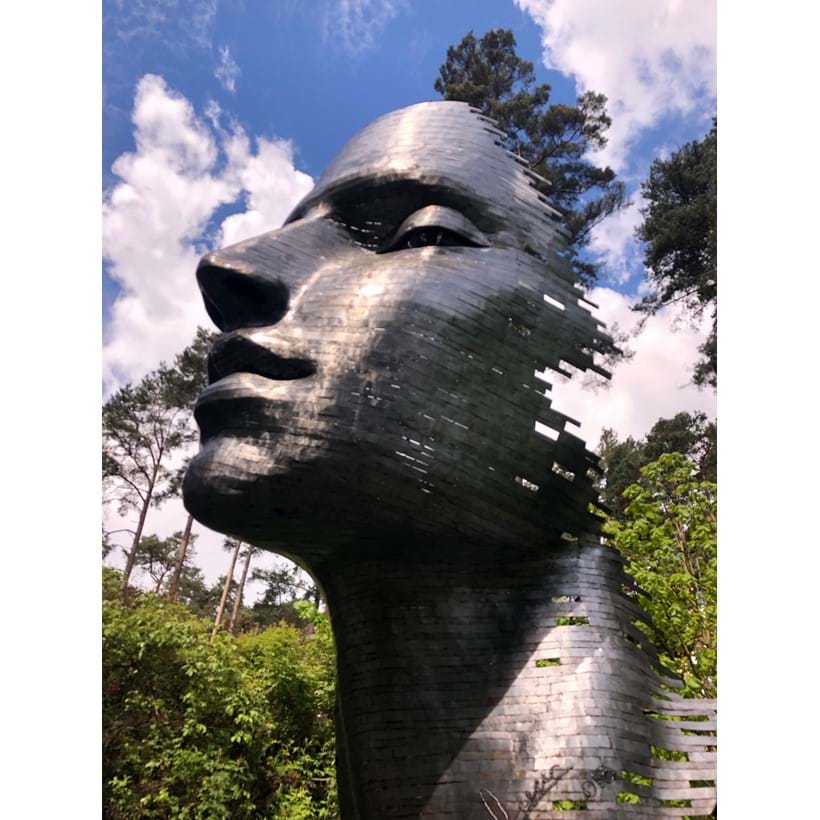 Contemporary highlights include the striking steel bust which graces the cover of this catalogue, Paraiso or Paradise by Cuban sculptor Rafael Miranda San Juan.

Rafael San Juan refers to his monumental steel heads as ‘Numens’, which translates loosely to ‘divinity’ or ‘divine presence’ from the Latin. Though shaped and soldered from hard strips of forged, recycled steel, the soft and tranquil appearance of the present lot aligns with this otherworldly description.

San Juan was educated at the San Alejandro Academy of Fine Arts, Havana, where he later also taught as a Professor of Sculpture. His works are widely exhibited and collected in Mexico, Cuba and the United States. One of his monumental female heads was for example featured in the Havana Biennial, another graces the streets of Guadalajara, Mexico, where the artist also lives and works.

The dramatic size of San Juan’s works, and sensitive attention to the human form, betray San Juan’s educational background in disciplines as varied as stage design and anatomy. 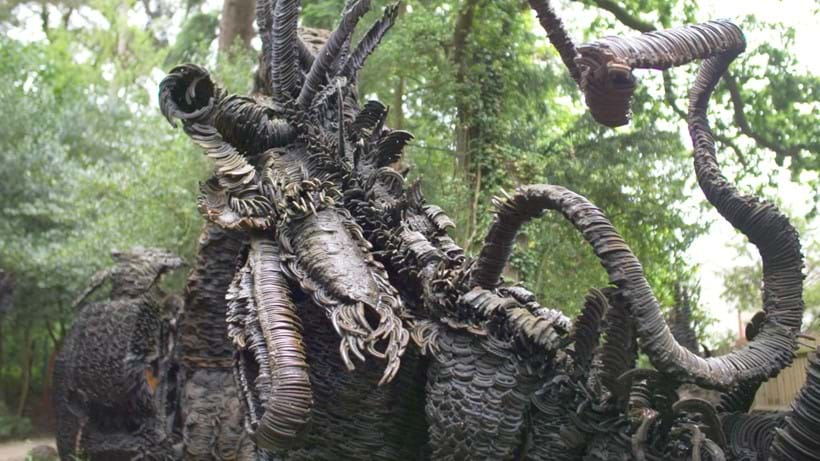 Another contemporary highlight is this colossal dragon made entirely from horseshoes, created by sculptor Jim Poolman over a period of twelve years.

A farmer’s son, Jim Poolman was raised around Windsor and spent the better part of his career in agricultural and mechanical ventures. He always maintained a strong interest in art and design, sculpting mainly in steel. Self- taught welder Poolman spent over twelve years and 10,000 hours creating this unique and monumental work, the largest sculpture he ever made. This dynamic landmark piece has been an icon of The Sculpture Park since its completion in 2017.’ 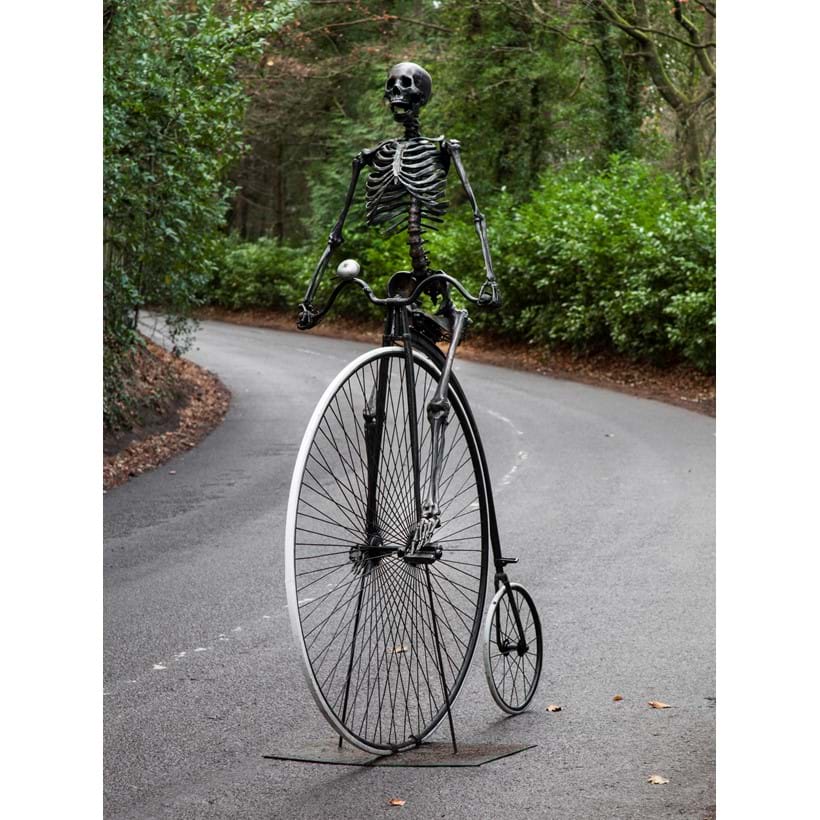 The auction also features a selection of works by Eddie Powell himself, who works under the pseudonym Wilfred Pritchard (his grandfather’s name).

He is a sculptor with a very eclectic approach. His work looks at the witty, macabre and the controversial. He has produced a number of works with skeletons in bizarre and humorous situations. His bronze works are well crafted and beautiful, the use of the skeleton in bronze is representational of the contrast between strong and fragile, and its juxtaposition with props brings a humorous touch to the uncanny subject matter. He also often uses found objects, simply reworking them to bring them back into existence. By exploring the tension between old and new, past and present, within the work and exposing the beauty of discarded objects and using them in a new exploration we begin to appreciate what we have forgotten to hold on to. 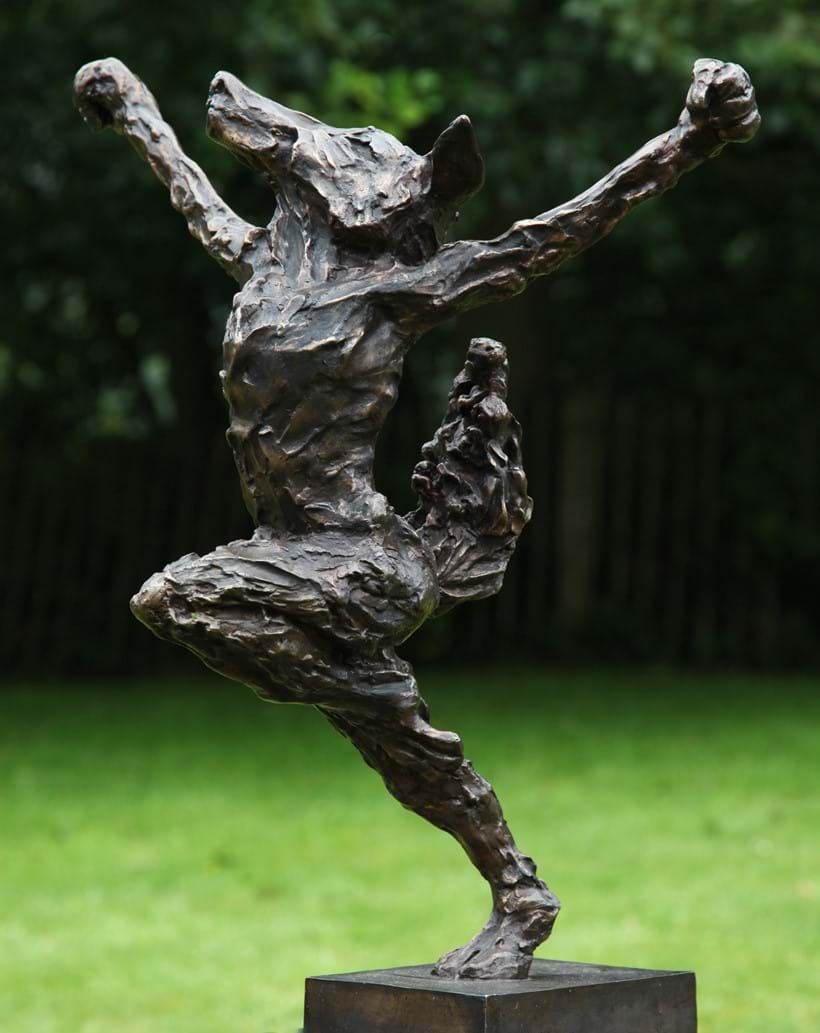 Dreweatts is delighted to present this unique and significant collection, which is not only unrivalled in size, but which was clearly assembled with bold taste, a sense of humour, and a true passion for sculpture.

VIEWING: The majority of the auction is on view at The Sculpture Park with selected items on view at Donnington Priory. Please see the relevant online lot listing for confirmation of its location.

EXTENDED VIEW AND TALK: Sunday 7 July | 10am-4pm
Join us for an auction preview at Dreweatts on Sunday 7 July. A guided tour of the exhibition will be held at 11am.