Dreweatts Interiors sales are a regular auction event throughout the year and they provide a rich source for clients looking to either furnish a new home from scratch or add to existing rooms.

We would be delighted to hear from you if you would like further information on either buying or selling in our Interiors auctions. Please contact us: info@dreweatts.com | +44 (0)1635 553 553.

Occasionally more whimsical pieces are to be found in these auctions, and lot 357 here, manufactured by the German toymaking firm, Bing of Nuremberg, certainly falls into this category. The touring motor car features a removable bevel glass windscreen, lamps, two rear doors each with cast handles. The rear seat bears the applied label with trademark: a diamond with the letters GBN above ‘Bavaria’.

Bing was founded by brothers Ignaz and Adolf Bing in the 1860s, and the company expanded rapidly between 1895 and 1914, employing over 5,000 people in the lead up to the first World War. After the death of Ignaz around 1918 the company was known as Bing Werke (BW). Bing’s output was remarkable and by 1928 it was one of Germany’s leading toy manufacturers, with annual sales of around DM27m recorded in that year. As well as their own range of toy trains, track and trackside accessories and buildings, Bing also produced toy boats, ships and trams, magic lantern equipment and slides, optical equipment, electric and steam motors and components. However, the depression in trade following the Wall Street crash of 1929 proved disastrous for the future of the firm and its assets were taken on by Karl Bub, a rival manufacturer. 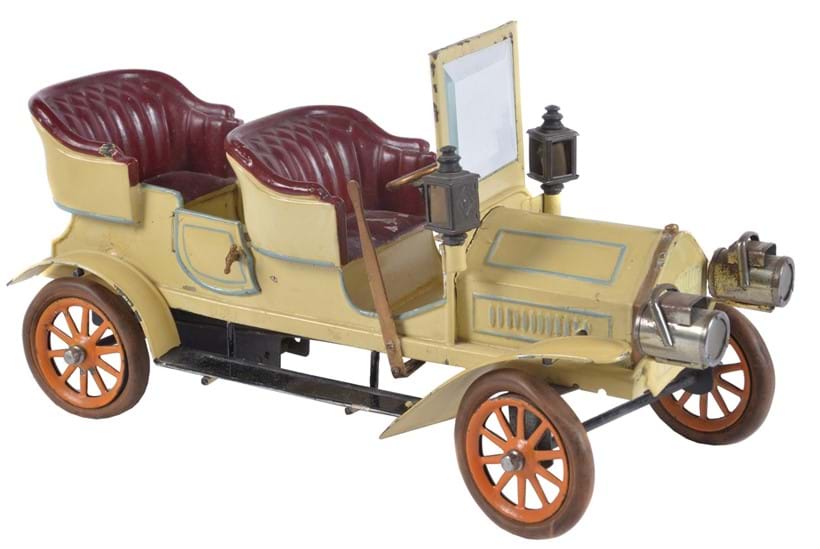 Inspired by France and Italy

From a selection of paintings, the watercolour above is by Nicholas Hely-Hutchinson. The artist is based in Dorset, with the surrounding countryside and the coast as well as the changing seasons providing the inspiration for his work. He also cites Paris and Venice as favourite locations and Graveyard with Trees with its vivid, deep blue sky, rolling hills and cypress trees would seem to depict a scene in possibly France or Italy. 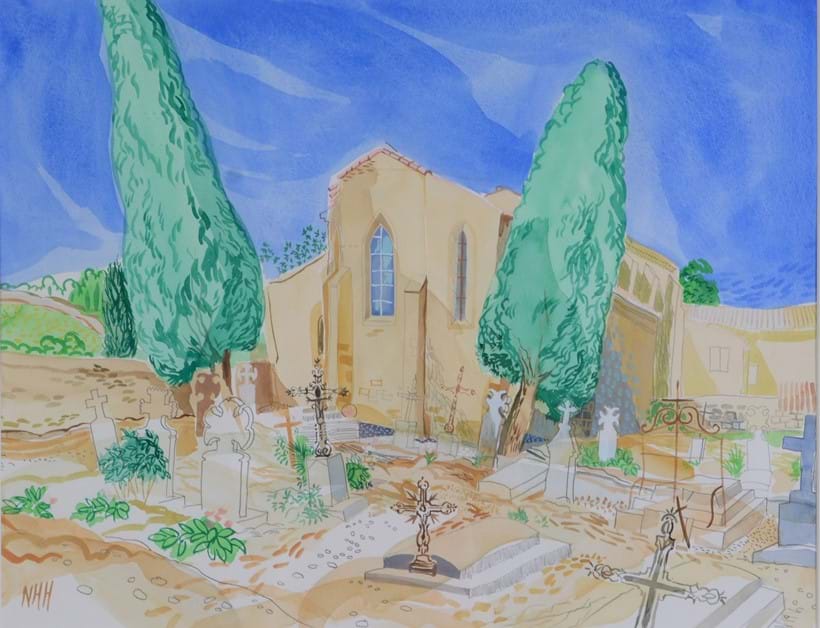 Royal Worcester was established in 1751 and it is one England’s oldest remaining porcelain brands still in existence, although production no longer takes place in Worcester. These two similar green-ground and gilt urns and cover signed by W.A. Hawkins date from 1907. They are decorated with still life panels featuring an abundance of flowers and fruits which perfectly complement the grand proportions, colouring and design of the urns.

William Hawkins who created these still life paintings was the Supervisor of the Painting Department at Royal Worcester and worked there from 1874 until his retirement after 54 years’ service in 1928. 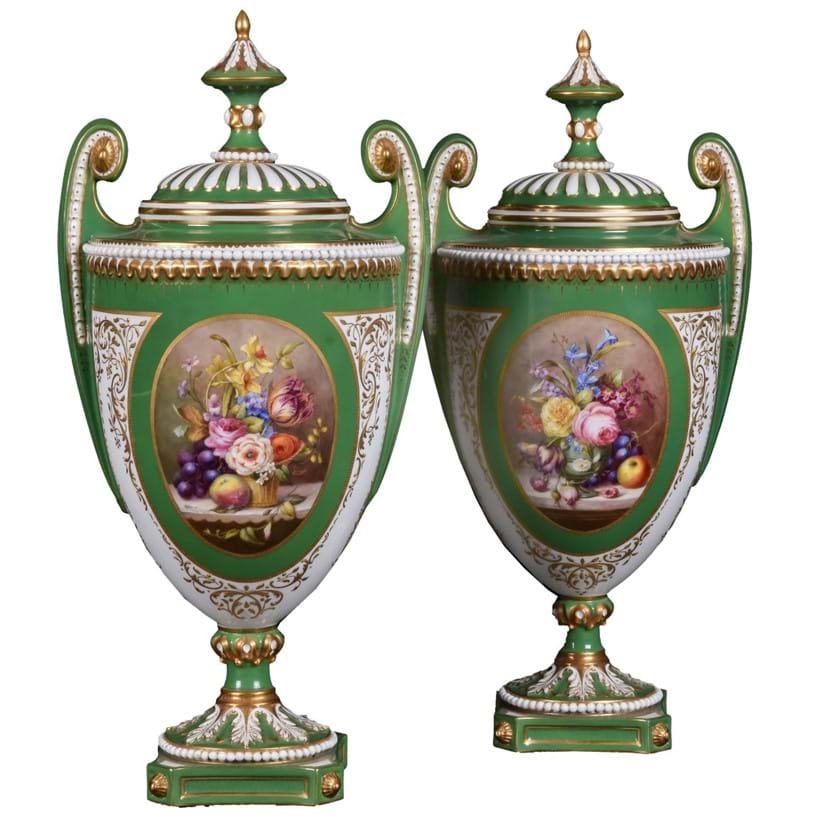 From a Private Collection

This George III giltwood and gesso girandole convex mirror dates from circa 1810. It may only have small proportions, measuring 80cm high and 62cm wide, but it feels grand with scrolling candle arms, topped with an eagle perched on a rocky outcrop flanked by dolphins. This mirror would make a big statement in a small space. 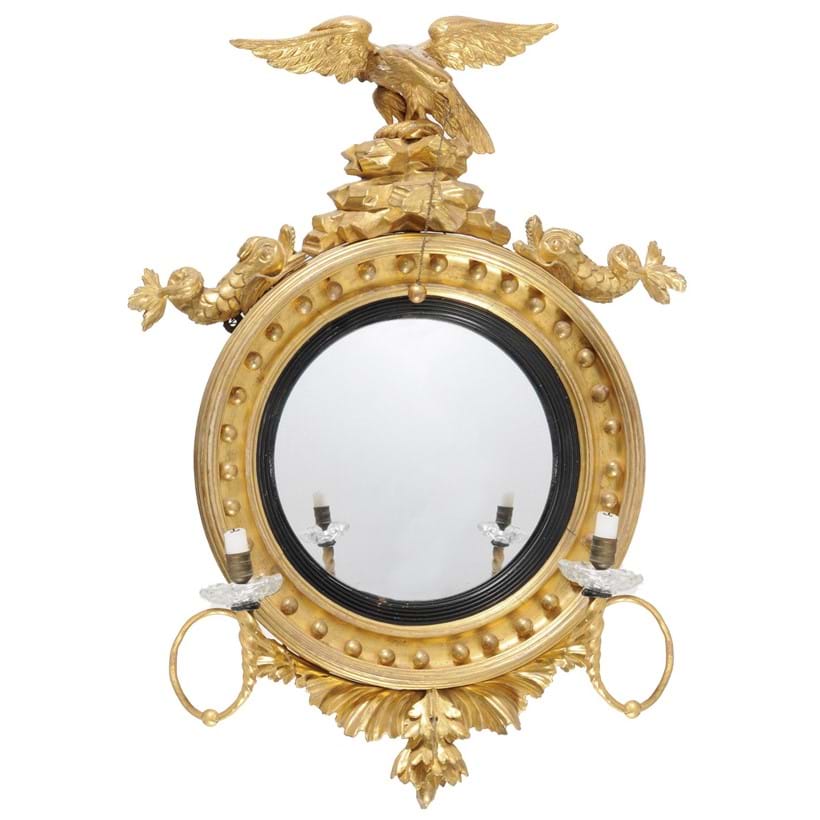 This Louis Philippe satinwood and gilt metal gilt-mounted Portico mantel clock, circa 1840, contains an eight-day bell strikiing movement with outside countwheel stamped to the backplate with the name BECHOT and serial numbered 2502. The 4inch Roman numeral dial is signed 13 vi chresbreght à Bruxelles and the case is of classical, architectural form.

The style of architecture and design under Louis Philippe (1830-1848) was the first decorative style not imposed by royalty, but, rather by the tastes of the growing French upper class. Unlike his Bourbon predecessors the King wore business attire, not formal robes, he lived in Paris shunned ceremonies and did not impose any formal styles and his personality helped shaped the aesthetic of the era. 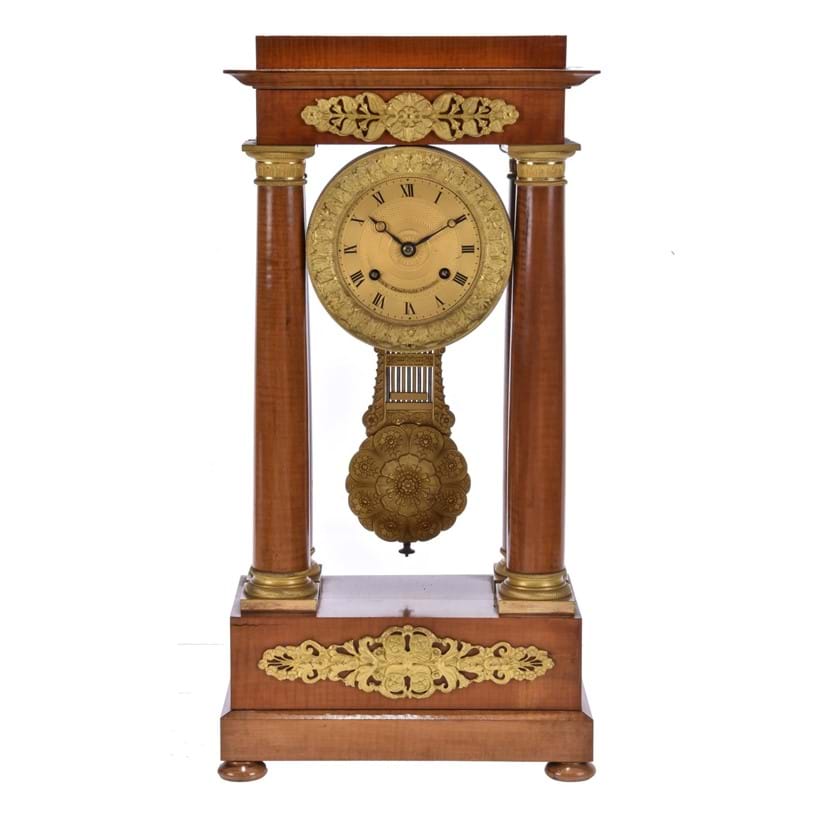 Maps and works on paper from a Normandy Manoir

The auction includes a private collection of twelve maps and works on paper from a Normandy Manoir. They  cover a wide range of geographic regions but mainly focus on the East, including a set of three maps by Schenk & Valk, (lot 89, est. £600-800 +fees) showing the provinces of Iunnan, Queicheu, Quangsi et Quantun, Huquang, Kiangsi, Chekiang, ac Fokien and Suchuen et Xensi.

Of historical Colonial interest, lot 92, (est. £300-500 +fees) by Herman Moll shows the respective land holdings of England, Spain, France, Holland, Denmark, and Portugal in the ‘East Indies’ in the early part of the 18th century.

Lot 93, (est. £200-300 +fees) shows a plan of Jakarta (or Batavia as it was known) from a similar date and indicates the land use at that time as well as illustrating key buildings such as the town hall and castle.

The collection also includes a plate from Sebastian Münster’s Cosmographia showing a birds-eye view of Venice (lot 85, est. £150-250 +fees). The Cosmographica was the earliest German language description of the world. The plate in the auction is from the first Latin edition and is the earliest work in this collection dating from circa 1550. 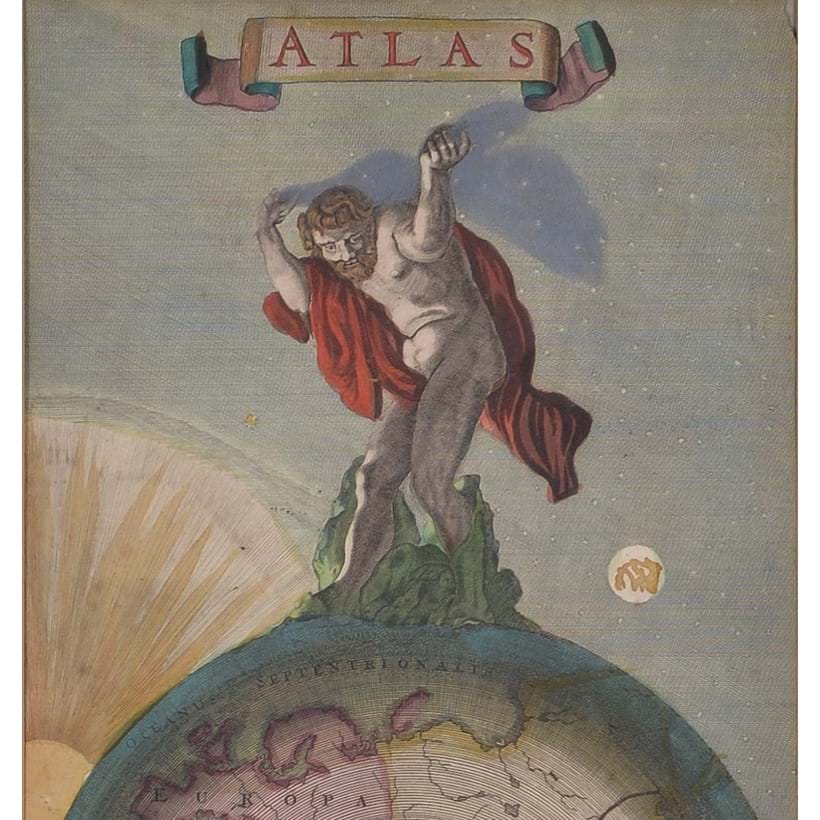 Several works on paper in the auction depict various classical themes and lot 125 comprises 22 engravings by Sir William Hamilton, taken from the French edition of his publication Collection of Etruscan, Greek, and Roman antiquities from the cabinet of the Honble. Wm. Hamilton, His Britannick Maiesty's envoy extraordinary at the Court of Naples. The frontispiece and various book plates from the publication are also included in this lot.

Sir William served as British Ambassador to the Kingdom of Naples (1764-1800). His second wife, Emma, Lady Hamilton, is most famed as Lord Nelson's mistress.