Coming up on 6 September, we have our auction of Fine Clocks, Barometers and Scientific Instruments. Featuring a strong selection of items, here we take a look at some of the highlights.

Pierre Le Maire is recorded in Baillie, G.H. Watchmakers & Clockmakers of the World as becoming a Maitre of the clockmakers' guild in 1675. He worked from St. Germain, Paris alongside his son Jean, however as a Protestant he was imprisoned in 1687 and his workshop/stock sold-on. Soon afterwards it is believed that he moved to Amsterdam.

This type of portable pocket sundial was devised by Michael Butterfield an English instrument maker who settled in Paris in around 1685. By the end of the century Butterfield's workshop was located on 'Le Quay de L'Horloge' which would have positioned him right within the Parisian clockmaking community. 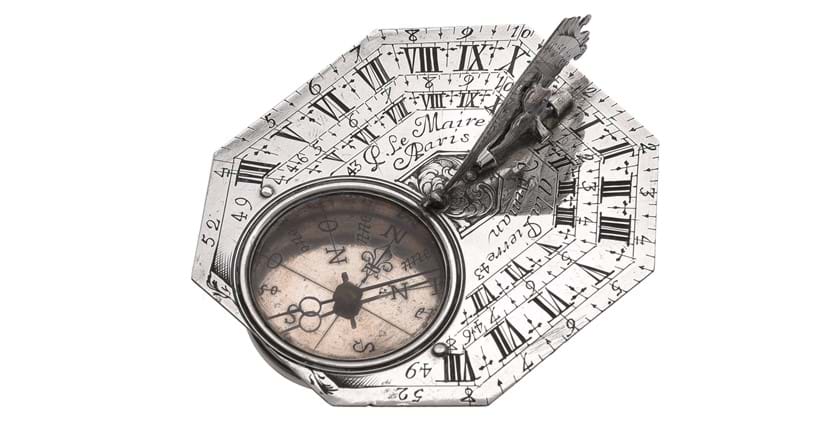 We then have Lot 58, a Victorian mahognay cased two-day marine chronometer with thermometer, by Dent of London, dating to circa 1845.

Edward John Dent was a talented horologist who at the age of 17 transferred his apprenticeship from the trade of tallow chandler to watchmaking under the charge of Edward Gaudin in 1807. By 1817 he had become well known as a watch and clockmaker receiving commissions from the Admiralty for a 'Standard Astronomical Clock' and pocket chronometers for the Colonial Office Africa Expedition. In 1830 Dent went into partnership with the renowned watch and chronometer maker John Roger Arnold which continued until 1840 when he left and set up business alone as E.J. Dent at 82 Strand, London, primarily making marine chronometers, watches and precision clocks. In 1843 the firm expanded taking on a second premises at 33 Cocksur Street, with the Strand premises moving down the road to number 61 by 1851.

In 1852 Edward Dent successfully tendered to make the 'great clock' to be housed in Stephen's tower at the New Palace of Westminster. The clock was completed by 1859, apparently at a financial loss to the firm, however it ensured that Dent became a household name synonymous with fine clockmaking. Unfortunately Edward John Dent did not live to see the installation of the 'great clock' as he died in 1853. He was succeeded by his stepson Frederick Rippon Dent, who, in partnership with his brother Richard, continued to expand the business. By 1862 the firm had added 34 Cockspur Street and 34 & 35 Royal Exchange to their list of addresses and, although having seen natural passage of ownership over the intervening years, the business still continues to trade today as Dent & Co. 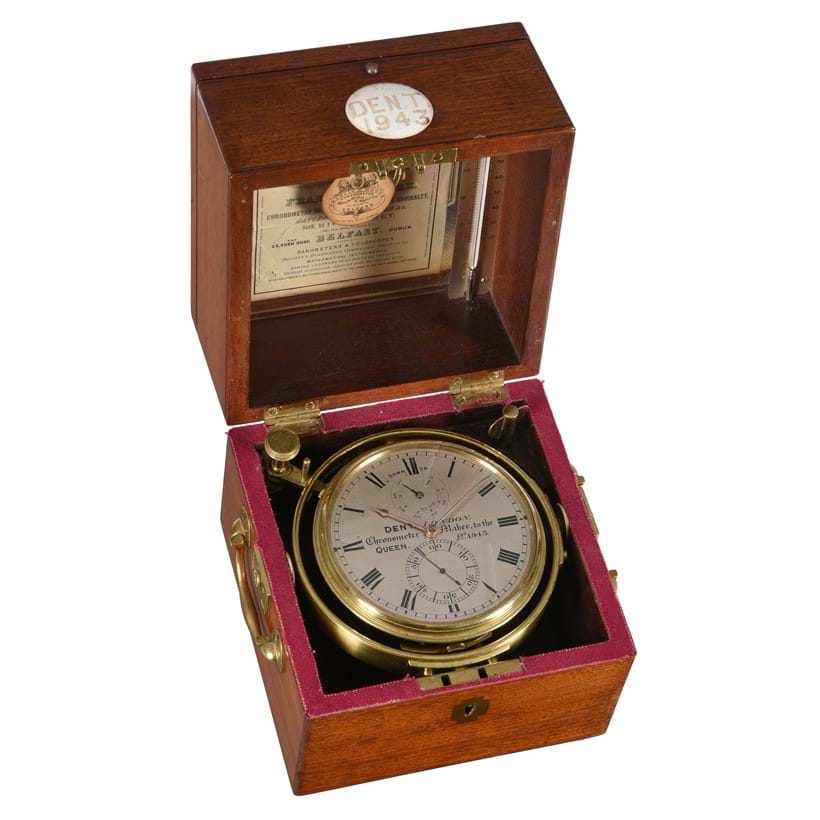 Continuing through the auction, from the selection of clocks, there is a lovely group of carriage clocks. A highlight is Lot 104, an unsigned fine French gilt fretwork and portrait miniature inset grande-sonnerie alarm carriage clock, Paris, dating to circa 1900. This comes to auction from a private collection in the East Midlands, having previously been the property of Lord and Lady Swaythling.

Although this rather impressive high-quality current clock appears to be unsigned it does share some strong similarities with the work of LeRoy and Fils, and can be compared to a less ornamental example sold in these rooms on Wednesday 24 June 2020 (Lot 98). 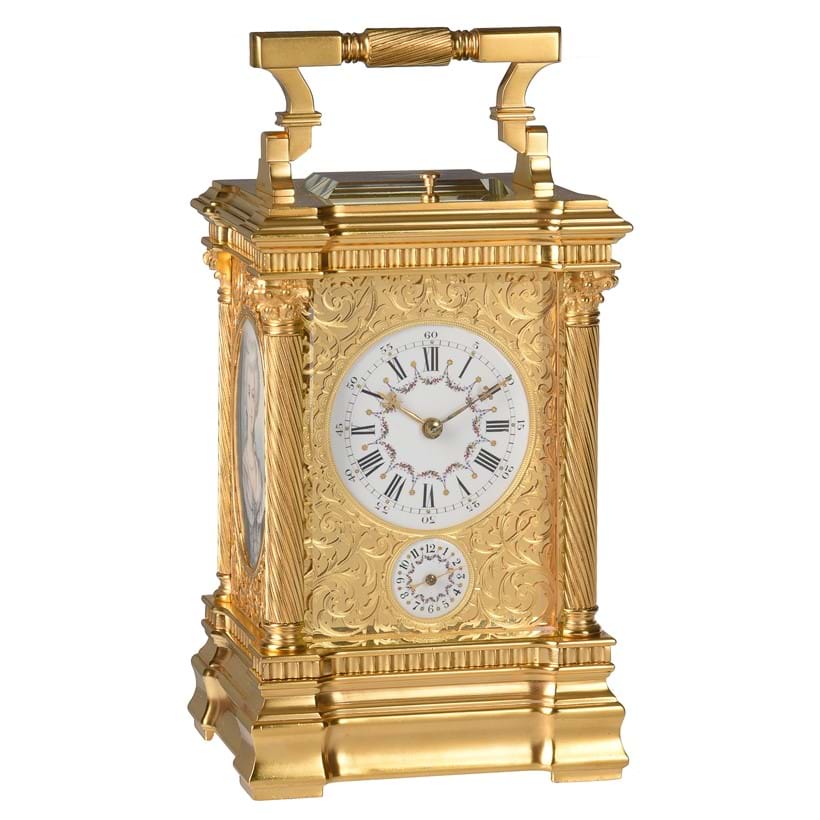 Finally, we take a look at Lot 178, a fine George III brass mounted ebonised quarter-chiming table clock, made circa 1760 by Thomas Grignion of London.

Thomas Grignion was born in 1713 the son of the Huguenot clockmaker Daniel Grignion (born 1684). Thomas presumably trained under his father but neither gained their freedom of the Clockmaker's Company.  Daniel Grignion was based close to the eminent Quaker clockmaker Daniel Quare and worked for him in some capacity (most likely some form of informal journeyman) hence after Quare's death in 1724 he made use of the goodwill associated with Quares name. Thomas joined in partnership with his father in around 1730 and then worked alone in the business from around 1750. Daniel Grignion died in 1763 and Thomas in 1784.

Although relatively little is known about the Grignion family, surviving examples of their work is generally of unusually high quality. 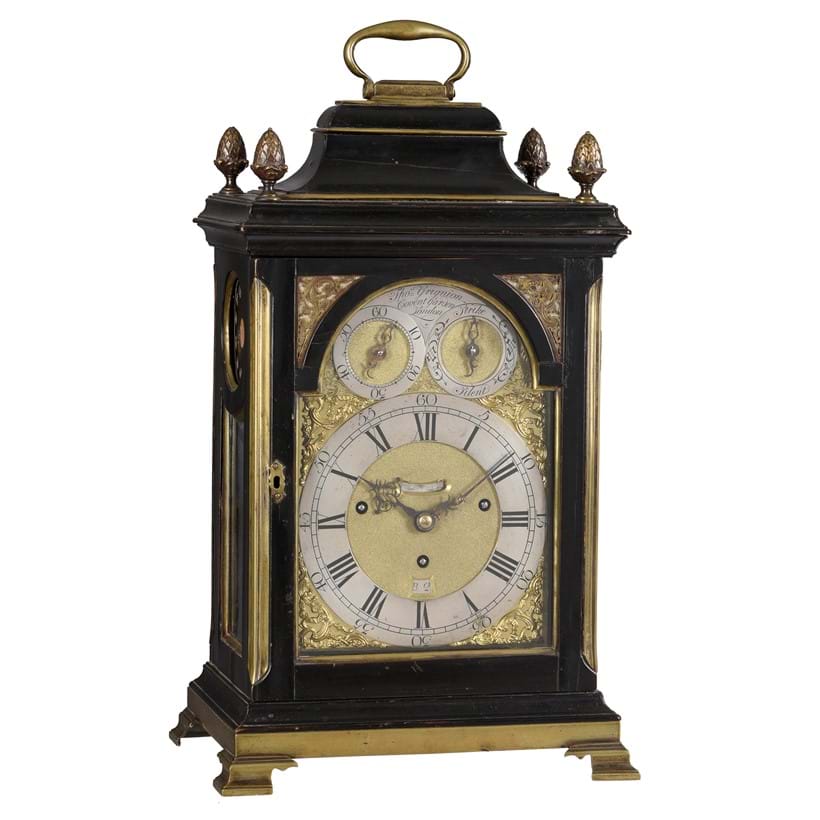