For a civilisation that has lasted over three thousand years, ancient China produced what has become the oldest extant culture in the world. Last year, we saw great success with our Chinese Ceramics and Works of Art auction in November, featuring a private collection of Chinese ceramics from Lieutenant Colonel William Roy Hodgson. Our upcoming June sale will present collectors and art lovers with a careful selection of works of art that cover the different ‘golden ages’ of the civilisation. Here our Chinese and Asian Art specialist, Yingwen Tao, picks out some of the highlights.

One of the outstanding characteristics of Chinese art is the extent to which it reflects the class structure that has existed at different times in Chinese history. Lot 150 shows a bronze gu vessel which was known as a ritual vessel used to serve wine in the Shang dynasty. As the earliest dynasty of traditional Chinese history, firmly supported by archaeological evidence, the Shang dynasty (1600BC – 1046BC) rose from a clan residing along the Yellow River and soon gained control over central and north China. In early China, as in other societies, the mechanism that generated social cohesion was ritualisation. The Shang dynasty is remembered for its splendid bronze casting technique. Bronze vessels were used in divinatory ceremonies for sacrificial offerings of meat, wine, and grain, primarily to the spirits of the clan's ancestors, especially those of the ruler and his family. 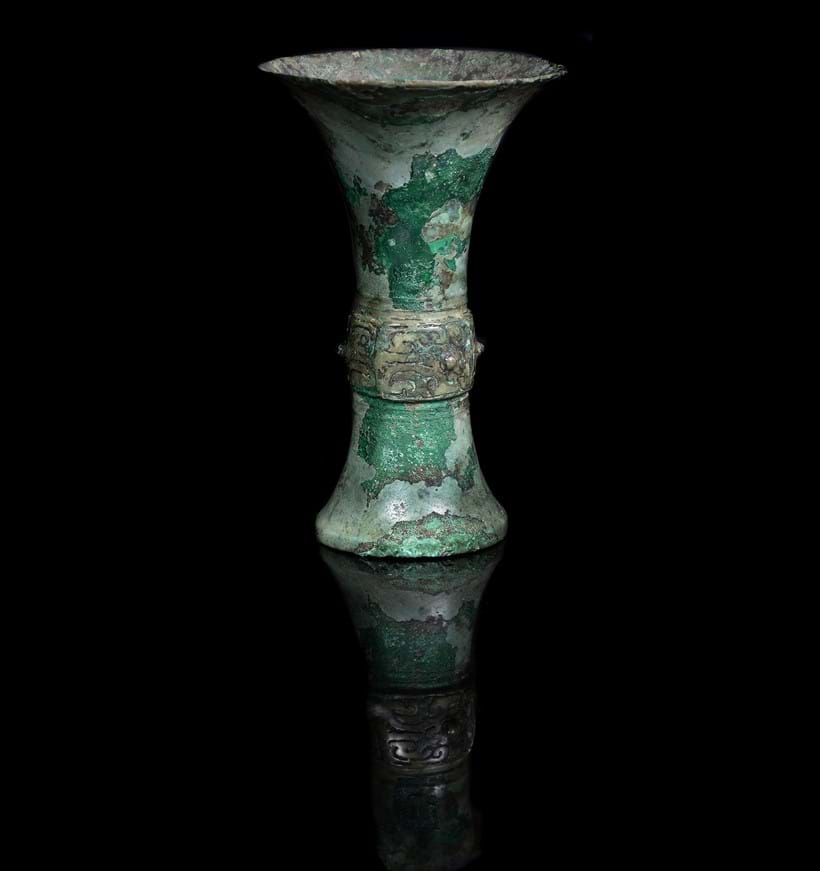 Simplicity and Purity: the Song dynasty

In the decorative arts, the Song dynasty (960-1276) marked a high point in Chinese pottery. Unlike Shang bronzes which often bear designs of mythical taotie beast masks, Song wares are noted for their simplicity of shape and the purity of colour and tone of their glazes. The simplicity and freshness inherent in Song monochromatic wares can evoke a deeply personal aesthetic consciousness, a bittersweet mix of loneliness and serenity as its minimalist shape and subtle hue push the viewer to go beyond its physical form. 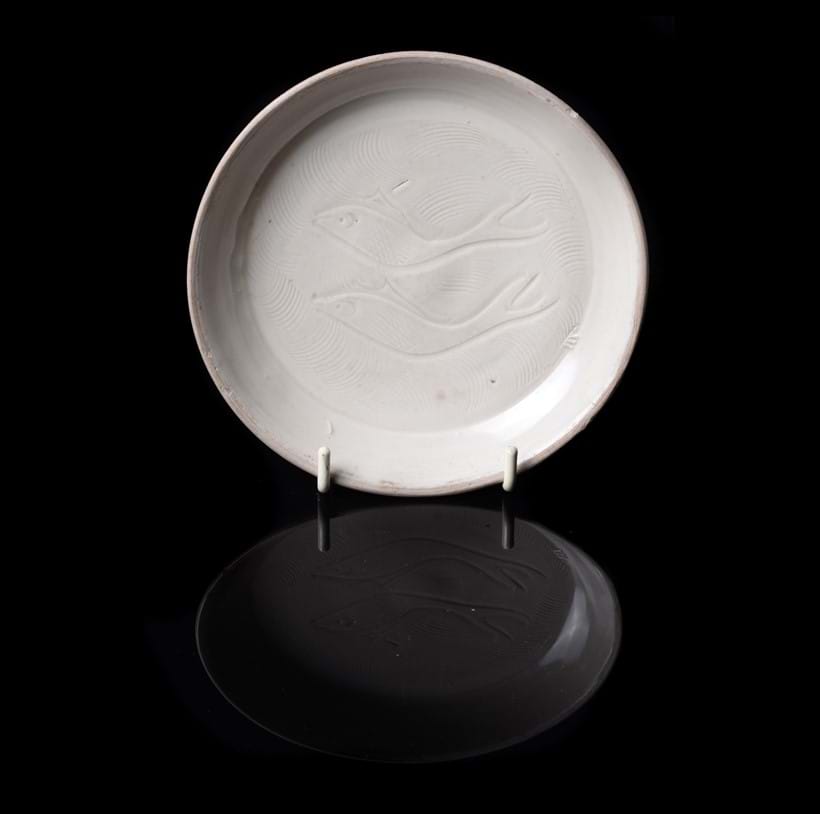 Lot 291 presents an attractive small Chinese Ding ‘Twin Fish’ dish. With a focus on a less-is-more principle, Ding wares were ranked among the ‘Five Great Wares’ [五大名窑] of the Song dynasty, a term coined by collectors of the Ming and Qing dynasties. Best known for producing small utilitarian wares covered with a slight creamy or ivory coloured glaze, the kiln site is located at Quyang in Ding County, Hebei Province. Early Ding wares are generally left in their natural form undecorated in the 10th and early 11th century. From the late 11th century and early 12th century they are increasingly incised and carved, and later through the thirteenth century they are mould-impressed and densely patterned.

Although the 14th-century blue and white jar set a world auction record of £15.68 million for Asian works of art in 2005, it has been since the late 16th century that Chinese blue and whites have been widely known in Europe. Portuguese traders began importing late Ming blue and whites to Europe, resulting in the growth of the ‘Kraak’ porcelain trade (named after the Portuguese ships called ‘carracks’ in which it was transported). The trade in porcelain decorated only in cobalt blue pigment under the glaze became the defining aspect of Chinese export porcelain. 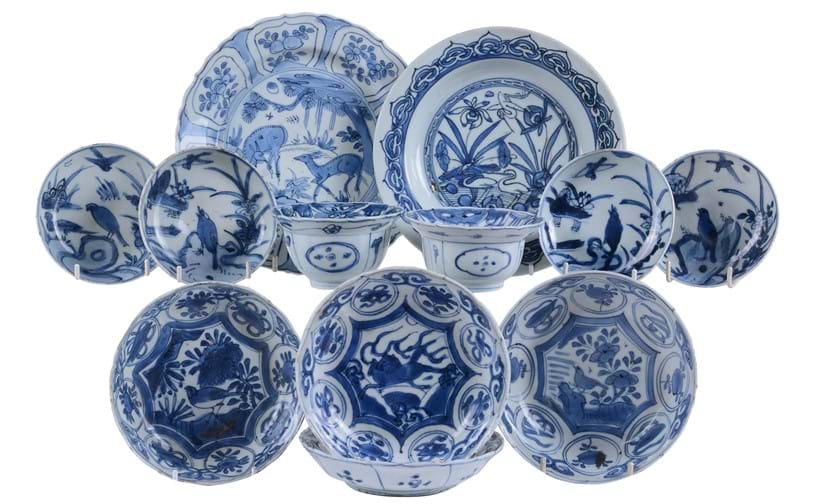 Lot 311 includes a group of Kraak wares, dated 1573-1620. Business for export porcelain remained flourishing in Jingdezhen as the main production centre of porcelain of the world at that time. The porcelain market needed to stay afloat in order to salvage the sinking economy of the Ming dynasty. Porcelain became a major export alongside silk and lacquerware, and was exchanged in particular for Spanish silver which came from the Americas via Manila. 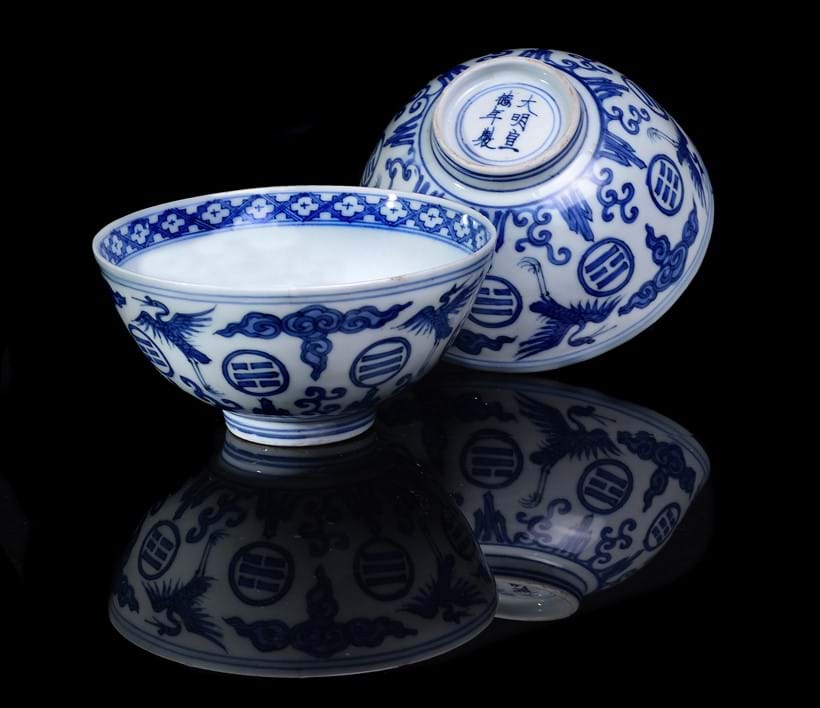 The late Ming dynasty also saw unprecedented popularity of Daoism under Imperial patronage, especially under the Jiajing and Wanli emperors who were fervent supporters of Daoist practices. Lot 318 is a nice pair of blue and white 'Crane and Trigram' bowls, Wanli period (1572-1620). From blue and white porcelain to dragon robes, China has a time-honoured pictorial tradition of depicting the immortal world. Decorated with Daoist emblems of cosmology such as cranes, sacred mountains, and the Eight Trigrams, the pair represents an ideal image of ‘heaven’, the celestial realm where Ming emperors seek immortality.

The final glory: the Qing Empire

As the last of China’s royal dynasties, the Great Qing Empire saw rapid and profound change in China when the country enjoyed an extended period of political stability for about three hundred years. Lot 265 presents a rare embroidered silk panel which exemplifies how women embroiderers, for the first time in Chinese history, had the opportunity to empower themselves by stitching their names on the works. Traditionally seen as a leisure 'female activity' in Imperial China, the Gu Family's womenfolk innovatively integrated brush painting and embroidery in a complementary manner and brought such 'leisure activity' to a professional level. 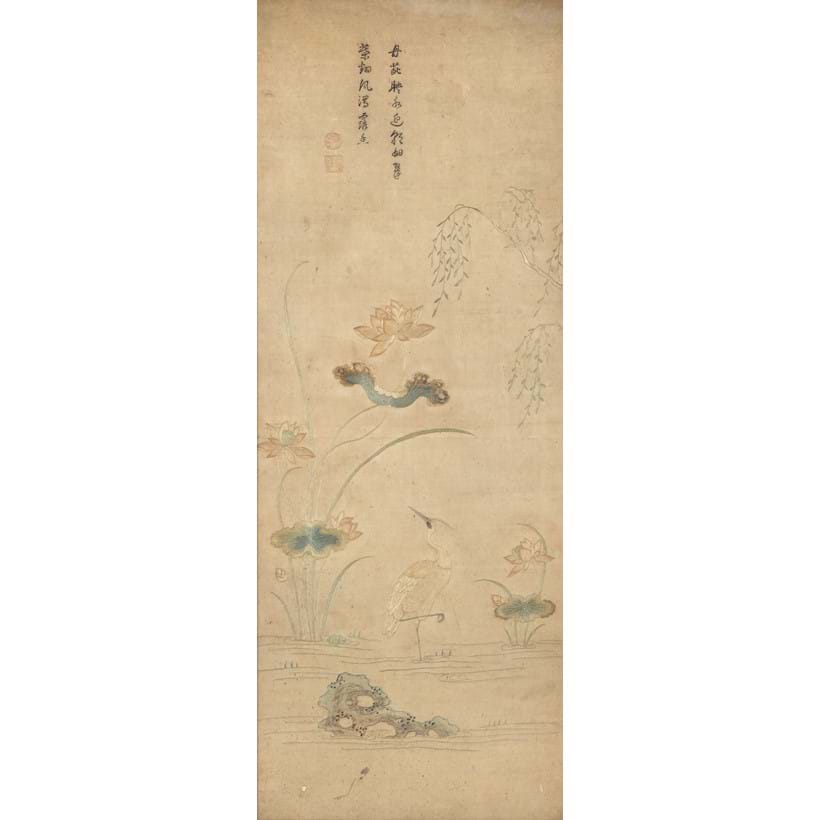 Lot 355 shows a coral-ground ‘Lotus’ bowl, mark and period of Qianlong. The Qianlong Emperor, as the ultimate connoisseur of Chinese art and longest living emperor of China, pushed the final flourishing of Chinese art. 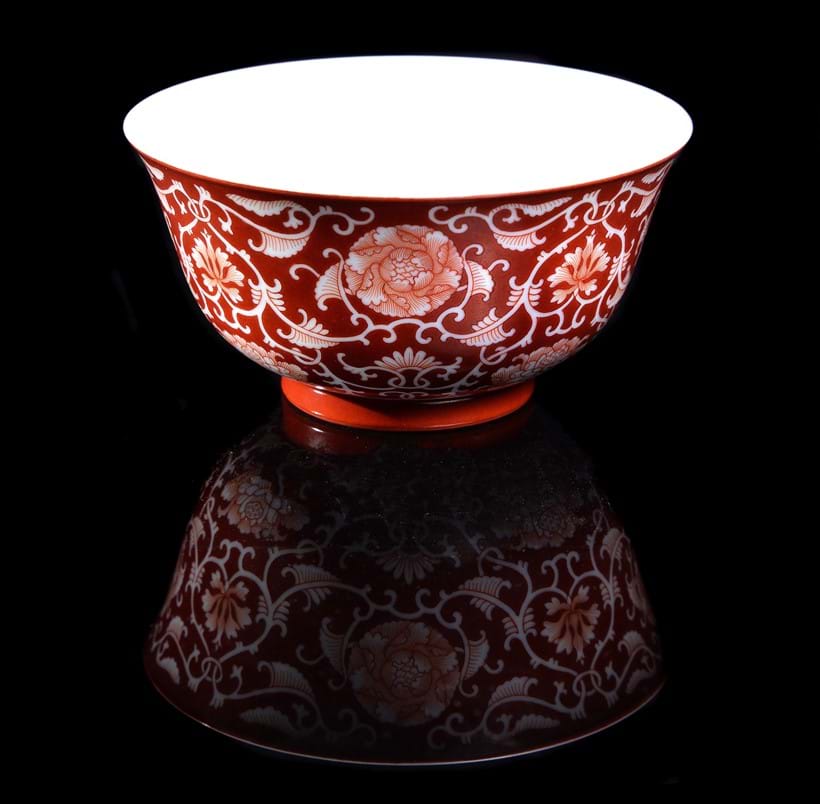 It was also during his reign that European art was actively introduced and admired in China. Jingdezhen began to take orders of Western painting and prints with scenes ranging from Christianity to topographical or historical, as shown in Lot 364. An identical crucifixion plate is illustrated by David S. Howard & John Ayers in China for the West, Volume one, no. 312, pp. 318-9. Another identical plate can also be found in the Musee National de Ceramique, Sevres. 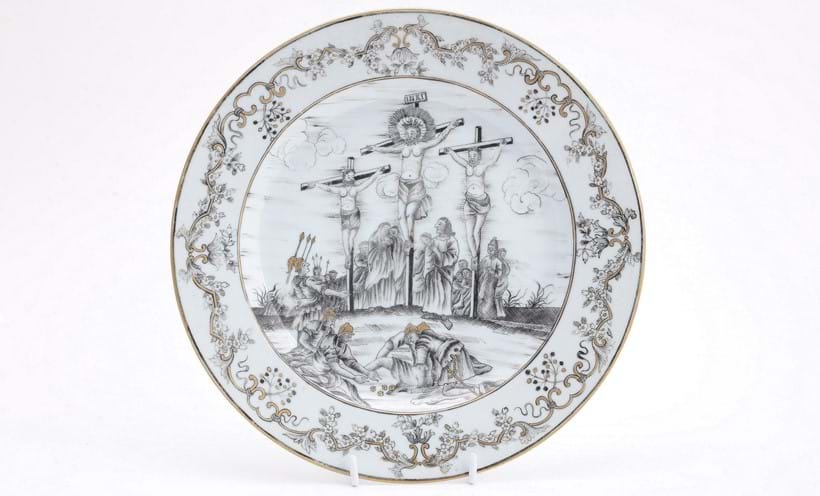 The Guangxu Emperor was best known as the first Chinese leader implementing policies of modernisation and capitalism. The imperial kiln in Jingdezhen, as a result, saw its last revival. During Guangxu’s reign, a large amount of resources were devoted to production in the imperial kiln. Lot 404 is a pair of Guangxu yellow ground saucer dishes, each incised with two five-clawed dragons.