Highlights from our Modern and Contemporary Art auction this autumn, include a superb group of Modern British Sculpture. This group includes two impressive works by British artist Henry Moore (1898-1986). Here we take a look at these sculptures.

Here we have Lot 91, 'Reclining Nude: Crossed Feet'. Made from bronze with a green patina and mounted on a wooden base, this work was conceived by Moore in 1980. It was then exhibited at The Goodman Gallery in South Africa, before it was bought by a private collector in 1981.

"From the very beginning the reclining figure has been my main theme… The first one I made was around 1924, and probably more than half of my sculptures since then have been reclining figures."

Along with the theme of the mother and child, the reclining female figure is a form that dominated Moore’s artistic output across his career. He loved the composition both for the essence of the idea as well as the freedom of expression that it afforded him. Unlike a seated figure that required a pedestal or support, or a standing figure which often lacked structural stability, the reclining figure could be presented in any manner and in any position without the incumbrance of other distracting elements.

“One is standing, the other is seated and the third is lying down... of the three poses, the reclining figure gives the most freedom, compositionally and spatially... A reclining figure can recline on any surface. It is free and stable at the same time. It fits in with my belief that sculpture should be permanent, should last for eternity.” Henry Moore, cited in the Art Gallery Handbook, Art Gallery, New South Wales, Australia, 1994

In contrast to many depictions of the female nude, Moore’s work is never overtly erotic or sexualised. Indeed it has more in common with the very early pictorial language of the Neolithic period in Europe or the art of some early central American cultures in which the simplified form is a symbol of fertility. Moore was naturally drawn to these images and whilst his figures are far more than simply maternal depictions, enduring memories of his mother - a tremendously strong woman who raised eight children and who represented a rock of stability for Moore - left a lasting impact on how he viewed the female figure. 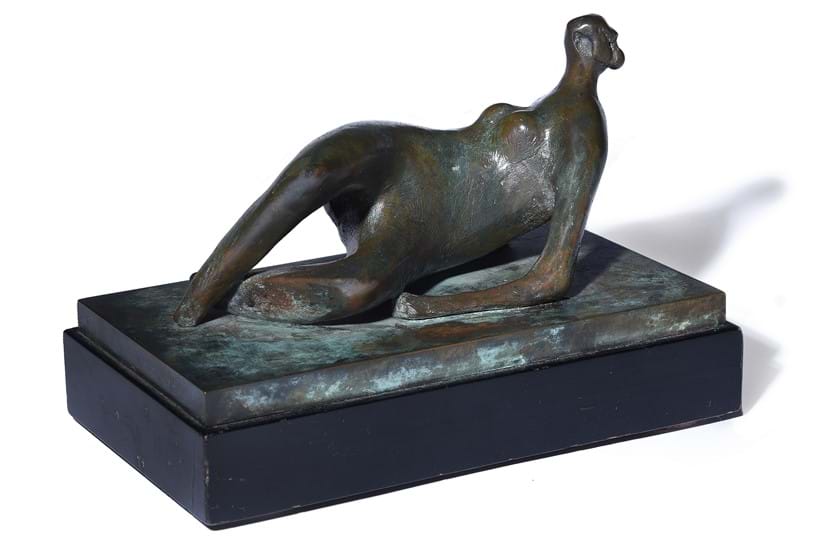 The present work is typical of Moore’s small scale bronzes. The smooth curves of the body dominate the form whilst the more diminutive head, with its lack of naturalistic facial characteristics alludes to a generic stylised form rather than a personalised image. Propped up on both arms, the body creates a contrasting mix of soft curves and sharper angles at the joints, interrupted by the lack of hands and feet. In spite of the simplification of the form the work remains more naturalistic than his earlier abstract sculptures.

We then have Lot 92, this rather unusual piece by Moore, titled 'Head of Queen (Study). This bronze with green patina was conceived in 1952 and cast in 1959 in an edition of two plus one artist's proof. Again this was bought for a private collection in 1974 from Finart Gallery Ltd in Johannesburg, South Africa.

Head of Queen (Study) is one of several preparatory works produced by Moore for the large-scale group sculpture King and Queen (LH 350). Both the studies and the final sculpture are unusual within Moore’s repertoire, representing a defined subject rather than the usual universal human form. They are also the only sculptures depicting a single pair of adult figures in Moore’s entire output. Moore himself offered up the following explanation, although others have suggested that the timing of the piece with the coronation of Elizabeth II cannot have failed to impress a certain interest upon the artist:

“The ‘King and Queen’ is rather strange. Like many of my sculptures, I can’t explain exactly how it evolved. Anything can start me off on a sculpture idea, and in this case it was playing with a small piece of modelling wax.... Whilst manipulating a piece of wax, it began to look like a horned, Pan-like, bearded head. Then it grew a crown and I recognised it immediately as the head of a king. I continued, and gave it a body. When wax hardens, it is almost as strong as metal. I used this special strength to repeat in the body the aristocratic refinement I found in the head. Then I added a second figure to it and it became a ‘King and Queen’. I realised now that it was because I was reading stories to Mary, my six-year-old daughter, every night, and most of them were about kings and queens and princesses.” Henry Moore in Henry Spencer Moore, photographed and edited by John Hedgecoe, words by Henry Moore, Nelson, London: Simon and Schuster, New York 1968, p.221 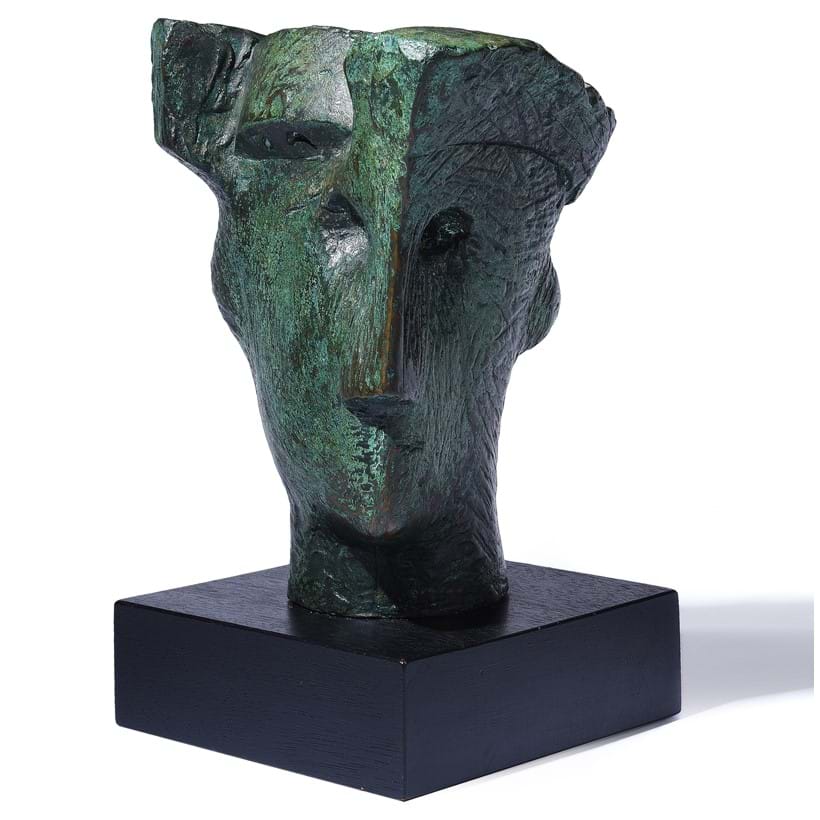 This small study shows the angular head of the queen perforated by a single hole in place of the eyes, its thin face has been extensively worked and scratched adding texture and depth to the surface. The Queen’s head used in the completed group sculpture was much softer and less angular than his preparatory studies. In the present work, Moore’s working process is laid bare as he experiments with both the form and the surface. Each mark a permanent memory of the artist’s touch, the present work has its own beauty and serves as a key insight into the development of an idea.

In 1968, Moore recalled that ‘the head of the Queen was a problem because it had to be in harmony and I made two or three different attempts at it before being satisfied.’ op. cit. p. 221. Moore felt it was important that the King’s head didn’t overshadow that of the Queen. The Queen’s head had to stand in unison with the strong and distinctive nature of the sculptural and angular King’s head, whilst still keeping her own sense of identity. One of the casts of LH349a is held in the public collection of Montréal Museum of Fine Arts, Quebec, Canada, a gift of Dr and Mrs Max Stern in 1984. The plaster is held by the Henry Moore Foundation.