Dreweatts' flagship Fine Jewellery, Watches and Silver auction on 27 November offers timely gifts for both ladies and gentlemen this Yule. Alongside classic pieces from Patek Philippe and sports watches from Rolex and Heuer, find a number of rare and unusual watches to give stylish loved ones a sophisticated surprise in their stockings this Christmas. 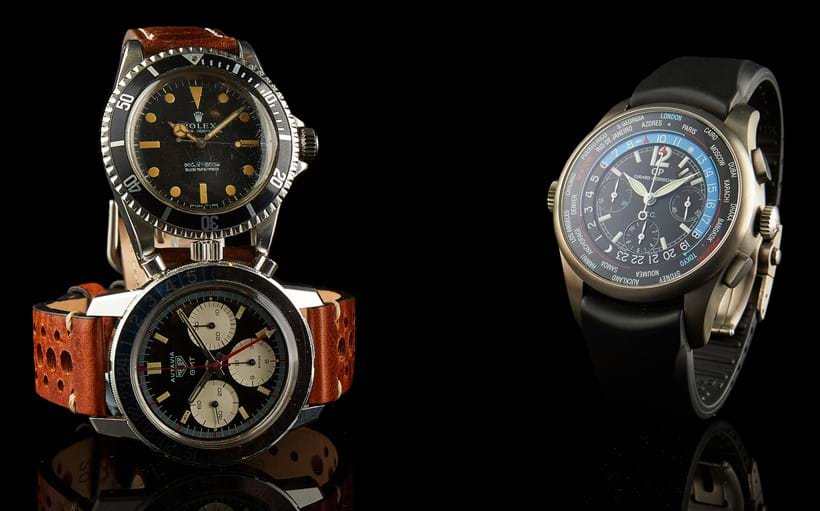 In 1970 Chaumet bought the Breguet brand without a clear direction for its watchmaking future. 1975 they decided to start work resurrecting this legendary name and so the style of watches began to evolve with input from designers and watchmakers such as Gerald Genta and Daniel Roth amongst others. At the same time manufacturing was established in the Vallee de Joux in Switzerland. Watches from this period represent the first examples of the ‘Classique’ line that has become synonymous with modern Breguet. The example offered here is from 1978 and would have been produced in very low numbers; the Breguet archive estimates no more than 20 pieces in total. 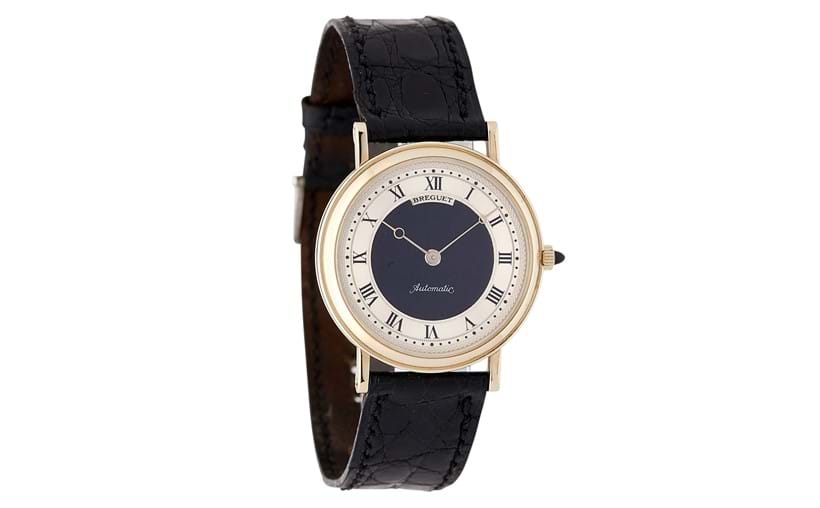 Created as a cushion-form version of Van Cleef & Arpels’ classic PA49 gentleman’s dress watch, this piece hides a secret behind its plain numberless dial. The name on the case back and movement is Gerald Genta – superstar designer and father of watch icons, with his ultra-slim automatic movement calibre 760 being based on the high-grade Frederic Piguet 70P family.

The case is remarkable, in that it brings together two brands with a strong interest in the use of wood for watches. Van Cleef & Arpels had produced jewellery featuring wooden elements since 1924 with the launch of their ‘Touch Wood’ rings – following the tradition of touching wood for luck – as the saying goes…. Genta was also interested in wood, using it for a number of watches designed for VCA as well as for Bulgari, both companies receiving a watch that featured his trademark screwed bezel. He also designed wooden dials for Concorde and under his own name. 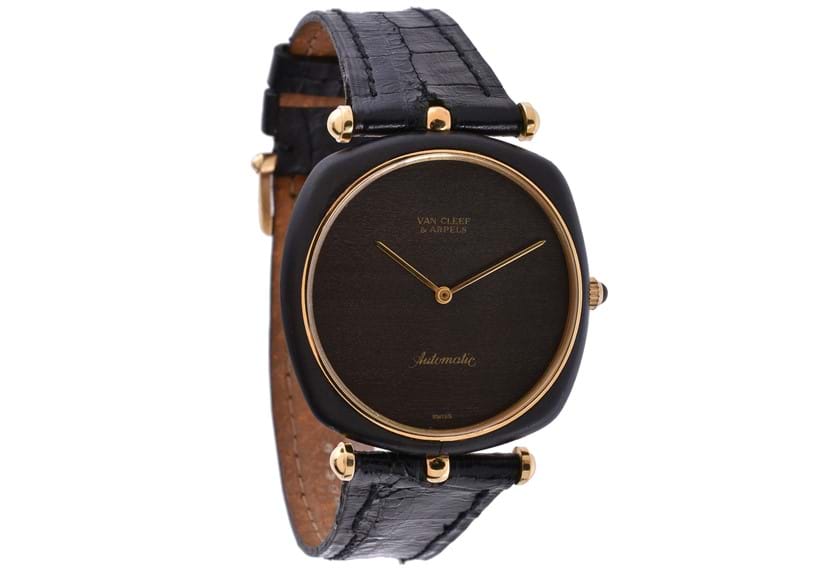 In the late 1930s as Germany moved from a quasi-civilian to a military footing, the Reichs-Luftfahrtministerium commissioned the watch that would become the Beobachtungsuhr (B-uhr) or Navigator’s watch. The large size case accommodated a precision pocket watch movement, each one featured a Breguet balance spring, a soft iron core surrounding the movement to protect against magnetism and a hacking mechanism to allow watches to be synchronised.

Type A watches had only an outer chapter ring but Type B watches such as this one, produced from 1941 onwards, had an outer ring for minutes and an inner one for hours. The stamp on the side of the watch is the requisition number Fl meaning flieger and 23 designating a navigation watch. 5 manufacturers supplied B-uhr watches to the Luftwaffe: IWC, A Lange & Sohne, Stowa, Laco and Wempe. Only Laco and Lange used German-made movements, with Lange employing their chronometer-grade calibre 48.1 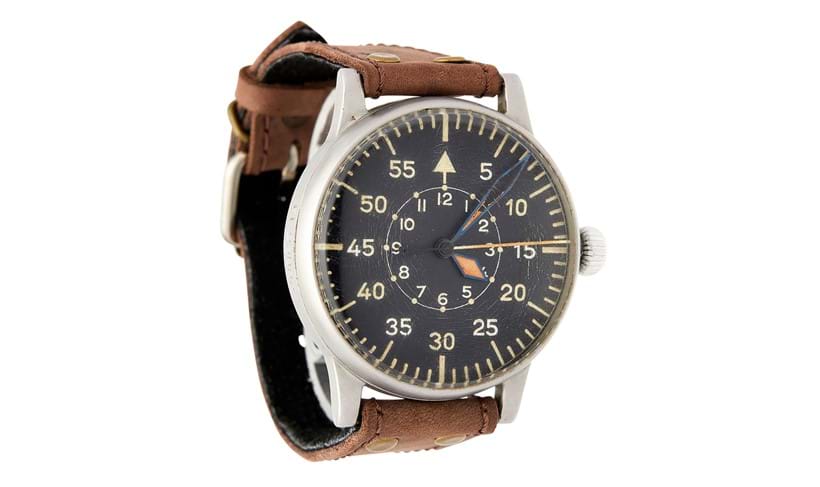 The Patek Philippe calibre 27-460 was released in 1960 as an upgrade to the brands first ever attempt at its own in-house automatic calibre. In this movement, all the problems of its predecessor were addressed, resulting in a calibre that is massively over engineered, being 27mm wide and 4.6mm thick, but lavishly equipped and beautifully finished. A Gyromax balance finished off this horological work of art that would go on to power Patek Philippe watches for the next 25 years. Back in the 1960s and 1970s, exhibition case backs were unknown and so to help retailers demonstrate the new calibre to prospective clients, display samples were produced complete with a signed loupe so that the smallest details of the movement could be seen and appreciated. 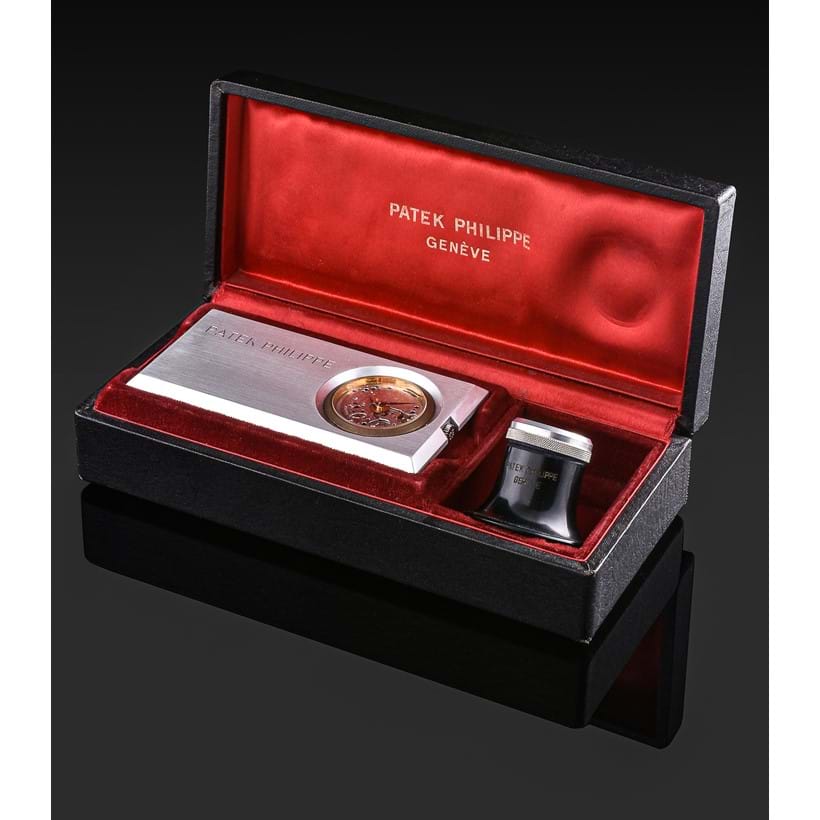 Dive watches with their robust construction and utilitarian styling have proved to be amongst the most collectable of all vintage watches. While most are simple three-handers, the Jaeger-LeCoultre Polaris adds the highly desirable alarm complication. The concept first came to light with the 1959 Deep Sea Alarm, but the Polaris as we know it today was launched in 1963 with 50 prototypes, 500 units were produced in 1965 and 1714 were produced in total.

The first watches were made with a double case back, the outer skin being nickel-plated brass for better alarm resonance. The outer skin was susceptible to corrosion from both sweat and seawater and contact with the wrist muffled the alarm so a triple case back was created with a perforated steel outer layer to let the sound out. The case was ‘compressor’ style meaning that the deeper the watch went the greater the water resistance. The original crowns are distinguished by their cross-hatch decoration, without a circular border. Early examples of a Jaeger-LeCoultre Polaris are rarely found in such good condition especially with the appropriate box and guarantee papers. Being one of the 500 watches produced in 1965, this example has the correct early double case back. The dial has been changed for the distinctive 1968 version at service. 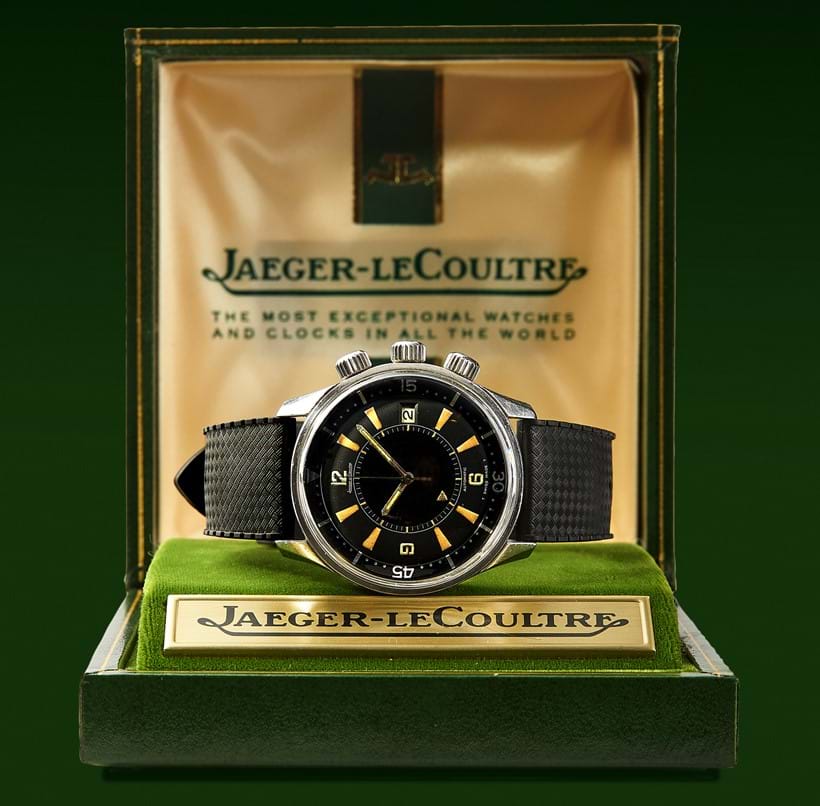