Dreweatts Modern and Contemporary Art sale features works from the 20th and 21st centuries, ranging from traditional modern British paintings and works on paper, mid-century sculpture and prints through to contemporary photography and installation. With works at every price point, there is something for every level of collector. Jennie Fisher, Head of Modern and Contemporary Art, takes a look at the highlights ahead of the auction on 22 October.

Highlights include a large-scale canvas of Central Park by New York based British artist Bill Jacklin (Lot 53), a typical post-Impressionist painting of St. Tropez by French artist Charles Camoin (Lot 143), and a significant work from his Clare Island Cycle by Irish painter John Shinnors (Lot 15), as well as a landscape by Australian artist David Boyd (Lot 110). The sale concludes with a mesmerising laser installation by light artist Chris Levine (Lot 315).

Royal Academician Bill Jacklin initially studied graphic design before going back to painting, firstly at Walthamstow School of Art and then the Royal College of Art between 1964 and 1967.

Whilst his early work centred on abstraction, from the mid-1970s onwards Jacklin moved towards figuration with a particular pre-occupation with the interplay between light and shadow and movement.

Jacklin was elected Royal Academician in 1991. 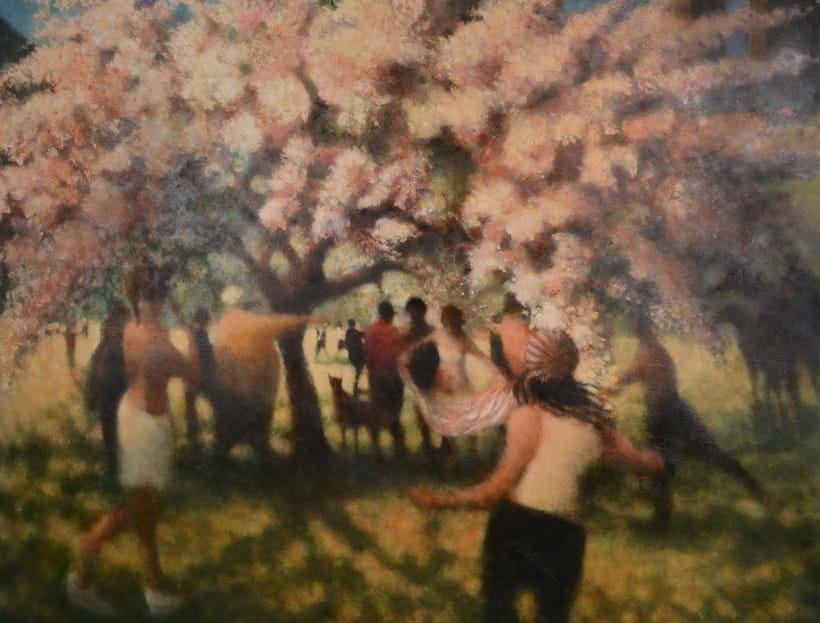 The present work depicts Great Lawn, Central Park in New York. Jacklin moved to New York in 1985 where he focussed on producing 'urban portraits' of city life in all its different forms. Jacklin's depiction of Great Lawn owes as much to classical painting and influence of the French impressionists as it does to late the 20th century. His flowing, almost dreamlike figures, so reminiscent of Seurat's pointillist figures from over a century before, endow the work with a timeless quality. The artist captures a moment in time, the blurred figures suspended momentarily, the artist an unseen observer capturing that moment before the characters move along. In her essay from 1999, Phoebe Hoban asserts that Jacklin is "obsessed with the choreography of the moment; its blurred geometry of motion, its fleeting waltz of time." (from The Connected Vision, Marlborough, New York catalogue). The scale of the canvas in Cherry Tree with Dog, Great Lawn serves to envelop the viewer in the scene, inviting us to immerse ourselves for a moment in their world, whilst always remaining an observer.

This work was acquired by the current owner from the Marlborough Fine Art gallery in London.

Born in Marseille in 1879, Camoin studied firstly in his home city before moving to Paris in the 1890s to study under the influential and controversial Symbolist painter Gustave Moreau at the Ecole des Beaux-Arts. Here he met some of the artists who would go on to define French painting in the early part of the 20th century, including Henri Matisse, Albert Marquet, Henri Manguin, Andre Derain and Maurice de Vlaminck. However, it was a move to the south of France in 1900 which was instrumental in defining Camoin's artistic career. Following in the footsteps of Van Gogh and Gauguin, he painted many of the places that they had frequented and, moving to Aix-en- Provence, he met Cezanne whose influence was key in developing Camoin's colourist style. 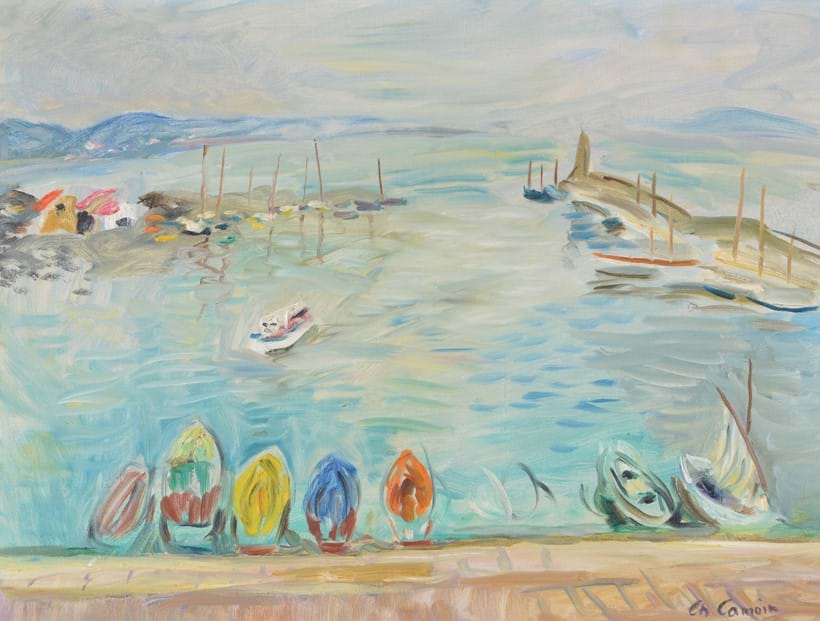 Alongside his former fellow students, Camoin became part of the group known as the 'Fauves'. Headed up by Matisse and Derain, the group prioritised the bold use of colour and line over representation in an extension of Van Gogh's painterly style of the 1880s. During this period, Camoin produced some of his most memorable work and although the Fauvist movement as such was relatively short-lived with only three exhibitions between 1905 and 1908, the principles of the group remained with Camoin for the rest of his career.

The present work dates from a later period in Camoin's life but the fresh palette and importance of colour remain evident. Having settled in Paris and St. Tropez with his wife, Charlotte (Lola) Prost, the landscape and coast of the south of France remained at the centre of his artistic output. Camoin exhibited widely in France and his works are in the collections of the Musee d'Art Moderne de le Ville de Paris and the Centre Georges Pompidou as well as many regional museums.

This work comes to us from the Collection of the late Ian Mylles, East Sussex. The authenticity has been confirmed by Madame Anne-Marie Grammont-Camoin and will included in the forthcoming Charles Camoin Catalogue raisonne currently being prepared by the Archives Camoin.

Born in Limerick in 1950, Shinnors spent time in the early 1970s studying at the Limerick School of Art under influential local artist, Jack Donovan. Combining juxtaposed abstract shapes with familiar motifs such as lighthouses, cattle, sheep, scarecrows and kites, the present work is a seminal example of Shinnor's bold expressive style. He is known for his three-tone colour schemes executed on a large scale and his use of contrast with light and dark pigments lend both balance and a sense of pattern to his work. He has cited Rembrandt and Vermeer as central to his understanding of the interplay between light and shade.

Shinnors developed his mature abstract style in the early 1990s moving away from a more realist approach of earlier years. The emblematic kite has since become a recurring theme in his painting and, as the artist himself explained, one that was central to his artistic development: '...I was in Kilkee, out on George's Head. It was a miserable day, with a grey mist over everything. Looking down, there was a tiny white figure moving against the rock, and I saw a flash of yellow in the sky. It was a child playing with a kite, and something clicked. It had all the elements - the human presence, air, sky and sea, a kind of dynamic interaction, and me, an interpreter, which is what I count myself as now...' (Shinnors in conversation with Aidan Dunne, John Shinnors, Gandon Editions, Kinsale, 2002, p.18). The present work, painted in 1998, on the mountainous Clare Island off the coast of County Mayo, returns once again to the powerful image of the kite - in its monumental form, the kite whilst always recognisable, becomes one with the harmonious juxtaposition of shapes and forms that complete the composition.

Shinnors has exhibited widely across Ireland, represented by Taylor Galleries in Dublin. His work is held by numerous public and private collections such as the Arts Council of Ireland, Ulster Museum, Belfast, Limerick City Art Gallery and the National Self Portrait Collection. He has also been involved in supporting the visual arts in Ireland with the Shinnors Scholarship for an MA in Curatorial Studies in partnership with LIT, LSAD and Limerick City Gallery of Art and the Shinnors Drawing Award at LCGA.

David Boyd (1924-2011) was one of the most iconic and significant Australian artists of the 20th century whose talent strengthened the family's artistic dynasty. Boyd's primary focus was colonial history and he created many works relating to the history of aboriginal Tasmanians in Australia. Some of these works caused controversy amongst contemporary Australian critics but his fluid landscape paintings captured emotion through colour and became renowned with the Boyd artistic dynasty. Through splashes of colour the artist has captured the children playing in the pass through the mountains creating an almost dreamlike effect with white cockatoos swooping down around their heads. Boyd loved to experiment and discovered a method of using candle flame in 1966. He named the technique Sfumato, inspired by Leonardo da Vinci who had used the word to describe graduations of misty tones.

In 1985 the present work was exhibited in Paddington, New South Wales by the Wagner Art Gallery in their exhibition 'Four Seasons'. Subsequently, it was purchased by Rear Admiral Sir Joesph Henley KCVO CB. Thence by descent it was given to the present owner in 1999.

Rear Admiral Sir Joseph Henley KCVO CB and Lady Henley moved permanently to Sydney in the late 1960s after his retirement from the Royal Navy. His final naval appointment was as the Flag Officer Royal Yachts (FORY), in command of HMY Britannia 1961-1965. 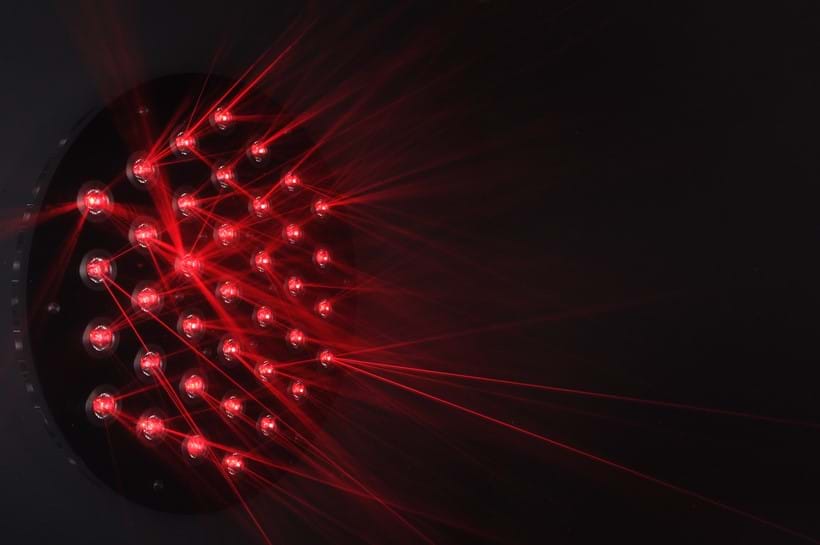 The Flower of Light is created with electronic lasers injected through Swarovski crystals to project light forms around the surrounding space. The work takes on three stages of life each one as mesmerising as the last. When the installation is turned off the Swarovski crystals suspended in the bulbs glisten in the day light. The beautiful construction represents the cycle of creation and symbolises perfect form, harmony and proportion. Then the lasers are switched on and the viewer is transported into a completely different dimension. Stood in front of the Flower of Light is a completely captivating experience which transfixes the viewer in an experience of stillness and a moment of calm. This meditative and almost spiritual aspect to Levine's work is very important, who finds strength and peace in meditating for up to two hours a day. Through his work he strives to increase the awareness of the essence of light and how we as human beings live in and amongst every possible form of light and energy, which is fundamental to our existence. The final stage is the haze machine which pumps homogenous clouds suspended in the air which creates an immersive matrix of beams. Levine uses these powerful, strong, red lasers to create a work that is not only mesmerising but also experiential. It draws our attention to the present moment and helps to set our minds to the now, falling into a state of meditation and focus.

'Light is Fundamental to our Existence' - Chris Levine (British b. 1960)

The present work was acquired by the present owner from The Fine Art Society in London.