Joe Robinson, Head of Sale, selects 6 of the most interesting discoveries from the collection of Sir William Whitfield CBE - from a group of Roman heads from Palmyra to a set of chairs possibly from 10 Downing Street.

The concept of the true connoisseur is something largely forgotten in today's art market. It is now rare for collections to come to market which have undergone such rigorous curation and research by its owners. 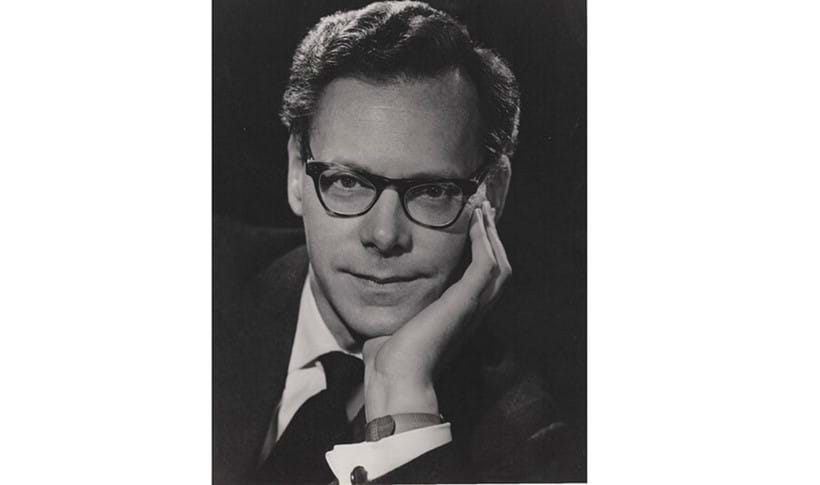 The Collection of Sir William Whitfield CBE offers an insight into the collecting passions and deep knowledge of a man who spent his life 'building', whether it be important civic and religious buildings or his own personal collection.

The Whitfield sale on 10 & 11 March at Dreweatts celebrates these collecting passions, elicits the wide-ranging interests by both him and his partner Andrew Lockwood, and offers choice discoveries from over five centuries of design and 60 years of dedicated collecting.

The sale itself ranges from the academic to the more decorative, an homage to the concept of buying for pleasure. Here, I select 6 of the most interesting discoveries from the collection. 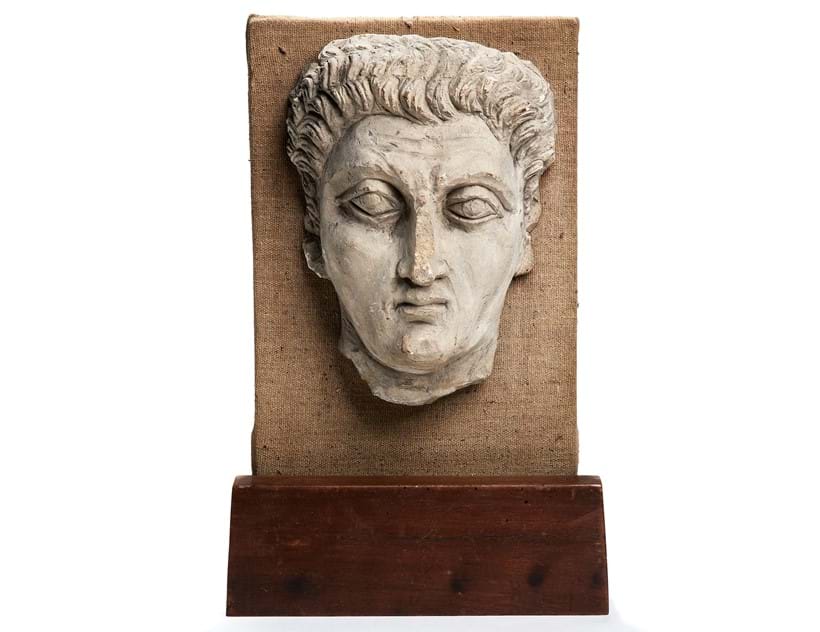 The five Roman portrait reliefs in this sale likely originated in the prosperous city of Palmyra, present day Syria, and were collected by Sir William as a child in Newcastle in the 1940s. Palmyra's location by an oasis ensured the year round presence of water in an otherwise dry region. This made it a beneficial connection and important trading post between the Roman and Partian Empires. Often considered a forerunner of Byzantine art, the distinctive style of Palmyrene portraiture is a synthesis of Greco-Roman, local and Partian traditions. These portraits, lots 145-149, are probably fragments of funerary busts, made to adorn burial niches in large and elaborate family tombs. In 1940 during the Blitz in London a bomb narrowly missed No.10 Downing Street but caused extensive damage. Winston Churchill therefore demanded the house be stripped of its furniture and pictures, where it stood almost empty throughout the war. The extent of the damage was captured by a series of images published in national publications. Whilst these chairs are of 20th century origin, it is quite possible that Downing Street was in fact furnished in 'style' furniture as documented in A Survey of London in 1931. This is due to the general disregard given to the house as the official home of Prime Ministers during the 19th and early 20th centuries. Thus it is probable they looked for a more economical option to furnish the rooms which still ensured the style was befitting. Indeed, interior shots show a furnishing change in the Pillard Room between 1907 and 1921.

As No.10 became more seriously considered, in 1954 a new set of Kentian chairs were purchased from Compton Place, Eastbourne, for the Pillard Room with the present set appearing to have disappeared. No longer in the Government's collection, it is quite possible that the missing chairs are indeed the chairs which were the ones offered and bought by Sir William Whitfield at the Christie's South Kensington Sale in the 1980s and are now offered in this fascinating sale (Lot 311).

It was with great delight that I sat with Andrew Lockwood during the photo shoot week, pouring over the pages of research they had undertaken over the years. I heard how they discovered the origination of these panels in an article in a local newspaper article. The article asked for information on the whereabouts of the missing panels from Lartington Hall. Delighted to assist, Sir William and Andrew duly informed the writer of what they had in their possession. It would later transpire that the maker of these was Anton Leone Bulletti, the master carver who served the Duke of Northumberland at Alnwick Castle between 1855 and 1860. Lartington would be one of the first commissions received by Bulletti after setting up shop in Newcastle. The works included a grand entrance corridor and port cochere completed in 1863, for which the owner commissioned Bulletti to make twelve foot high mirror frame and a series of carved wall panels including Lots 248, 248A, 248B and 248C and whose sketches are now held in the V&A. Unike the style of his work at Alnwick, Bulletti's work at Lartington was heavily influenced by the carvings of Giuseppe Maria Bonzanigo who produced carvings for the Royal palaces in Turin during the 1780s. 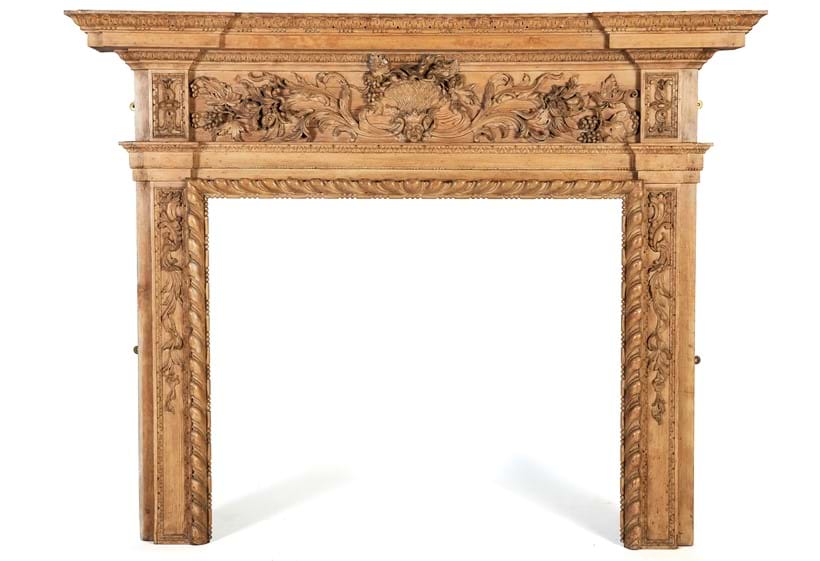 During his lifetime Sir William was involved in many efforts to save country houses from demolition. This meant he was able to build up a rich visual memory of lost houses and their architectural details. In the early 1950s, Halnaby Hall was one such example. The house was built in 1616, allegedly from designs by Inigo Jones and was renowned as the setting of Lord and Lady Byron's dismal honeymoon, disparagingly referred to by him as his 'treaclemoon', in 1815.

Unfortunately Sir William's campaign failed and Halnaby was demolished in 1952. Its fixtures and fittings and even entire rooms were amputated and sold off. Years later Sir William spotted this chimneypiece for sale and instantly recognised it as having been from the bedroom in which Lord and Lady Byron had stayed. This is corroborated by the Henry Spencer & Sons catalogue entry.

Therefore, an object which, by most, is seen to enhance any romantic atmosphere, in fact, presided over perhaps one of the most romance-less evenings in history. Through his characteristic impulse to buy what interested him, Sir William had bought a piece of architectural history swathed in playful irony (Lot 383). The present lot (Lot 318) was probably supplied by ‘Mr Bogaert’ to Thomas Hope for the ‘Third Room for Greek Vases’ at Duchess Street illustrated in Thomas Hope, Household Furniture and Interior Decoration, 1807, pls. V and XXIX. This bordered three of the walls, excluding the fireplace, and had just two ends to the design. The decoration included scrolling anthemions to the corner and to the front of the Greek key motif of the toprail – in the present examples there are shadows of these designs visible to the ends of the design, indicating their former presence in applied carving, ormolu, or brass mounts as clearly shown in the illustration.

In 1917 Hope’s collection was dispersed in a great sale at The Deepdene, where these sofa ends were sold, lot 1059. In 2008 they were illustrated in the Victoria and Albert Museum’s exhibition catalogue on Thomas Hope as ‘probably’ having come from the Third Vase Room at Duchess Street. However, a research trip to the National Art Library confirmed what we had hoped. Therefore it is really quite exciting to have objects belonging to the designer synonymous with Regency design in a sale celebrating the connoisseurship of Sir William Whitfield. The present work (Lot 35) is one of seven bronze sculptures that Epstein produced of Kathleen and one of the largest and most accomplished. Sir William was a personal friend of Lady Epstein, Sir Jacob’s second wife, and this example, which was her personal copy, was acquired at the time that she sold the Hyde Park Gate studio in 1965 and moved to Elm Park Gardens.