Running until Friday 14 October, we have our Art Online auction. This is a timed online auction showcasing works from the 18th century through to the contemporary. With prices from £40-2,000 (+ fees), this is a fantastic platform to either start an art collection or grow an already established one. Highlights include works by Edward Seago, John Skeaping, Augustus John and Samuel Lamorna Birch.

There is a strong selection of orientalist works which include two views by Augustus Osborne Lamplough, a view of the Nile by Frank Catano, as well as an intimate study by Anthony Eyton of the Wailing Wall in Jerusalem. Another group of works to watch is the abstract compositions by French artist Dikran Daderian which are particularly striking and a rarity on the British market. Here, Picture specialist, Francesca Whitham, picks out five works for under £1,000.

1. 'Figures by Goodrich Castle' by Thomas Baker of Leamington

Firstly, we take a look at Lot 43, Figures by Goodrich Castle by Thomas Baker of Leamington (British 1809-1869). This work is recorded in the artist's diaries as no. 202 together with a small and very sweet sketch of the work. It is detailed that the work was sent to Manchester on 13 May 1843 and 'Sold at Manchester' for £8 including frame.

Thomas Baker was born was born in Birmingham in 1809. He exhibited regularly at the Birmingham Society of Artists and produced views in Warwickshire and the Midlands. Goodrich Castle is located in Herefordshire and is a Norman medieval castle. The figures shelter in the shade of the large rock in the foreground peering round to the historic and impressive ruins that loom above them. 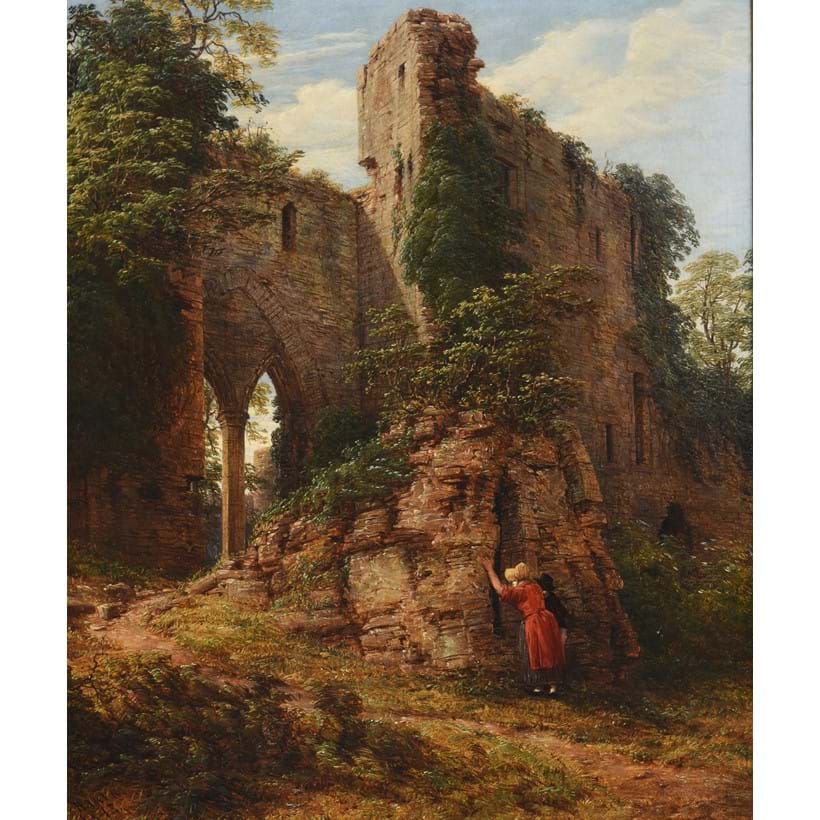 This Art Online auction offers a rare opportunity to own a portrait by esteemed landscape artist Edward Seago (Lot 78). The present lot depicts comedian and actor Cyril Fletcher best known for ‘Odd Odes’ which became a part of the show ‘That’s Life!’. The work contains the same emotive brushwork and subdued colour palette associated with Seago’s landscapes depicting views across Holland and Norfolk. Fletcher’s slight smirk oozes from the canvas, drawing in the viewer closer to this intimate portrait. Once owned by Arthur Ackermann and Peter Johnson, the work went up for auction at Christie’s in 2008 included as part of their collection sale. At £600-800 (+ fees) this is a lot to watch and an interesting addition to any Seago collector’s collection. 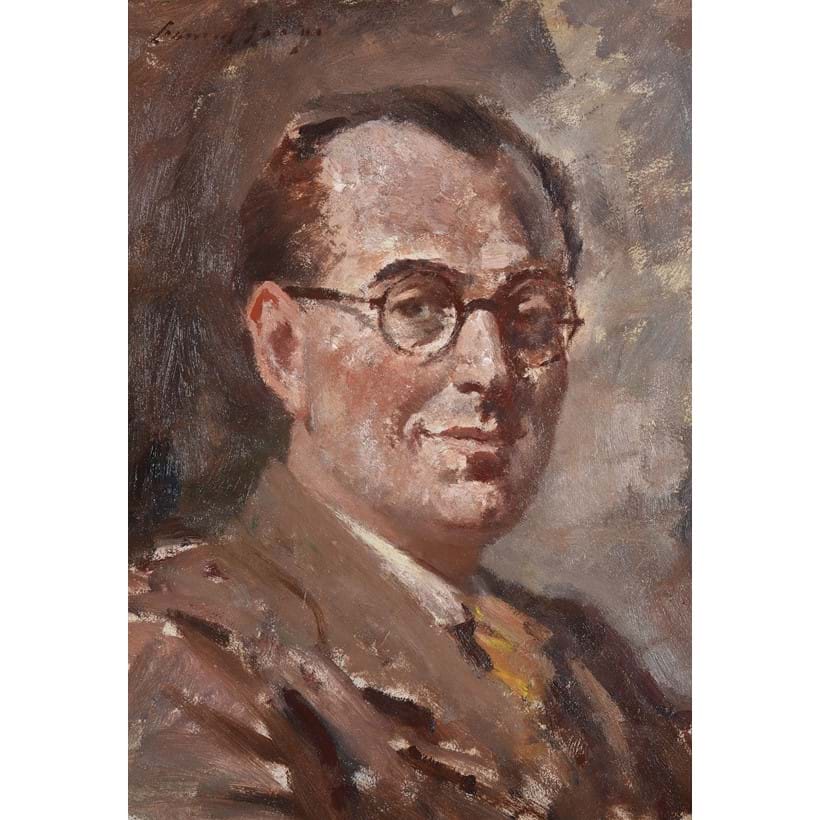 This stylised and emotive study of a figure reading (Lot 121) is a magnificent example of Csato’s work. Csato was born in Budapest in 1910 and went on to study in Berlin and Austria studying under Oskar Kokoschka and Otto Thiele between 1936-1938. During the Second World War, Csato, who was of Jewish heritage having escaped the Nazis was captured by the Russians and entered into a labour camp. He continued to paint whilst he was in the camp, mainly producing portraits of fellow inmates. It is recorded in his diary that during his time spent in the labour camps he was forced to paint a portrait of Stalin. His first exhibition was arranged by Jean Cocteau in 1948 with exhibitions following in London, Amsterdam, New York and Canada. A beautiful study that captures Csato’s move from realism into abstraction and his use of strong colour which creates beautiful juxtapositions between the bright blue and rich burgundies. 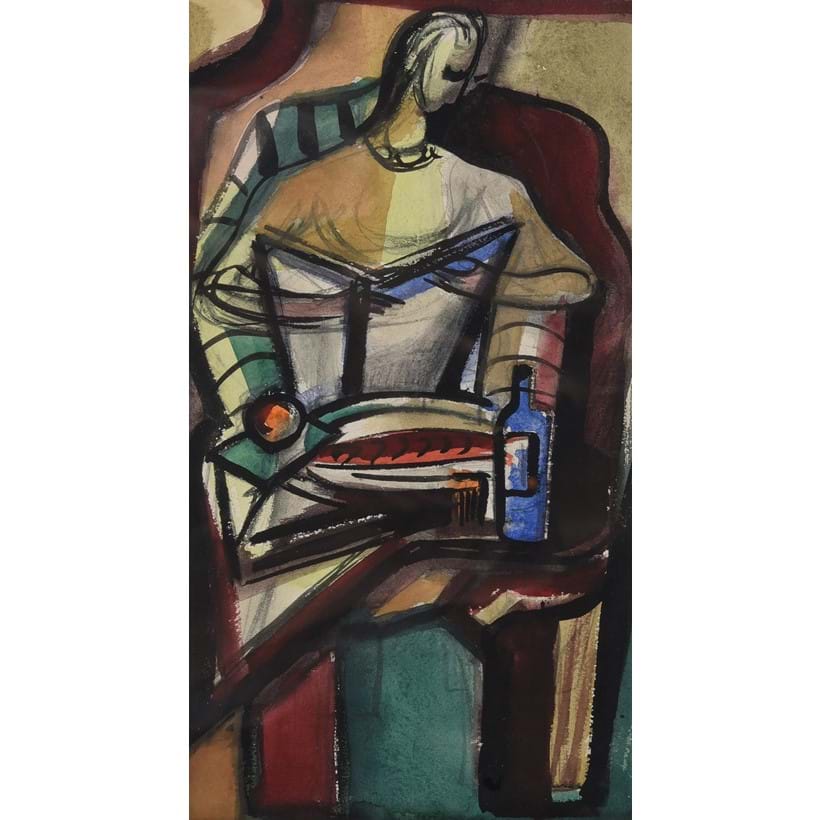 Stanley William Hayter is one of the leading figures in abstract expressionism. When he founded Atelier 17 studio in Paris, he became well respected in the field of print-making for his innovative techniques. Artists such as Jackson Pollock, Wassily Kandinsky, Pablo Picasso and Alberto Giacometti frequented the studio. The present lot (Lot 156) encapsulates Hayter’s fast moving, flowing and energetic compositions, which is matched by the vibrancy of colour. Dated to July 1944, this piece signifies Hayter’s move into experimenting with ideas of abstract expressionism as the vigorous lines leap off the page. 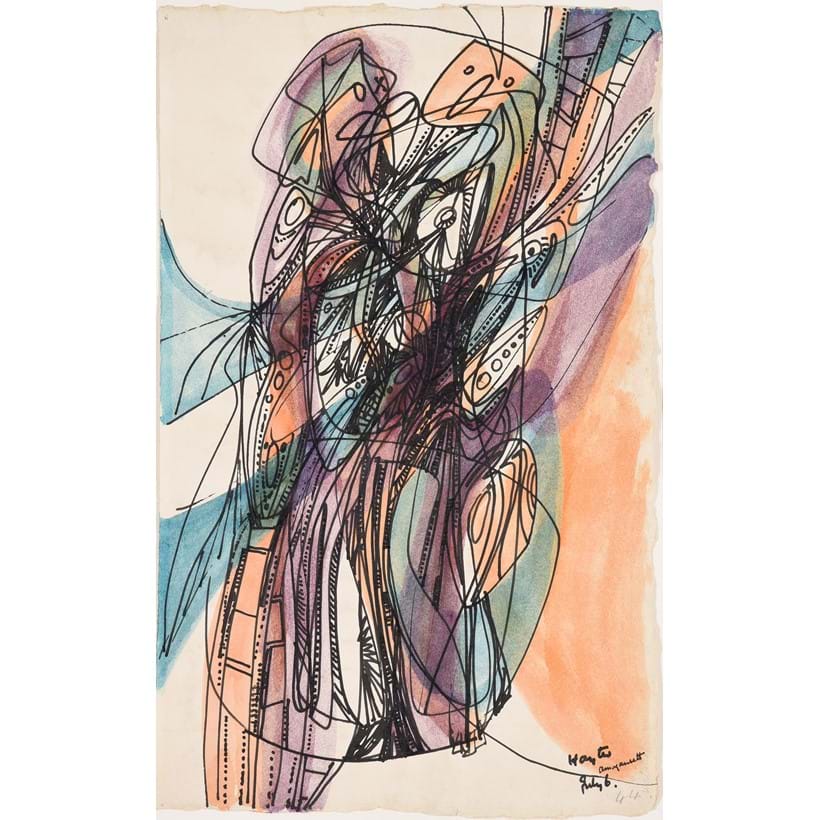 5. A selection of works by Dikran Daderian

Continuing on the theme of abstract expressionism, we are pleased to present a selection of lots by Dikran Daderian (Lots 157-164). The short brushstrokes layer up across the board in different colours to a crescendo in the middle. The abstract compositions remind one of a flock of birds flying in unison or a pile of delicate feathers.

Daderian was born in Beirut in 1929. In 1953 he arrived in Paris and studied at the Beaux Arts and the Goetz Academy, which he eventually went on to manage. 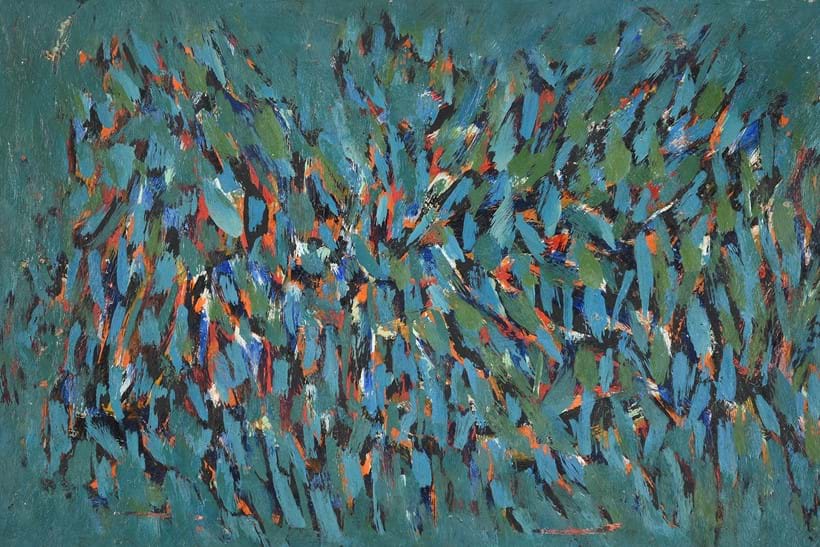 Remote Viewing is available by appointment from Monday 3 October. Our Remote Viewing Service allows you to view specified lots via your smartphone from the comfort of your own home at a time convenient to you. Find out more here.