Dreweatts are thrilled to present our two-day auction of Fine Furniture, Sculpture, Carpets, Ceramics and Works of Art on 30 & 31 May. Offering a huge variety of fine and rare pieces, the auction will also include three exciting private collections, including property from the Collection of The Hon. Catherine Mary ‘Kate’ Wass, OBE (1942-2021) (Lots 1-38); and property from the estate of the late Joe Constantine (Lots 301-353); as well as items from the London property of a former Australian Prime Minister (Lots 355-434); in addition to a number of other private collections. The auction will be presented at Kirtlington Park in Oxfordshire, using the sumptuous interiors to bring the pieces to life. Here we take a look at some of the highlights.

Lot 121 is a pair of George II carved pine eagle console tables, dating to circa 1740. These are made in the manner of Francis Brodie, each featuring a banded marble top.

The form of 'Jupiter' eagle console table, appropriate for a 'Roman' banqueting hall, recalls Ovid's Metamorphoses of the history of the shepherd Ganymede who was borne aloft by an eagle to serve as Jupiter's cup-bearer at the banquet of the Gods. The pattern may have been invented by Lord Burlington's protégé, the artist architect William Kent (d. 1748), who provided Roman eagles in his illustrations to Alexander Pope's 1725 translation of Homer's Odyssey. The Edinburgh cabinet-maker Francis Brodie featured a related eagle table on his tradesheet, published in 1739 (F. Bamford, Dictionary of Edinburgh Furniture-Makers, Leeds, 1983, pl. 24a). 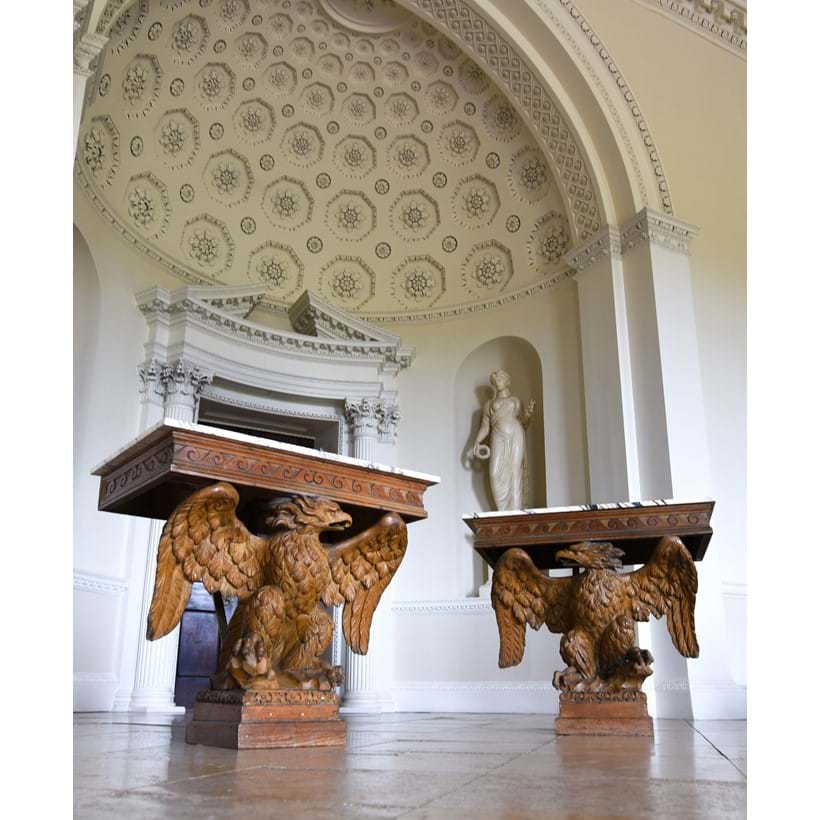 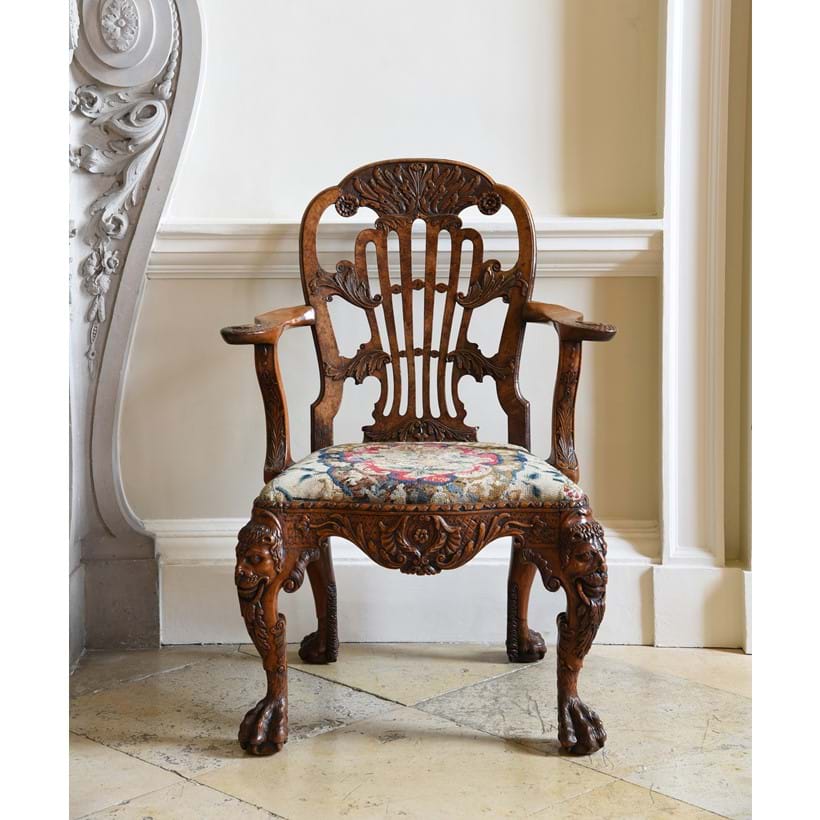 Whilst this armchair displays similar features to the Sandon Hall chair, such as the legs and compass seat, the exceptional piercing and carving to the back of this armchair and the carving to the arms and the seat rail seem more balanced with the quality and scale of the base.

Geoffrey Beard and Christopher Gilbert, Dictionary of English Furniture Makers 1660-1840, records: Daniel Bell 'St Martin's Lane, London, cabinet maker 1724-1734,...recorded in partnership with Thomas Moore as early as 1724 when the firm supplied goods to Benjamin Mildmay, Earl Fitzwalter for Moulsham Hall between 1724-34;  Thomas Moore is recorded as 'London, cabinetmaker 1734-d1738...at St Martin's Lane.  The younger James Moore, son of the Royal cabinetmaker, died in 1734, and it seems probably that Thomas was a member of the family who at that date or earlier had entered into partnership with Daniel Bell.'

Closely related chairs are seen in the 1741 painting by William Verelst of the Gough Family, and these Gerstenfeld chairs are also referenced as prototypes for an identical Chinese model in rosewood. The Victoria and Albert Museum, London, also has in it's collection giltwood seat furniture with some related features made circa 1730 by chair maker Thomas Roberts junior made for Robert Walpole, Houghton Hall, Norfolk. These Houghton sofas and chairs are carved naturalistically with lion's masks and lion's legs and feet.

A carved marble figure of 'The Medici Venus'

Lot 585 is an impressive carved marble figure of 'The Medici Venus'. Probably Italian, it dates from the late 19th century, and is  made after the antique. Venus is depicted here in the act of rising from the sea, with Cupid riding a dolphin by her side. 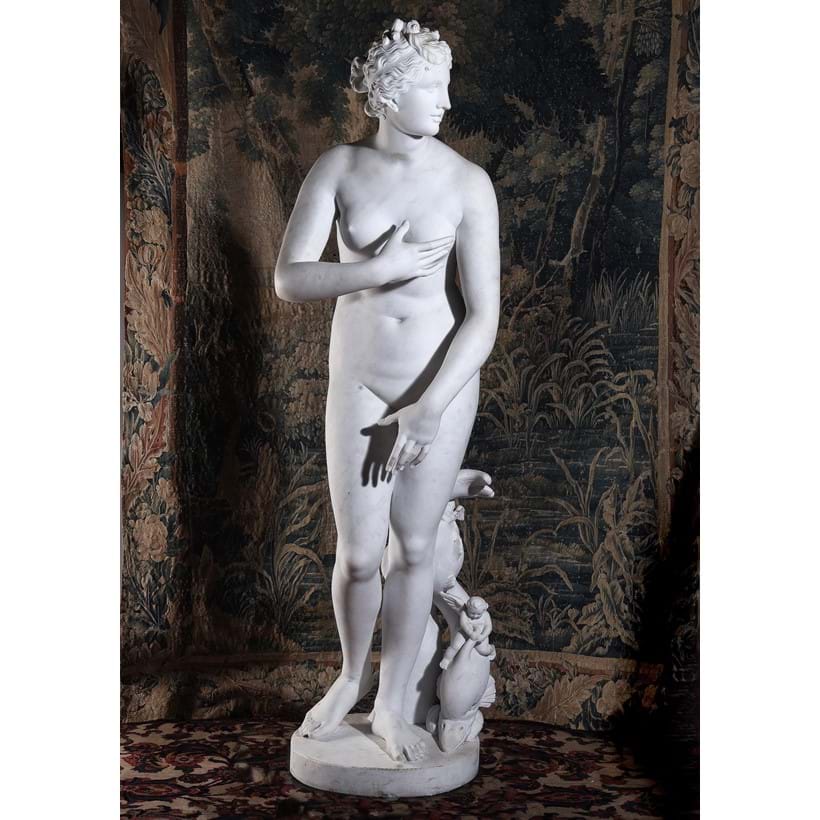 Whilst the discovery of the figure of the Venus de' Medici upon which this is based is unknown, it first appeared in the 1638 catalogue of works held in the Villa Medici collection in Rome. The original marble figure is thought to be a 1st century copy after an earlier Greek bronze figure, the dolphin to the side providing a support which the bronze would not have needed or had. After a brief Napoleonic interlude in Paris, it is now in the Uffizi Gallery, Florence.

Amongst the items from the London property of a former Australian Prime Minister, we have this Queen Anne black lacquer, japanned and silvered wall mirror, dated to circa 1710, unusually designed with carved and silvered mouldings, the divided plate is engraved with stars and spheres. 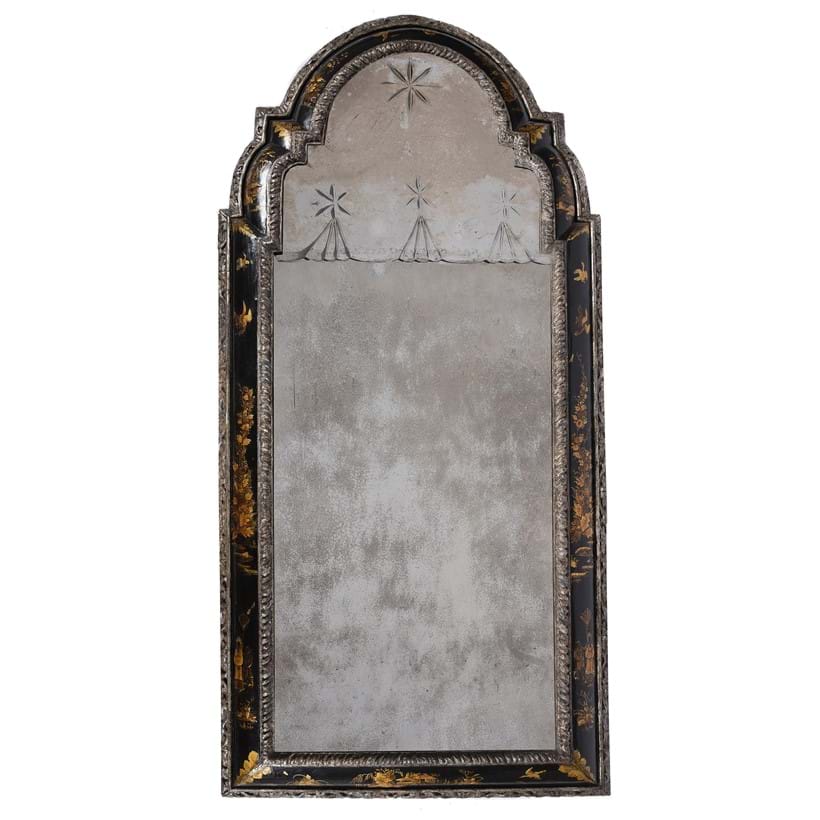 An Artist's Lay figure or mannequin

A rather interesting item is Lot 517, a rare life size carved artist's lay figure or mannequin. Made in England in the early to mid 19th century, it is of hinged articulated form, standing at 182cm high. 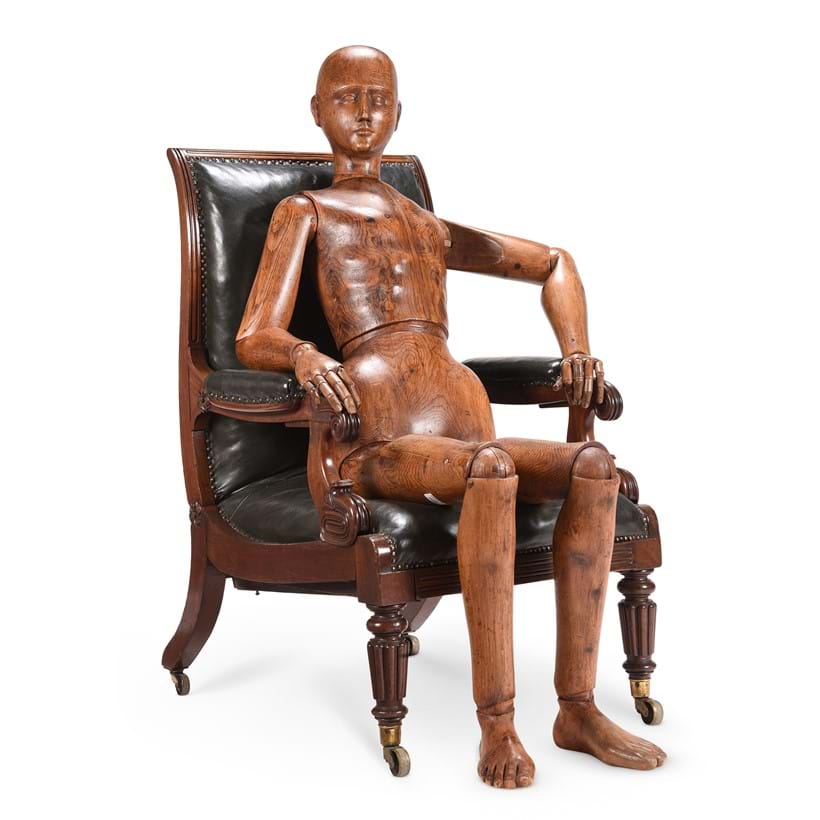 It was formerly from the collection of The School of Design at York and almost certainly either from the personal collection of the York artist William Etty (1787-1849) or from his teaching collection in the school.

The school had been established in 1842 chiefly through the efforts of William Etty and the head of the Central Council, and Etty's close friend, the Scottish artist William Dyce (1806-1864). It first occupied modest premises on Little Blake Street before moving to Minster Yard in 1848 where it remained for much of the second half of the 19th century until moving into the Exhibition Building in Exhibition Square in 1890. At some point Etty's easels and life studies and this life figure were stored in the loft.

In the early 1970s these items were removed from the loft and came into possession of the principal of the York School, Mr Dennis Donn. On his death in the 1990s the items passed on to the daughters of his student and later colleague and friend Reginald Williams. In 2018 the figure was sold to a Belgian Fine Art dealer and subsequently into a private collection in London.

Although much respected as a painter of grand paintings based on literary, historical, and mythological themes, William Etty was both a highly respected yet controversial figure in British art of the first half of the 19th century due to his penchant for specializing in the realistic, non-idealized depiction of nudes.

The auction also features property from the estate of the late Joe Constantine. Amongst the collection, there is a lovely selection of British and European ceramics, including Lot 301, a Bristol Delft 'Farmyard' plate, circa 1730. It is typically sponged and painted in shades of iron-red, ochre, blue and manganese with a cockerel and trees. It was purchased with labels from Jonathan Horne Antiques. 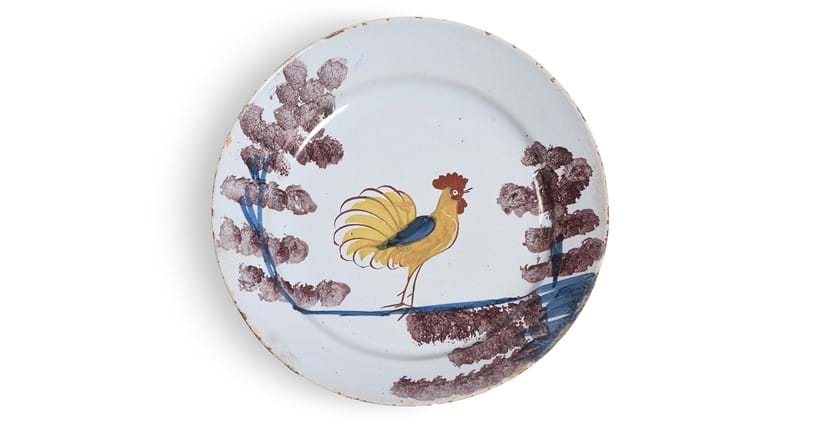 At the time that this was made, this was an everyday piece of tableware, made from relatively cheap tin-glazed earthenware. Porcelain at the time would have been prohibitively expensive and out of range of those without deep pockets. Looking at this plate with the hindsight of time, perhaps we might now call this an example of British folk art.

To kickstart the auction, we will be offering property from The Hon. Catherine Mary Wass, OBE (1942-2021). These items were inherited from the 7th Viscount Gort in 1975 from Hamsterley Hall, Co. Durham. A highlight is Lot 4, a set of nine George III mahogany hall chairs, circa 1780. They are variously painted with crests, and designed with saddle seats. 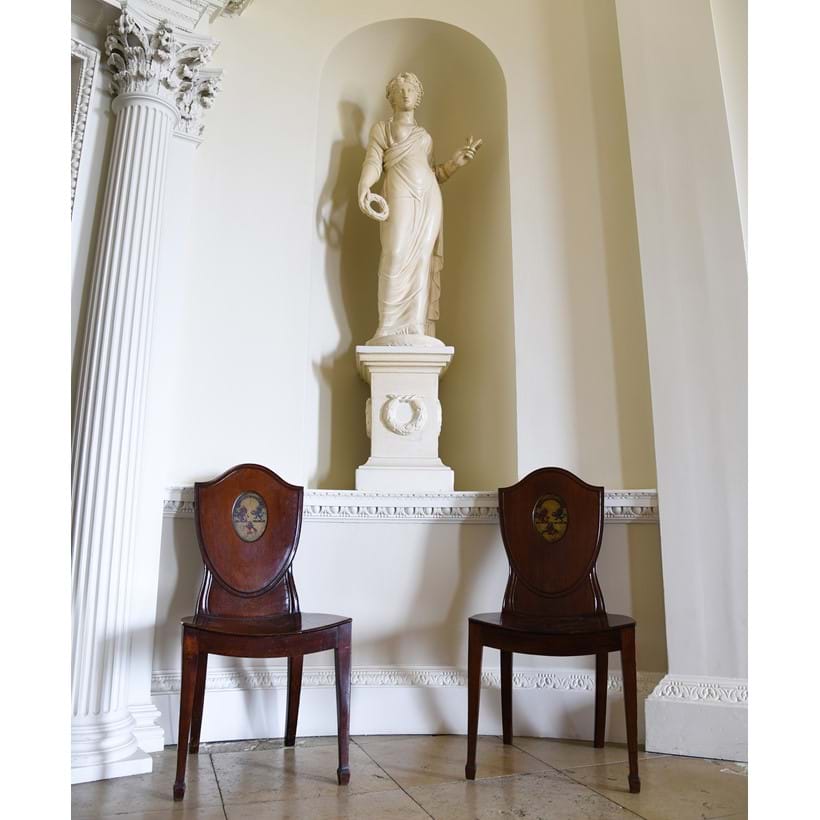 In 1972, a pair of near-identical chairs was shown by Country Life in the Entrance Hall of the private apartments at Penshurst Place (M. Binney, 'Penshurst Place, Kent - IV: The Seat of Viscount de L'isle, VC, KG', Country Life, 4 May 1972, p. 1091, fig. 3). It is therefore possible that chairs from this set were taken to Penshurst Place upon the marriage of The Hon. Jacqueline Vereker to William Sidney, 1st Viscount De L'isle and Dudley.

Henrietta Addles MOULTON-BARRETT was born at Hope End, Colwall Herefordshire the second daughter of Edward Emmanuel MOULTON later MOULTON-BARRETT (1785-1857) of Cinnamon Hill, Jamaica where he was a wealthy plantation owner, by Mary Graham CLARKE (1781-1828) daughter of John GRAHAM-CLARKE by Arabella Altham EBB. Most notably she was the sister of the writer Elizabeth Moulton Barrett BROWNING (1806-1861) who in 1846 had married the poet Robert BROWNING (1812-1889).