To kick start our December auction calendar, we have our Fine Furniture, Sculpture, Carpets, Ceramics and Works of Art auction on 1 December. The auction features a superb range of items with pieces by true master makers, as well as items with wonderful provenance having once furnished stately homes and country houses throughout the United Kingdom. Here we take a look at some highlights.

To start we have Lot 54, this Tabriz carpet, of Safavid Ardebil design. This carpet was previously part of the furnishings of Wentworth Woodhouse in Yorkshire. A photograph reveals it to have previously been placed in the dining halls there. 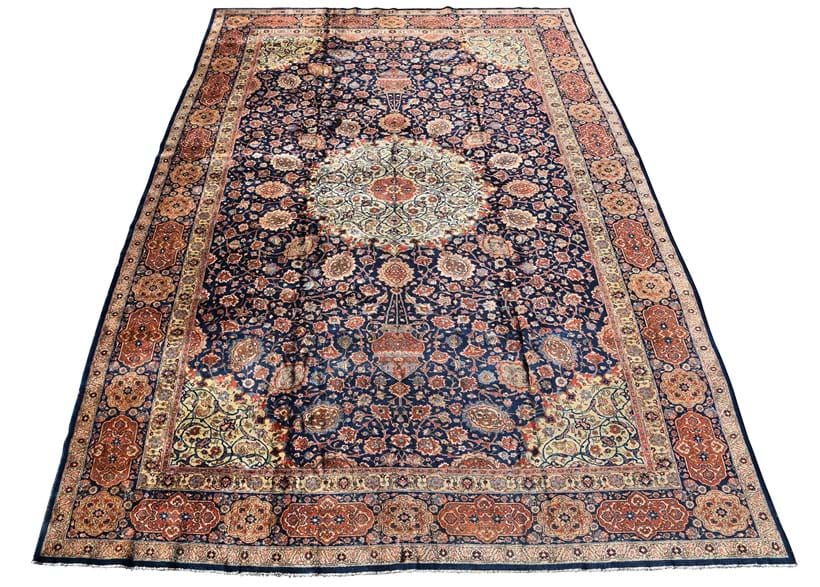 The original Jacobean house of Wentworth Woodhouse was rebuilt by Thomas Watson-Wentworth, 1st Marquess of Rockingham (1693-1750), and vastly expanded by his son, the 2nd Marquess, who was twice Prime Minister, and who established Wentworth Woodhouse as a Whig centre of influence. In the 18th century, the house was inherited by the Earls Fitzwilliam who owned it until 1979, when it passed to the heirs of the 8th and 10th Earls, its value having appreciated from the large quantities of coal discovered on the estate.

From a private collection in London, we then have Lot 78, a William & Mary walnut and 'seaweed' marquetry bureau. Dating to circa 1690, this is possibly by Gerrit Jensen. It was once exhibited in the Bath Assembly Rooms in 1973, in their exhibition International Treasures. 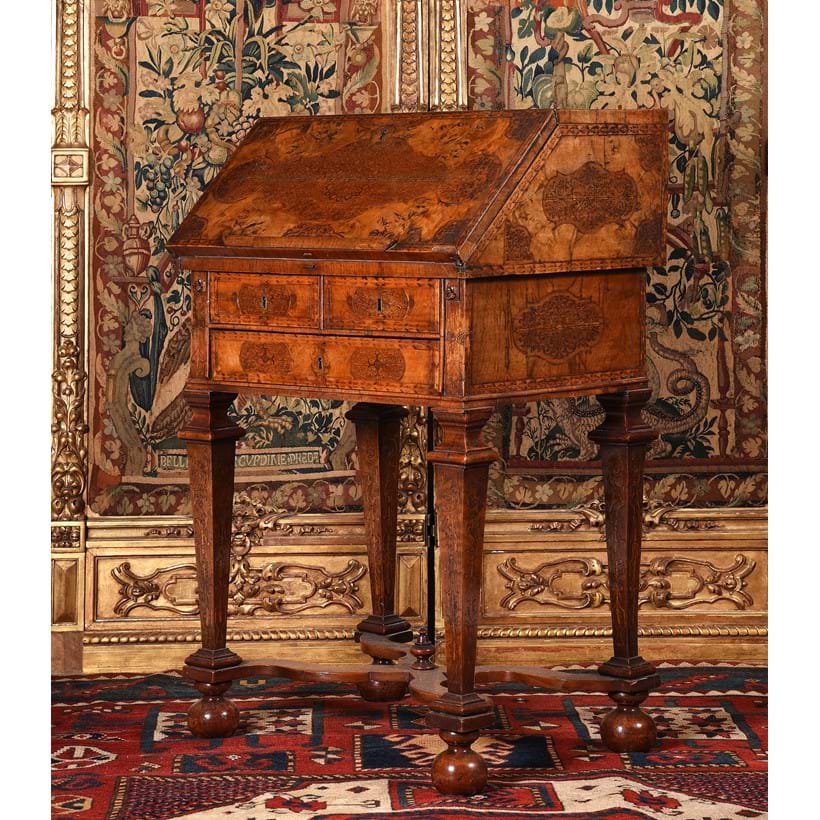 Born in Holland and trained in Paris before settling in London, Gerrit Jensen (fl. 1667 - d. 1715) was arguably the most important cabinet maker in England during the second half of the 17th century and beginning of the 18th century. Based in Long Acre and St. Martin's Lane, London, his bills are the first to record floral marquetry and his stile was strongly influenced by the French taste of the period, two stylistic qualities seen on the bureau here.

Numerous influential noblemen were among his clients and receipts for his furniture are recorded for some of the grandest country houses, including Burghley House (Lincolnshire), Chatsworth (Derbyshire), Arundel Castle (Sussex), Knole (Kent), and Petworth House (Sussex).

Most notably, Jensen held the post of cabinet maker in ordinary to successive monarchs from James II to Queen Anne and had hundreds of items commissioned for the royal residences at Whitehall, St James, Somerset House, Kensington Palace, Windsor Castle and Hampton court.

Also from the same private collection in London, we will be offering Lot 82, a George II walnut wing armchair, circa 1730. It is upholstered in beautiful floral needlework, and bears the label 'Exhibited Bath Assembly Rooms International Art Treasures, 1973 No. 43'. It is estimated at £15,000-25,000 (+ fees). 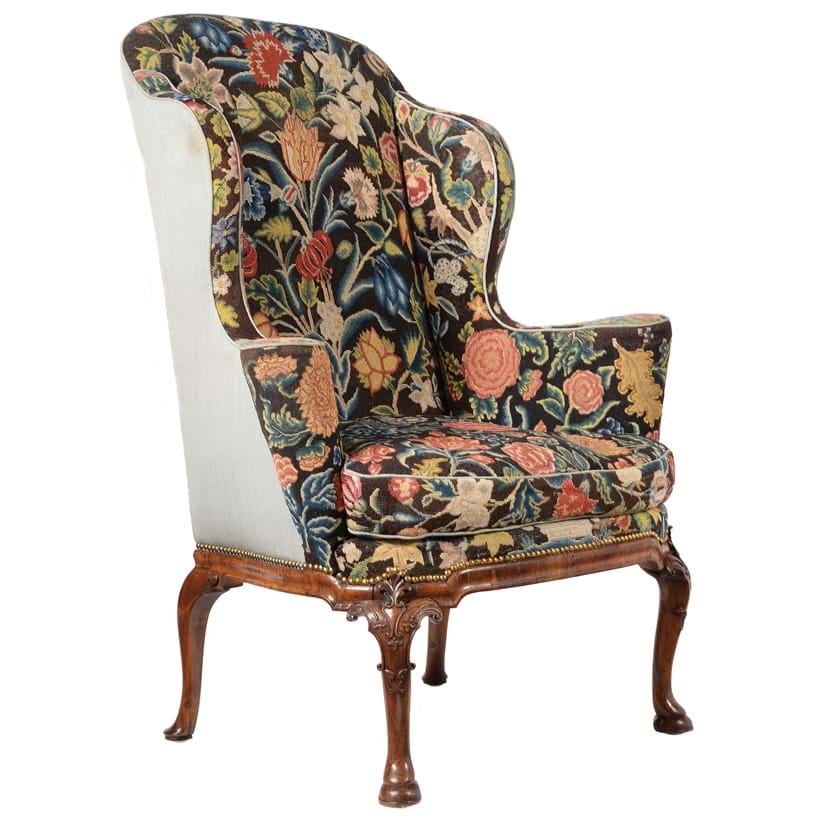 Another highlight is Lot 152, a George II mahogany estate cabinet, circa 1750. It is designed with the upper doors opening to various shelves and pigeonholes, and the lower doors opening to a shelved interior. This cabinet was sold previously by Christie's when they sold the selected contents of Hopetoun House, South Queensferry, Edinburgh Scotland on 20 July 1993. The original lot sticker from this sale is present with the lot. 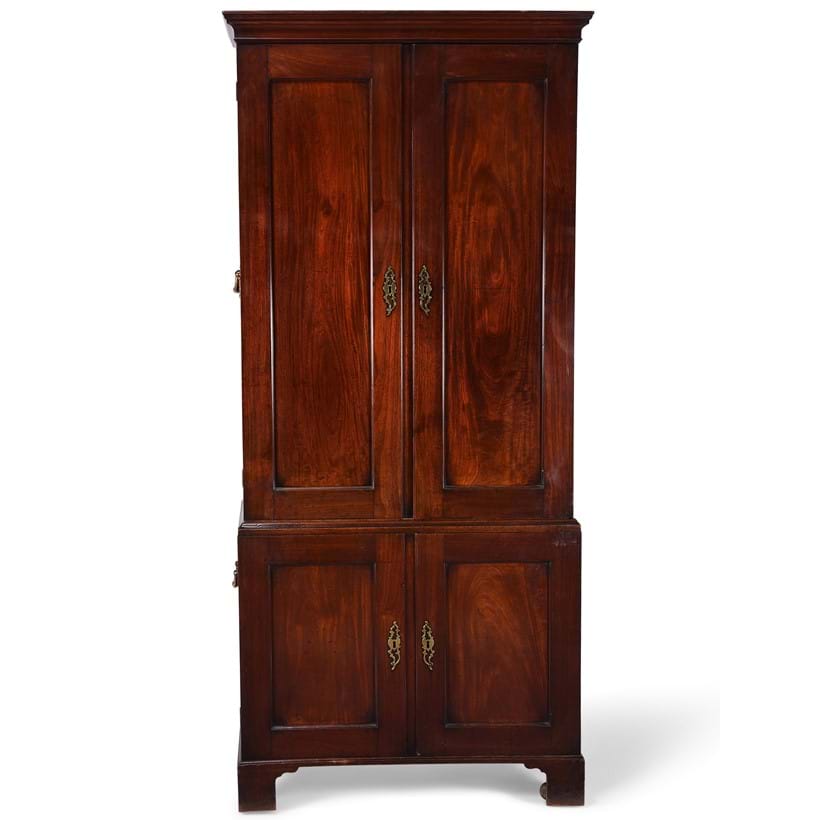 Hopetoun House, one of Scotland's finest stately homes, is an important part of European architectural heritage situated in South Queensferry, outside Edinburgh. Home of the Marquess of Linlithgow, Hopetoun is one of the most splendid examples of the work of Scottish architects Sir William Bruce and William Adam. The house was built 1699-1701 and designed by Sir William Bruce. The house was then hugely extended from 1721 by William Adam until his death in 1748, being one of his most notable projects. The interior was completed by his sons John Adam and Robert Adam. The magnificent entrance hall dates from 1752.

The Hope family acquired the land in the 17th century and operated lead mines. Charles Hope, the first occupant, was only 16 years old when his mother, Lady Margaret Hope, signed the contract for building with William Bruce, on 28 September 1698.

Continuing through the sale, we have Lot 192, a George II mahogany, brass and mother of pearl inlaid tripod table. It was previously part of the collection of Sir Michael Smurfit and is attributed to the German cabinet-maker, Frederick Hintz (d. 1772), who worked at the sign of 'The Porcupine' in Newport Street, Leicester Fields, London. 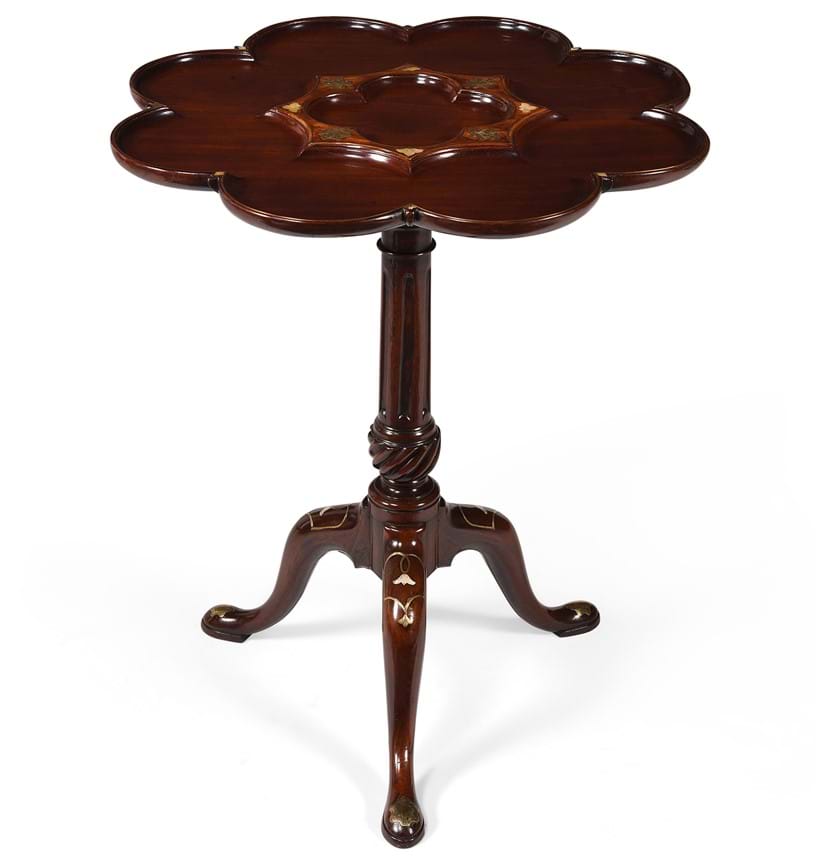 The table is one of a small though distinct group of similarly shaped and inlaid tables, which have between 8 and 12 'lobes' and which are particularly associated with a community of émigré craftsmen resident in London. A number of these tables featured in the 1993 exhibition, John Channon and brass-inlaid furniture 1730-1760 at the Victoria & Albert Museum, alongside other related pieces. While sharing certain common features, this table is notable for the use of exotic mother of pearl, a relatively uncommon material at the time. The definitive work on this form is 'John Channon and Brass inlaid Furniture' by Christopher Gilbert and Tessa Murdoch, in which related examples are illustrated and it is noted that only thirty four such brass inlaid tables have been recorded.

Hintz was born in 1711 in Settin, a town in former East Germany. By 1737 he was living in London and as a member of the Moravian Church, a protestant religious movement that grew in Germany and England during the mid-18th century comprising communities of craftsmen, he worked under the auspices of the church. He is known as a maker of stringed musical instruments and, records show that in 1748 he made a harpsichord for the Moravian Chapel in Fetter Lane. He was also, as recorded in a 1738 advertisement discovered by the furniture historian, R.W.Symonds, a maker of 'Desks and Book-Cases of mahogany, Tea-Tables, Tea-Chests, and Tea-Boards etc. all curiously made and inlaid with fine figures of brass and mother of pearl'. At the same time other German cabinet-makers working in London included Abraham Roentgen, with whom Hintz appears to have had a close professional relationship (they travelled to Germany together in June 1738), and the lesser-known maker, Gern.

A Regency Extending Dining Table by Morgan and Sanders

With Christmas just around the corner, now is the time to make sure you have the right dining table to accommodate all your friends and family this party season. We have a range of dining tables coming up in this auction, with a highlight being Lot 286, a Regency mahogany extending dining table by Morgan and Sanders. With three additional leaf insertions and measuring 305am when fully extended, this table will ensure you have enough room for all your guests. The end handle is inscribed 'Patent, Morgan & Sanders, Inventors & Manufacturers, 16 & 17 Catherine Street, Strand, London'. 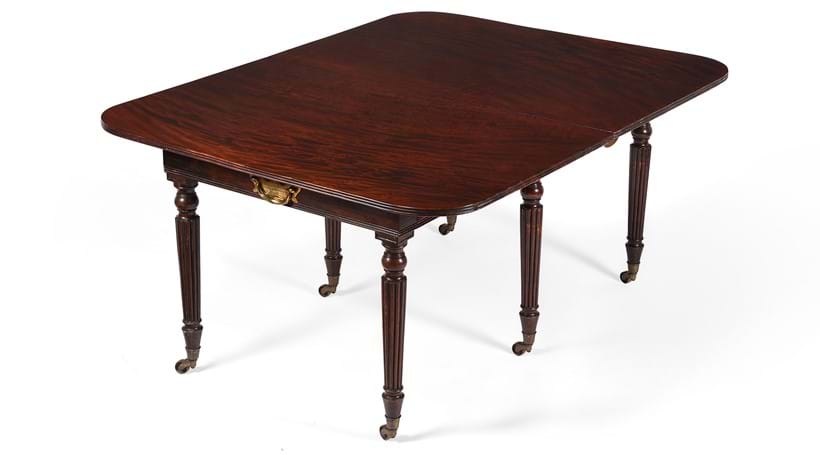 Much is known about the business of Morgan & Sanders because of their involvement with Rudolph Ackermann, print seller, art dealer and publisher of the Strand. For his monthly periodical 'The Repository of Arts' they supplied a succession of furniture designs which were published between 1809 and 1815. They had by this date named their premises 'Trafalgar House' to capitalize on the death of the naval hero Lord Nelson for whom they were providing furniture for his house at Merton, Surrey in 1805. The partner's claim to have supplied furniture to Nelson is supported by a payment of £549 in 1810 to Morgan & Co, from money provided by the Marquess of Queensbury to clear part of the debts of Lady Hamilton who had inherited Nelson's house at Merton. In the Repository of February 1810 the partners claimed to have supplied their Pitt's Globe Writing Table to the Royal family and the illustration used by Ackermann was said to be based on one ordered by the Princess Augusta. Thomas Morgan also claimed that whilst in Butler's employ he had visited Buckingham House and showed a model of his Imperial Dining Table to the King, Queen and other members of the Royal Family.

We ask that visitors wear a face covering when visiting our salerooms. We may need to restrict the number of visitors viewing at one time, so if you would prefer to book an appointment in advance, please contact us: +44 (0) 1635 553 553 | furniture@dreweatts.com