The first Fine Furniture, Ceramics, Carpets and Works of Art auction of 2019 at Donnington Priory features over 300 lots, and includes furniture, from the 16th century through to the Victorian era, and continental pieces from Spain, Italy and France; carpets and rugs from Persia and Turkey; textiles, tapestries and needlework; lighting in the form of chandeliers, lanterns and candlesticks; ceramics and porcelain from Wedgwood and Meissen are also offered, as well as a group of Staffordshire salt-glazed stoneware.

This Flemish woven wool figural tapestry dates from the late 17th or early 18th century, and depicts a classical scene, probably the sacrifice of Iphigenia at Aulis: a maiden is seated on an altar surrounded by draped figures to either side before a background featuring classical architecture and a ship.

The story of Iphigenia at Aulis was chronicled by the Greek tragedian Euripides (c. 480-106 BC) – the angered Goddess, Artemis, takes away the wind, so leaving Greek troops stranded at the port of Aulis. In order to appease the deity, King Agamemnon is forced to sacrifice his daughter, Iphigenia. The draped lady to the left of the altar, in the tapestry, could well be Iphigenia’s grieving mother, Clytemnestra. 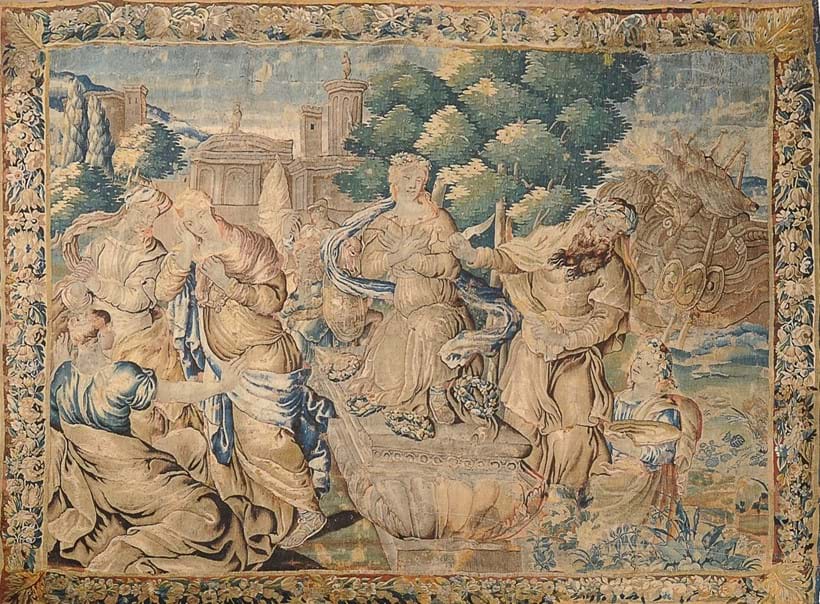 A painted six fold room screen, in 18th century style and dating from the 19th century. One side is painted with central reserves in polychrome depicting classical scenes of maidens and winged cherubs amongst clouds. These are flanked above and below with reserves painted in monochrome with putti playing and seperate reserves depicting urns of various forms. The reverse of the screen is painted in gold and polychrome with Chinese figures in traditional dress and dragons.

Folding screens originated in ancient China, and in written references can be dated to the 4th century BC, during the Han Dynasty, however, it is likely they date from earlier. They were initially made to act as room separators, and not to be moved around frequently. The first Chinese screens were made of wooden panels, and decorated with fine art. Scenes from life in the palace, mythological themes and motifs from nature were invariably painted on the screen panels.

With its potential for decoration and its flexibility, over the centuries the folding screen has always been more than just a useful piece of furniture. 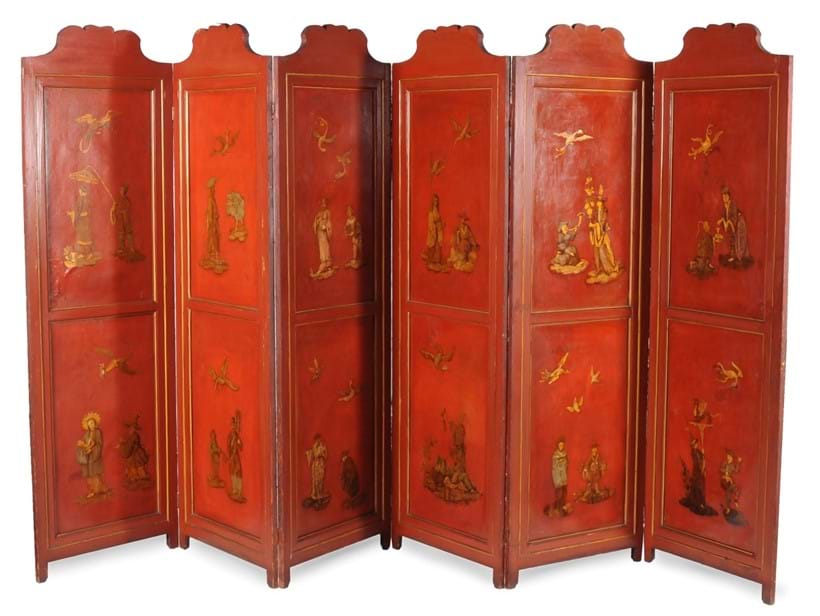 An Irish George II 'red' walnut armchair, circa 1750, the frame with floral, cartouche and scroll carving throughout, the padded and tapestry upholstered back and seat decorated with a parrot in a verdure landscape; flanked by padded arms on scroll supports, above the shaped apron centred by a satyr mask, on cabriole legs terminating in claw on ball feet.

‘Red’ walnut is a timber recognised almost exclusively when used for items of furniture from the George II and early George III period. It has the grain of walnut, but with its ‘red’ tinge it is close to mahogany. 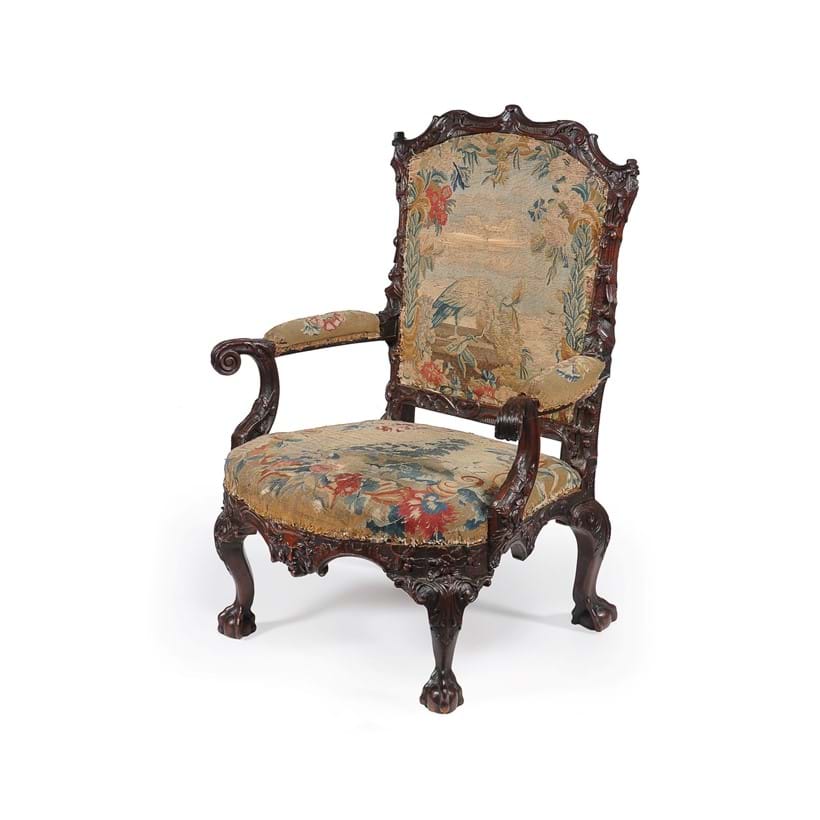 A Turner black basalt vase in the form of an amphora with a pair of shoulder handles, circa 1805, sprigged in red stoneware with classical figures, impressed with TURNER.

Provenance: The Oxborrow Collection and previously Grigsby and Rakow collections.

The Turner family of potters was active in Staffordshire from 1759-1829. Their first factory was in operation from the 1760s until about 1804, there was a revival in the 1820s and various family members worked for other factories.  The firm is known for its basalt ware, along with caneware and jasperware.

In geology basalt is a rock formed from the rapid cooling of lava which takes place close to the surface of a planet. As seen in pottery this hard black stoneware also called basalt was created and perfected by Josiah Wedgwood at his Etruria pottery in Staffordshire at the end of the 18th century. Tea services in basalt in particular were very popular as boiling water could be poured directly into tea pots without the risk of cracking. Low relief designs, as in this piece here, were used extensively, with antique pieces amassed by collectors providing the inspiration for decorative, classical themes. 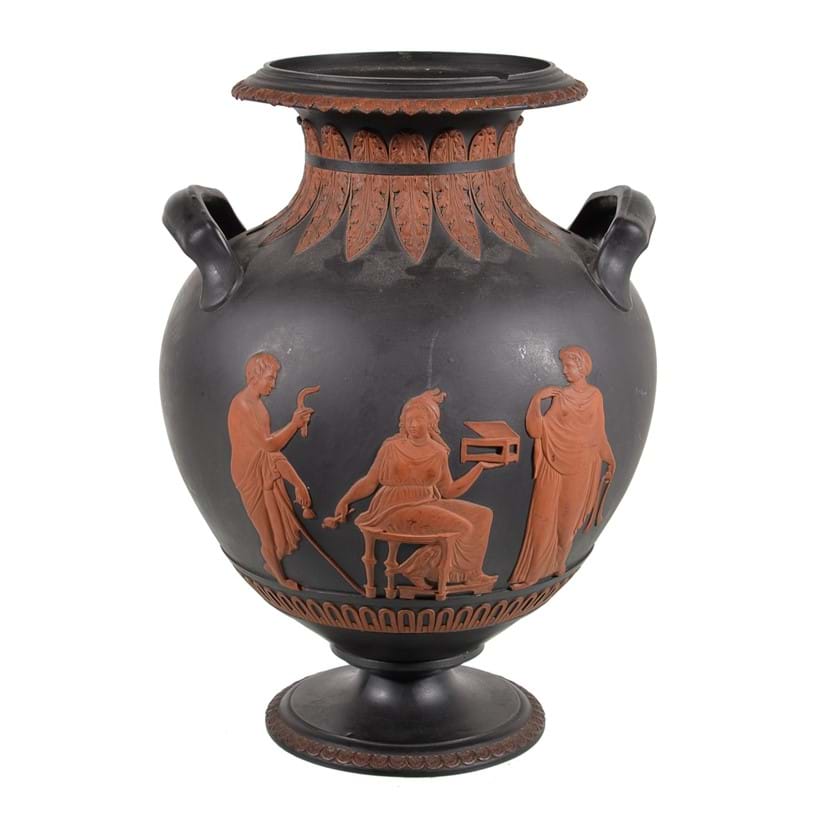 George III wall mirror in the manner of Thomas Chippendale

This George III carved giltwood and gesso wall mirror is in the manner of Thomas Chippendale, circa 1770. The rectangular plate is flanked by border plates with fluted twin pilasters, and surmounted by an urn and cover with drapes on foliate scroll supports, above open interlaced foliate borders and conforming apron with central anthemion.

It measures 175cm high, 92cm wide, and is offered together with a matching mirror, with a later date. 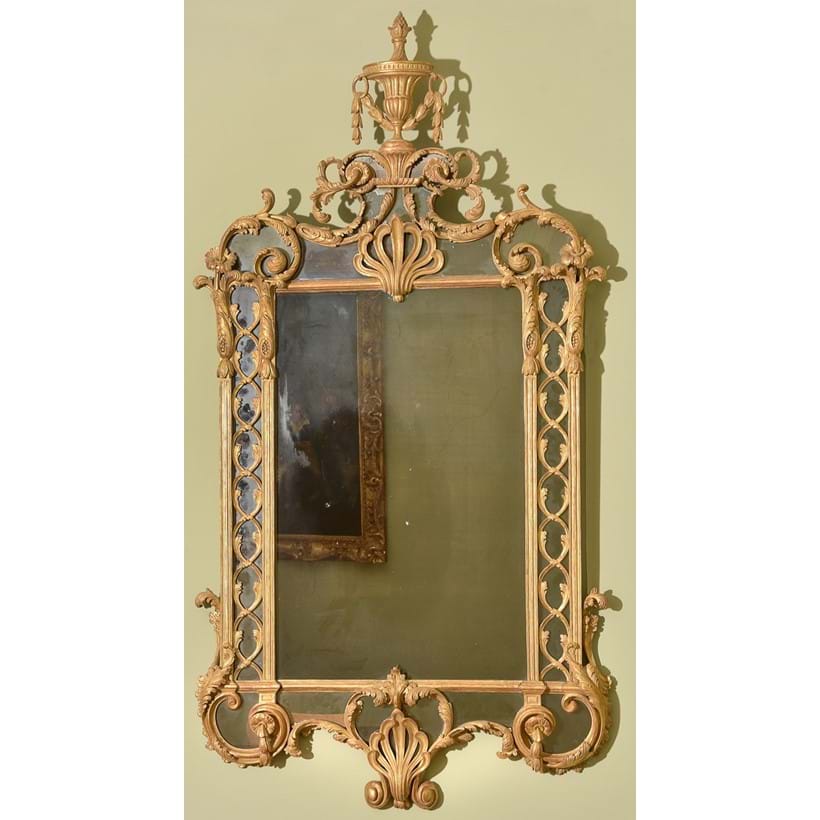 With their characteristic Greek key motifs, tapered shafts and socle design with two ornate rims, the pair bear distinct similarities to a type popularised in late 18th century Britain by the prolific workshop of Birmingham metalware manufacturer and industrialist Matthew Boulton. However, the Boulton type was usually adorned with lions’ masks, as opposed to the unusual togate satyrs seen in this lot. 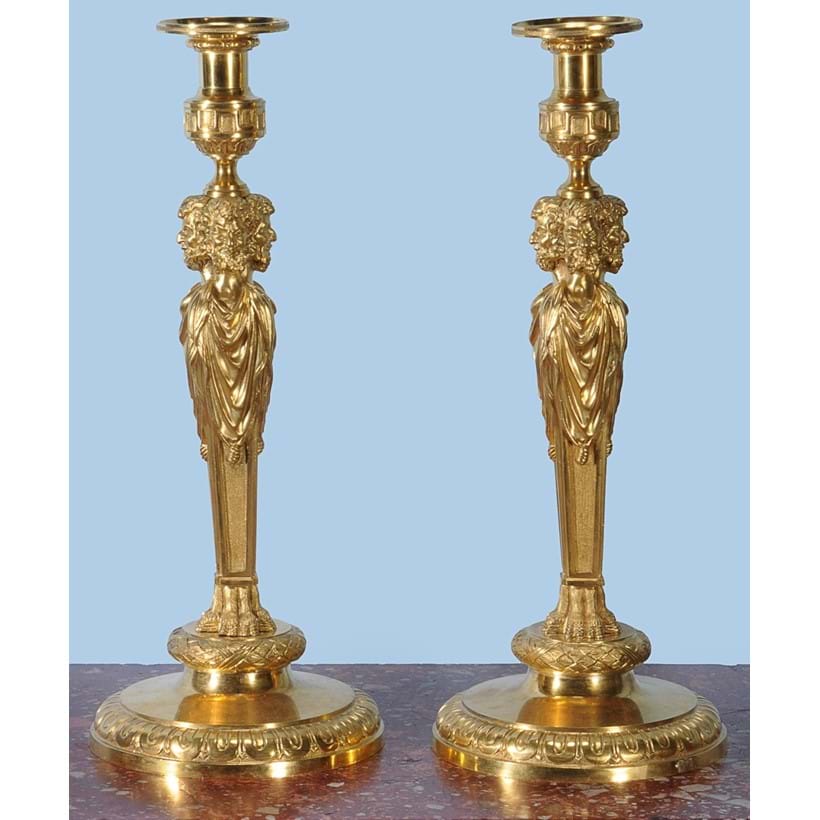 Robert Gillow (1704-1772) founded his luxury furniture and furnishings firm in 1730 in Lancaster, after working in the West Indies as a ship’s carpenter. Whilst in Jamaica he became interested in mahogany and it is thought he was responsible for bringing the first samples of the wood to England. In the 1730s the firm established a reputation for the manufacture of high quality furniture and furnishings.

The Gillows’ business prospered for over a century and in 1903 merged with Waring of Liverpool, to create Waring and Gillow. 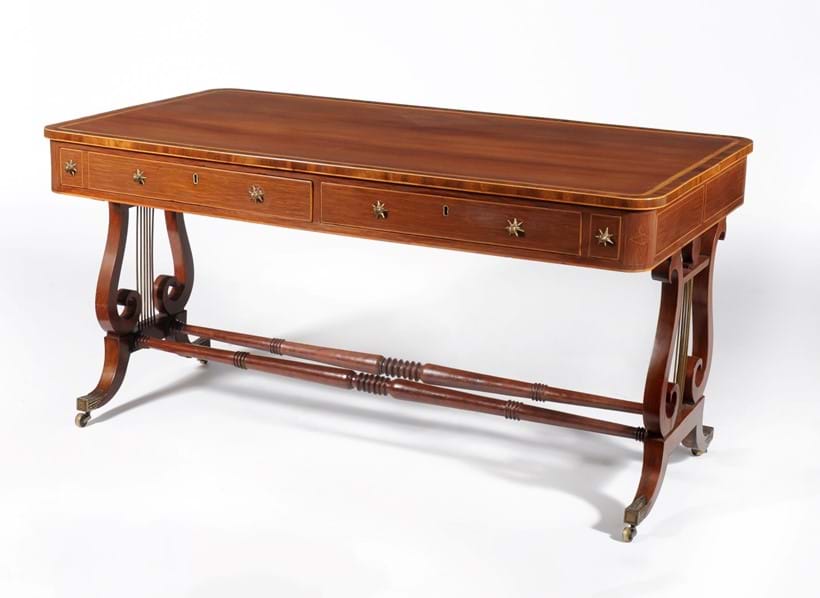 A substantial Victorian gilt bronze and glazed hall lantern, from the second half 19th century. It is cylindrical in form, with four scrolled and foliate cast supports descending from a previous gas fitting, to arboreal mounts at the upper circlet. It is hung with tassels and ribbon swags, and contains a four light fitment within.

For further information on the lots in the auction and to discuss consigning in future auctions, contact us: furniture@dreweatts.com | +44 (0)1635 553 553. 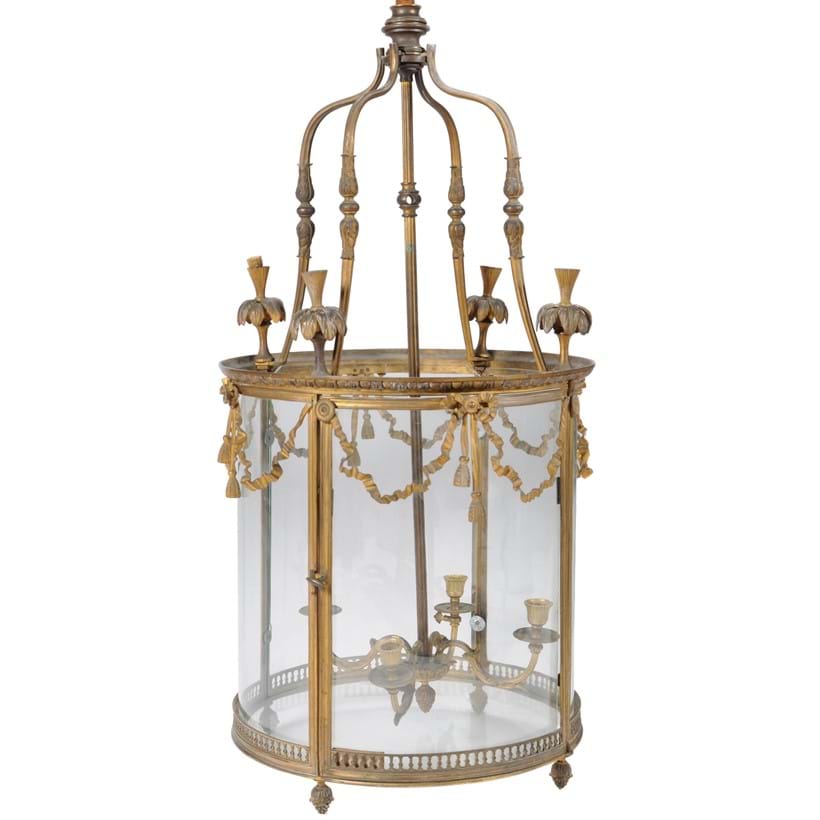