Coming up this autumn, we have our Fine Clocks, Barometers and Scientific Instruments auction on Wednesday 6 October. Comprising over 225 lots, the auction features an extensive selection of lovely fine and rare pieces. Ahead of the auction we pick out some of the highlights.

We kick start the auction with a fine pair of George III/Regency 12 inch library table globes by Thomas Bardin and William & Samuel Jones, London, dating to 1817 and 1800 (Lot 1). 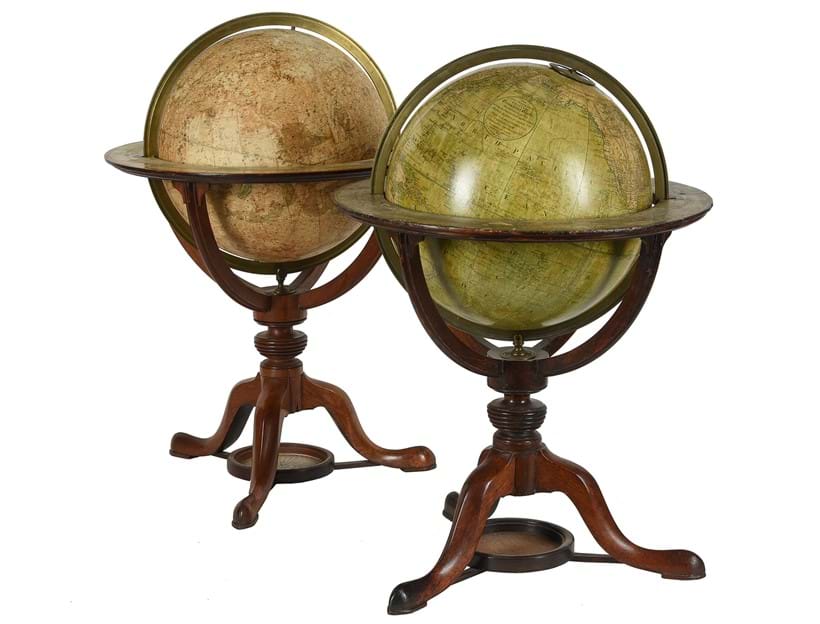 Thomas Marriott Bardin is recorded in Clifton, Gloria Directory of Scientific Instrument Makers 1550-1851 as a globe maker apprenticed to his father, William, in 1783 with whom he went into partnership in 1790. Bardin and Son initially worked from 4 Hind Court, Fleet Street, London before moving to 16 Salisbury Square in 1975. William Bardin died in 1795 leaving the business in the hands of Thomas who remained working from the same address until 1839. William and Samuel Jones are recorded by Clifton as optical, mathematical and philosophical instrument makers who worked from several addresses in Holborn 1791-1859 including 135 Holborn (1792-1800) and 30 Holborn (1800-1860).

It is interesting to note that the celestial of this pair does not bear the name of Bardin, however it was common practice for the vendors of globes to put their own trade label over that of the manufacturer. Indeed, this was a matter of course with Bardin-supplied globes retailed by the Jones's such was the nature of their trading relationship (bearing in mind that very often it was William Jones who had designed the globe in the first place).

From the selection of barometers a highlight is Lot 35, a fine George III mahogany bayonet-tube mercury stick barometer with a large scale thermometer. Dating to circa 1780, it was made by Nairne and Blunt of London.

The collaboration between Edward Nairne and his former apprentice Thomas Blunt is recorded in Banfield, Edwin BAROMETER MAKERS AND RETAILERS 1660-1900 as established in 1774 and lasting until 1793. Edward Nairne was born in 1726 and apprenticed to the celebrated instrument maker, Matthew Loft, in 1741. Latterly he worked from 20 Cornhill and published numerous booklets on navigational, pneumatic and astronomical instruments. In 1776 Nairne devised a marine barometer with a restriction to the bore of the mercury tube which served to dampen the oscillation of the mercury, he was elected Fellow of the Royal Society in 1776 and died 1806. Thomas Blunt was apprenticed to Edward Nairne in 1760 with whom he formed a loose partnership in 1774, perhaps for mutual convenience as his premises were next door to Nairne's at 22 Cornhill. Blunt designed some of the components for the 'New Barometer' devised by the Portuguese Scientist J.H. Magellan for measuring altitude, and latterly became instrument maker to George III. In 1793 he took his son, also named Thomas, into partnership and subsequently relocated to 136 Minories in 1814, he died in 1822.

Continuing through the sale, we have Lot 161, a rare French gilt brass, bronze and Rosso Francia marble novelty automaton timepiece, titled 'The Oarsman'. This was made by Andre Romain Guilmet in Paris, and retailed in London by Dibdin and Company during the late 19th century. This comes to auction from the private collection of Manchester racehorse betting tycoon Selwyn Demmy (1932-2020). 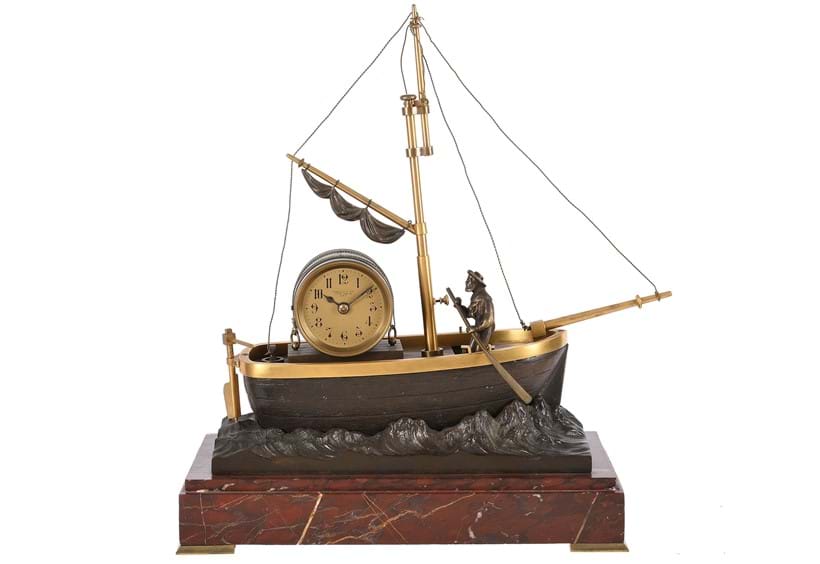 Andre Romain Guilmet was born on the 10th of December 1827 in La Ferte-Gaucher, France. He was credited as a watchmaker and inventor who specialised in producing novelty and mystery clocks for which he applied for a number of patents for designs. Amongst his other Patents was that for a bicycle where the driving chain was set below the seat. He is best known for his 'mysterieuse' figural clock with glass pendulum, this takes the form of a woman holding pendulum in her outstretched hand and arm over a marble base containing the clock below. The pendulum is impulsed by the mechanism underneath her that moves the figure imperceptibly from side to side (see following lot). Guilmet's industrial series of clocks, which includes the current lot, features automated clocks in the form of windmills, lighthouses, automobiles, boats, steam hammers, boilers, etc. 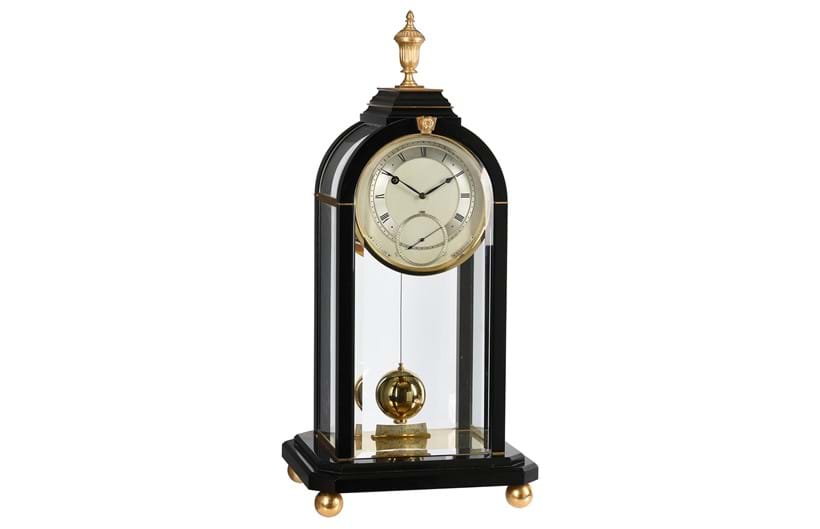 There are two principal designs of gravity escapement the first is the double three-legged type the second in the four legged design. The former uses two pairs of three legs for the pallets and three impulse pins at the centre whilst the second has four legs and four pins. The disadvantage of the both of these designs is that the escape arbor revolves either 1/6 (double three legged) or 1/4 (four legged) for each beat of the pendulum hence the train of the timepiece needs suitable long gearing to maintain a reasonably long duration. The current movement is unusual in that it utilizes a six legged arrangement which has no doubt been employed to facilitate running with a half-seconds pendulum.

The Cheltenham based clockmaking firm Sinclair Harding was established by Bill Sinclair and Mike Harding in 1967. Between 1971 and around 1995 the business evolved from being initially focussed on restoration and repair to designing and building their own clocks including chiming longcase and table clocks, their design of 'sea clock', giant and perpetual calendar carriage clocks. In 1995 Mike Harding retired leaving the firm in the hands of Robert Bray; the following year Sinclair Harding were commissioned to make the clock for the Oval cricket ground and the business was relocated to North Yorkshire. In 1999 their first scale version of John Harrison's sea clock was produced adding to their ever increasing catalogue of complex timepieces, and 2010 saw Robert Bray awarded the Barrett Silver Medal by the British Horological Institute as well as being appointed Vice President. The firm have always been regular attendees at Baselworld and in 2017 exhibited their Harrison H1 timepiece at Salon QP.

Finally, we wanted to take a look at Lot 210, a William III walnut eight-day longcase clock. This was made by William Wright of London, circa 1695. William Wright senior is recorded in Loomes, Brian The Early CLOCKMAKERS of Great Britain as born circa 1670 and apprenticed to Henry Brigden in 1684 but not Freed. He worked just outside of the City of London in Crown Street, Southwark (probably to place himself just beyond the jurisdiction of the Clockmaker's Company), and was involved with Richard Street with taking over of the maintenance of the clock at St. Pauls from Langley Bradley in 1716. He died by 1719 but was succeeded by his son of the same name who is thought to have died in 1758. 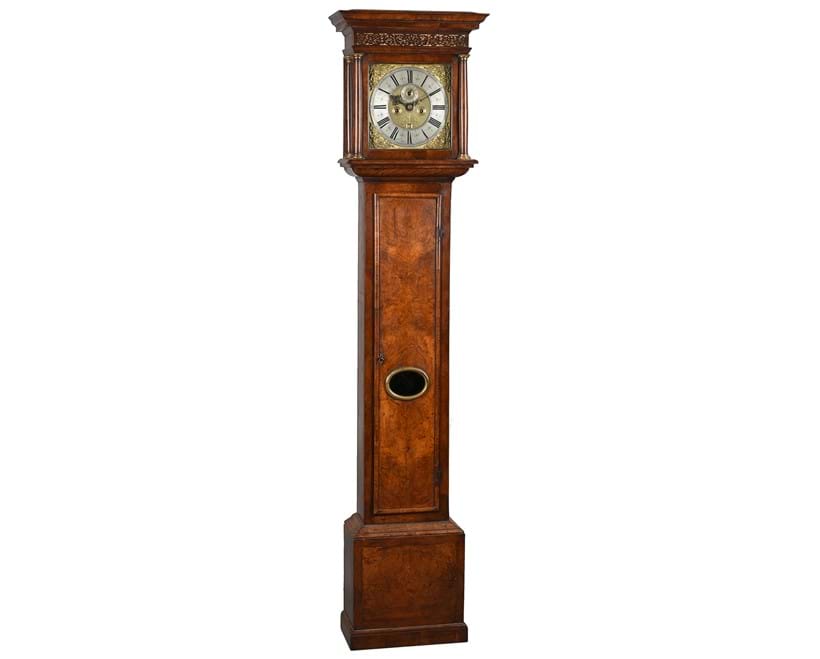