The forthcoming auction of Fine Art on 5 December features 245 lots by artists ranging from Giorgio Vasari through to contemporary works by Banksy, Peter Blake, Andy Goldsworthy and Jonas Wood.

Giovanni Domenico Tiepolo was the eldest surviving son of the great Italian Rococo painter Giovanni Battista Tiepolo, he became his father’s chief assistant at the age of thirteen and working with him in Venice, Würzburg and Vicenza. Although inevitably overshadowed by his father’s reputation he was in his own right an accomplished painter with his output generally more down to earth and less allegorical than that of his father. After Battista Tiepolo’s death in 1770 Domenico’s style developed and he worked extensively in Venice where he painted a number of portraits and street scenes, the latter full of movement and deliberate, careful composition. His work in the December auction depicting mythological figures shares these attributes: the swirling, soaring group is captured in flight from below so affirming their height above the viewer. Suspended aloft on wings they effortlessly fill the centre and diagonals of the sheet with clouds in the background reinforcing the space they occupy. Many of Tiepolo’s works were drawings with ink wash, as this example here, and they can be found throughout the world in major and regional museums and galleries. 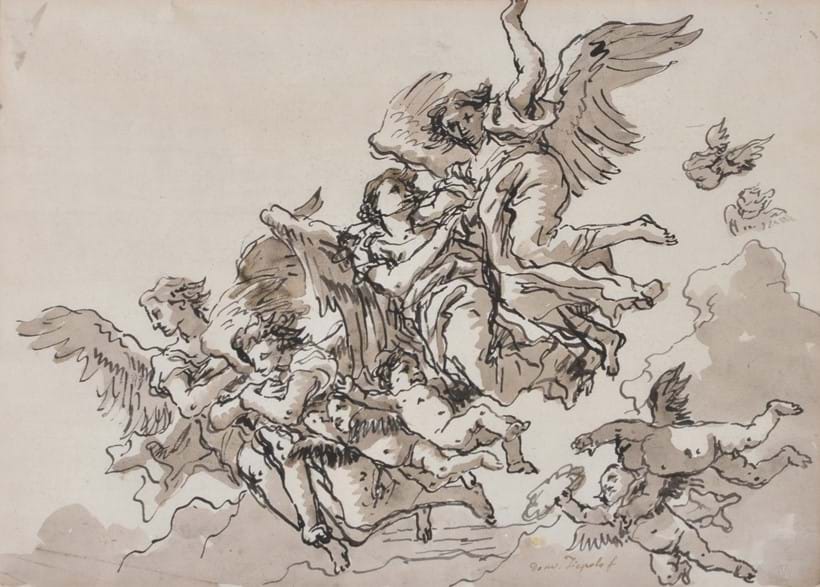 This impressive portrait once hung in historic Littlecote House, set amidst gardens and water-meadows on the banks of the River Kennet between Hungerford and Ramsbury on the Wiltshire / Berkshire border. Littlecote has been developed and extended over the years with Tudor, Elizabethan and Georgian quarters extending from its medieval core. The house has played host to many famous visitors, including Charles II, James I, James II, William III and Henry VIII who is reputed to have courted Jane Seymour there.

William Leybourne, the subject of this work, was born in 1773 and soon after joining the Royal Navy he died in service in 1790 at the age of 19. The portrait captures the young man in his naval uniform with a fleet of ships in the distance. It is likely that the painting was the last visual record of William Leyborne before his early death. A memorial tablet was placed in the church at Chilton Foliat, in loving memory of William: Lamented youth! Tho thy too early doom has nipt these opning virtues in the bloom, still may we hope hereafter theyll be blest with joys immortal, with eternal rest.

The portrait is mentioned in Vernon Watneys guide to Littlecote House, published in 1900, where it was noted that the portrait was hanging in the drawing room alongside that of Marianne, his sister. In November 1985 the work was sold at auction, in The Contents of Littlecote House. 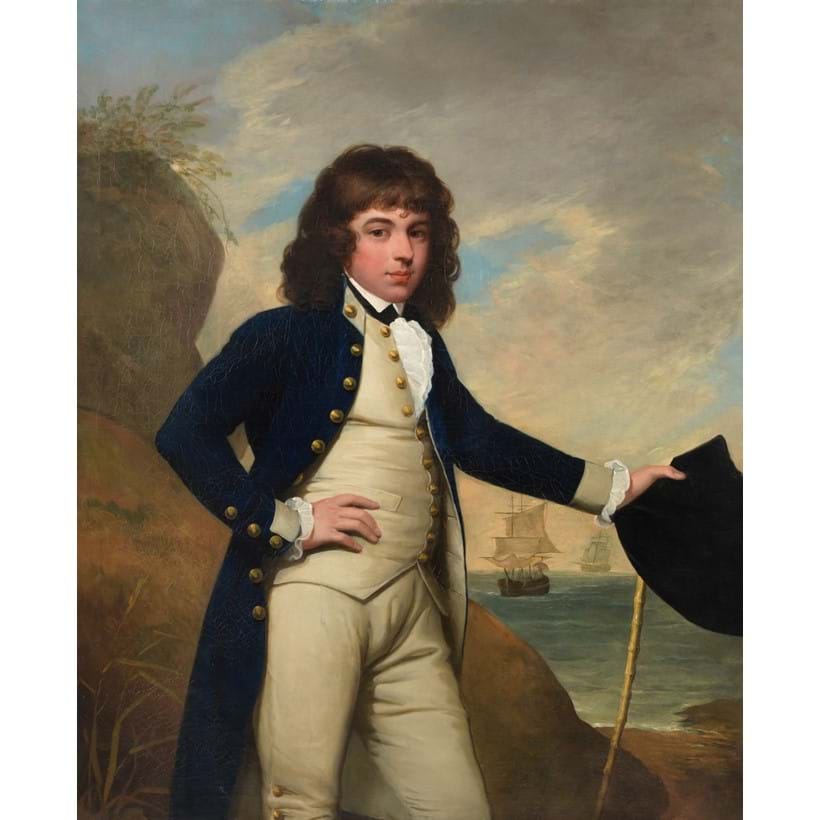 This imposing family portrait by Sir William Beechey depicts the four children of Sir Walter Stirling and Susannah, (neé Goodenough). Sir Walter served in the Royal Navy and was appointed Commander in Chief of the Fleet at Nore by George III.

William Beechey enjoyed a career spanning fifty years and was a highly prolific portrait painter receiving commissions from the Royal Family and many leading figures of the day, including Viscount Nelson, the Duke of Wellington and the actress Sarah Siddons. In 1798 Beechey was appointed a full member of the Royal Academy and in the same year was appointed to paint George III and the Prince of Wales Reviewing Troops, the work greatly pleased the King and Beechey was awarded a knighthood. 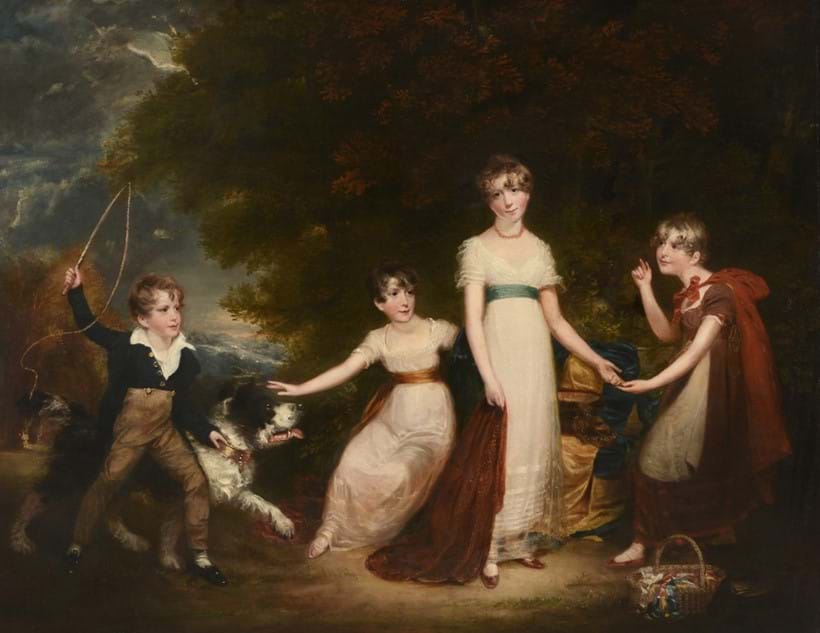 This colossal work portrays classical Rome, with the dense crowds and magnificent buildings both serving to convey the power of the Empire. Spectators occupy every available space in order to observe the spectacle of a vibrantly coloured procession of soldiers accompanied by dancers progressing through the city. The arrangement of buildings is somewhat of a capriccio, or an architectural fantasy, and has been created specifically for the composition; as laid out here these thoroughfares and squares are not to be found in Rome.

In the course of his working life the artist Sir Charles Eastlake (1793-1865) was based for some years in mainland Europe, and in 1816 he visited Rome where he painted British visitors travelling through the country. From 1830 Eastlake resided permanently in England from where he continued to paint historical and biblical paintings set in Mediterranean landscapes. 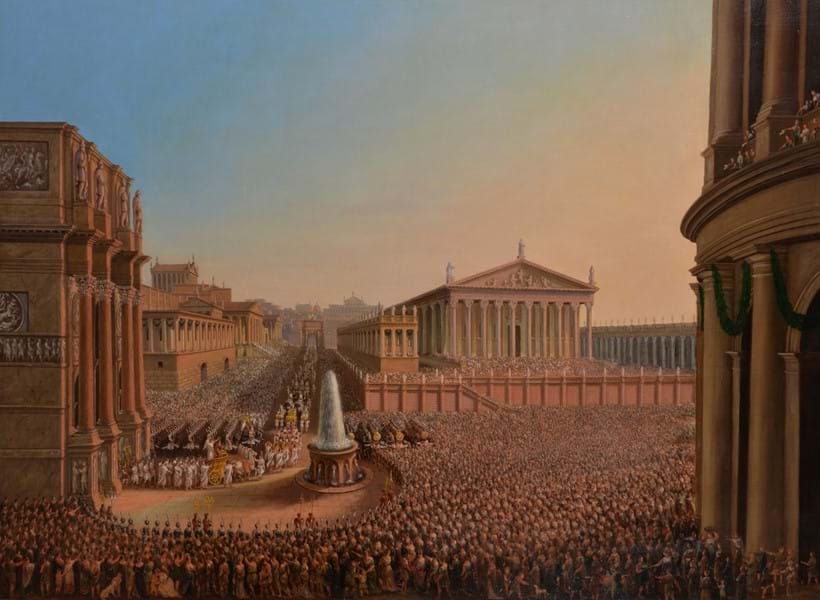 The auction includes four works by Maxwell Ashby Armfield (British 1882-1972). Armfield was a pupil at Birmingham School of Art from 1899-1902 at a time when the School was considered to be the major centre of the Arts and Crafts Movement. In addition, Armfield studied tempera painting with the artist Joseph Southall, and later in 1946 would publish Tempera Painting Today. The artist had periods living abroad, initially in France, where in 1904 his painting Faustine was acquired for the French State, and America from 1915-1922.

Armfield’s works in the auction take their inspiration from nature, namely flowers, fruit and vegetables. Lot 187, is in egg tempera, (whereas the other three are oils) and the two paintings included display the classic characteristics of the medium: the colours still remaining true and bright with the overall appearance resembling that of a pastel. Tempera would seem to work here extremely well given the challenge in capturing detail and texture coupled with a soft and delicate Autumn light. 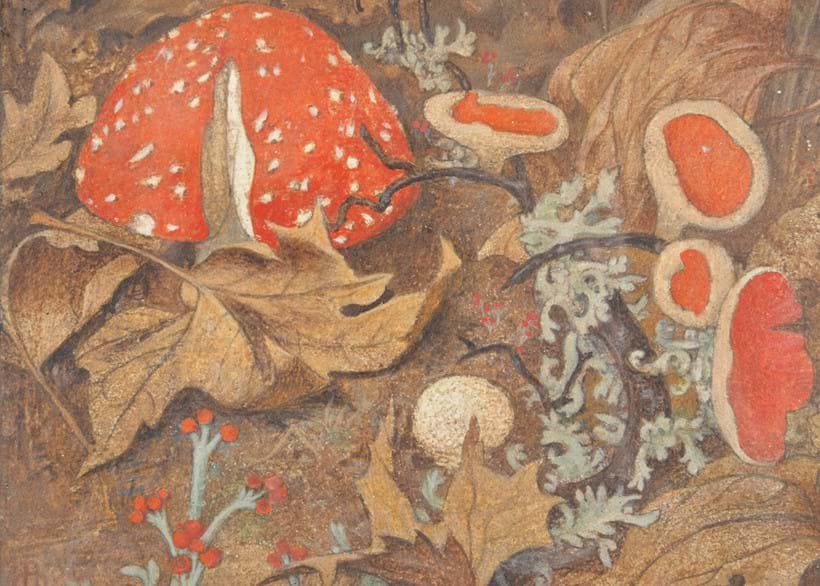 A love for still life

This striking oil on canvas, Still life with lemons and wool, by Oscar Ghiglia (Italian 1876-1945) dates from 1909, eight years after Ghiglia’s breakthrough self portrait was exhibited at the Esposizione Universale in Venice. Soon after his reputation for portraiture began, however, still life turned out to be his true love although his first work in this genre was painted as late as 1907. The forms in Ghiglia’s still lifes are solid, with very little textural or flickering brushwork and clean, strong colours. He was active at the same time as various influential post-Impressionist artists, such as Cézanne, Gaugin and Seurat yet he maintained his own distinctive style, which, if it should be located, looks further north than France – the Danish artist Vilhelm Hammershøi produced subdued interiors with a less bright palette, but, takes a similar approach to form and the use of solid colour. 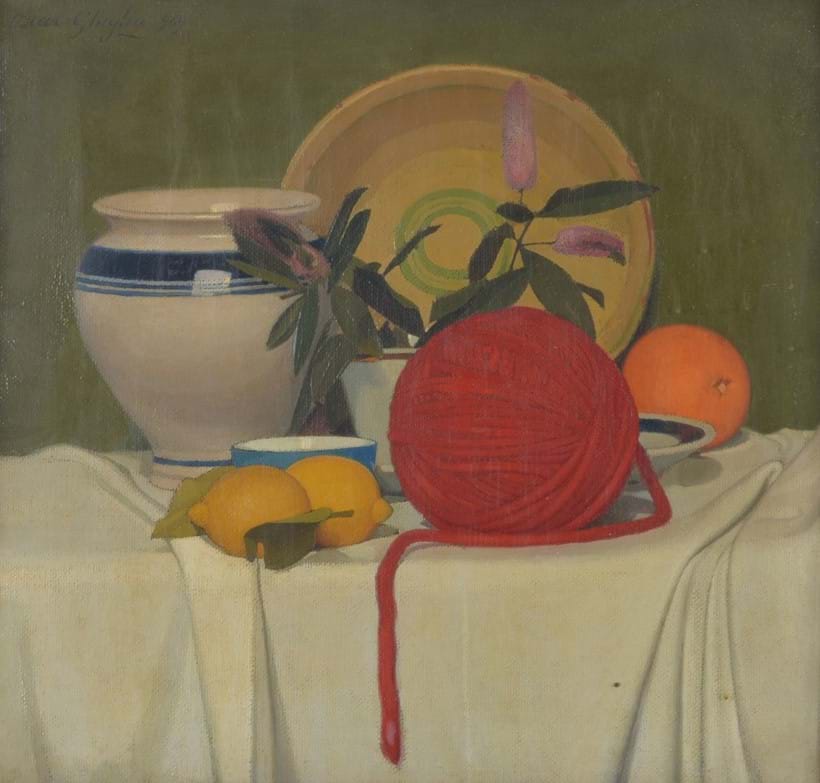 The Fine Art auction comes right up to date with five works by the popular artist Jack Vettriano (Scottish b. 1951). At the age of 38 years the self-taught Vettriano exhibited two works at the Royal Scottish Academy and his art came to the public’s attention. In 1991 he participated in the Royal Academy’s Summer Exhibition, selling out on the first day of the show and from this time on he became a full time artist.

Vettriano draws the viewer in through his use of an underlying narrative, sometimes explicitly indicated by the title of the work, for example in this group, The Awful Truth and Out for the evening; by contrast, the story behind The Cricketers, is more open to interpretation and imagination. In an interview in 2010 Vettriano admitted, ‘I live in a world of heartbreak…I just seem to be more creative when I am in some kind of emotional distress’, and his works are consistently characterised by strong visceral emotions: love, jealousy, betrayal, attraction, elation and, occasionally, sheer joy. Rather like a compelling romantic novel his audience is offered the glimpse of a world driven by human passions. 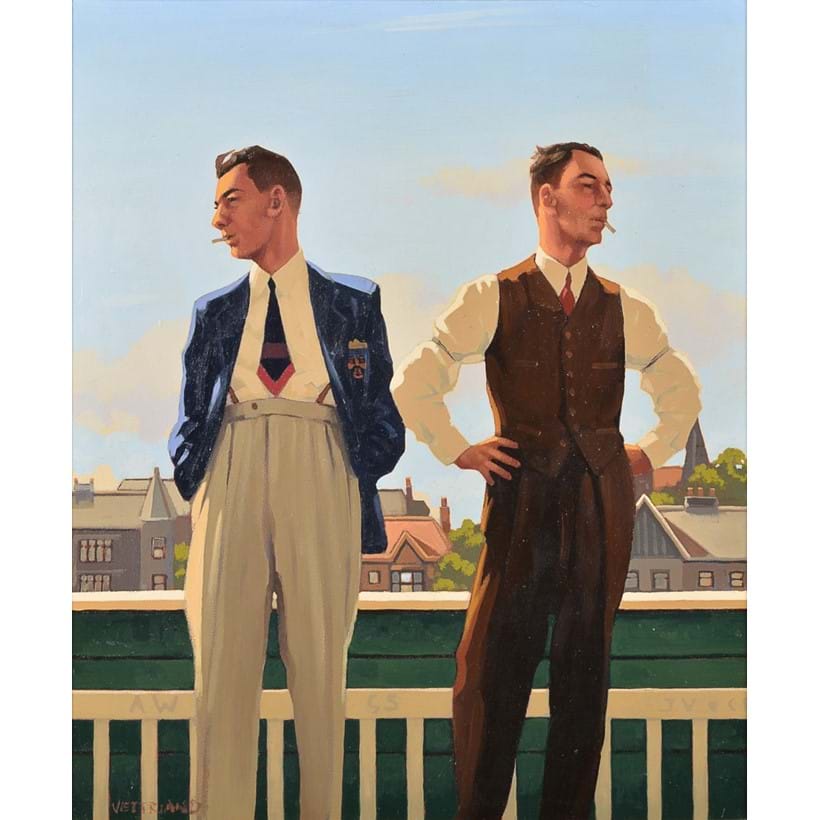