Coming up on 21 April we have our Fine Clocks, Barometers and Scientific Instruments auction. The auction features an exquisite range of items of both scholarly and academic interest as well as ornamental examples in a wide range of styles. Highlights from the sale include some impressive wall and longcase clocks.

A highlight is Lot 176, a fine and rare Charles II walnut thirty-hour striking small hooded wall clock with alarm by John Knibb, Oxford, circa 1685. This comes to the auction from the property of a gentleman collector. It was originally purchased from our salerooms on Wednesday 17 February 2010, when it achieved a hammer price of £37,000. Then it was noted that the clock was a recent discovery and believed to have formed part of a connoisseur collection of antiques and works of art compiled during the early 20th century. 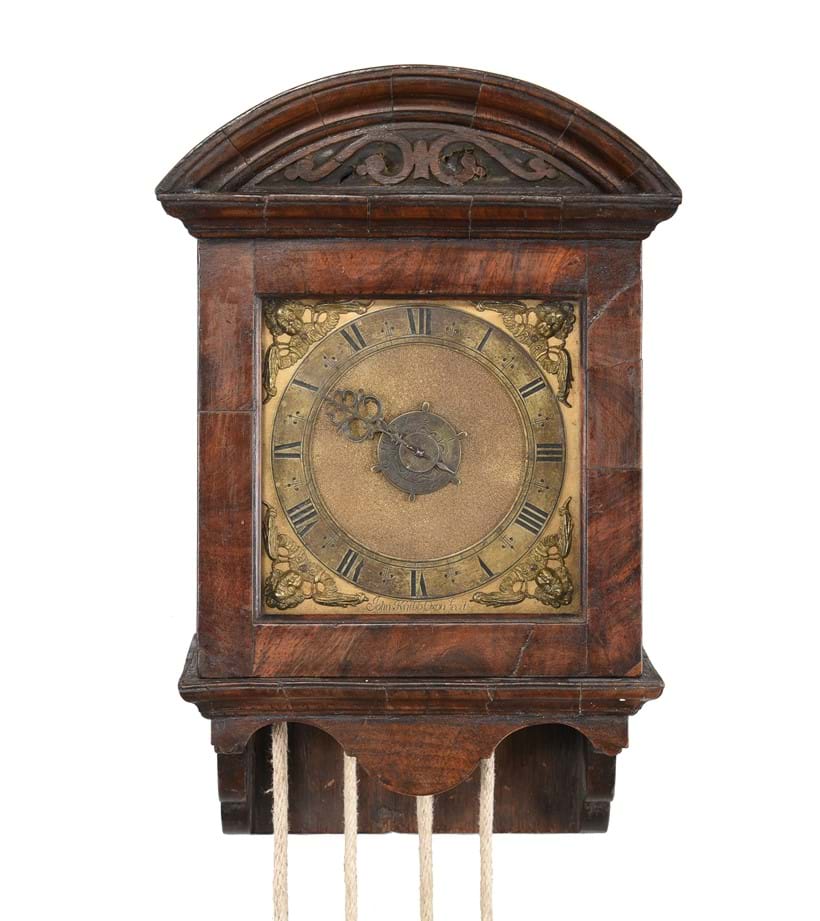 A clock signed by John Knibb is a rarity. The current clock as well as featuring his signature, also belongs to a rare group of probably less than ten surviving examples of small hooded wall clocks from the workshops of both John and Joseph Knibb. Although these clocks were generally made for a common purpose, it seems that they do vary in detail and specification to the extent that no two are exactly the same. The current lot is perhaps one of the more unusual ones, as it is constructed with a plated movement, compared to the majority of the other surviving examples which appear the have posted movements based on miniature lantern clocks with standard 'Knibb' castings.

Highlighted here is Lot 180, a fine Charles II ebonised thirty-hour longcase clock. It is unsigned, but is possibly by John Wise of London, circa 1678. It has a rather unusual figural engraved 10-inch dial. 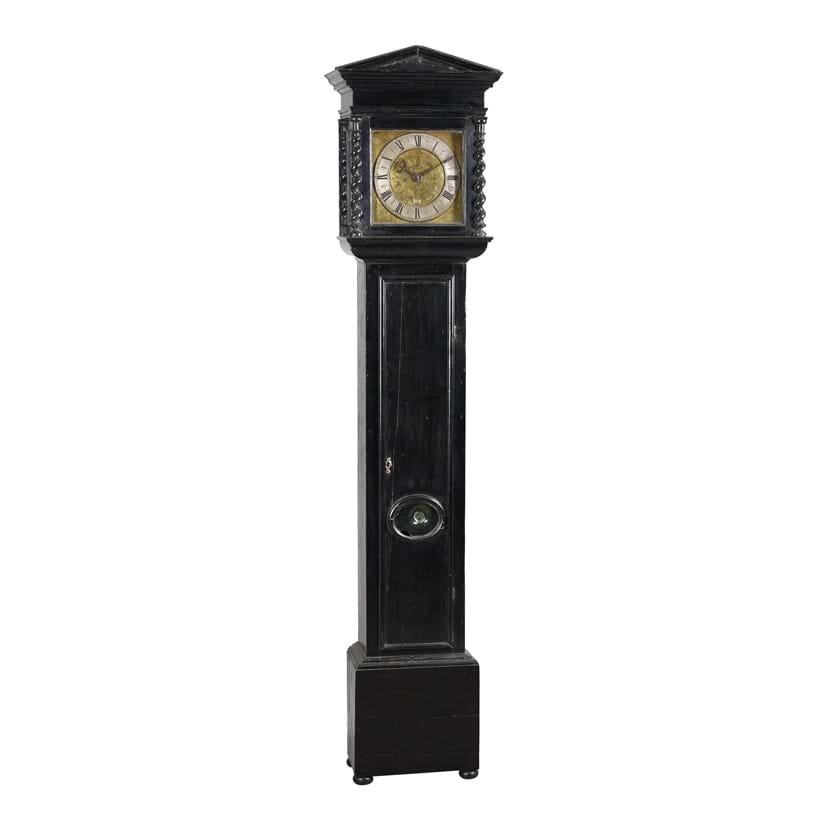 The dial is finely engraved with figures morphing into bold foliate scrolls, depicting a Centaur with a bow and arrow, challenging a dolphin over a trumpeting putto. The upper spandrel are further engraved with reclining naked figures of Chronos and a cellist, while the lower spandrels contain stylised foliate designs. The extraordinary engraved decoration to the dial of the current lot is both very fine in its execution and highly original in its design. 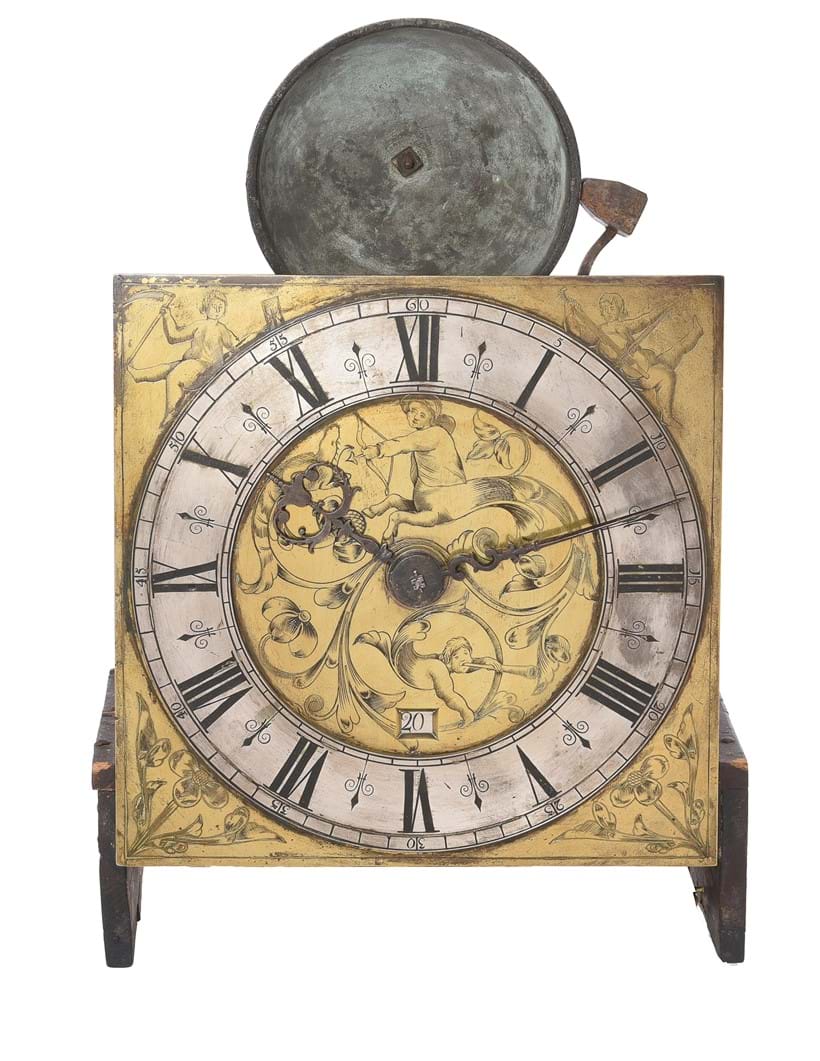 Furthermore, the ebonised pine case is a notably rare survivor. The hood has the early feature of large side windows and has not been cut for a door at the front. Although it retains its original rising channels to the rear inner edges, the corresponding tongues to the backboard are no longer present hence it can now be drawn forward rather than having to be drawn upwards to expose the dial. The trunk door is also fitted with a rare form of 'eagle-head' cast brass key escutcheon mount which is only generally seen on early architectural cases.

Another interesting piece is Lot 183, a fine and Rare William and Mary small figured walnut eight-day longcase clock. It was made by Christopher Gould, London, circa 1690. Gould is generally regarded as one of the leading makers from the 'Golden Period' of English clockmaking. 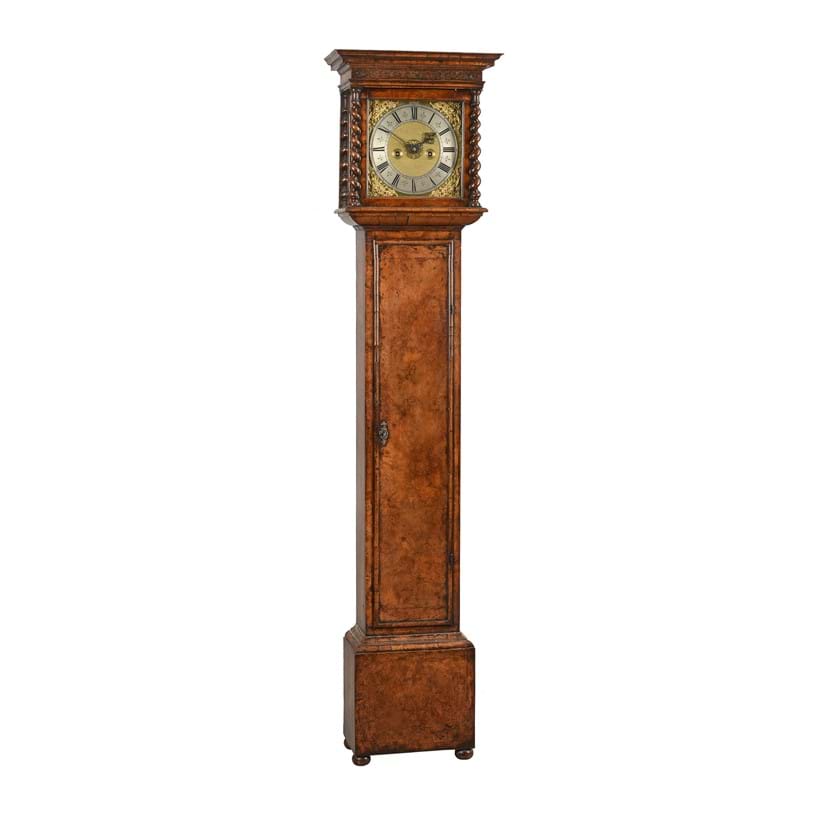 Many examples of Gould's work survive and are generally of very high quality in both their construction and design. The movement of the current clock is finely made with six latched pillars and the case can perhaps be justified in being described as perfect in its proportions. Furthermore the use of fine figured veneers uninterrupted by a lenticle (or any other form of decoration) exhibits a degree of restrained sophistication that places it amongst the best examples of the period.