Dreweatts welcomes in the New Year 2019 and, with a nod to warmer climes, announces European Collections on 23 January at Donnington Priory.

Comprising three private collections, from Spain and two from Italy, each bears the distinctive stamp of its owners having been collected and loved over several generations.

In the style of Gerrit Jensen

From the hills of southern Spain, An Andalusian Finca (lots 1-141) comprises Continental, Jacobean and Georgian furniture, objects and works of art as well as English ceramics and silver and paintings.

Within the wide group of furniture, lot 15, (£800-1,200 +fees) is a Continental sycamore marquetry knee hole desk dating from circa 1700 and later. The hinged top, front and sides are decorated with scrolling foliate motifs and strapwork overall. Its style is consistently described as ‘Westphalian / Style of Gerrit Jensen. Gerrit Jensen was the leading cabinet maker in the reigns of William and Mary and Queen Anne; his style was French and he was the only maker of the era to use metal inlays and elaborate arabesque marquetry. Nothing is known of Jensen’s origins nor his age when he died in December 1715. However, between 1680 and 1714 he crops up regularly in the Lord Chamberlain’s accounts for furniture supplied to all the royal palaces as well as the House of Commons and the royal residence at Newmarket. 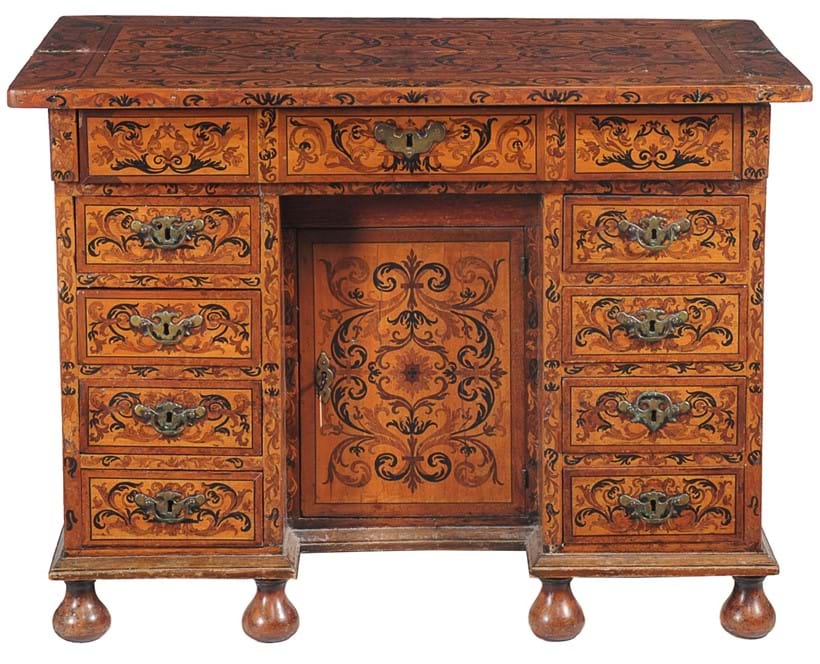 Lot 93, detail, (£700-1,200 +fees), a Continental carved and giltwood framed wall mirror dates from the late 18th century. Its vase finial is flanked by scrolling foliage, above a later rectangular plate.

From some 100 years later, lot 54, (£800-1,200 +fees) is a substantial, well proportioned late 19th century carved walnut and woolwork upholstered sofa in Queen Anne style, with scrolled back and arms. It sits on cabriole legs beneath shells and measures 2 metres wide, illustrated right. 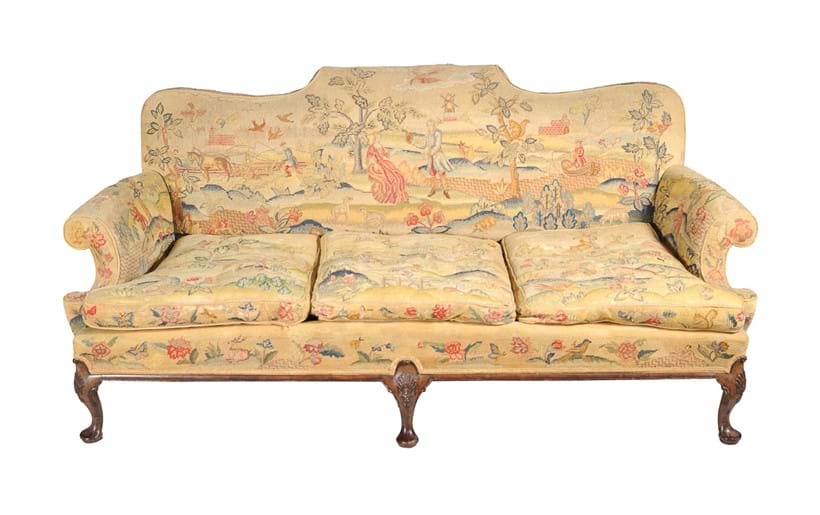 This collection features a number of highly decorative early wood carvings, one of these, lot 68, (£500-800 +fees), comprises three northern European late 17th century carved term figures of musicians. They are portrayed standing and playing the lute, drum and tambourine. Each figure is carved with festooned and spiralled robes, strongly influenced in style by the Baroque. The attire contrasts with the relatively simple, albeit endearing, modelling of their faces. The group may well represent ‘angel musicians’ – a popular theme in Northern European art since the 15th century.

An oil on copper

This work by Carl Ludwig Hofmeister (Austrian 1790-1843), Koblenz Ehrenbreitstein und Staffendorf am Rhein, (est. £4,000-6,000 +fees), is an intricately executed oil on copper typical of the artist’s style and subject matter. It is dated ‘Wien 1828’, the year in which the fortress, Ehrenbreitstein,  depicted in the background of the work on the east bank of the River Rhine, was completed. The focus in the work however is on several adults and children engaged in various harmonious pursuits, playing musical instruments,  conversing and going about their business on a mount in the shadow of Koblenz’s  church spire.

Ehrenbreitstein was re-built by Prussia from 1817 and it guarded the middle Rhine region an area which over the years had been repeatedly invaded by French troops. 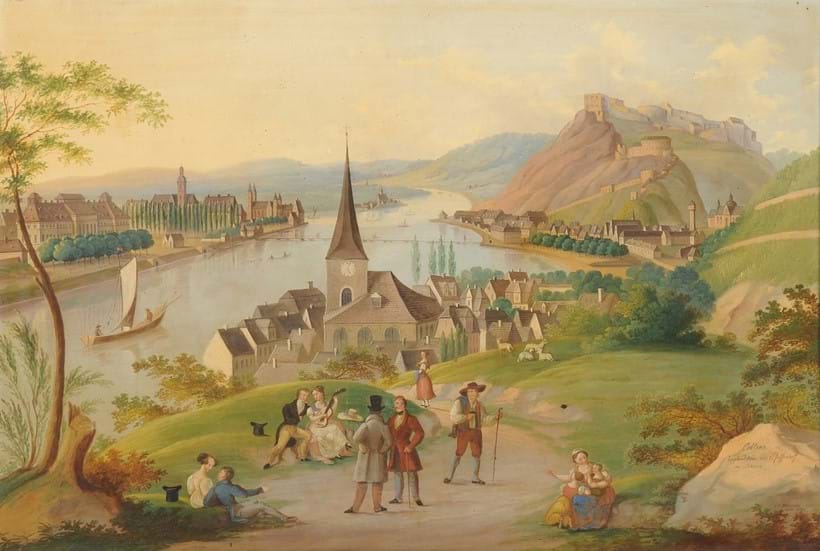 The city apartment of a Neapolitan family (lots 142-198) overlooks the Bay of Naples, and its contents have been brought together by several generations.

The family home was decorated with several works by artists who lived and worked in Naples.

Lot 194, Street scene with figures, oil on paper (est. £400-600 +fees), is by the Naples-born artist Vincenzo Migliaro (Italian 1858-1938). In 1875 Migliaro enrolled at the Naples Academy of Fine Arts where he studied under the hugely influential artist Domenico Morelli, Director of the Academy, and known for his historic and religious works. Migliaro’s main source of inspiration was always to be the city of Naples and its highly animated scenes from everyday life. The works he exhibited at various national and international exhibitions further contributed to his reputation as a keen observer of Neapolitan life. This petite work is possibly from the later stages of his career given the strong strokes used to capture the atmospheric sky which makes up nearly half of the image. 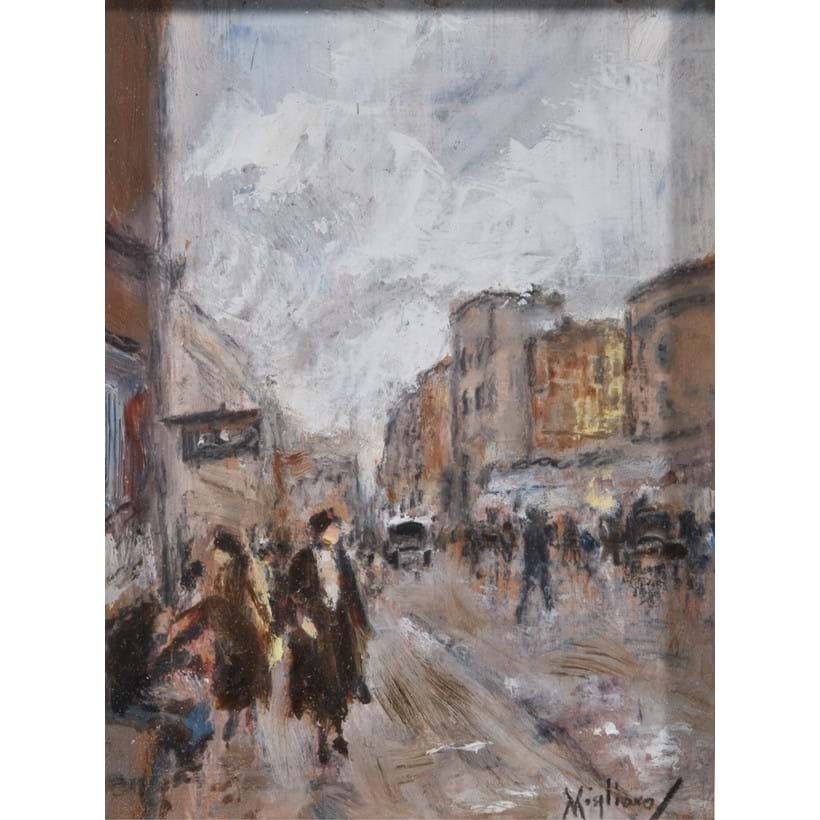 Young girl sitting in the garden, (est. £400-600 +fees) lot 185, an oil on canvas, is by Luca Postiglione (1876-1936). Postiglione was born in Naples and is renowned for his portraits and historic and genre subjects. His painting style can be termed Realist – devoid of artistic convention and aiming for a truthfulness in representation. The young girl sits in sunshine and she is taken with a plant in a pot, the background an almost uniform design in shades of green while her skirt is visible through the foliage and flowers of the foreground. 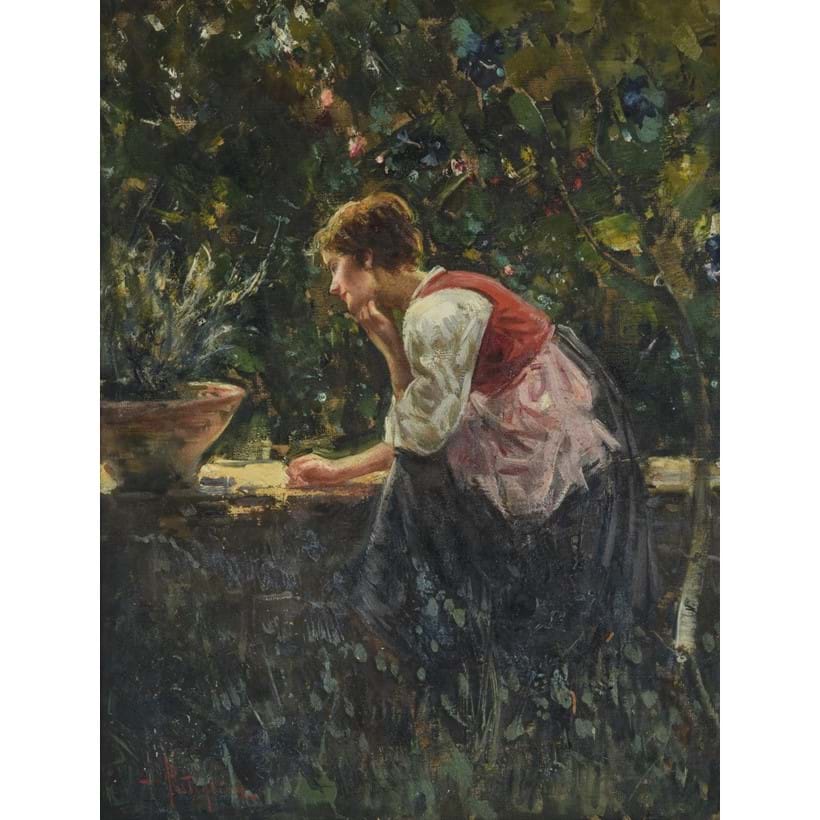 Lot 187, The annunciation, an oil on canvas (est. £400-600 +fees), comes from another graduate of the Naples Academy, Gaetano Bocchetti (Italian 1888-1990), who was also born in Naples. The painting demonstrates his lively colour work and over his career his output covered an extremely wide range of subject matter, from figures, to landscapes and still life. His temperament has been identified as southern Italian in that he gave equal prominence to both the figure and landscape in his art. Bocchetti exhibited at the Venice Biennale in 1920, the 1921 Quadriennale of Rome and in 1923, at the national Biennale of Naples.

Bocchetti was also a prolific decorator and inspired by paintings from the 16th and 17th century he created many frescoes, the first of these dates from 1918 for the Church of San Massimo in Orta di Atella, close to Naples in the region of Campania. 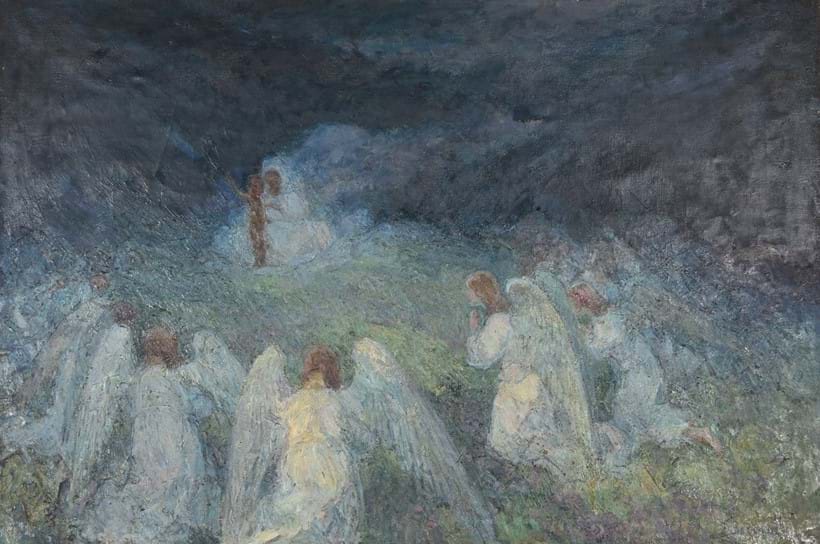 Deer after the Antique

The Neapolitan theme continues with lot 170, a pair of patinated bronze models of deer after the Antique, (est. £300-500 +fees), dating from circa 1900. The animals are portrayed standing, with stylised features and on rectangular moulded bases.

The bronzes were cast after an early 1st century AD Roman pair, found in 1756 in the garden of the Villa dei Papiri at Herculaneum located in the shadow of Mount Vesuvius. These Roman deer are currently to be found in the collection of the Museo Archeologico Nazionale in Naples. 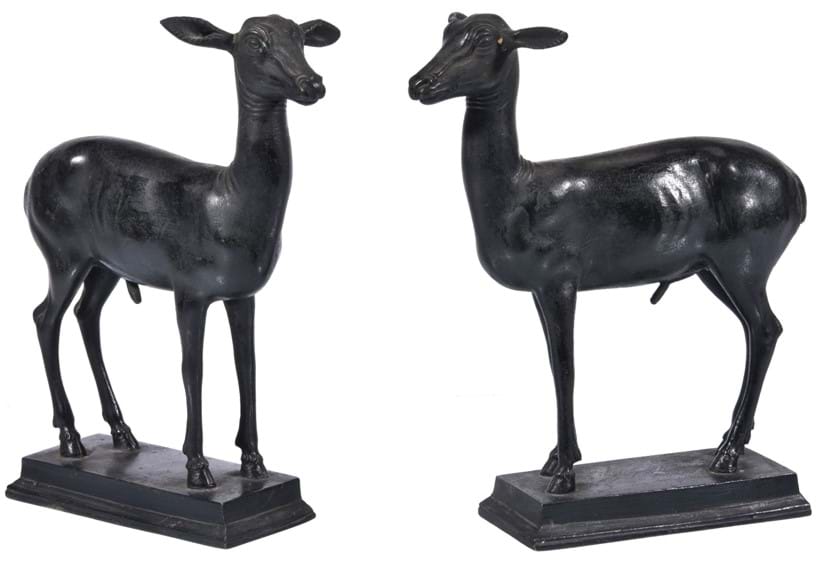 The third collection, (lots 199-249), comes from an apartment in Centro Storico, Rome, located close to the Pantheon. The contents trace the family's ancestry back to their Belgian roots of the Comptes Van den Steen de Jehay, previously from the Château de Jehay, near Amay in the province of Liège, Belgium.

This 18th century tapestry is impressive not only because of its size but also due to its well-preserved state. It depicts a lively figural scene outside a country inn, with groups playing cards and raising glasses. To the right of this merry gathering a lady is shown extending her hand to a heavily draped male figure in a headdress, possibly a visiting gypsy. This fascinating and unusual interaction takes place in an expansive landscape, the middle distance features houses, a barn and church with mountains rising in the distance. The scene sits within a border of scrolling foliate and rocaille motifs.

A number of fine oil paintings from the 18th and 19th centuries attributed to Flemish, Dutch, Italian, Neapolitan and Continental Schools feature too.

The work here is by the Belgian artist Nicholas Henri Joseph Fassin (1728-1811). Fassin was born in Liège and had he fulfilled his family’s wishes he might have pursued a career as a magistrate. However, by the age of twenty he was serving in the French army and only studied art at the Academy of Antwerp when thirty four years old. He travelled and painted extensively in Italy and Switzerland, living for some time in Geneva. In the late 1760s he depicted Voltaire dressed in his nightcap and dressing gown and at the height of his career he painted a landscape for Catherine the Great. 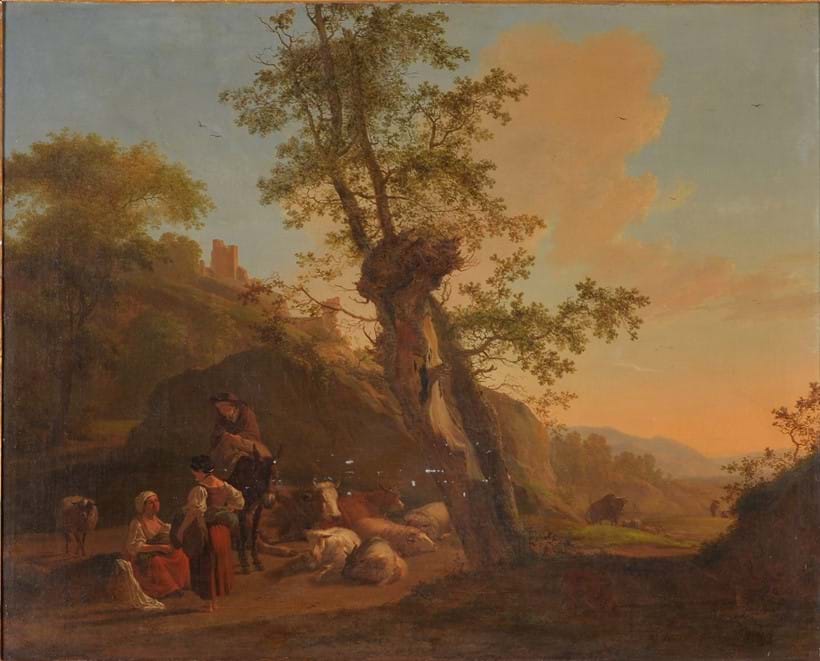 The oils are accompanied by a group of portrait miniatures with two lots by Jean-Baptiste Jacques Augustin (1759-1832) - one of the most significant artists of the era working in this format. Lot 243, (est. £4,000-6,000 +fees), an enamel portrait of a young lady wearing jewellery and a blue dress is signed and dated le Ch er. Augustin 1826 and the French inscription indicates it was created for Me. Morel. Lapidaire quai de l’horloge. In the Almanach du commerce Paris, from 1805, Morel is listed as a lapidaire at 48 quai de l’horloge, Paris.

Augustin also taught, with his pupils exceeding 400 in total. In 1814 Louis XVIII appointed him peintre ordinaire du Cabinet du roi and five years later he became peintre en miniature de la Chambre et du Cabinet du roi, and in 1821 he received the Légion d’honneur. His subjects included Napoleon I and his family, the Prince de Condé, the Duke d’Orléans and the socialite Juliette Récamier, amongst many others. 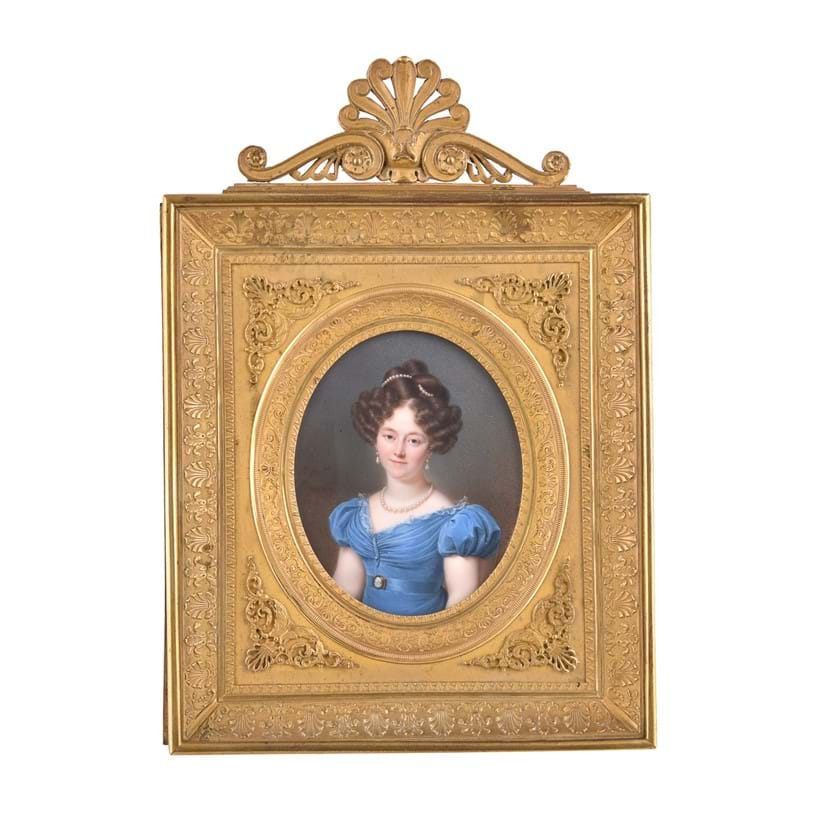