On Thursday 27 May, we have our Old Master, British and European Art auction. A highlight is Lot 255, A group portrait of The Broadlands Conference by British artist Edward Clifford (1844-1907). Here, we take a closer look at some of the sitters. 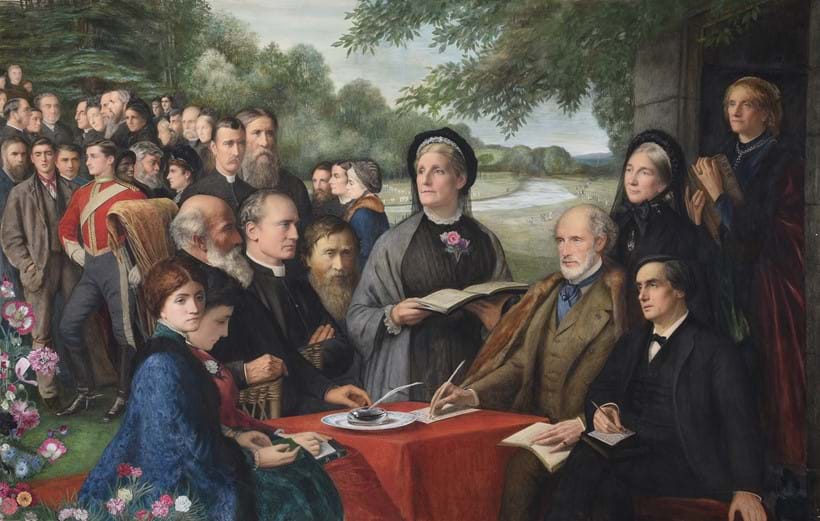 In this impressive group portrait Edward Clifford portrays the infamous Broadland conference of the Higher Life. This annual conference, founded by William (Sitter 1) and Georgina Cowper-Temple (Sitter 2) was held at their country estate Broadlands in Hampshire between 1874 and 1888.

The conference assembled religious interests precipitated by the Holiness movement in America and the emergence of the Higher Life in England during the 1870s which was named after William Boardman’s book The Higher Christian Life (published in 1858). Enabling one to live a more sacred and less sinful life, the Higher Life movement aimed at advancing the Christian’s progressive sanctification.

The sitters in this painting, many of whom have been named by Edward Clifford, held great prominence in helping to spread the holiness message of the Higher Life movement in England and their presence highlights the social and geographical diversity of those that attended the Broadlands conferences.

William, 1st Baron Mount Temple was the second son of Peter Cowper, 5th Earl Cowper and the Hon. William had an illustrious political career as a Member of Parliament for over forty-five years, Private Secretary to his uncle Lord Melbourne and groom-in-waiting to Queen Victoria. 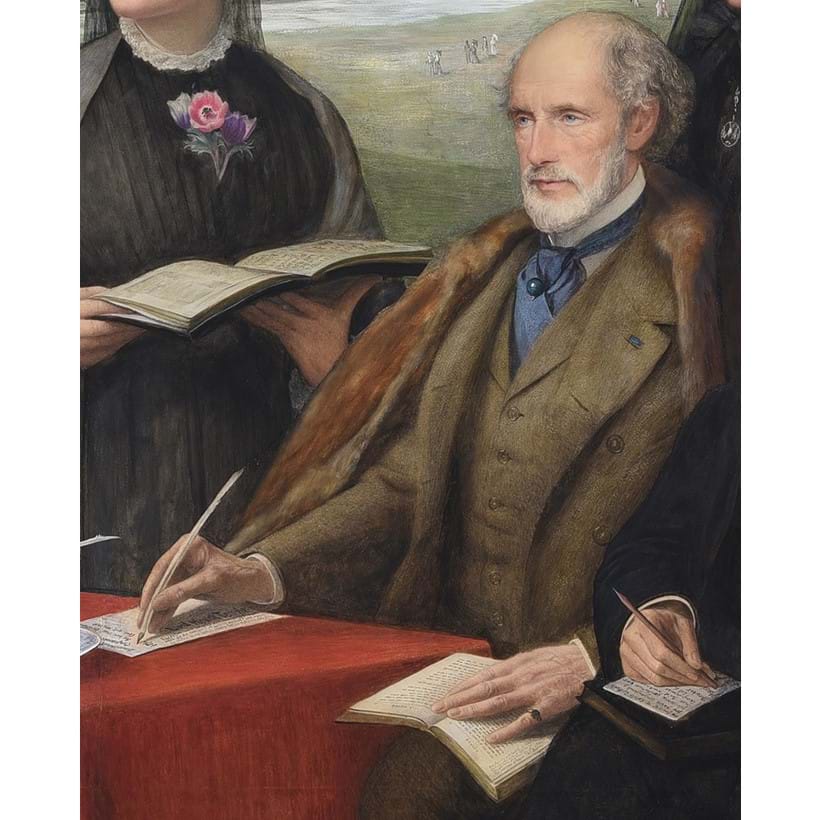 Identified in a tweed suit seated at the table, William is depicted writing a note which carries the title, Broadlands Conference 1874 and ‘See how these Christians love one another’. William and his wife Georgia shared an interest in Evangelical Christianity and embarked on a search for religious enlightenment upon which the annual conferences were founded. The prayer “Therefore with angels and archangels, with all the company of heaven we laud and magnify thy glorious name wherein are praising thee and saying Holy, Holy, Holy” is also featured on William’s note.

In the painting he has signed his name on the note as Lord Mount Temple. His paternity is uncertain owing to his mother’s numerous lovers. When his mother died in 1869, William inherited a number of estates under his stepfather's will, and so took that year, under Royal licence, the additional surname of Temple. The properties included a 10,000 acre estate on Sligo’s Mullaghmore Peninsular with its unfinished Classiebawn Castle, commissioned by his stepfather, which he completed by 1874. In 1880 he was raised to the peerage as Baron Mount Temple of Mount Temple in the County of Sligo. This was a revival of the junior title held by the Viscounts Palmerston which had become extinct along with the viscountcy on his stepfather's death in 1865.

Georgina Tollemache, seen in the upper right hand corner of the painting, was one of nine daughters and three sons of Admiral John Richard Delap Tollemache and was the second wife of Lord Mount Temple. Georgina was also champion of diverse social and moral reforms, and friend to John Ruskin, Dante Gabriel Rossetti, Frances Power Cobbe, and Mrs Oscar Wilde. 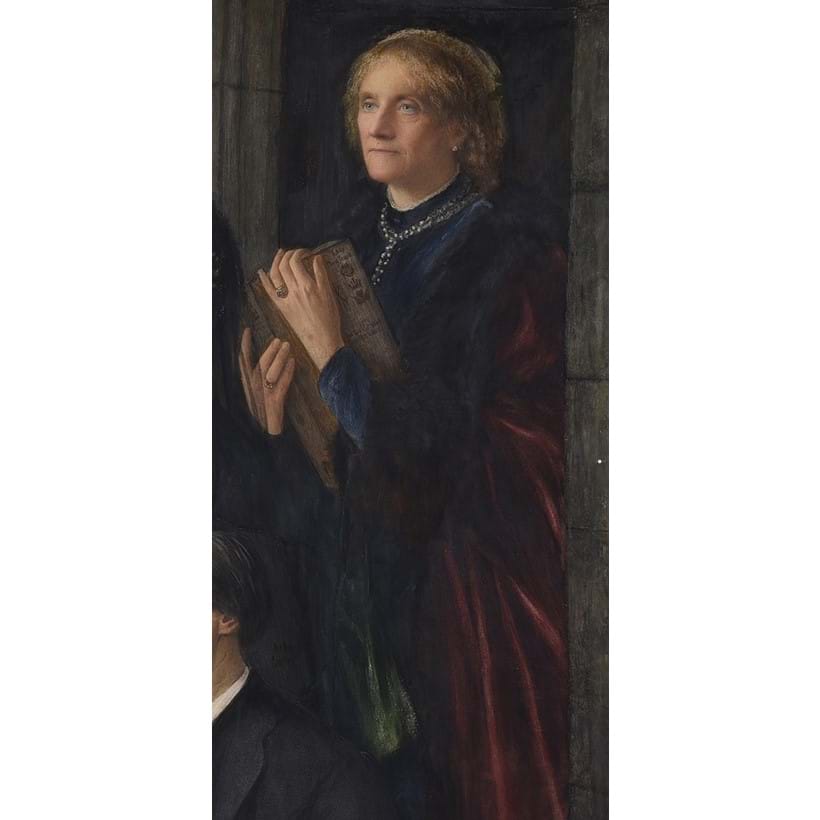 Georgina had a particular interest in mysticism and mixed with leading spiritualist figures form Britain, American and Europe, attending regular séances which she organised throughout the Conferences. The group of white dressed figures (as seen in Figure 1 below) in the landscape may represent souls who were being contacted in séances held by Georgina.

The other groups (as seen in Figure 2 below) must represent the guests enjoying the beautiful parkland at Broadlands designed by Capability Brown and the River Test. The surroundings at Broadland were aimed to create a “foretaste of heaven” with many of the services occurring under the Beech trees or in the orangery. 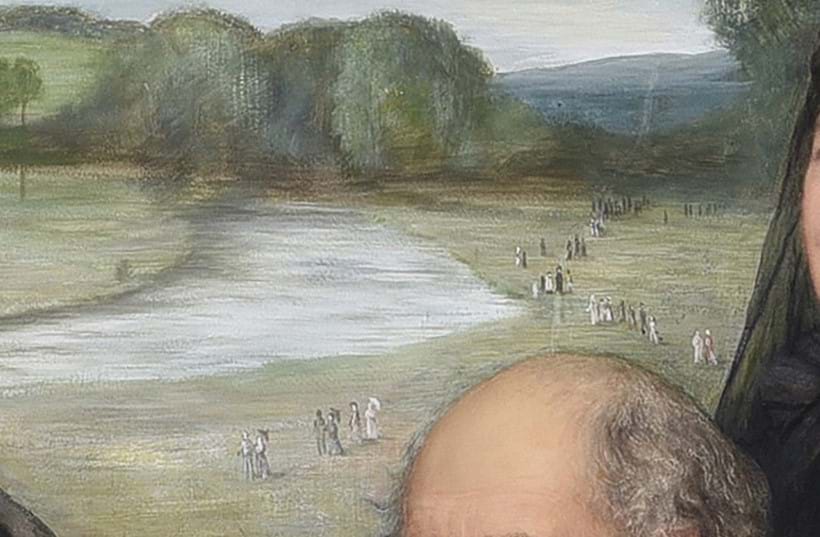 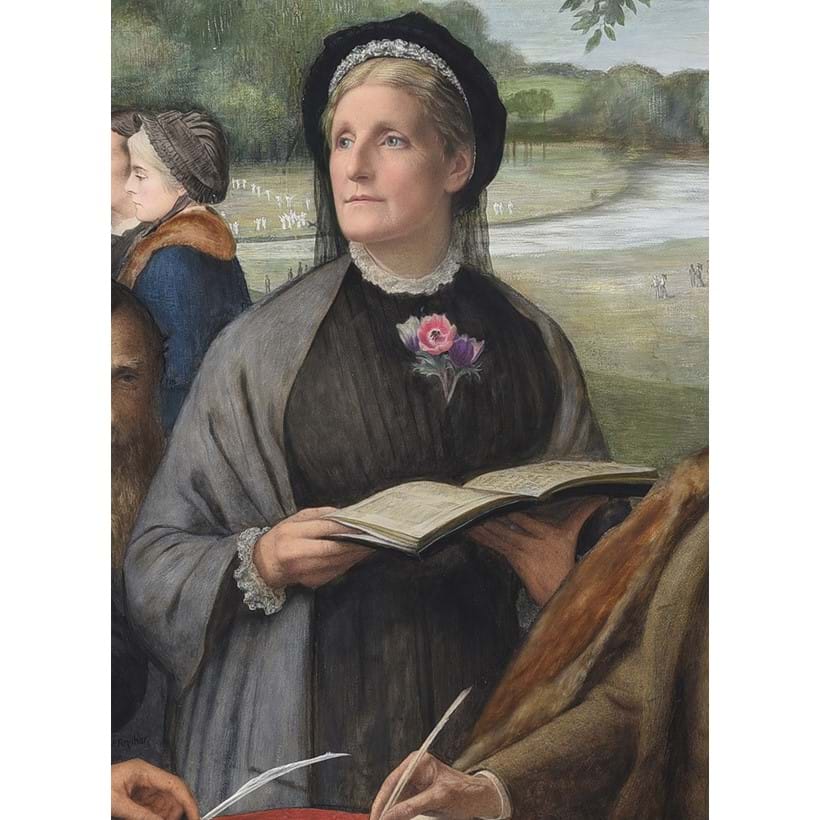 Hannah spoke at the first Broadlands Conference and holds a central position in this paintings composition which highlights her provenance in spreading the holiness message in England. She was married to Robert Pearsall Smith who is not present in the work. Their daughter, Mary, married, as her second husband, the Art critic Bernard Berenson. Their other daughter Alys married Bertrand Russell.

Due to a sexual scandal involving Robert, their visit to England came to an abrupt halt. It is possible that her Anemone corsage represents ‘forsaken love’ which may be a reference to the scandal involving her husband. Their marriage came under serious strain through Robert Smith's persistent adultery and Mrs. Smith's advocacy of strong feminist views of the role of women that were contrary to the patriarchal ideas dominant in their time. Moreover, the text that Hannah holds appears to read “It is better to put one’s trust in the Lord than to put one’s confidence in men” followed by “Hannah Whitall Smith”.

This sitter remains unknown, however, does not lack intrigue. 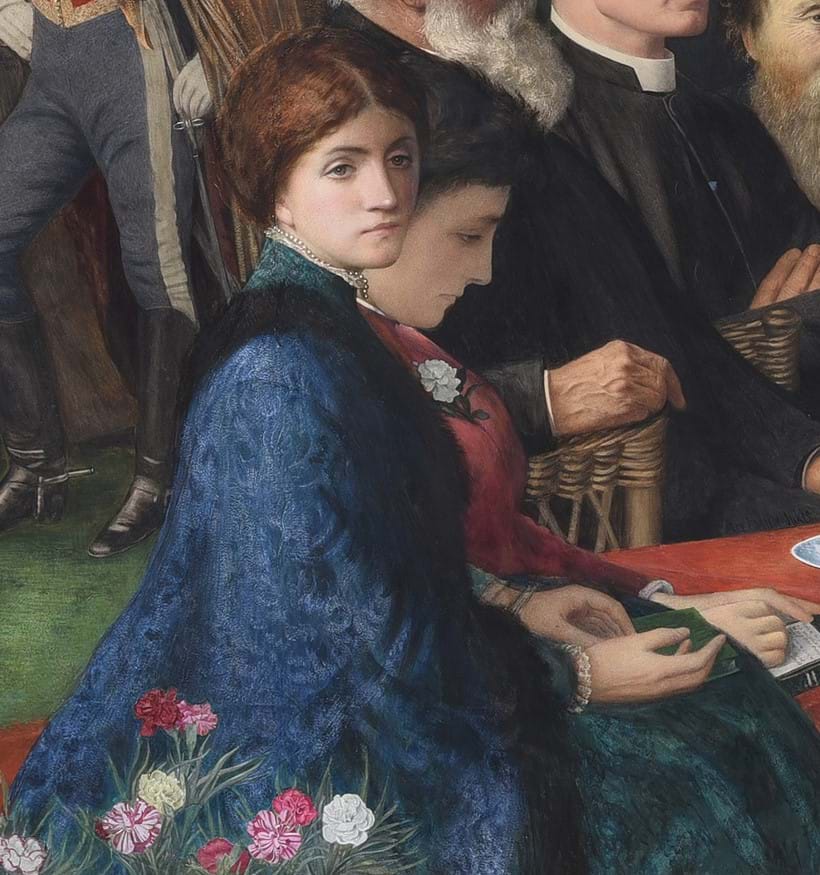 While she bears a striking resemblance to Georgiana Burne-Jones, it seems unlikely as no record of her attendance at the Broadlands conference exists. However her husband, the Pre-Raphaelite painter, Sir Edward Burne-Jones, was a friend of Edward Clifford, who owned and copied many of his paintings. According to Angela Thirkell, Burne-Jones’s granddaughter, ‘He had a peculiar gift for copying his paintings so that my grandfather himself could hardly tell the difference.' Furthermore, In 1874 Georgiana would have been 33 years old, and this woman appears to be younger.

The figures are identified, left to right