Dreweatts is delighted to have been entrusted with the sale of the selected contents of Barnwell Manor, Northamptonshire, home to the internationally renowned Windsor House Antiques in our auction of Fine Furniture, Sculpture, Carpets, Ceramics and Works of Art on Wednesday 7th & Thursday 8th September 2022. 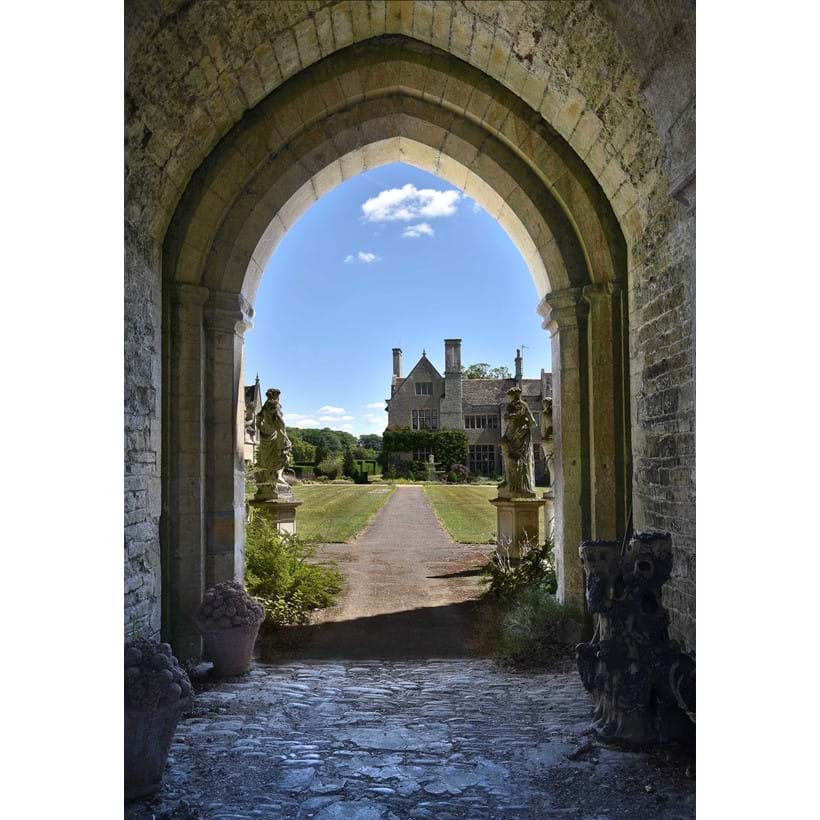 Barnwell Manor is the former home of the Duke and Duchess of Gloucester. Encapsulating interiors designed by Professor Albert Richardson and Princess Alice, Duchess of Gloucester, it is set in the idyllic Northamptonshire countryside and has been the home of Windsor House Antiques since 1999. Under the stewardship of Kevin Smith, Windsor House Antiques has become an important and well-respected source of fine and applied arts for a global base of interior designers and private collectors.

As collectors are once again choosing to engage with the country house aesthetic, Kevin has chosen this moment to open this Aladdin’s cave and offer a selected group of items for sale by auction. The sale will include a curated offering of important and decorative furniture, paintings and works of art including provenances from some of our great houses and historic collections. 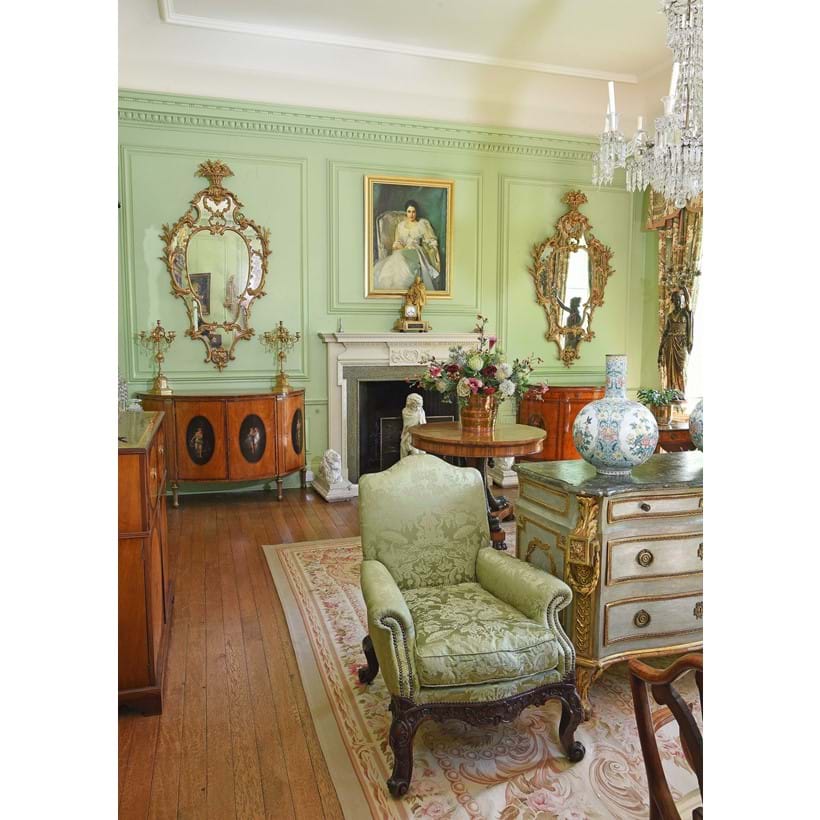 This atmospheric house, medieval castle and the surrounding gardens will form the dramatic backdrop to the sale, with the full sale view being hosted on the premises, affording collectors and connoisseurs the rare opportunity to see and acquire beautiful and sometimes unusual objects within a wonderfully historic context.

An ‘insatiable appetite’ for collecting

Kevin’s love of wonderful antiques and fine art has resulted in a lifetime of collecting. At the age of five his mother gave him a shilling to spend at a school fete and since then has used varying degrees of ‘pocket money’ to enthusiastically enact his passion for antiques.

His career has been varied, colourful and sometimes unconventional - during his long career he has had antique studios all over the world, including in London, Amsterdam, Los Angeles and Hong Kong. Kevin has served for 23 years as vice-chairman of LAPADA, and spent a great deal of his working life on the road selling and sourcing. For over 60 years Kevin has immersed himself in the business, collecting avidly and learning as he went along.

A first highlight of the sale, is an important George III figured mahogany serpentine commode in the manner of Thomas Chippendale (Lot 128) formerly from the Irwin Untermyer collection - considered one of the world’s greatest private collections which now resides on permanent display at the Metropolitan Museum of Art in New York. 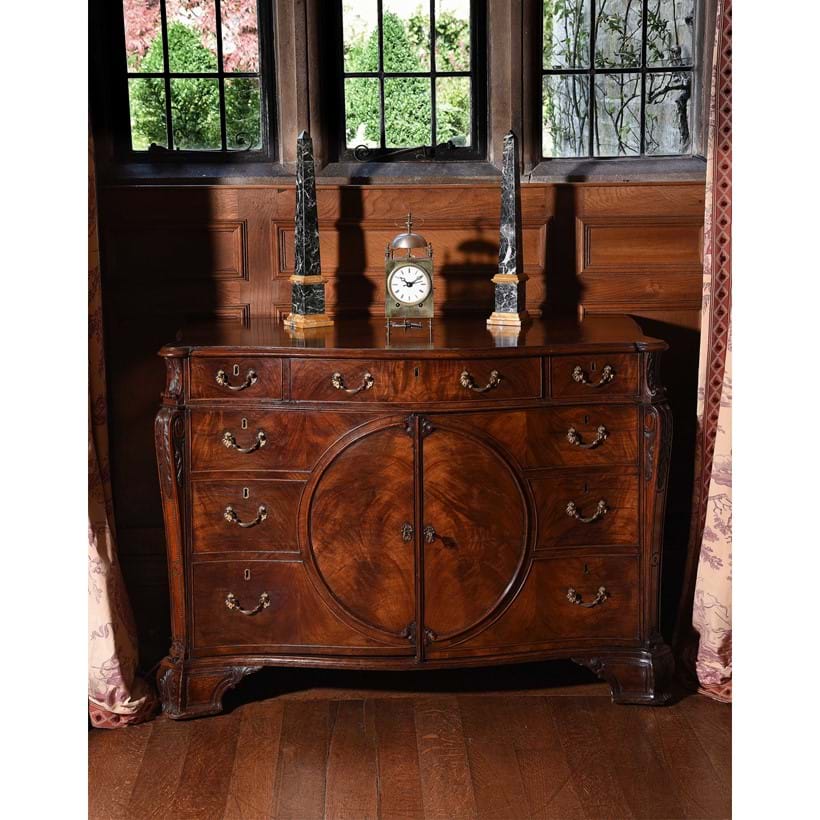 What is clear is Kevin’s compulsive and affecting desire to form and collate a collection which is unapologetic in its breadth, depth and evident quality. This insatiable appetite for collecting pieces of quality and historical importance has given rise to a cornucopia of objects, from over 60 years of experience and assiduous collecting.

Dreweatts Head of Sale, Ben Brown, said, "Having admired the business and its highly curated collection for many years, I am proud for Dreweatts to have been entrusted with the Windsor House Antiques sale. It represents a cross section of the style and quality Kevin has offered for over sixty years and illustrative of a passion and compulsion for beautiful things I am sure many can recognise in themselves."

Further highlights from the collection include Lot 39, a rare set of eight George II walnut chairs, dating to circa 1730. These were once owned by Robert Wood Bliss (1875-1962), an American diplomat, who co-founded the Dumbarton Oaks Research Library and Collection in Washington D.C.

During the Second World War (1942-1945), Bliss worked at the State Department, during which time he arranged a succession of important diplomatic meetings at Dumbarton Oaks in 1944 known as the 'Dumbarton Oaks Conference' whose delegates collaborated over proposals for the foundation of an organisation to maintain world peace and security. The culmination of these meetings was the 'United Nations Charter' which was adopted in San Francisco in 1945. In later life, Bliss held a number of senior positions with American art institutions, museums and political organisations including the American Federation of Arts, the Smithsonian Art Commission, the Carnegie Institution and the American Foreign Service Association. 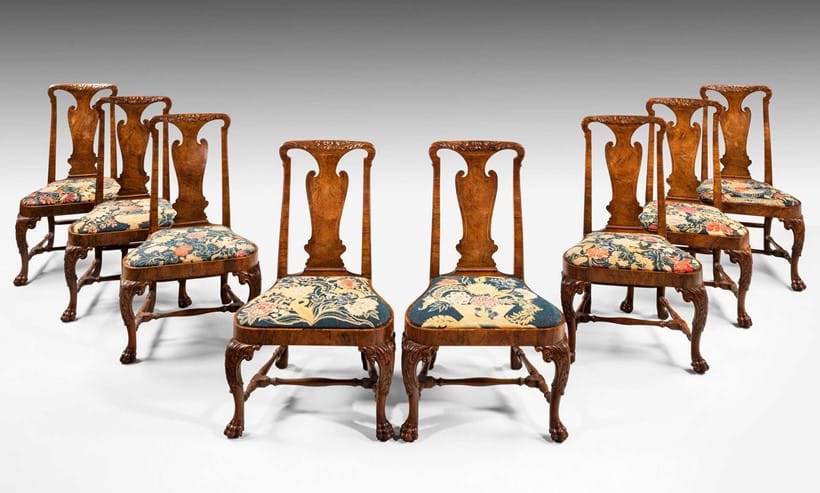 This distinctive set of George II walnut chairs exhibit an unusual combination of features which do not appear to be clearly identifiable with the work of a particular maker or regional origin. Whilst the idiosyncratic paw feet have affinities with those of Irish tables and chairs documented by Peill and Glin (op. cit. pp. 106-119), the scrolls to the inside of their 'paws' are without parallel in this most recent survey of Irish furniture. Furthermore the turned and square H-shaped stretchers contrast with the more prevalent flat H-shaped stretchers found on Irish chairs of the second quarter of the 18th century. Other atypical details of the present lot's design are the herringbone bandings to the splats, the finely carved foliate mouldings surrounding the backs and the gadrooned splat shoes.

We then have Lot 82, an Irish George II carved mahogany centre table of rare form and originality. This elegant piece is designed with a fine book matched top above a carved frieze, featuring a central mask, surrounded by C-scrolls and swags. The cabriole legs have shell carved knees and are finished with lion paw feet. 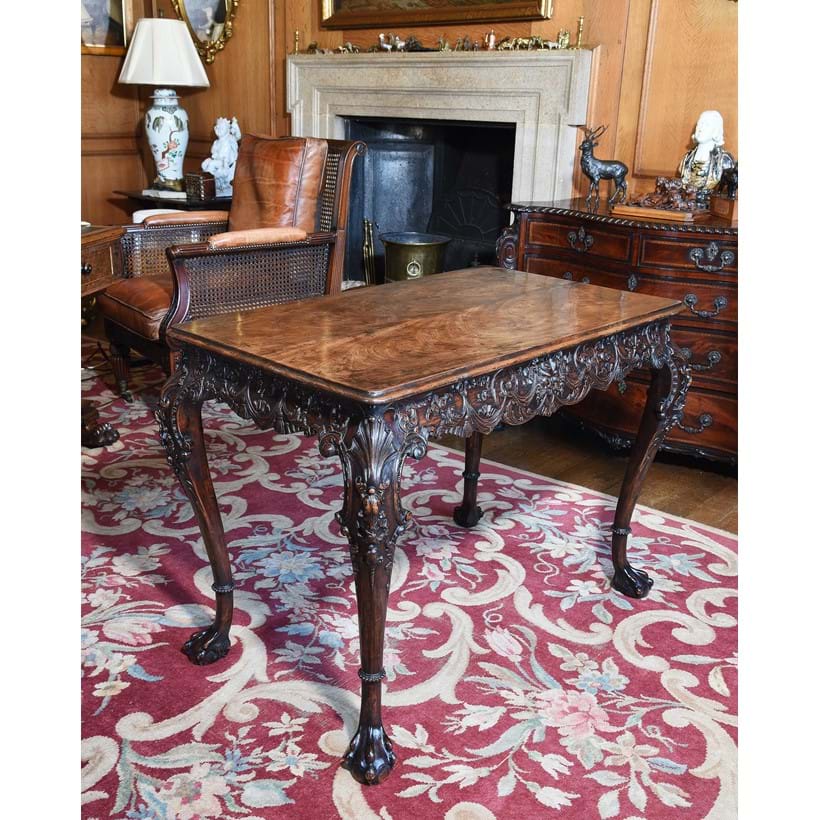 From the selection of works of art, there is this magnificent large pair of Italian 19th century ormolu mounted red porphyry and white marble obelisks. These were later mounted in the manner of Valadier. Each is of typical form, with foliate-cast pricket finials, on ball feet, above a panelled plinth mounted with lion masks and a square stepped plinth base, on foliate-wrapped paw feet. 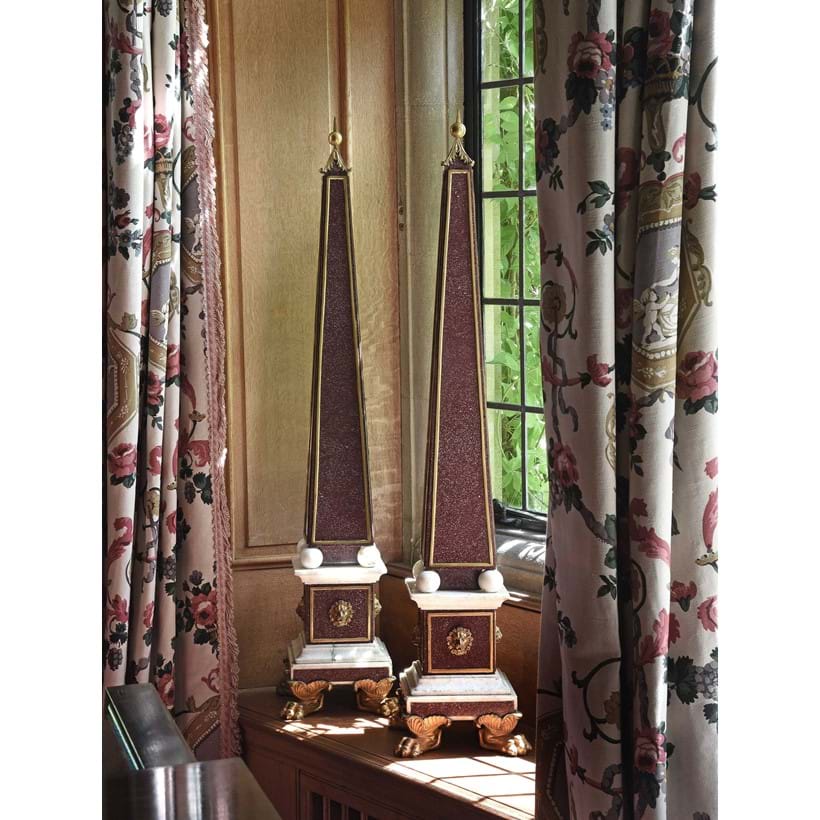 Finally, we wanted to highlight Lot 375, a rare pair of French parcel gilt and bronze figural torcheres by Barbedienne and Guillemin, dating to circa 1870. The 'Deux Femmes Japonais' were cast by Ferdinand Barbedienne from the models by Emile-Coriolan-Hippolyte Guillemin (1841-1907). They are made in the form of standing Japanese female figures, wearing traditional Japanese dress, their kimonos embroidered with cranes and prunus respectively, each figure depicted holding aloft five candle arms in the form of lilies. These were formerly gasoliers, but are now wired for electricity, on gilt metal mounted and inset onyx bases. Each is signed to cast "E le Guillemin" and "F. BARBEDIENNE FONDEUR". 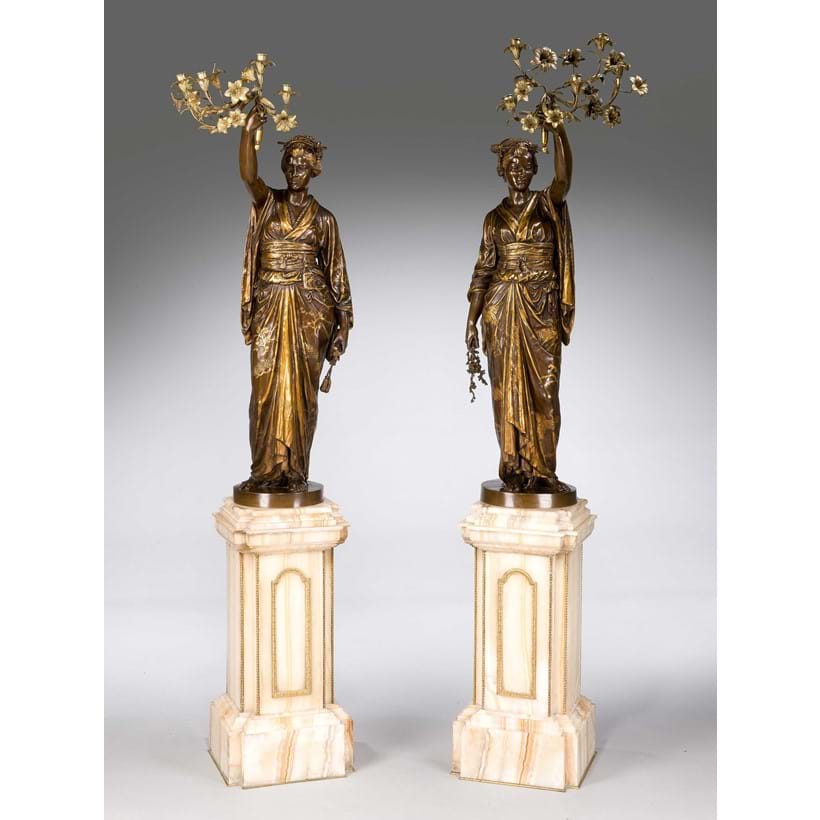 The figures had been designed by Guillemin, a noted sculptor and regular exhibitor at the Paris Salon. Barbedienne evidently liked this particular model as he chose to place a version of this pair outside the front door of his family house.