Coming up on 8 & 9 March, we have our auction of Fine Jewellery, Silver, Watches and Luxury Accessories. The auction includes a private collection of silver stashed away in boxes by an English gentleman who started a collection in the mid-19th century, recently found by the current generation of his family decades later. The fascinating treasure trove was found to contain forty exceptionally rare early spoons, some from as far back as the 1400s, from the reigns of Henry VIII, Elizabeth I, James I, Charles II, joint sovereigns William III & Mary II.

Such a large collection of early spoons is rarely seen on the market and as well as being highly decorative, are of the highest quality silver and rare examples in their own right. The spoons range in estimate from £100-8,000 (+ fees), and hold a collective conservative estimate total of £55,000. The entire stash (90 lots) carries an estimate of over £150,000.

James Nicholson, Deputy Chairman, International Head of Jewellery, Silver and Watches at Dreweatts said: "Dreweatts are delighted to present a stunning collection of antique and early academic silver which has been safely tucked away for more than 100 years and finally sees the light again in a sale of Fine Silver and Jewellery this Spring. While the family knew something important was stored away in the boxes, they had no idea of the extent of their contents.

The collection includes pieces from the 17th and early 18th centuries, from the reigns of James I, Charles II to the early Hanoverian kings. A large part of the collection is an exciting group of 40 early English Apostle, Seal Top and Trefid spoons dating from circa 1450-1700, with many being from the reigns of Henry VIII, Elizabeth I, James I, Charles I, Charles II and William and Mary. It is very rare for such a large and fine group of highly desirable early English spoons from a private collection to come to the market and even more exciting that the family had no idea what a treasure they had in their midst!”

Among the highlights of this rare collection of spoons (Lots 58-96), is a rare Charles II West Country Royalist memento silver Trefid spoon, believed to be made by esteemed silversmith Samuel Cawley in circa 1670. The word ‘Trefid’ means split into three parts and on Trefid spoons it’s the top of the handle that is divided into a decorative three-part finial. Trefid spoons are thought to have been brought to England in 1660 by Charles II, who saw them being used in the courts of France. They were colloquially known as ‘French Fashion Spoons’ and their popularity swept across the United Kingdom between 1660 and 1700.

The West Country was famous for producing Trefid spoons, which, although simple in form, often featured initials and family crests on them. The spoon in the sale (Lot 66) features the typical deep oval bowl of the early examples, as well as a flat stem leading up to its decorative three-part top. It also comprises a die-struck portrait of Charles II, C and R either side, prick-engraved initials and is dated A.S over E.M over 1672 to the back of the bowl. It carries an estimate of £3,000-5,000 (+ fees).

Excitingly in the collection is a pair of Elizabeth I West Country silver lion sejant spoons by revered maker Thomas Mathew, dating from circa 1580. Thomas Mathew was one of the most renowned goldsmiths in England. Such was his standing that he was awarded a place in the London Company of Goldsmiths in 1561. He was one of the first known goldsmiths in the Devon town of Barnstaple, where he built an excellent reputation for craftsmanship and some of his works are among the earliest works in existence from the area. He was also acclaimed for his help in the remaking of local chalices, including those of Woolfardisworthy, Landkey and Bishops Tawton in South West England. The term ‘lion sejant’ refers to the design at the end of the spoon, which sees a stunningly detailed gilded lion sat on a pedestal. The spoons comprise fig shaped bowls and facetted tapering stems. The pair (Lot 76) is estimated to fetch £6,000-8,000 (+ fees). 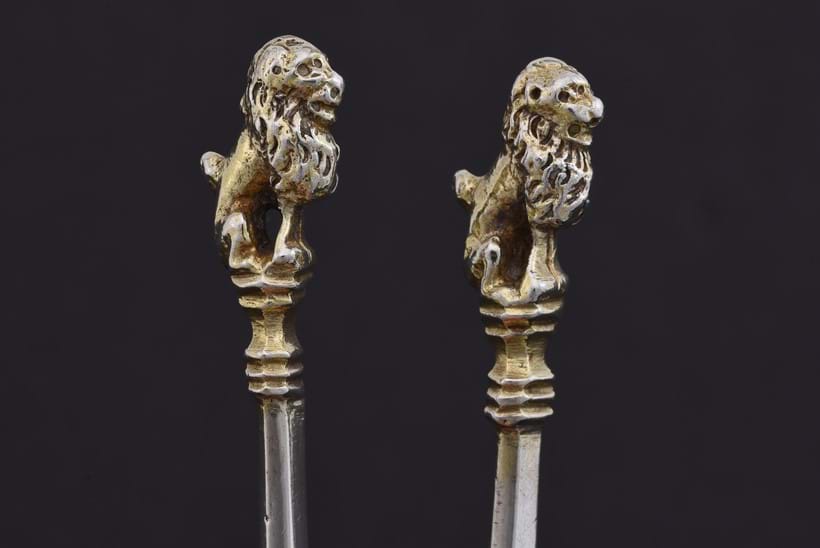 Also in the collection is Lot 87, a Henry VIII silver apostle spoon. Apostle spoons are the most recognised of all antique spoons, as their figural finials depict the 12 apostles, each identified by the emblems they carry. A further detail is on top of the apostle is a round disc (known as a nimbus), depicting a holy dove. Apostle spoons date from as early as the 14th Century and due to their popularity, were produced up until the 17th Century in England. This stunning example comprises a fig shaped bowl with the initials RO on the back and a facetted tapering stem. It has an estimate of £8,000-12,000 (+ fees). There are several other exemplary apostle spoons in the collection. 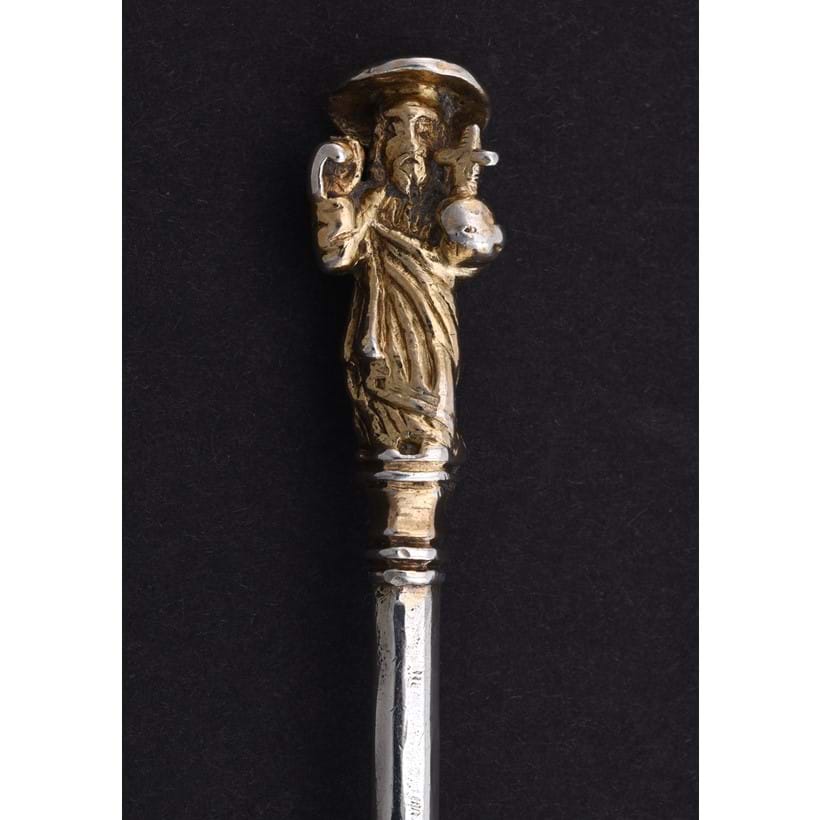