In our Chinese Art series, we are looking at the symbolism of animals in Chinese mythology. Here we look at dragons.

‘Long ago, there was a poor farmer who lived in a wild and rugged land, far from the great cities of China. One day when he was coming home from the fields, he came to a pond. There he stopped and stared in amazement. On the banks of the pond lay his wife, fast asleep. A great scaly dragon loomed above her. Clouds blackened the sky, lightning flashed, and the air shook with thunder. Months later, when the farmer's wife gave birth to a beautiful son, the couple were filled with joy. This boy grew up to become Emperor Gaozu, the first ruler of the Han dynasty.’

'The people paint the dragon's shape with a horse's head and a snake's tail. Further, there are expressions as 'three joints' and 'nine resemblances' (of the dragon)…His antlers resemble those of a stag, his head that of a camel, his eyes those of a demon, his neck that of a snake, his belly that of a clam sea monster, his scales those of a carp, his claws those of an eagle, his soles those of a tiger, his ears those of a cow.’ 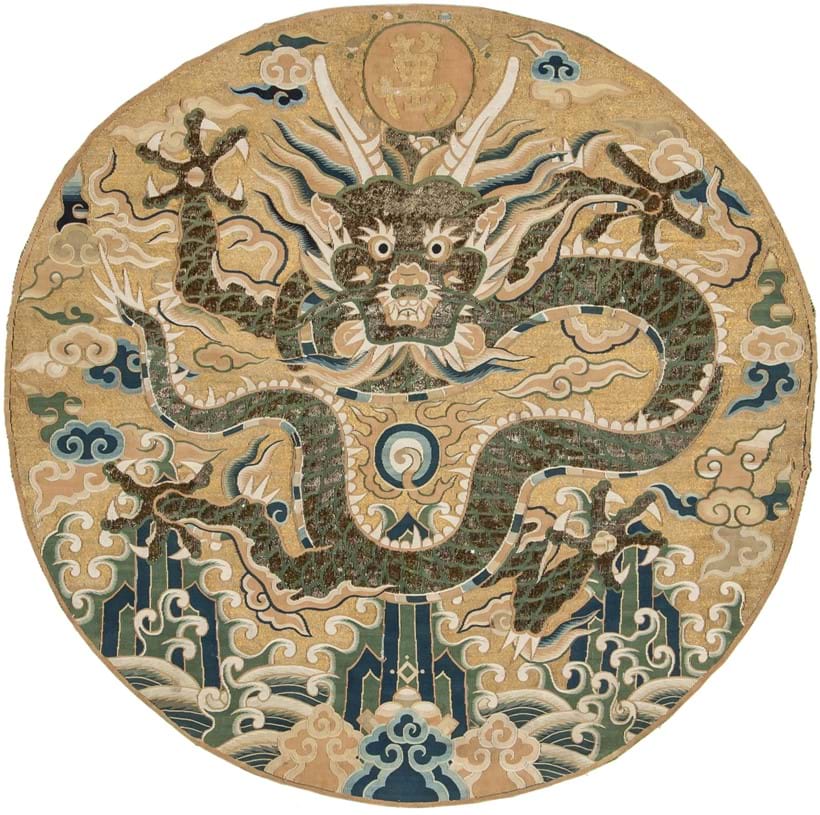 Awe-inspiring and the highest-ranking animal, dragons represented the collective forces of nature in Chinese history and were traditionally associated with the figure of the emperor. The Qing dynasty took the dragon robe to a whole new level. Its vast complexity was unrivalled in the history of China. 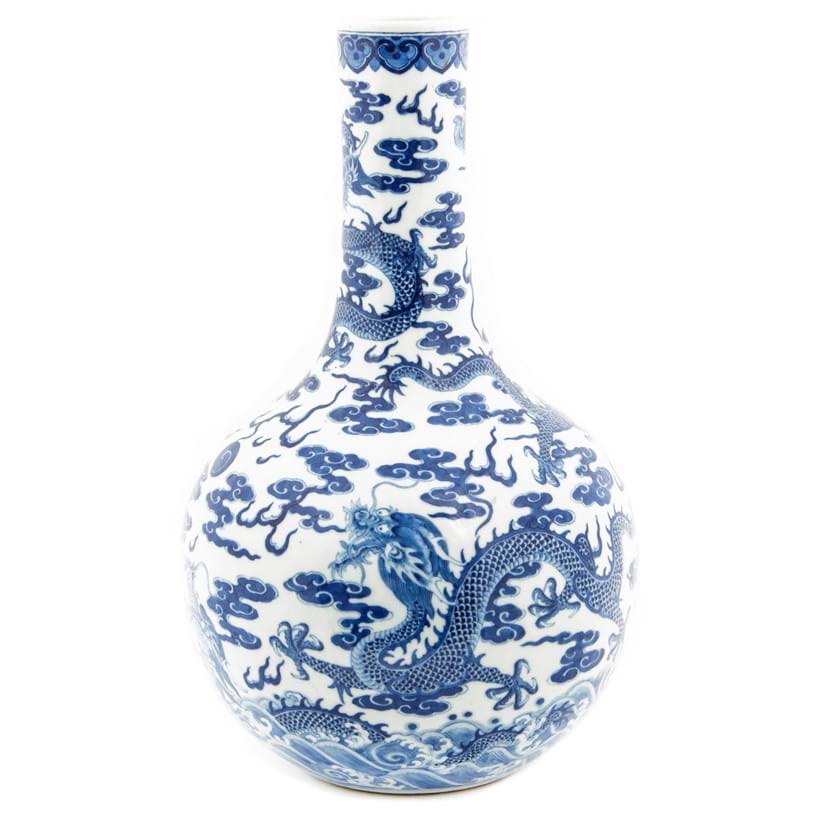 Dragons therefore were the emblem of divine imperial power and used in conjunction with elements of imperial life, such as the emperor’s thrones, cutlery and other household objects (Figure 2 & 3). Before his accession, the emperor had been a ‘dragon hidden in the depths’ and after his death, he ‘became a dragon again’. 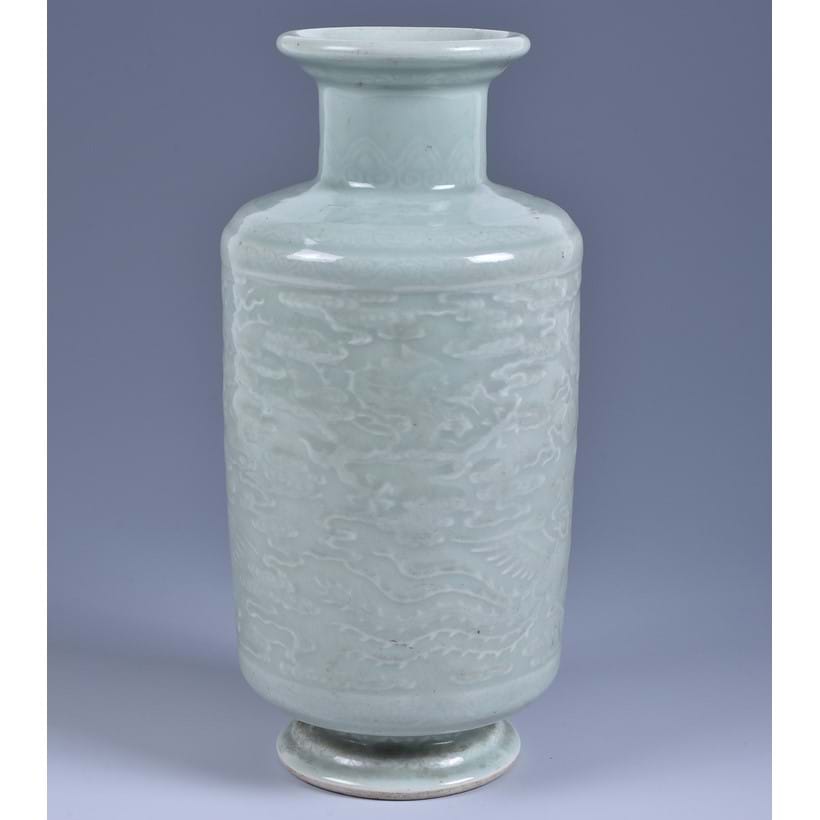 As the principal motif emblazoned on almost all Qing court robes, the dragon was the personal emblem of the Imperial family. The right to wear the dragon robe and its accessories was conferred by rank and entitlement. In this example as shown in Figure 4, eight five-clawed dragons (four full faced and four side facing) are embroidered with gold thread surrounded by five coloured clouds and bats holding auspicious symbols, bestowing ‘ten thousand fold’ of good fortune upon the wearer. This robe would have been worn by an Imperial Consort or a Princess, wife to a first or second rank Prince. The side facing dragons clasp the pearl of wisdom indicating imperial power. A band of running dragons is inset half way along the sleeve and the horseshoe shaped cuff and neck edgings are embroidered with writhing dragons, lively bats and clouds on a deep blue silk ground. 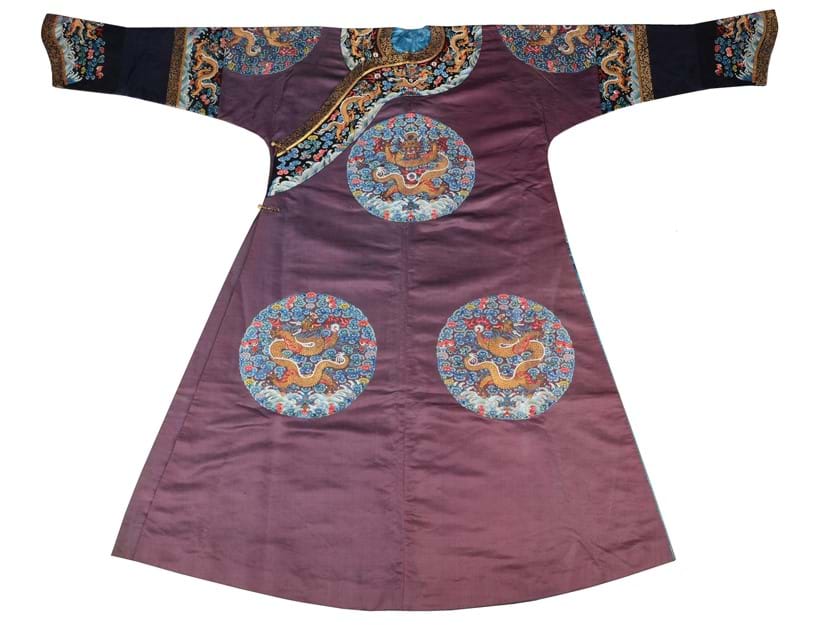 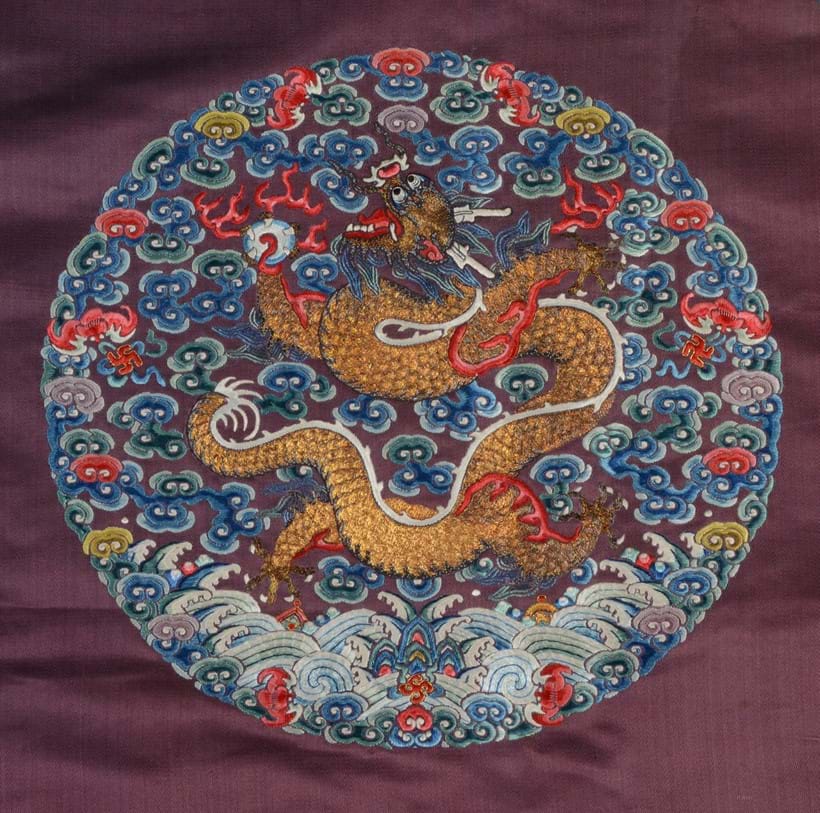 Dragons were not always depicted in a realistic way. Figure 5 shows a Qing-dynasty bronze censer with C-shaped handles modelled to imitate stylised dragons. Censers of this type are called ‘you-dragon censers’ [蚴龙耳炉]. According to Xuande Yiqi Pu, a 15th-century volume by Lv Zheng, this design was the favourite of Xuande Emperor (1399-1435) as ‘its elegance excelled all other Xuande censers’ and was hence displayed in the Imperial study room. Although very few 15th-century censers of Xuande reign period actually survived, you-dragon censers were specially favoured. In extraordinary size and weight, this censer would have been a display of a Qing imperial family member in his study room. ‘窄边蚰耳藏经色，黄云隐跃穷雕磨’, a 17th-century Chinese scholar Mao Xiang (1611-1693) praised that underneath its slim rim and dragon-shaped handles of a you-dragon censer hides ‘golden clouds’. 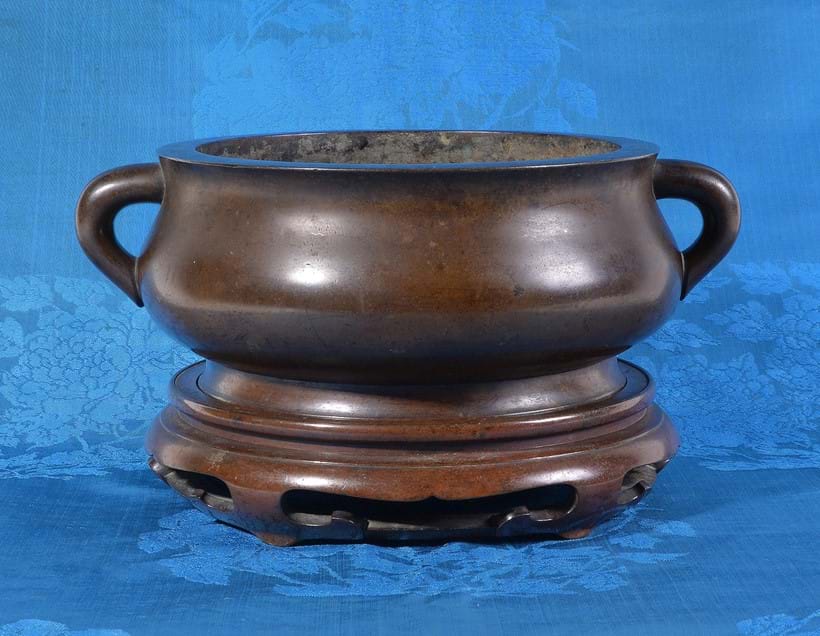