Day One of our Interiors auction on 20 April features over 50 lots of Studio Pottery and designer ceramics. Amongst these lots are works by renowned potters including Lucie Rie, Edward Hughes, William Plumptre, Charles Vyse, Bernard and David Leach, and an apprentice at the Leach Pottery, St. Ives, Richard Batterham.

In 1938, Lucie Rie fled Nazi Austria (Vienna) and emigrated to England, where she settled in London. Around this time she separated from Hans Rie, a businessman whom she had married in Vienna in 1926, and their marriage was dissolved in 1940. During and after the war, to make ends meet, she made ceramic buttons and jewellery, some of which are displayed at London's Victoria and Albert Museum and as part of the Lisa Sainsbury Collection at the Sainsbury Centre for Visual Arts, University of East Anglia, Norwich. It is from this period that this bowl would appear to date.

Rie’s works are usually noted for their modernist forms and her use of bright colours, here the tones are more muted with a crackled creamy white glazed interior and an unglazed exterior. The pot has her signature LR seal mark.

Lucie Rie's small studio was at 18 Albion Mews, a narrow street of converted stables near Hyde Park. She invited many people to her studio and was renowned for giving her visitors tea and cake. The studio remained almost unchanged during the 50 years she occupied it and has been reconstructed in the Victoria and Albert Museum's ceramics gallery.

Rie was a friend of Bernard Leach. They are considered amongst the greatest studio potters of the 20th century alongside Hans Coper.

Bernard Leach (1887-1979) is one of the best remembered studio potters and is widely acknowledged to be the ‘father of British studio pottery’. He came from a fine art background previously having trained at the Slade School and London School of Art being taught etching under Frank Brangwyn.

He travelled to Japan in 1908 and his son (David) was born in 1911.  He was invited to a Raku party where he become enthralled by the firing process. He continued to live and work in Japan during this period before returning to England in 1920.

Following this return and with the assistance of Japanese potter Shoji Hamada, whom he had met on his travels, he established a pottery workshop in St Ives, where many apprentices over the next sixty years learnt their craft.

One such student of Bernard Leach was his son, David, who eventually took over the management of the St. Ives pottery.  One notable improvement under his stewardship was the change from a woodburning kiln to one that was oil powered. In 1955 he left St. Ives for Bovey Tracey’s Lowerdown Pottery. Here he was able to produce a white porcelain body suitable for his studio pottery and he used thin, translucent glazes.  This combined to make the contrast with his and his father’s work greater. He was awarded an OBE in 1987.

Another student of Bernard Leach, this time in 1957, was Richard Batterham who died last year at the age of 85, his obituary appearing in the Guardian where they noted ‘Batterham would be recognised as one of the great artists of modern times’. Refusing his work to be pigeonholed, he is regarded as an ‘oriental potter’ albeit his work having none of the associated brushwork featuring instead simple, incised decoration accentuating the form of his work.  He worked on a Japanese style ‘kick-wheel’ modelled on the one Atsuya Hamada introduced at St Ives.

Dreweatts is pleased to offer two lots of Batterham’s work in this sale lots 176 and 176A. Each of these bowls are of deep form and have internal green glaze and characteristic ‘cut’ decoration to the insides.

There is little doubt as to the Japanese influence in British studio pottery however one potter who’s works are represented in this collection who was more highly renowned in Japan than in England was Edward Hughes. Due to the predominant Japanese interest in his work Hughes had little need to sell his work in Britain and was therefore known as ‘Britain’s best kept secret’.

Having graduated from Bath, he joined Kyoto City Art college from 1977-79 and later held his first solo exhibition in Osaka in 1979. He seems to have exhibited annually in various cities in Japan until his return to Britain in 1984. Upon his return he established his pottery in Cumbria mostly making reduction fired stoneware and porcelain. His pottery stamp mark includes his initials EH as well as the Japanese characters Earth & Fire.

He is best remembered for his shapes and his glazes which he often named from their origins. He retained his links with Japan periodically sending pots to be exhibited at various sites around Japan.

Dreweatts have 5 lots of his work in this sale. Lot 202 appears to show his work best with both a focus on an attractive form and subtle green through purple glazes. 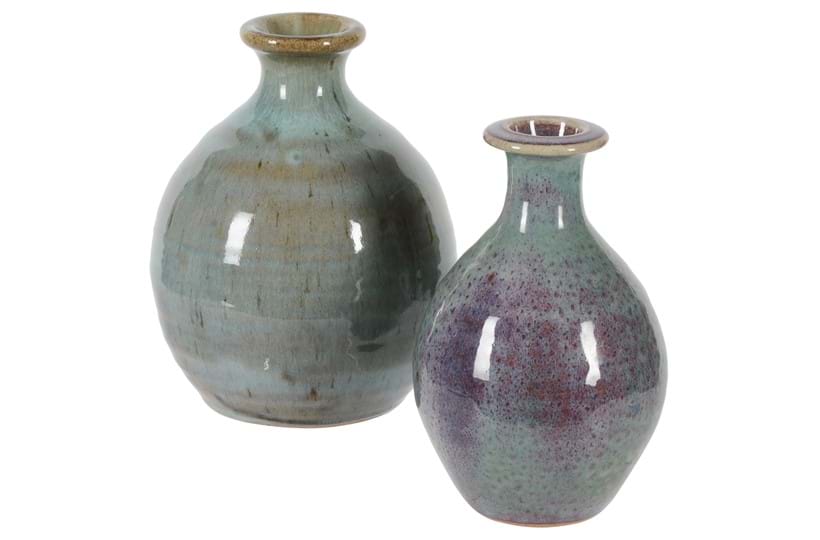 Dreweatts also have five lots from William Plumptre who also encompasses this fusion if Eastern and Western culture. He studied ceramic design at Chelsea College of Art in 1985. From here he travelled to Japan, where he continued his training in the workshops of three different potters, including master Tatsuzo Shimaoka.

In 1987 he set up his first pottery in Hartsop near Patterdale, building his own oil-fired kiln in the outbuildings of a traditional Lakeland house. In 1994 he moved to farmhouse near Witherslack where he established a new studio where he is still creating his pottery today.

Plumptre’s work is recognisable.  He throws with robust stoneware clay and making a variety of press moulded bottles and dishes, utilising rope and other materials to decorate the surfaces, each piece is then inlaid with different coloured slips. His glazes are made largely of local materials including wood ash and granite.

Here we have lot 199 featuring this signature impressed technique to the facets of their bodies. 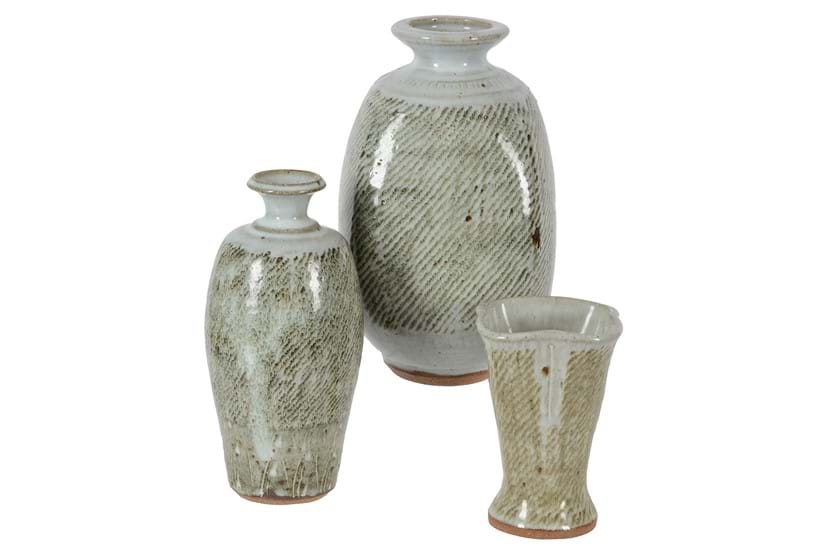 Another early pioneer in the development of British studio pottery is Charles Vyse. He is best remembered for his more prosaic work at Royal Doulton where he was apprenticed from the age of fourteen as a modeller and designer. He was trained by Charles Noke and won a scholarship to the Royal College of Art.

Later, Vyse developed an interest in Chinese Sung pottery, and with the assistance of the collection owned by George Eumorfopoulos, his neighbour, he started to make his own sung style pots. Nell Vyse was an expert in the chemistry of ceramics and she provided the technical knowledge for Charles to reproduce these chun, celadon, tenmoku and t'zu chou glazes for himself.

The studio in Cheyne Walk was damaged badly in the blitz and following the twin blow of this and the end of his relationship with Nell, Vyse took up a teaching position at Farnham School of Art.