On 28 November we will be offering the second part of Natalia Josca's jewellery collection. Amassed during her travels in the 1960s, 70s and 80s, the collection comprises 130 lots, with pieces including Egyptian glass faience and beads, Berber, Bedouin and Russian silver jewellery and objects; her library of reference books, and the unused gemstones from her studio workshop. Some of the jewellery pieces on offer are Natalia's early attempts to create her own jewels from the various beads, faience, silver and other curiosities she had collected. 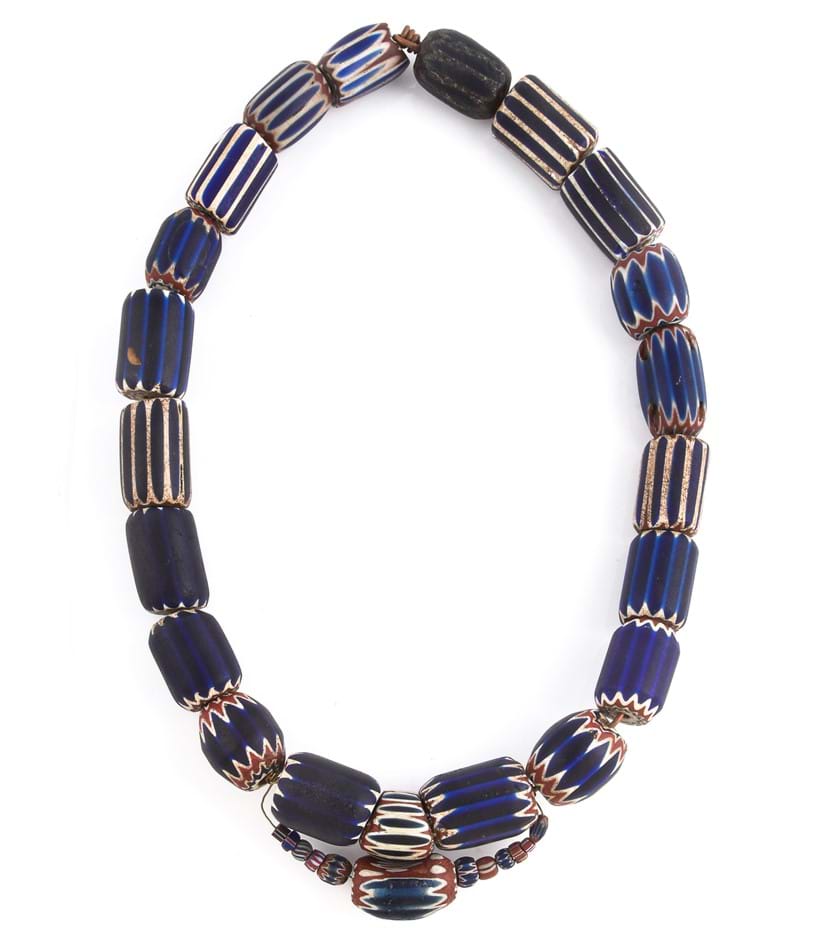 A large part of the sale includes a fascinating collection of silver jewellery, purchased by Natalia whilst living in Egypt. Natalia not only sourced Egyptian glass beads and faience from the souks and bazaars of Cairo, but being able to speak Arabic (as well as her native Italian, and English, French and Russian), Natalia would take herself off into the desert and buy silver jewellery from the travelling Bedouin traders. The jewellery in the collection comes from a very wide geographical area of North Africa to the Arabian Peninsular, from Morocco to Yemen. 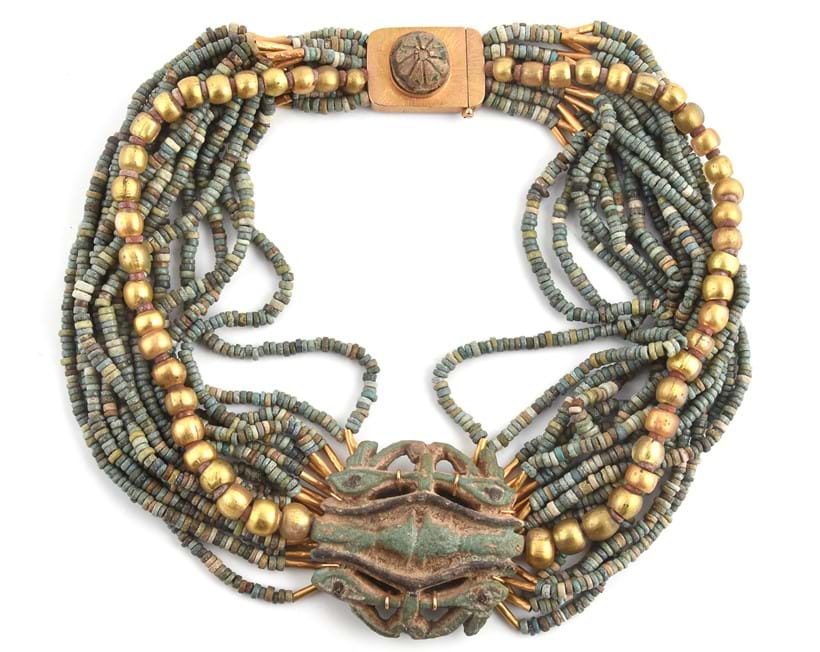 An Egyptian Revival blue faience bead collar necklace, composed of sixteen rows of spacer beads and a gold coloured glass bead row, supporting a blue faience amulent with the Eyes of Horus, on a plaque clasp applied with a carved motif, 40cm long

The Berber pieces in Natalia's collection are set with coral, red cabochon glass, and includes large strands of highly prized Chucky coral beads, as well as silver necklaces, fibulae and bracelets. The jewels are often set with amber, coral, agate, cornelian, pearls or turquoise and sometimes enamel. Most pieces are large and dramatic, with the bracelets and anklets being chunky and heavy. The necklaces and pendants characteristically feature silver bells, balls, coloured beads, coins and links of intricate chainmail mesh. 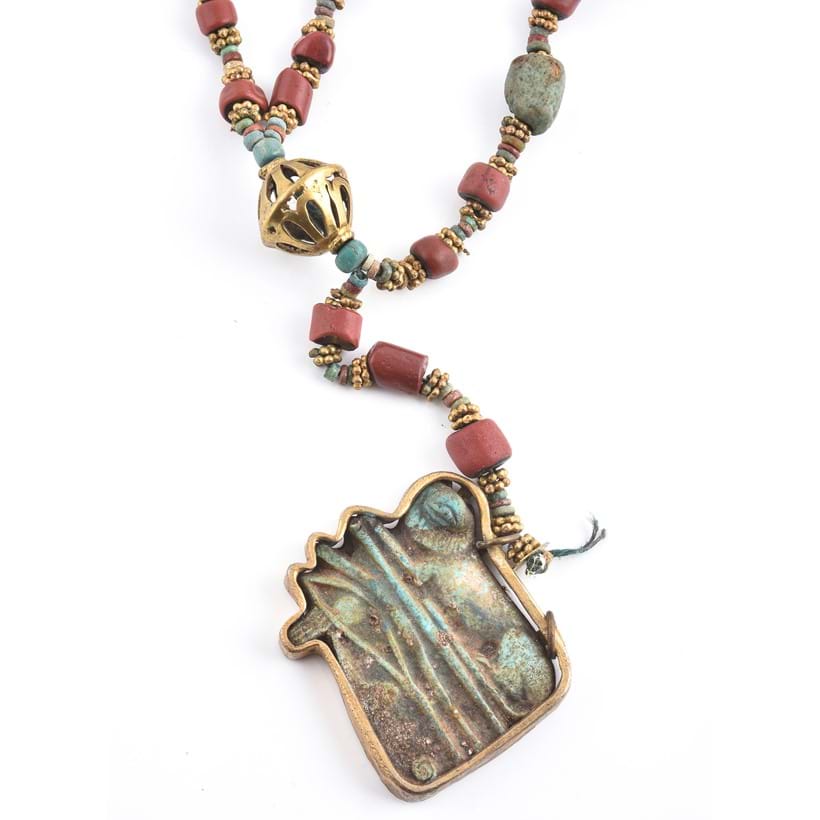 The Bedouin pieces came to Egypt through the traditional trade routes of the nomadic Bedouin traders, who used silver jewellery as means of exchange. Thus there are Yemeni pieces made from re-strikes of Maria Theresa Thaler coins. Thaler coins were Austrian coins that were widely used in the Levant trade. The coins were always of 83.3% silver, and so the jewellery was usually made of a fairly standard percentage of silver. Yemeni jewellers would melt these coins to create jewellery pieces. 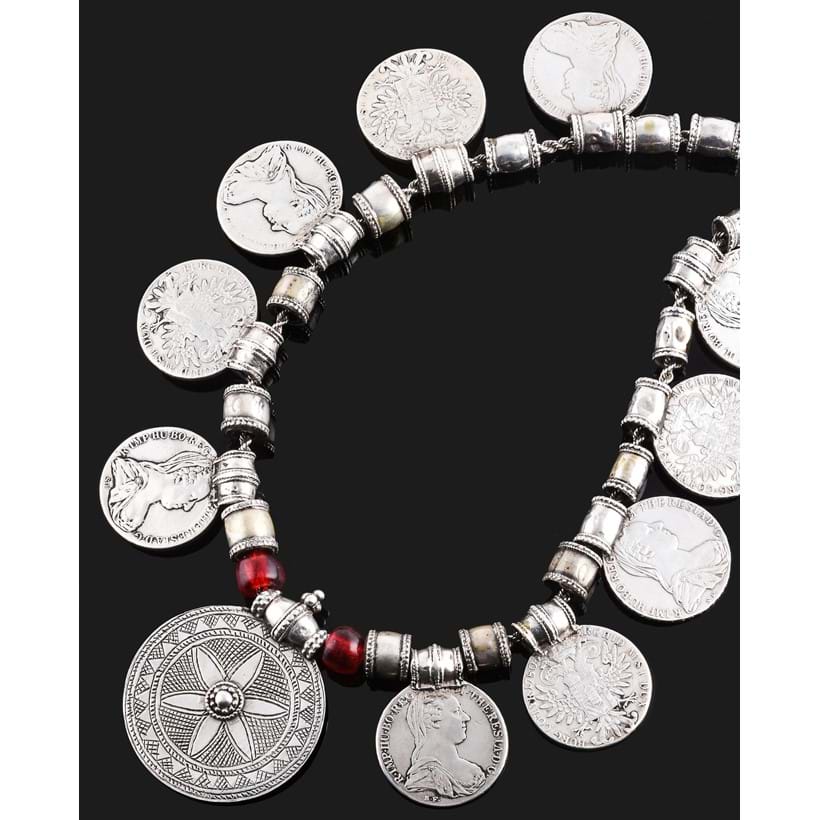 Bedouin women received their jewellery as a wedding dowry, which became their private property, and was insurance in times of need. From the early 1960s Bedouin women began to trade in their silver jewellery for gold pieces, as the silver jewellery lost favour and fashion changed amongst the Bedouin. Bedouin jewellery is rarely old or antique, as most of it would be melted down or sold after a woman's death.

These striking pieces have caught the imagination of western fashion designers since Yves Saint Laurent started collecting this type of jewellery in the 1960s. His world renowned collection is now in Musee Berbère in Marrakesh. Over recent years, Berber, Bedouin and North African silver jewellery has been used in a number of fashion house collections, including collections by Yves Saint Laurent, as well as several other fashion and jewellery designers. There are a number of important collections in many museums worldwide, including the Collection of Berber Jewellery at The Met in New York. It has even been in the news recently as the Kardashian sisters were seen wearing wonderful traditional Armenian silver jewellery on their recent visit to Armenia.

AUCTION DETAILS
Thursday 28 November | 10.30am
This is an online auction with an auctioneer. Online bidding is available via dreweatts.com and the-saleroom.com. For more bidding information, please click here.