On Monday 3 October, we were privileged to be able to offer the contents formerly from Flaxley Abbey in Gloucestershire. The interiors of Flaxley Abbey were designed by theatre and set designer Oliver Messel, one of the most iconic figures of twentieth century design and represented one of his most important and complete commissions, being the only country house ever to be designed by him.

The sale saw strong bidding from across the globe. Private, trade and collector clients competed online, on the phones and in the room, all trying to capture a piece of design history. The auction was a white glove event with all lots selling and totalling £877,850 (nearly three times the pre-sale estimate). 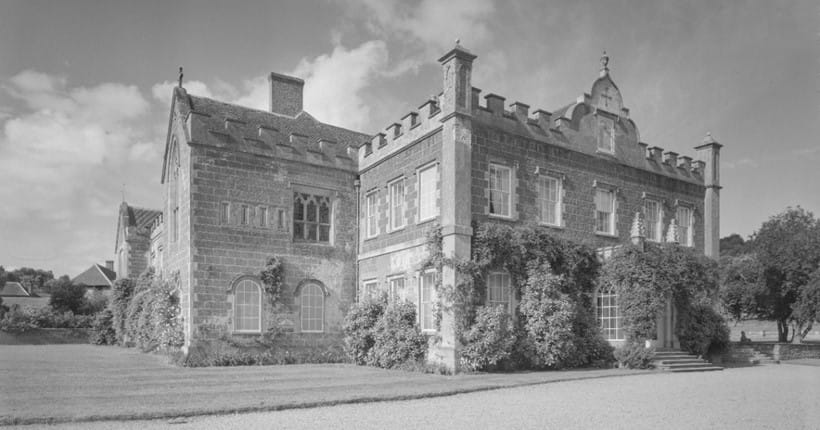 The collection comprised  host of works either designed by Oliver Messel or supplied by him, with a substantial number of items from his ancestral homes, Nymans, Holmstead Manor, Lancaster Gate and his London home on Pelham Place.

The top selling item from the auction was Lot 76, an Anglo-Dutch School (circa 1740) oil on canvas. This work was in the collection of Colonel Leonard and Maud Messel in the drawing room at Holmstead Manor. It is likely that, like so much of the Messel collection, it was originally at Nymans and removed to Holmstead after the disastrous fire in 1947. After the death of his mother in 1960, Oliver Messel inherited the picture but later sold it between 1962 and 1966 to Frederick Baden-Watkins for the dining room at Flaxley Abbey. On Monday it sold for an impressive £37,500, against a pre-sale estimate of £7,000-10,000 (+ fees). 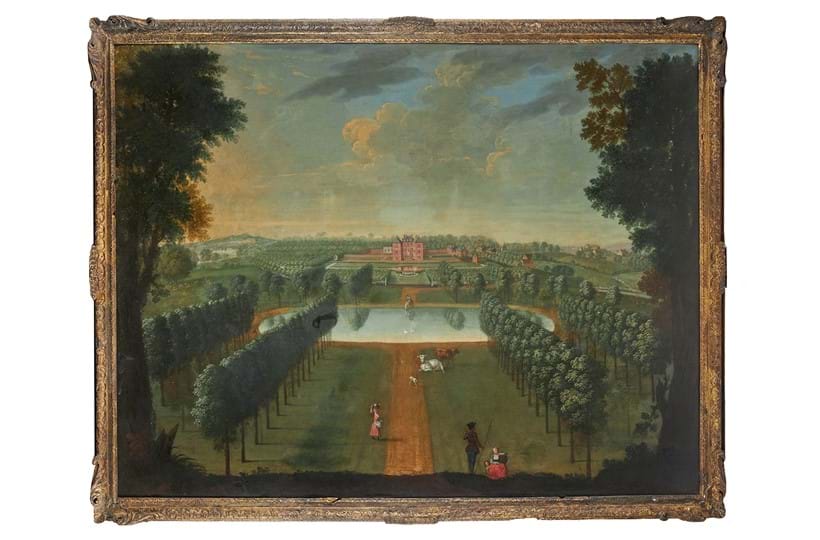 Lot 290 was a George II lead figural garden sundial, attributed to John Cheere after John Nost and sold for £36,250.

It was possibly originally acquired by Thomas Crawley-Boevey, 1st Bt. of Flaxley (1709-69), at the time of his marriage to Susanna (née Lloyd) in May 1743, and by descent at Flaxley Abbey, Gloucestershire. This 18th century lead sundial was described as 'The Flaxley Sundial' when it was sold from the Flaxley Abbey estate in 1960, when the house, estate and contents were sold via a five-day auction by Bruton, Knowles & Co. At this time, the sundial was bought by Frederick and Phyllis Baden Watkins and returned to the Flaxley Abbey estate.

The sundial is designed with the figure of Father Time depicted as a bearded old man kneeling under the weight of a bronze dial that bears the Boevey coat of arms. He is shown with wings to represent how 'time flies'. 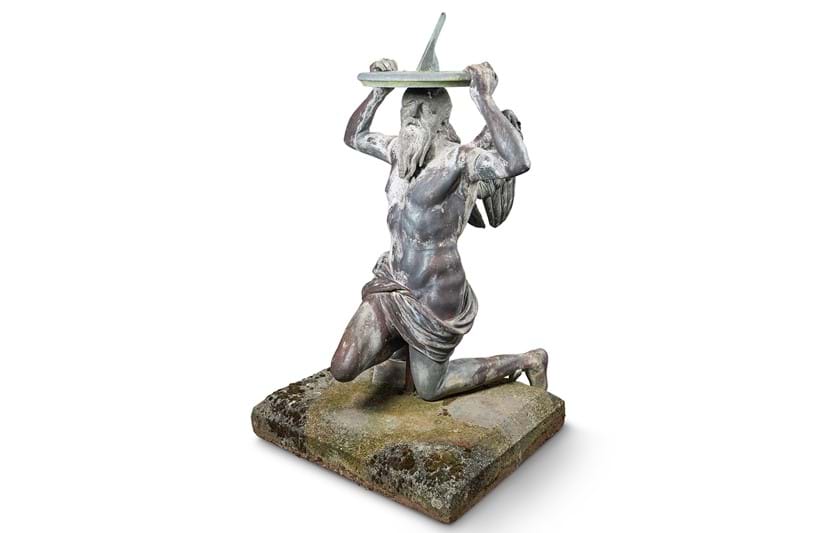 Also from the Crawley Boevey collection, original to Flaxley Abbey, was Lot 41, a late 18th/early 19th century carved giltwood mirror, made in the manner of Thomas Chippendale, which sold for £32,500.

Under Oliver Messel, the interiors at Flaxley Abbey were restored to their former period style. It seems likely that he incorporated this historic mirror from the original Crawley-Boevey family collection into his scheme for the Morning Room after it had been bought by Frederick Baden Watkins in the 1960s. 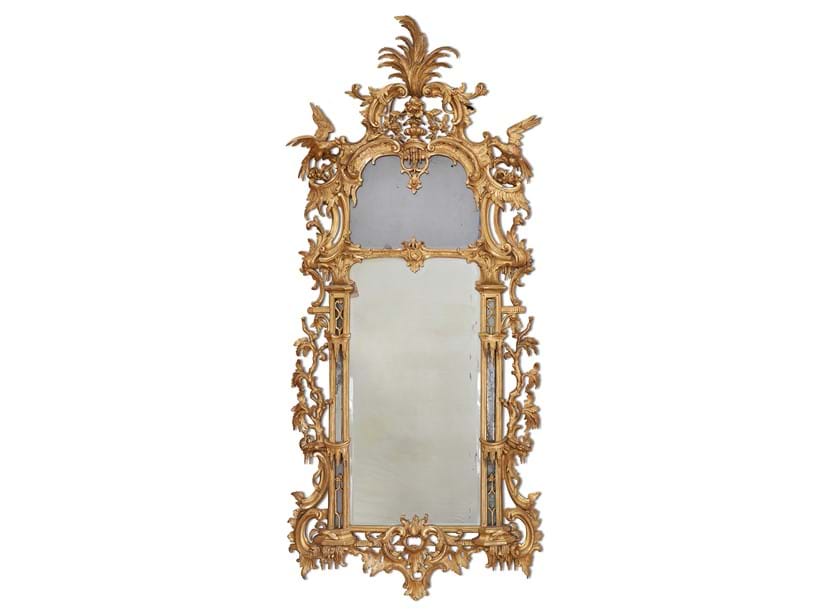 Designed by Oliver Messel and made by Victor Afia, was Lot 70, a set of eighteen cream and green painted dining chairs. 'The Dining Room Chairs' of the same design were used in the scheme for the formal living room at Maddox, Messel's Barbadian home. The present lot had a pre-sale estimate of £3,000-5,000, but went on to realise £30,000. 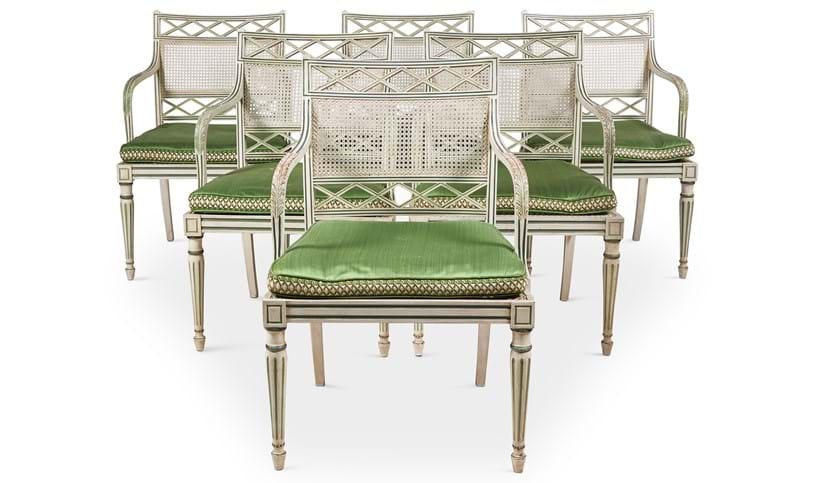 Lot 70: A set of eighteen cream and green painted dining chairs, designed by Oliver Messel, made by Victor Afia | Sold for £30,000

Finally, selling for £25,000, we wanted to take a look at Lot 165, an early 18th century Brussels biblical tapestry by Frans Van Der Borght, depicting the discovery of Moses. It is signed to lower margin F V D Borght. This particular design is known to have been woven by various members of the Borght weaving dynasty but signed examples are rare.

Whilst the figural designs are traditionally attributed to the Flemish artist Jan Van Orley, it would seem likely that the landscape setting may have been the work of Augustin Coppens. In this collaboration they were echoing the work of Nicholas Poussin and Charles Le Brun at the royal tapestry works at Gobelins from the 1680s.

It was formerly part of the Messel family collection at Nymans, before being removed to the drawing room at Holmstead Manor in 1947 after the disastrous fire and thence by descent to Oliver Messel. It was then supplied by Oliver Messel to Frederick and Phyllis Baden Watkins for Flaxley Abbey. 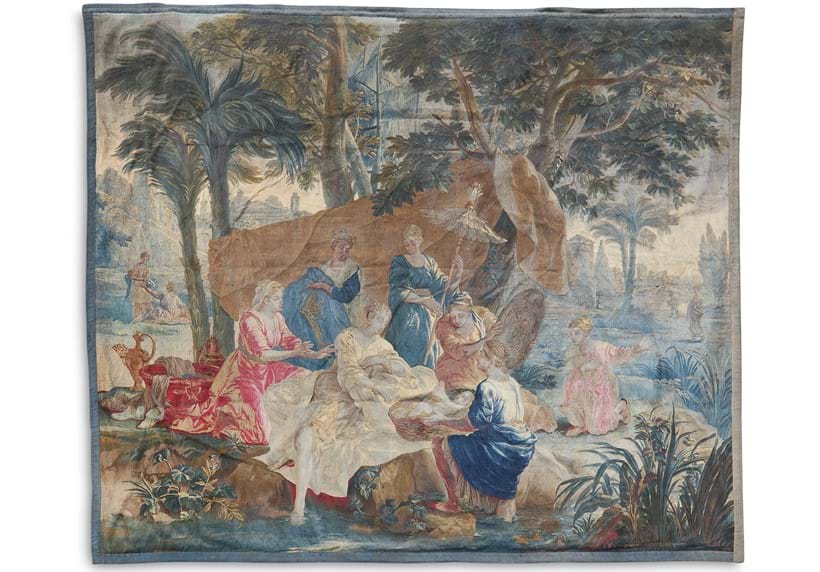 We have an exciting sales calendar of House Sales and Private Collections planned for 2023 as well as all our other categories. If you would like more information, whether it be our jewellery, modern art, collection sales or anything else we would love to hear from you: