On Tuesday 4 October, Dreweatts hosted the auction of 'Chilham Castle: The Selected Contents from a Christopher Gibbs Interior' which included a superb selection of period furniture, objects and works of art with exceptional provenance. Home to Stuart and Tessa Wheeler, the interiors at Chilham Castle were designed by interior designer Christopher Gibbs, with the help of Jane Ormsby-Gore and Peter Hinwood. The contents were a cross section of Gibbs's vision, with each item representing the collaboration between history and an iconic taste who inspired a whole generation of interior decorators.

The sale was very well viewed and sale day was just as busy, with bidding across four internet bidding platforms, on the phone and in the room. The auction totalled £581,375 (75% above pre-sale estimates), with 95% lots selling and 66% of lots selling above top estimate. Here we take a look at some of the highlights. 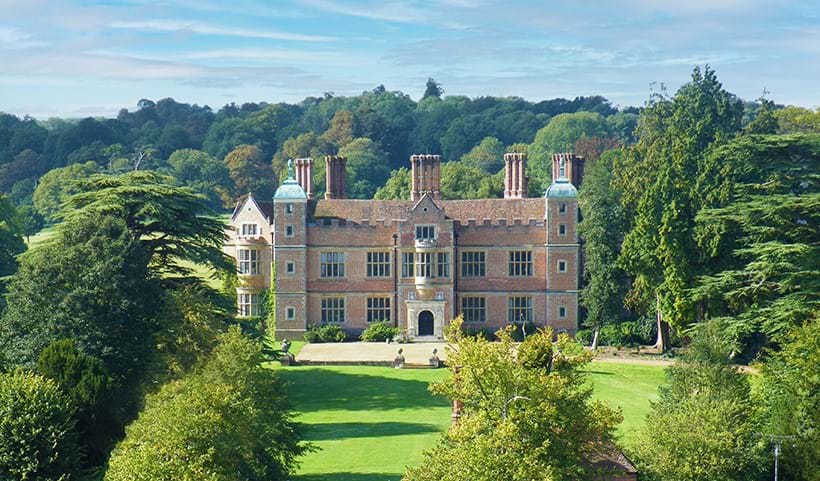 Some of the items from the collection were sourced from a few of this century's great House Sales, including Easton Neston, Godmersham Park, Chirk Castle, and the Royal House of Hanover.

A highlight was Lot 413, a matched pair of Charles II kingwood oyster veneered wall mirrors, dating to circa 1685 and designed in the manner of Thomas Pistor. With fantastic provenance, formerly from Chirk Castle, they sold for £47,500. 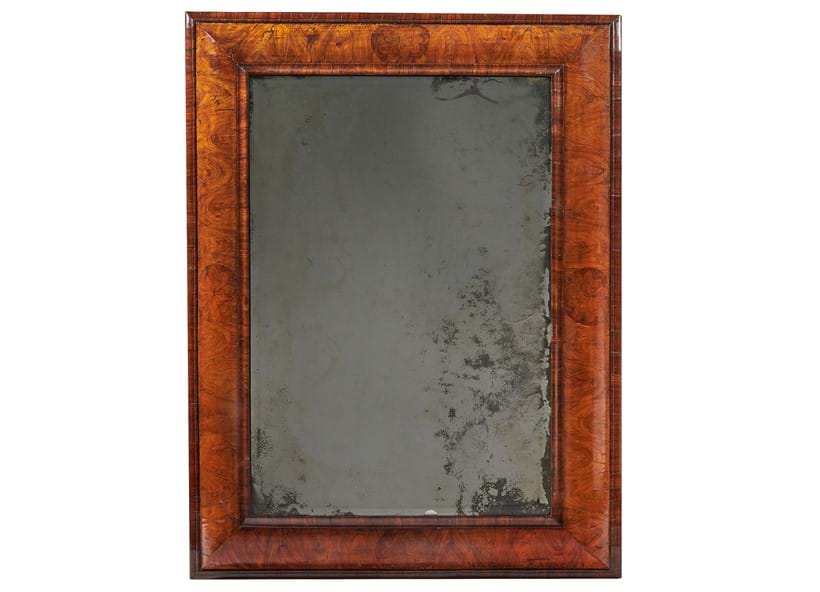 The Charles II pier-glasses, with bevelled Vauxhall plate, have bolection-moulded Kingwood frames with superb parquetry in a wave scrolled figuring and central mosaic parquetry medallion of shell scalloped ‘oyster’ veneer. The mirrors, of exceptional scale for their date, were almost certainly commissioned for the Long Gallery at Chirk Castle.

This portrait is an earlier version of the work painted for the collection at 10 Downing Street. It was bought by Stuart Wheeler at a Conservative Party fundraising evening in May 2004. It was sold in our auction with a photograph of Stuart Wheeler and Margaret Thatcher in front of the portrait. 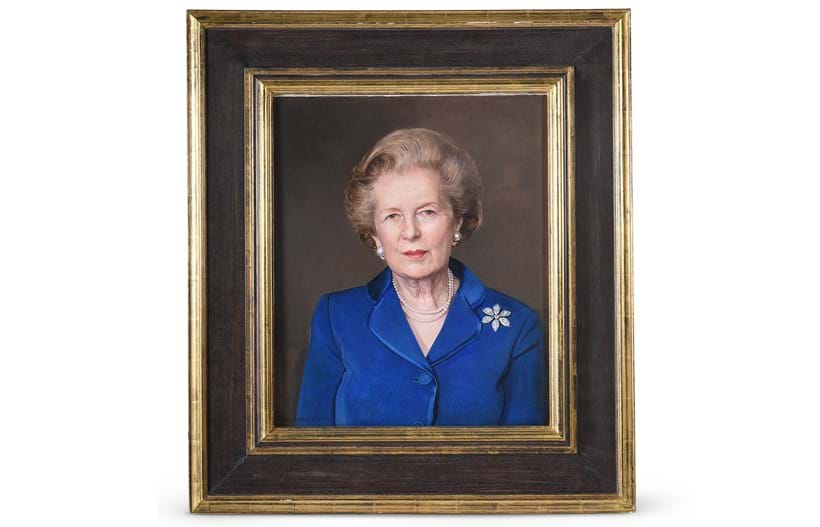 Formerly from Leeds Castle, we had Lot 365, a late 17th century Continental walnut centre table, probably Italian, which sold for £40,000. Delicately carved, the supports are designed with foliate scrolls, and finished with bearded masks. 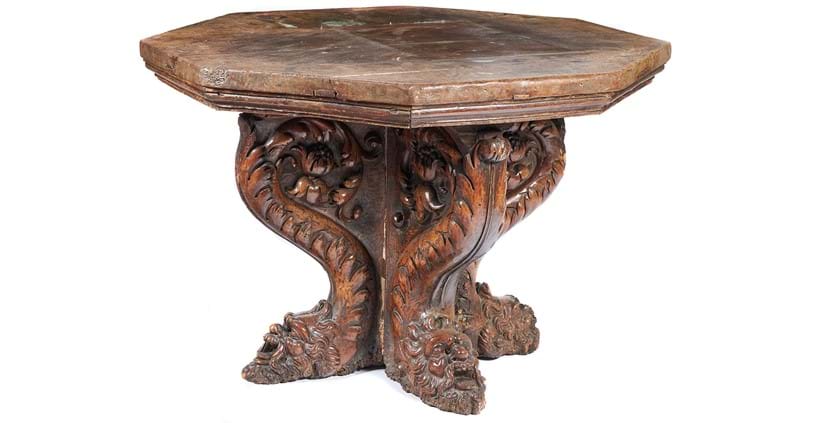 The auction featured a wonderful selection of textiles including Lot 317, a Brussels biblical tapestry dating from early/mid 16th century. Depicting Rebecca and Eliezer at the well, this piece sold for £30,000.

Also supplied by Christopher Gibbs, the tapestry is woven in metal thread, wools and silks. It depicts the story of Abraham's servant Eliezer meeting Rebecca by the well. They are surrounded with maidens carrying water urns, with Eliezer's camels to the right with a penitent kneeling man. The borders are decorated with fruit and flower clasps and meandering vines, interspersed by various birds, including a falcon, peacock, owls and a monkey and a dog. 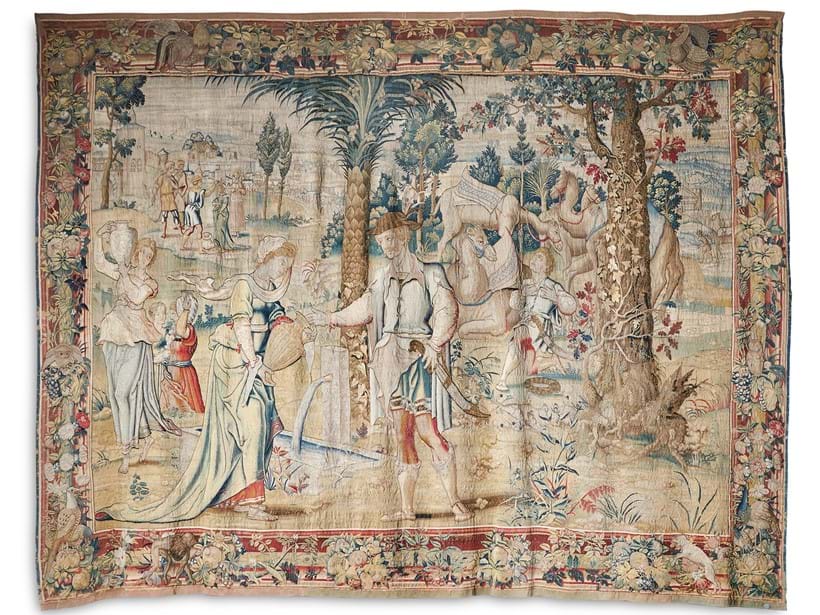 A tapestry depicting 'The departure of Jacob for the land of Canaan' and almost certainly from the same series and probably from the same set, was in the collection of Chevalier Alphonse de Stuers, the Netherlands Ambassador to France, and sold at Mensing & Fils, Amsterdam, 12 April 1932, lot 304, and again anonymously Sotheby’s London, 10 April 1981, lot 105 (now at the Castle Museum, Gaasbeek).

That tapestry has borders of the same design as this lot and compares with a hanging depicting “The Last Supper” in the Metropolitan Museum of Art, New York (Accession Number: 44.63.4). The Met example has the same slightly unusual but distinctive use of owls to the side panels and is attributed to a design possibly after Michiel Coxie the Elder. It carries an unidentified weaver’s mark but the online illustration for this example is in black and white and has no detail of the signature.

We have an exciting sales calendar of House Sales and Private Collections planned for 2023 as well as all our other categories. If you would like more information, whether it be our jewellery, modern art, collection sales or anything else we would love to hear from you: