Dreweatts is delighted to announce that it’s forthcoming Old Master, British and European Picture sale is now available to view online. The auction includes a comprehensive range of fine art from the 16th to early 20th century.

Early examples include Lot 6, a striking 16th century Italian oil on panel depicting St Jerome, and Lot 32 an impressive oil on canvas, titled Head of a Wolf by Jan Fyt. 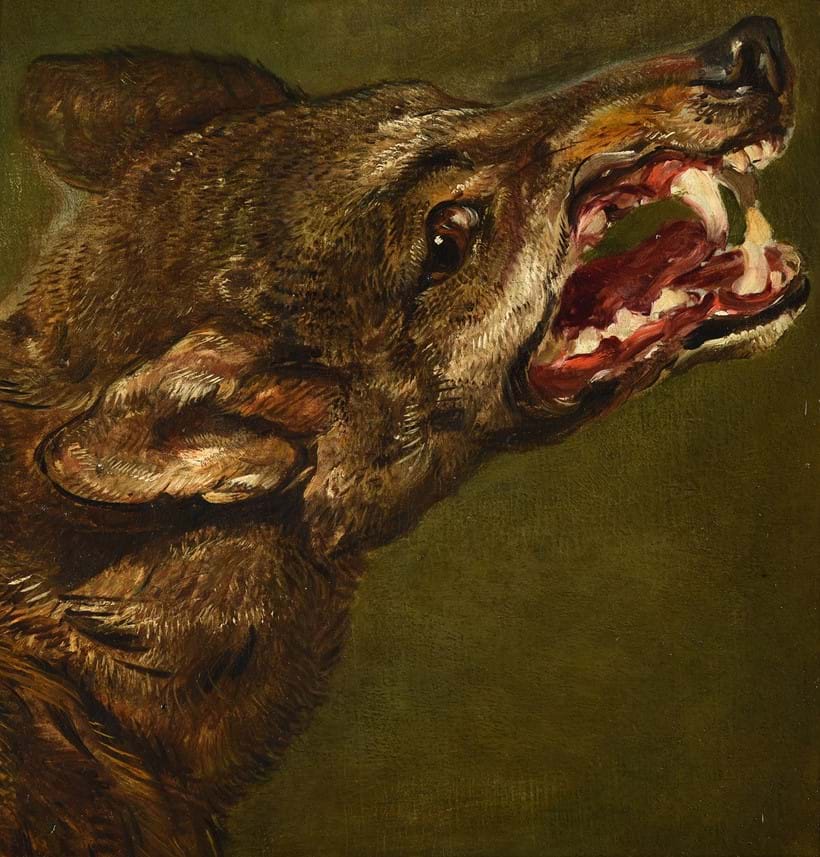 This picture relates to two studies of wolves by Fyt in the National Galleries of Scotland (NGS 529 and 530) which were both purchased for 14 Guineas in 1866, at the sale of a certain Mr Farrar. The sculptor William Brodie RSA (1815-1881) and the painter William Borthwick Johnstone RSA (1804-1868), both members of the RSA Council (the latter being its treasurer) recommended the paintings as 'very desirable addition[s] to the collections'.

Landscape with Figures by David Teniers the Younger is also a highlight (Lot 33). David Teniers the younger, was born in Antwerp in 1610. He received his artistic training from his father and went on to become one of the most prolific genre painters during the Baroque period. The artist was greatly influenced by the work of Adriaen Brouwer and Jan Brueghel, whose daughter he went on to marry in 1637. He became notable for detailed depictions of peasants and everyday life. Important patrons throughout his lifetime included the King of Spain and Prince William of Orange. 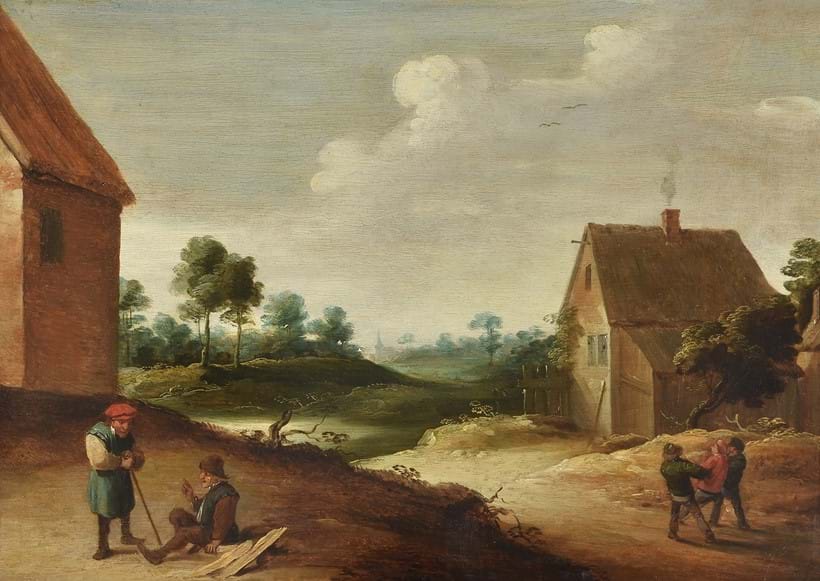 The present lot was purchased by the present owner from Leonard Koetser, the renowned Old Master dealers. The Koetser family founded the gallery in Amsterdam just before the First World War. In 1923, Henri Koetser moved his family and business to London. The company expanded, opening offices in New York and in 1967 an office in Zurich, where the business is now based. The present lot was exhibited in their 1974 Spring exhibition.

A number of period portraits are also included in December’s offering with a contemporary version of Van Dyck’s portrait of Charles I on horseback (Lot 58) deserving particular mention.  Watch the video of Brandon Lindberg, Dreweatts' Head of British and European Pictures, discussing this fascinating version of one of the most famous portraits of King Charles I here. 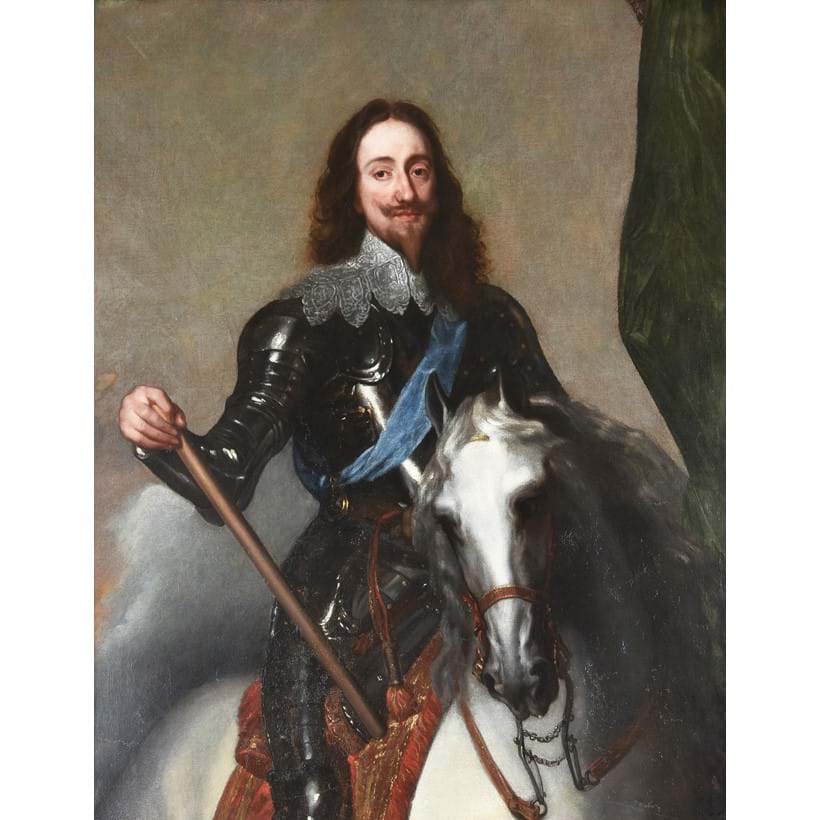 This depiction of King Charles I is one of the most celebrated and well-known images of him. He was a fine horseman and the symbolism of his pose perhaps suggests he was a ruler who can tame a powerful animal and control the passion and disorder in his kingdom (K. Sharpe, Politics and Ideas in Early Stuart England, London, 1989, pp.44-7). It relates to Sir Anthony van Dyck's Charles I on Horseback with M. de St Antoine in The Royal Collection which is dated 1633. It was painted on a monumental scale (142 x 102 in.) and hung at the end of the Gallery at St James's Palace, a position for which it was probably designed.

It has been suggested that our picture may have once been of a similar scale and reduced because the outer parts of the composition were unresolved. The scale of the figure of Charles corresponds directly to that in the autograph version and the idea of it being a fragment is further supported by it not being a standard size. A more typical 50 x 40 in. canvas would suggest that it is a later replica. The modelling of the horse and figure is well resolved whereas the plain background may be either an unfinished ground layer waiting to be painted or possibly a layer of blue (spelt) used in the seventeenth century that tended to deteriorate. The reason why the full-size picture was abandoned are not known, but it would have been a very substantial commission with a limited number of houses or institutions able to accommodate a picture on such a scale. The onset of the Civil War in 1642 may well have also been a contributing factor. None-the-less it is a fascinating insight into 17th Century Royal portraiture.

The picture was formerly in the collection of Richard Cosway, the leading portrait painter of the Regency period, who in 1785, was appointed Principal Painter to the Princes of Wales. 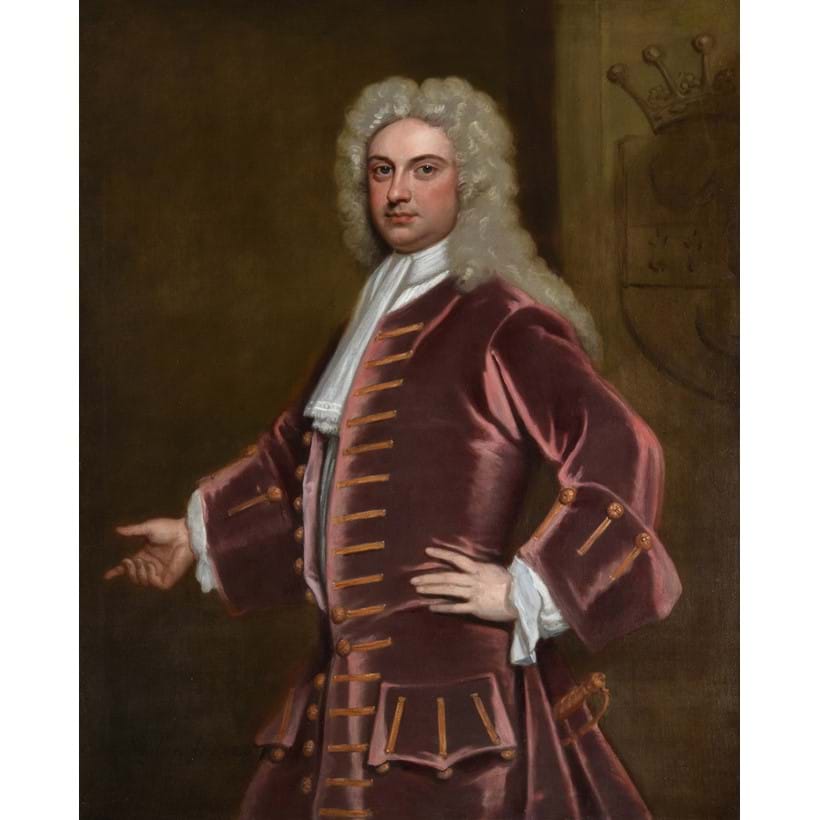 William Coventry, 5th Earl of Coventry was born in 1676, the son of Walter Coventry and his wife Anne Holcombe, daughter of Humphrey Holcombe, a wealthy London merchant. William inherited the Earldom in 1719, despite being only distantly related to the Earl's of Coventry; his grandfather being the youngest brother of Thomas Coventry, 1st Baron Coventry. It is perhaps for this reason we see the large Coventry coat of arms painted on the wall to the right, behind William.

Although the composition is a typical format of Kneller's later works, the inclusion of the family coat of arms surmounted by the Earl's coronet is most unusual. In addition, William's lavish maroon velvet jacket covered in an excess of gold brocade detail is significantly more decorative than many jackets worn by other nobleman in Kneller's portraits, and it is clear to see William wished to visually display his wealth and status.

William appears to have moved into Croome Court, the Coventry family seat built in 1649, as soon as he became the 5th Earl and immediately went about improving the earnings of the estate. William's son George would later go on to employ Lancelot 'Capability' Brown to redesign the gardens and house in a style that befit the mid-18th century fashions.

As well as inheriting the Earldom that year, 1719, was also the year that William was married to Elizabeth Allan, daughter of John Allen of Westminster, of whom Kneller also painted in a now lost pendent portrait shortly after the marriage.

This portrait was thus almost certainly painted to celebrate both William's rise to the peerage and his marriage.

We will also be offering Thomas Hudson's Portrait of Mary Browne (Lot 83). 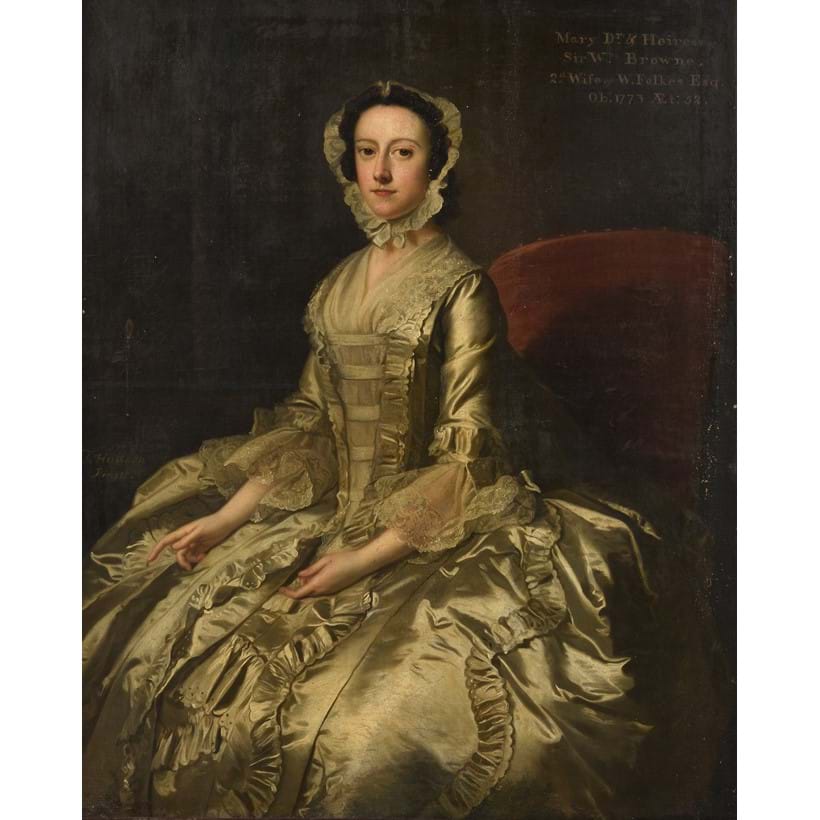 Thomas Hudson was one of the most fashionable portrait painters in London in the mid-18th Century. He taught Sir Joshua Reynolds and his sitters included the Duke of Cumberland and George Frederic Handel. In 1748 he visited France and the Low Countries with his friend William Hogarth. and his works of the 1750s, such as this, reflect his exposure to the sensuous handling of Flemish painting, as well as elements of the French rococo.

Mary Browne was the daughter of the wealthy physician Sir William Browne (1692-1774), and his wife Mary Greene. Browne began to practice medicine in the prosperous seaport and market town of King's Lynn, Norfolk, in 1716. He became a few of the Royal Society and was knighted in 1748. The following year he moved to London and settled in Queen's Square, Bloomsbury - not far from Hudson's fine house in Great Queen Street. In 1759 he commissioned this portrait, together with one of his wife. Both sitters wear silver satin dresses trimmed with delicate lace. Hudson also painted Sir William three times, firstly 1745-49, as a portly, prosperous Lynn physician, with St Nicholas's church in the background, again in 1766 in his pomp as the newly appointed President of the Royal College of Physicians and again on his retirement, which he gifted to the college.

Mary married William Ffolkes (d.1773) of Hillington Hall, Norfolk in 1747. The Ffolkes were an ancient Norfolk family dating back to before the 14th Century and had connections to the Walpole's of Houghton and later in the century, to Admiral, Lord Nelson. William Ffolkes was a lawyer and agent for the Dukes of Montagu, Richmond and Manchester. Their only son, Martin, was born on 21st May 1749. After Eton, he studied at Emmanuel College, Cambridge and entered Lincoln's Inn in 1768. On his grandfather Sir William Browne's death in 1774, he restyled himself as Browne Ffolkes and was created a Baronet. He was elected a Fellow of the Royal Society in 1772, was High Sheriff of Norfolk 1783-84 and was MP for King's Lynn from 1790 until his death in 1821.

Browne is memorialised with his daughter Mary and generations of the Ffolkes family in Hillington church. Those records, and Hudson's portraits, commemorate two remarkable and fascinating East Anglian families.

Also featured in the sale is a small collection of works by Benjamin Williams Leader, including two small coastal sketches from the artist’s studio (Lot 246) and a larger, completed work depicting Goring on Thames (Lot 248). Leaving the land for the shore, the auction features a number of works by Danish artists (Lots 256, 257, 264 and 265). Leading the marine section is an impressive maritime work depicting an English yacht racing to windward under a foresail by Studio of Willem van de Velde the Younger (Lot 255).

Traditionally identified in Robinson as possibly being the yacht Henrietta built in 1679, it has now been suggested that this is in fact His Majesty's Yacht Katherine built 1661. 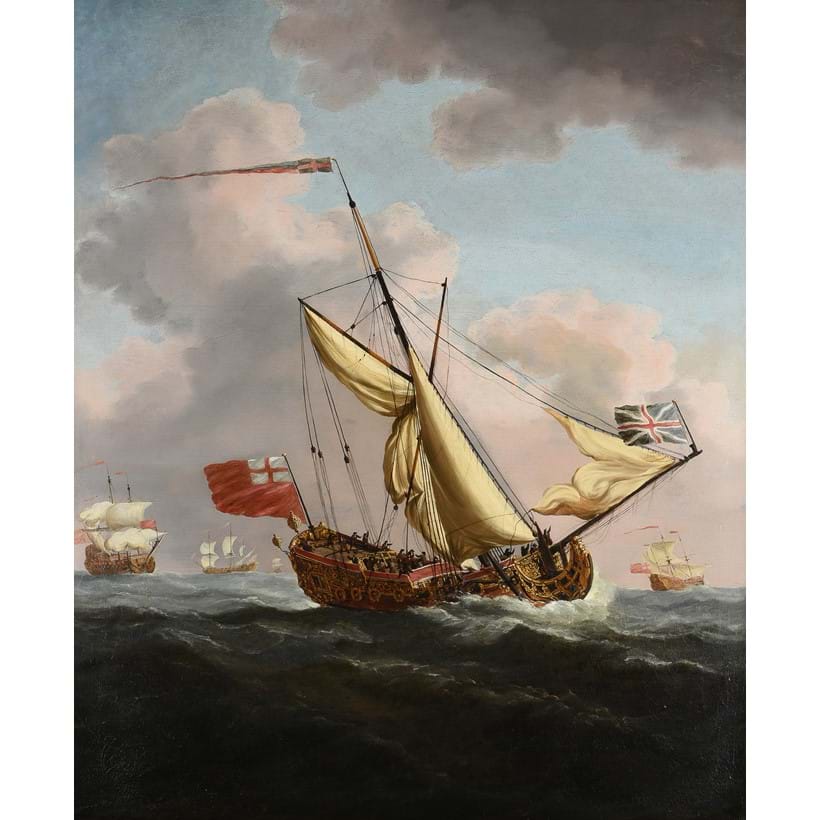 This is a Live auction.

Visitors are encouraged to wear a face covering while in the building, use the hand sanitiser provided on entering and observe social distancing rules. We may need to restrict the numbers of visitors viewing at one time, so if you would prefer to book an appointment in advance, please contact us.  To book an appointment to view, please email: pictures@dreweatts.com or call 44 (0) 1635 553 553.