Coming up we have our two-day Fine Furniture, Sculpture, Carpets, Ceramics and Works of Art auction on 30 & 31 March. Spanning the 17th to the early 20th century, the auction features rare antique items, representing the best examples of their type and period from throughout Britain, Europe and the rest of the world. Here we take a look at some of the highlights.

From a private London collection, we have a rare long set of impressive mahogany dining chairs, dating to circa 1830, made by Gillows. Each chair with front seat rail stamped 'GILLOWS.LANCASTER'. The set includes two armchairs. 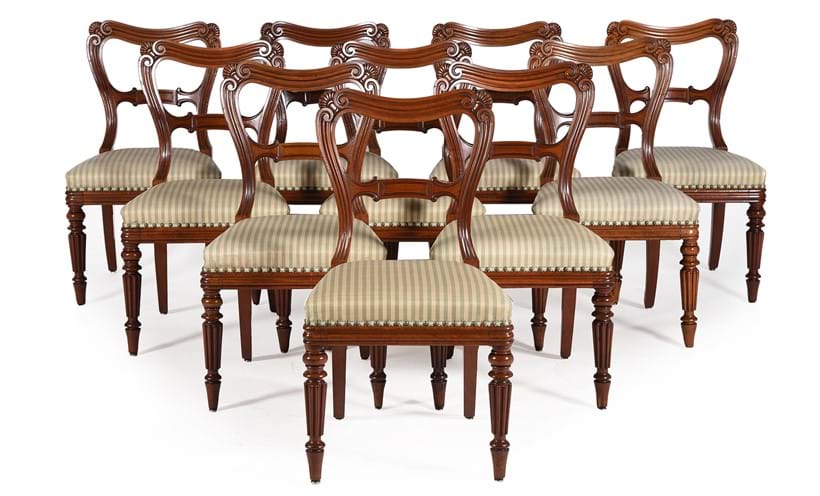 These chairs have added interest due to the fact that some of the chairs have pencil signatures to the undersides. This includes 'J. Dixon' which is possibly one of two John Dixons who are recorded as working for Gillows from 1807 and 1814 respectively. Another chair appears to be signed 'R. Law***' which could possibly relate to Robert Lawson who is recorded as working for the firm in the 1820s and 30s.

A William and Mary cabinet on stand

For those looking for early items, we have Lot 1, a lovely William and Mary walnut oyster, kingwood and rosewood veneered cabinet on stand, dating from circa 1690. This comes to auction from the estate of a titled gentleman in London. It is designed with the doors opening to an arrangement of drawers, some fitted with lift-out trays, around a central door. 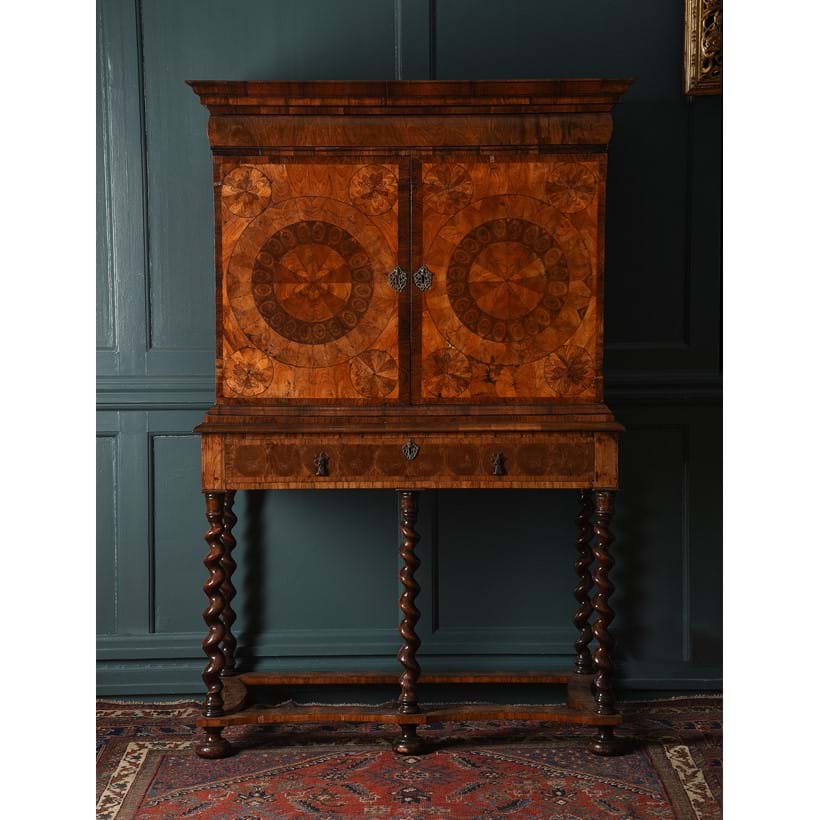 We then have an item with a rather unusual and interesting background dating from circa 1780. Lot 178 is a Japanese export Nagasaki lacquer serpentine commode.

Whilst it has a classic look, the technique of colourful shell inlay on a lacquer ground displayed by this commode, demonstrates that it was produced in Nagasaki, Japan, under Dutch instruction from the latter part of the 18th century. 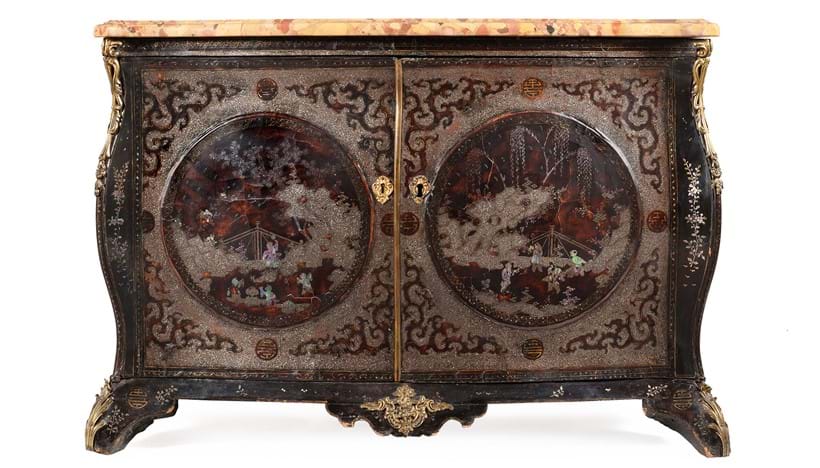 This commode was likely produced as an export item for the North European market as its form is distinctly European. It is possible that the carcass of the commode was first made in Europe and then shipped to Japan to be decorated.

The island of Deshima (or Dejima) in the Bay of Nagasaki was a centre of production for such items due to the country's policy of national seclusion. The island was the only place in Japan where Europeans were allowed to reside from 1630 to 1856.

The sale also features a number of mirrors. Varying in age, the selection acts as a visual history of the changing design of mirrors through the centuries.

A highlight from the selection is Lot 48, a George I gilt gesso girandole wall mirror, circa 1720. It is made in the manner of John Belchier. 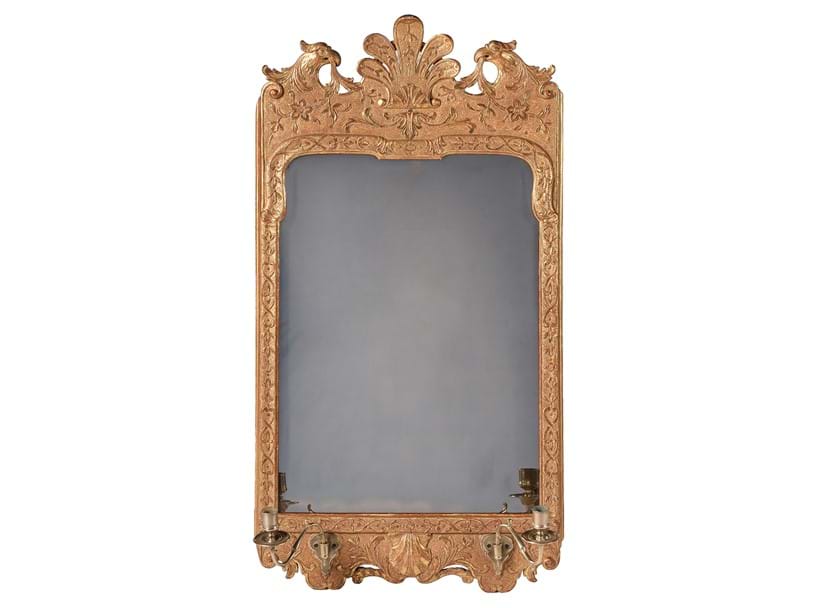 John Belchier (d.1753) is first listed in 1717 as a cabinet-maker at 'The Sun' on the south side of St. Paul's Church yard and described himself as 'a cabinett and lookinf glafs-maker' who 'grinds and  makes all sorts of fine peer and chimnet glafses and glafs sconces.... at reasonable rates'. His most significant commission was for John Mellor at Erddig, Wales, a commission which included a state bed, pier tables, and numerous pier glasses, along with an impressive bureau-cabinet. Significantly it is Belchier's bureau cabinets that are most frequently labelled, and due to his ability to work with glass all have mirrored doors to the cabinet sections. His work at Erddig is discussed by Martin Drury, 'Early Eighteenth Century Furniture at Erddig', Apollo, July 1978, pp. 46-48, in which many of the pier-mirrors are illustrated.

A rare item that we will be offering is Lot 109, an 18th century Florentine Scagliola panel by Lamberto Cristiano Gori, which comes to auction with Danish Royal provenance. It is signed and dated either 1752 or 1782. In 1975, we know that it was in the collection of His Royal Highness Prince Georg of Denmark. 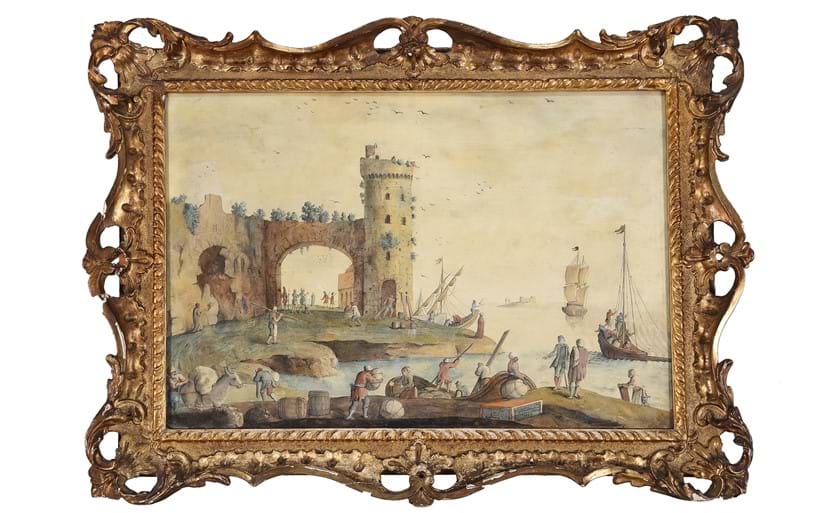 This Scagliola panel is decorated with an Italianate harbour scene; the foreground features merchants and portside figures, with a castle tower and soldiers beneath, with ships beyond.

Lamberto Cristiano Gori (1730-1801) was apprenticed to the monk Don Enrico Hugford of Vallombrosa, regarded as one of the leading exponents of the art of Scagiola in the 18th century. John Fleming in his article 'The Hugfords of Florence' (Connoisseur, October 1955) writes that Hugford's work displays "technical brilliance, his hand revealed by the charming but unvarying colour scheme of salmon pink, pale blue, light sandy brown and smokey grey, which gives his panels the appearance of gouache paintings under thick glass, their surfaces being exceptionally smooth and translucent". In his technical mastery Gori rivalled his master but, unlike him, his work tended to be less inspired by known observable landscaped and more by a leaning toward capricci- freer extemporizing interpretations of the scenes around him.

The auction then finishes with a substantial garden section. With the sale taking place at the end of March, it is just the right time to start getting your gardens ready for the summer months. If you are looking for some statement pieces, we have Lot 516, a pair of 20th century monumental carved stone elephants, depicted as opposing forms with trunks aloft.

Another impressive item is Lot 527, an early 19th century large Italian carved marble figure of a lion, after Antonio Canova (Italian 1757-1822). Formerly, this lion once stood in the gardens of The Old Rectory in Widdington. 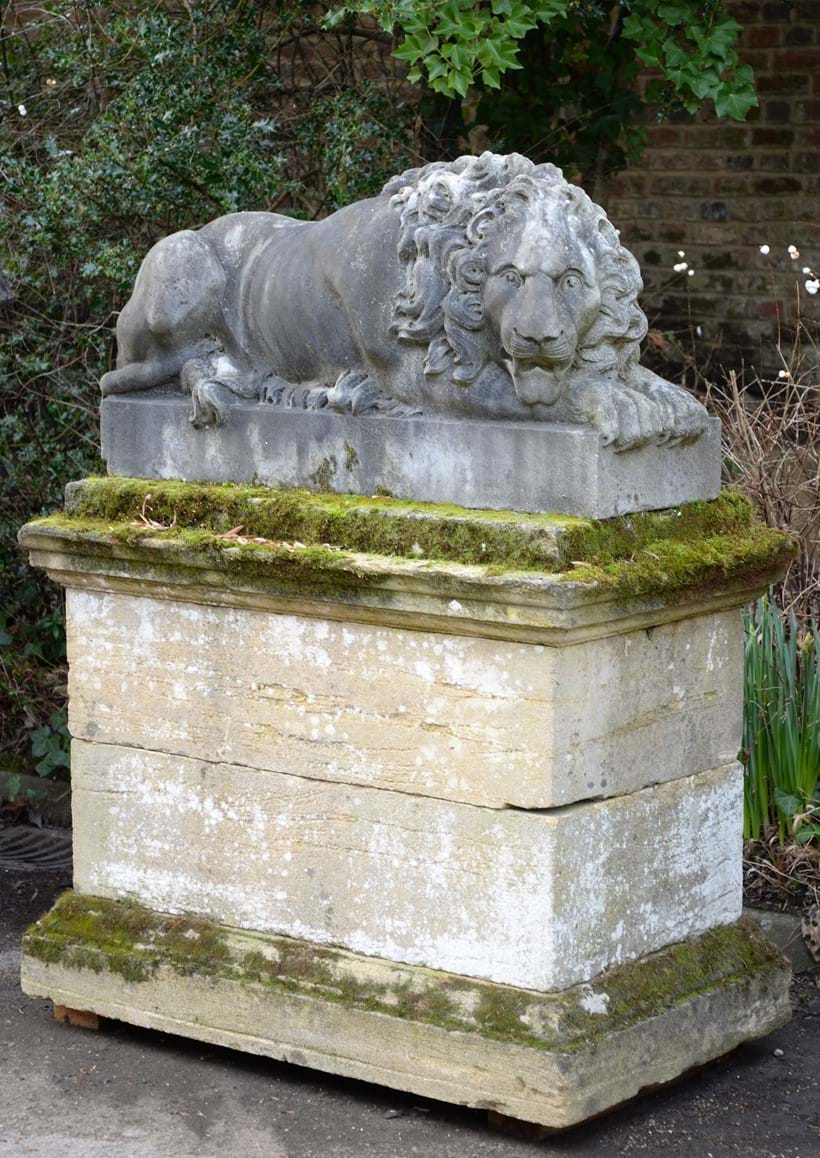