On Wednesday 21 July, we have our auction 'A Lifetime's Passion: Property from the Fell Collection. The collection embodies the love, care and passion that all collectors have for the arts.

Dreweatts is delighted to have employed the talents of Charles Benjamin of Acroterium to help style and present the catalogue. Charles brings his experience, exceptional eye and flare for use of colour to bring to life many of the lots in this sale using the sumptuous interiors of Kirtlington Park as a backdrop. 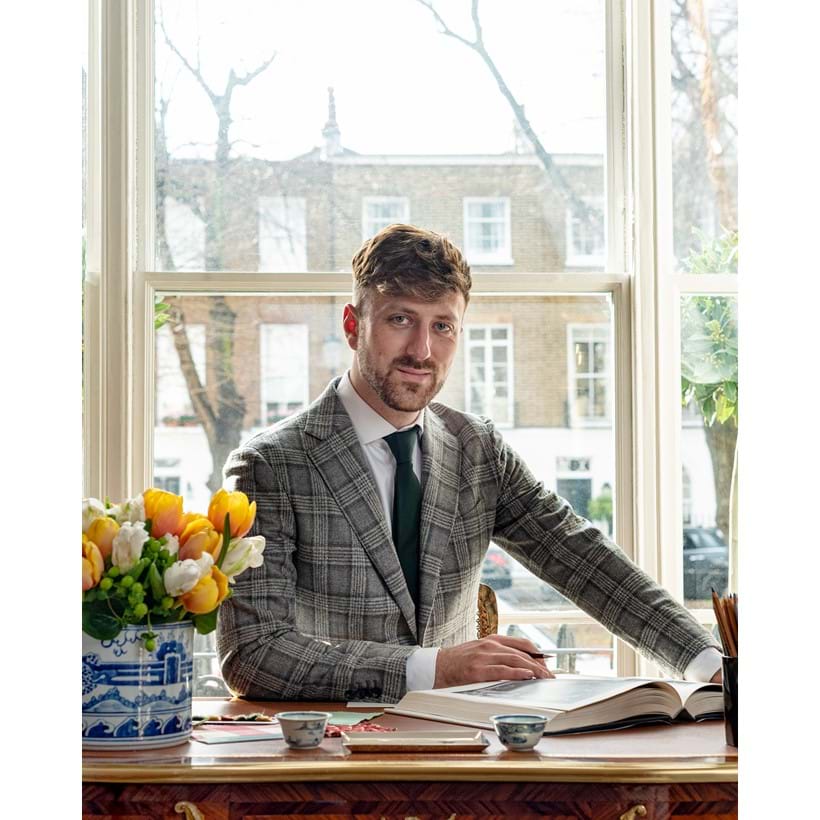 From neo-classical sculpture, Chinese porcelain, and fine silverware, to French mantel clocks, specimen marble tables, and exceptional antique furniture; The Fell Collection effortlessly reaches across genres, styles, and periods, keeping history and provenance at its core. It furthermore exhibits an extensive assemblage of traditional British and European art, moving into the more contemporary period with works by Marcel Dyf and Edward Seago. The antique combined with the modern beautifully echoes the country-house style we fondly practice today. 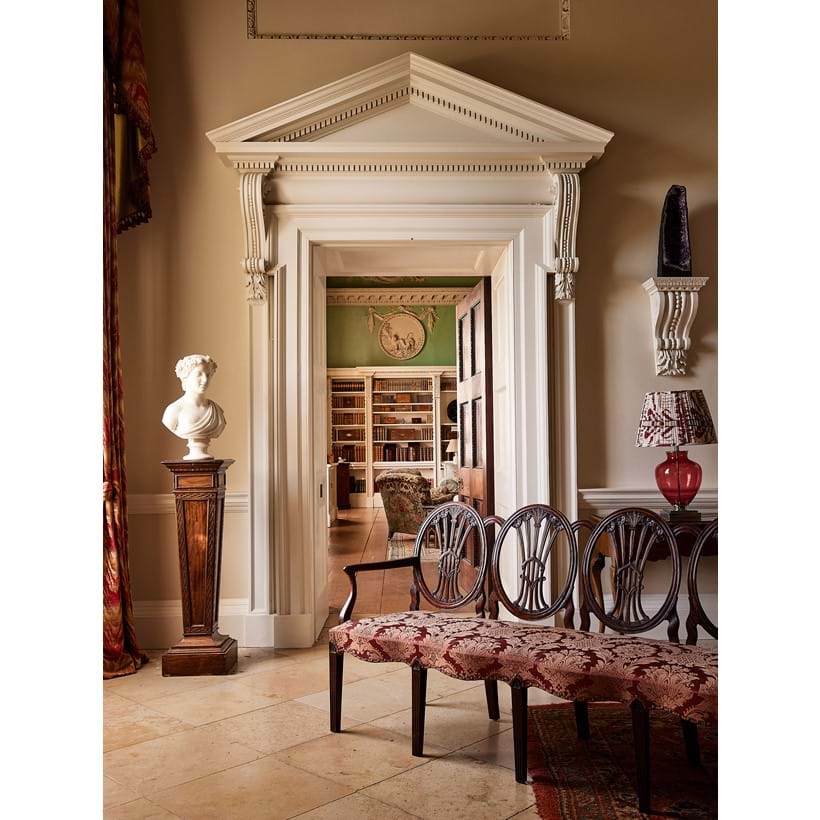 The Fell Collection at Kirtlington Park

A highlight from the auction is Lot 29, this Anglo-Chinese George III carved paddock chair-back settee, dating from the late 18th century. The quadruple oval backs are designed with pierced splats, headed with stylised sunflowers and stiff leaves. The serpentine stuffed seat is then covered in damask, above stop-fluted tapered square legs, headed by foliate-carved lancet capitals.

Whilst the present chair-back settee does not appear to be based exactly on an English original, it draws inspiration from the chair designs of Hepplewhite and Sheraton. 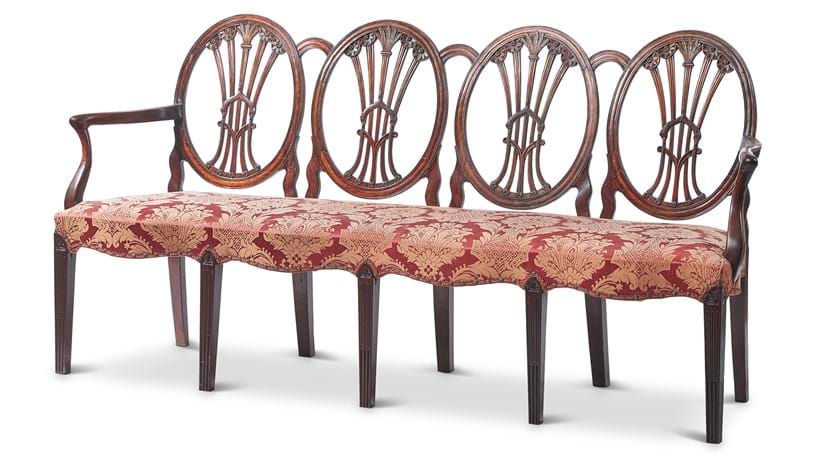 Lot 14 is a set of four early 20th century 'Bromsgrove Guild' lead garden putti, modelled by Walter Gilbert. Spring can be seen holding a nest of chicks, whilst Summer is modelled with a butterfly on her left hand, Autumn is holding a leafy branch above her head, and Winter is swathed in a loose robe.

These were originally owned by H C Moffat of Hamptworth Lodge in Salisbury, where the garden was designed by Thomas Hayton Mawson, thence by descent until they were sold at Tennants auctioneers on 22 July 2018. 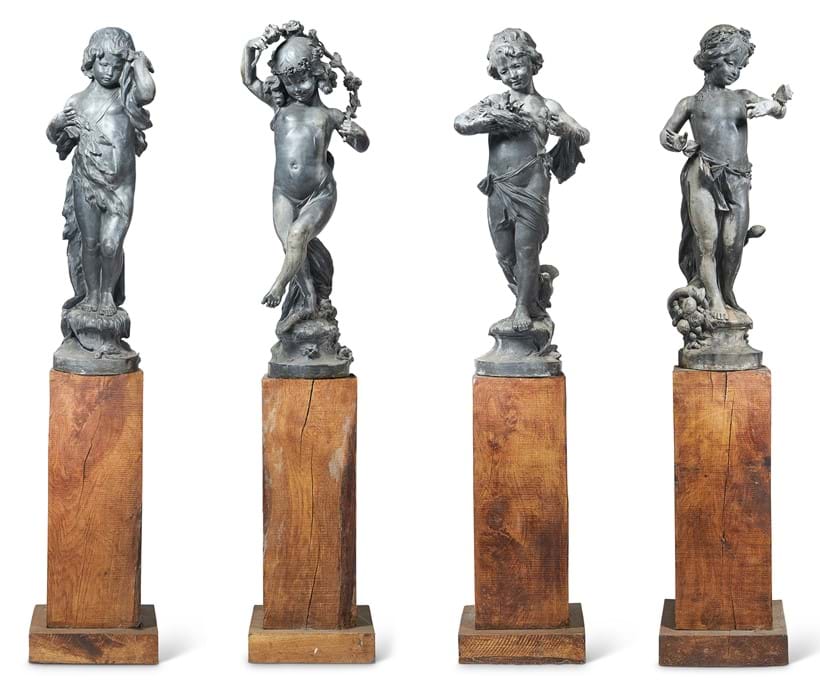 The Bromsgrove Guild of Applied Arts (1898-1922) emerged from The Bromsgrove School of Art having been founded by the School's headmaster Walter Gilbert. Initially, The Guild operated from studios in Bromsgrove, Birmingham, initially producing decorative ironwork. In later years the firm expanded its production to include bronze and lead work as well as wood and stone carvings and stained glass. The Guild also featured in the 1900 Paris Exposition securing nine medals as well as participating in major municipal exhibitions including The Arts & Crafts Society Exhibition, London 1903. By 1908 the business had established a retail outlet in Victoria Street, London, as a result of their most famous commission, the iron and bronze gates outside Buckingham Palace as well as Queen Victoria's memorial. In 1922 the firm restructured as a Limited company, turning its attention to the production of more commercialised range of goods including gates, railings, signs, pendant light fittings and memorial plaques. Fortunes declined coinciding with the 1930s depression and in the final twenty years the business (1946-1966) the business was managed by George Whewell.

Another highlight is Lot 176, a pair of Victorian silver four light candelabra by John Hunt & Robert Roskell, London 1876. Each is engraved with a coat of arms. These are the arms of Fitzherbert Wright (1841-1910) of Osmaston Manor in Derbyshire and his wife Charlotte Rydolphine Louise von Beckman (1847-1932). 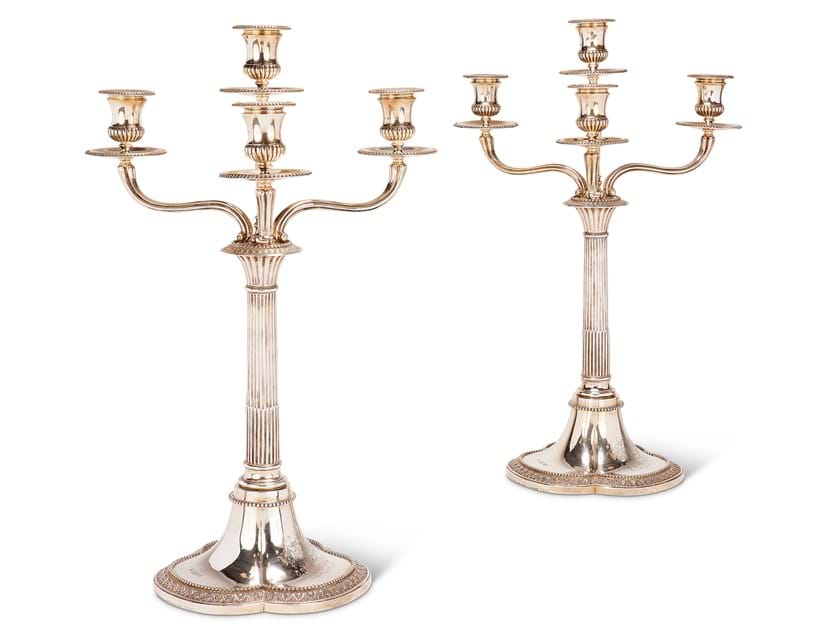 From the selection of British and European art, we have selected Lot 38, The Vicar of Wakefield by British artist William Powell Frith (1819-1909).

The Vicar of Wakefield, was a novel written by the Irish author Oliver Goldsmith. Published in 1766, it was one of the most popular 18th century novels of the Victorian age. Written as a 'fictitious memoir' with a riveting riches to rags and back again storyline, Frith had a particular liking for the novel and in addition to the present lot which was exhibited at the Royal Academy in 1876, also painted two more scenes from the novel which were exhibited at the Royal Academy in 1841 and 1842. The second of these two works, Measuring Heights, is now in the collection of the Victoria and Albert museum, London. Both the lot offered here and Measuring Heights depict scenes from Chapter 16 of the novel. 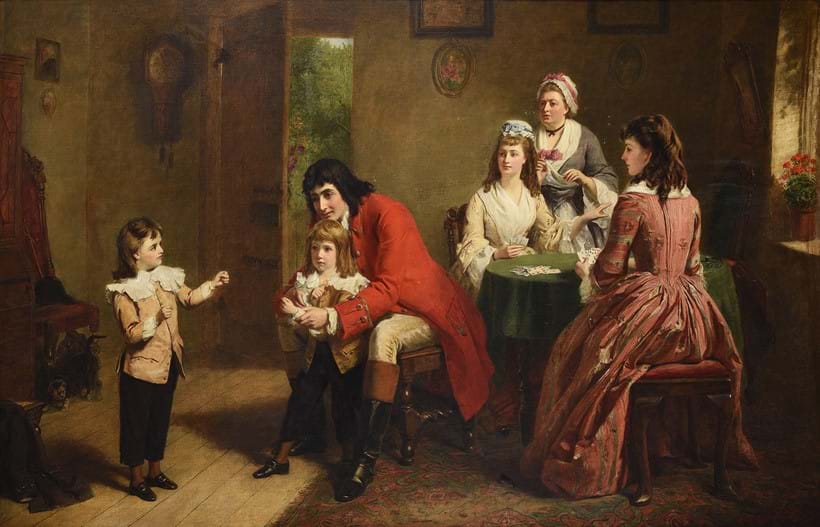 Frith often painted happy family scenes throughout his career, which was not reflective of his own personal life; during the course of his life Frith had two families, one with his first wife and twelve children, and one with his mistress, Mary Alford, and their seven children who lived a mile down the road. Described as the 'greatest British painter of the social scene since Hogarth' he often chose literary themes for his subjects including a number of works based of the works of Charles Dickens. He was elected to the Royal Academy in 1853 and by 1876, Frith was firmly established as the most successful painter of his generation. Just the year before he painted this scene, his painting Before Dinner at Boswell's Lodgings, 1868, achieved the highest auction price to date for a living artist.

Finally, we wanted to take a look at Lot 228, this oil on board by British artist Edward Seago, depicting a canal scene in Venice. Edward Seago was one of the most popular English landscape painters of the 20th century.

This was previously exhibited by London galleries Frost & Reed, The Taylor Gallery and Richard Green. It was then sold at Christie's on 16 June 2015 in their auction Victorian, Pre-Raphaelite and British Impressionist Art. 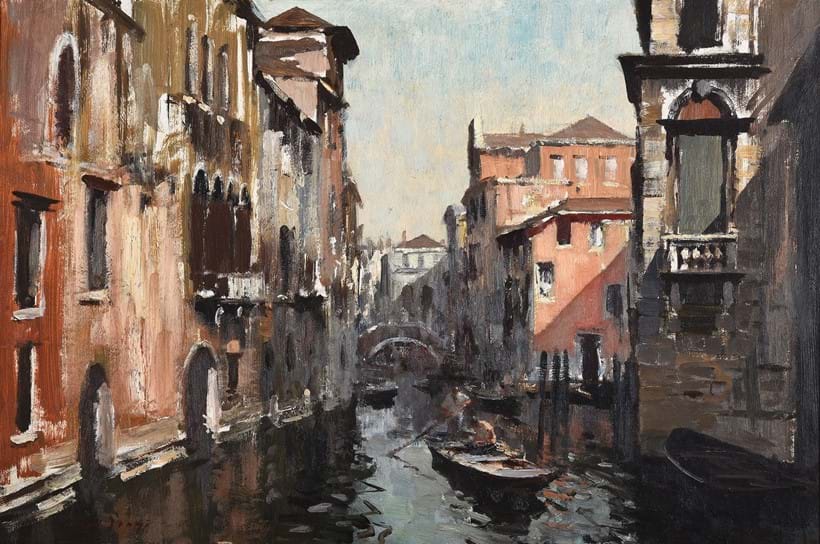 Viewing in person is by appointment and in accordance with Covid-19 regulations.