Introducing an important timepiece from the most significant workshop in the 'golden age' of English clockmaking.

Thomas Tompion is often referred to as the 'father of English clock and watchmaking' and when considering the legacy of his work and influence on subsequent generations, such a tribute is justly deserved.

Here we present an overview of the career of Thomas Tompion and a summary of his timepiece from the upcoming auction. 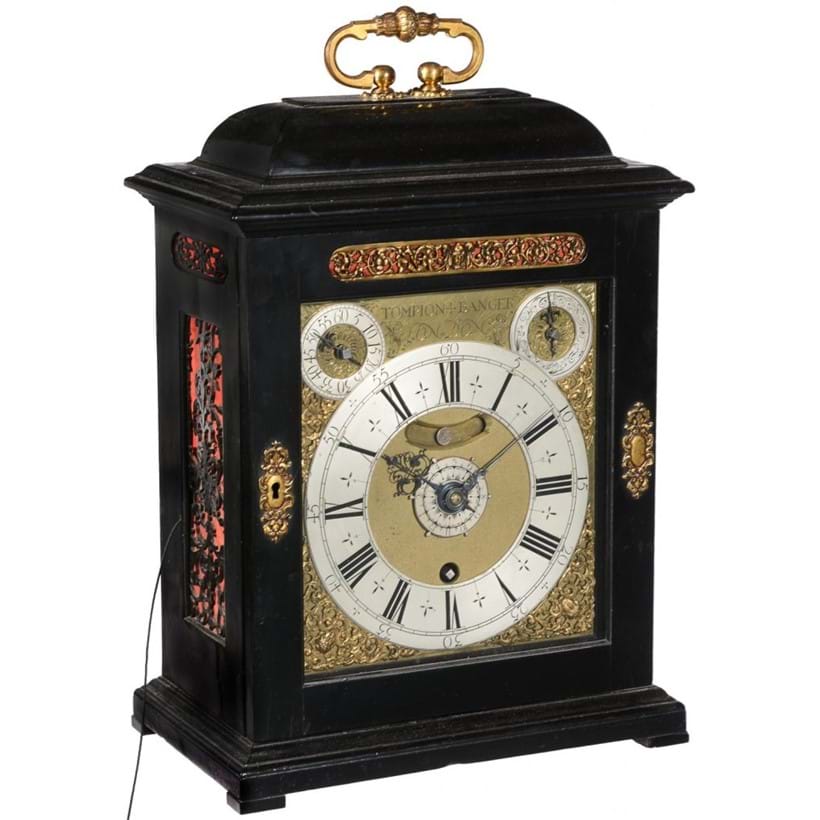 Born in Ickwell, Suffolk in 1639 Thomas Tompion appears to have developed an affinity for metalworking from his blacksmith father, also named Thomas. By 1670 Tompion had moved to London and was working in the clock and watchmaking trade. There is no record of his apprenticeship or whether he received any formal training prior to moving to London, but he quickly became established and obtained his freedom of the Clockmaker's Company in late 1671. 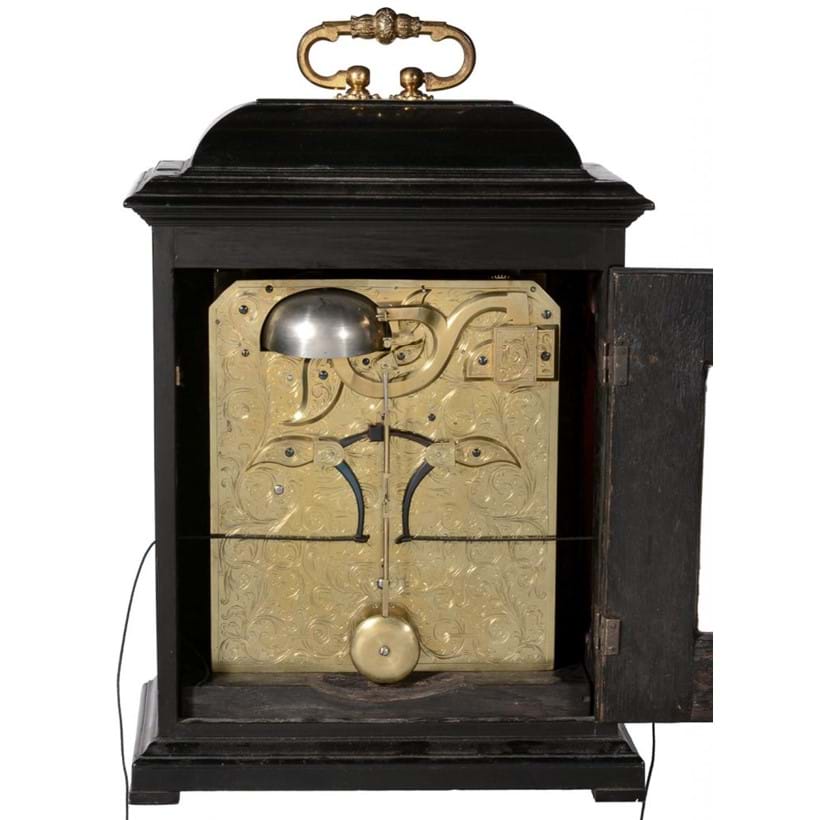 His early clocks demonstrate a close working relationship with the Fromanteel, East and Knibb workshops. Around this time Tompion became friendly with eminent mathematicians and scientists such as Robert Hooke and Jonas Moore - perhaps the most progressive and inventive minds of the day. Such associations lead to Royal commissions, firstly from Charles II for whom Tompion is known to have made one of the earliest balance-spring watches in 1676 and later William III who ordered numerous clocks to furnish his various palaces throughout his reign. 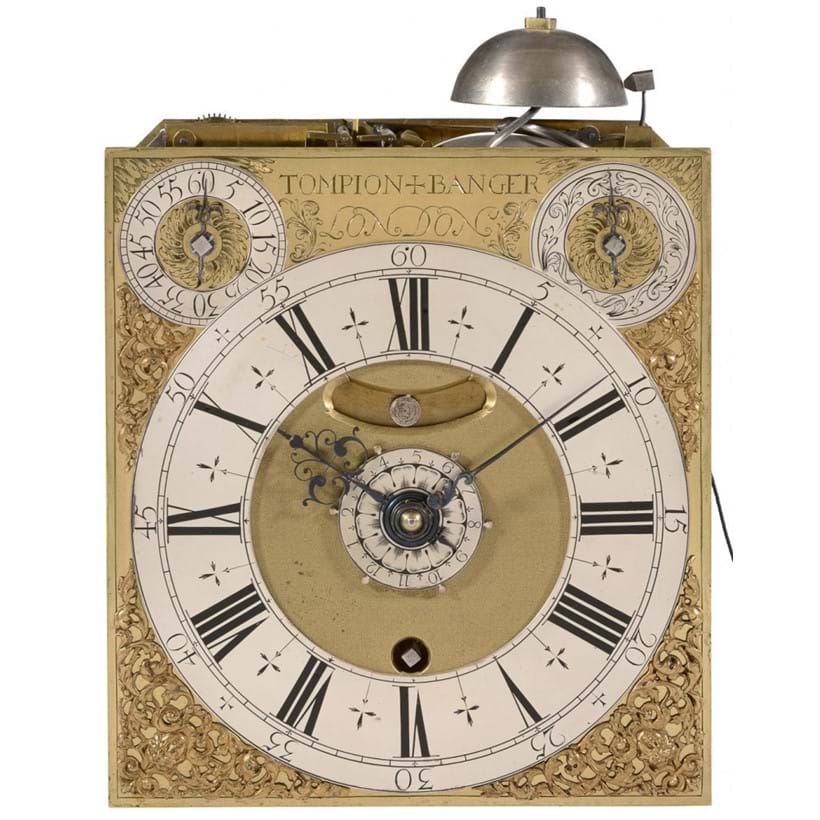 A high degree of refinement

As well as being an extremely talented artisan Tompion was also commercially minded, cleverly introducing serial numbering for his watches and clocks from around 1681/2. This, as well as maintaining a high degree of refinement in both the design and construction of his clocks and watches, ensured the highest level of exclusivity for his buyers. 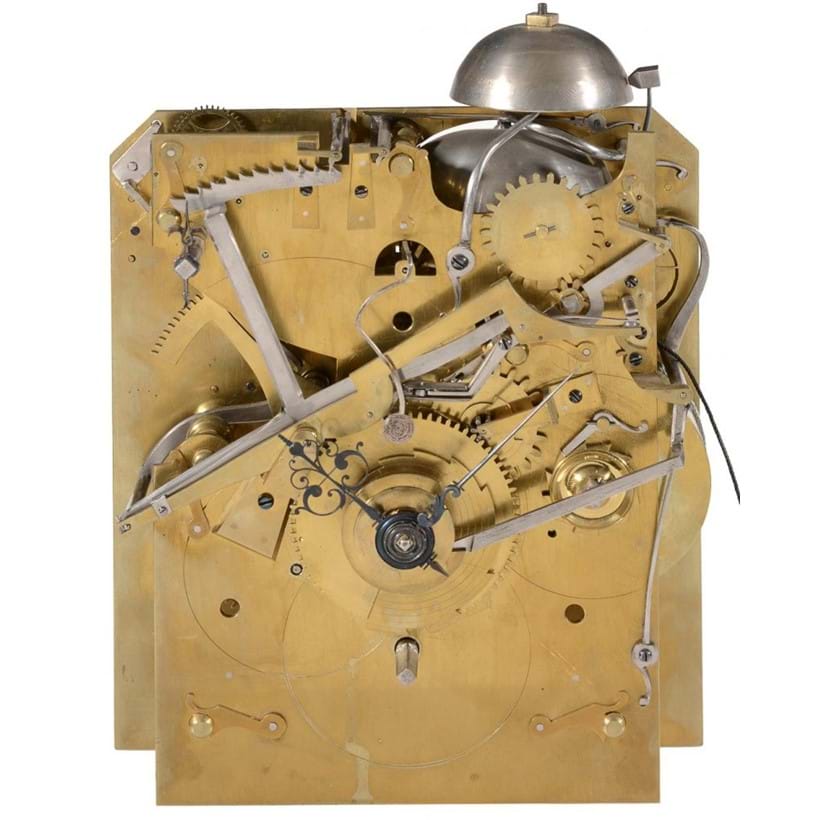 In around 1701 Thomas Tompion took a former apprentice, Edward Banger, into partnership. Banger was originally apprenticed to Thomas Ashby in 1687 but was transferred over to Tompion and gained his freedom of the Clockmaker's Company in 1695.

He was clearly a talented maker (when considering the few examples signed by Banger alone) however a serious problem between him and his former master caused the partnership to come to an abrupt end in 1707-8 for reasons unknown. On Banger's departure Tompion reverted to working alone until he found confidence in George Graham who had been engaged as a journeyman for Tompion since 1696. Graham became a partner in Tompion’s business in 1711. 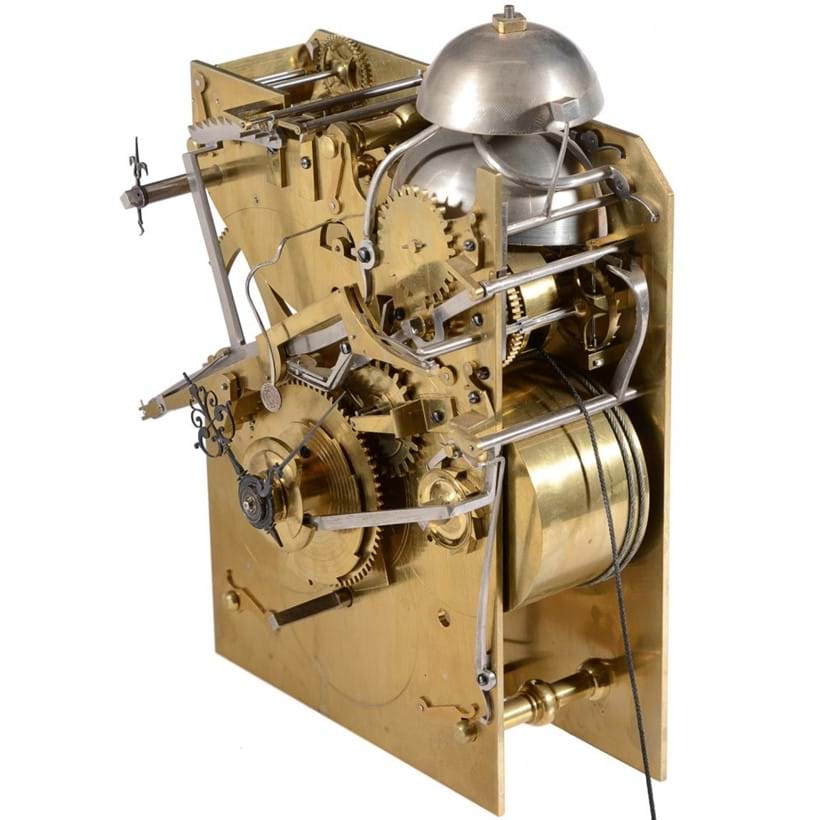 Thomas Tompion died in November 1713 leaving the business to George Graham who maintained the same exacting standards and became famous in his own right with notable achievements including the development of the deadbeat escapement for pendulum clocks and the cylinder escapement for watches. Edward Banger outlived Tompion by six years, and he is regarded to this day as a highly skilled watchmaker. 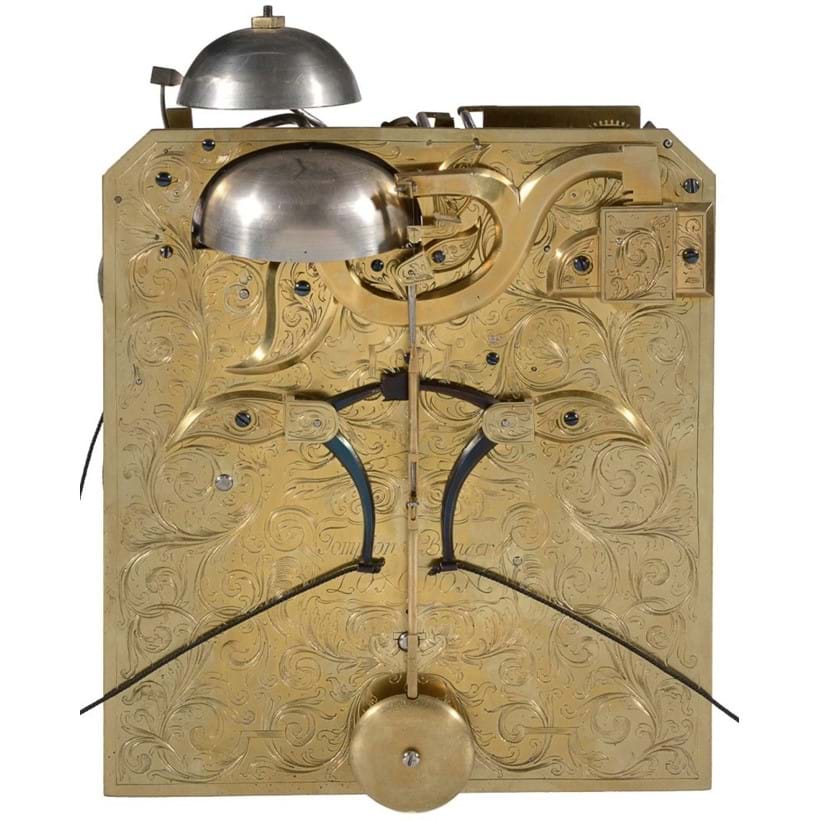 This lot belongs to a group of around half a dozen Tompion spring clocks, the movements of which were held in stock and completed at a later date. It would appear that all of these were silent-pull quarter timepieces with serials numbers clustered from 79-117 indicating that they were made 1686-88. The fact that both the dial and movement of the current lot are signed by Tompion and Banger together would suggest a date of finishing shortly after 1701. 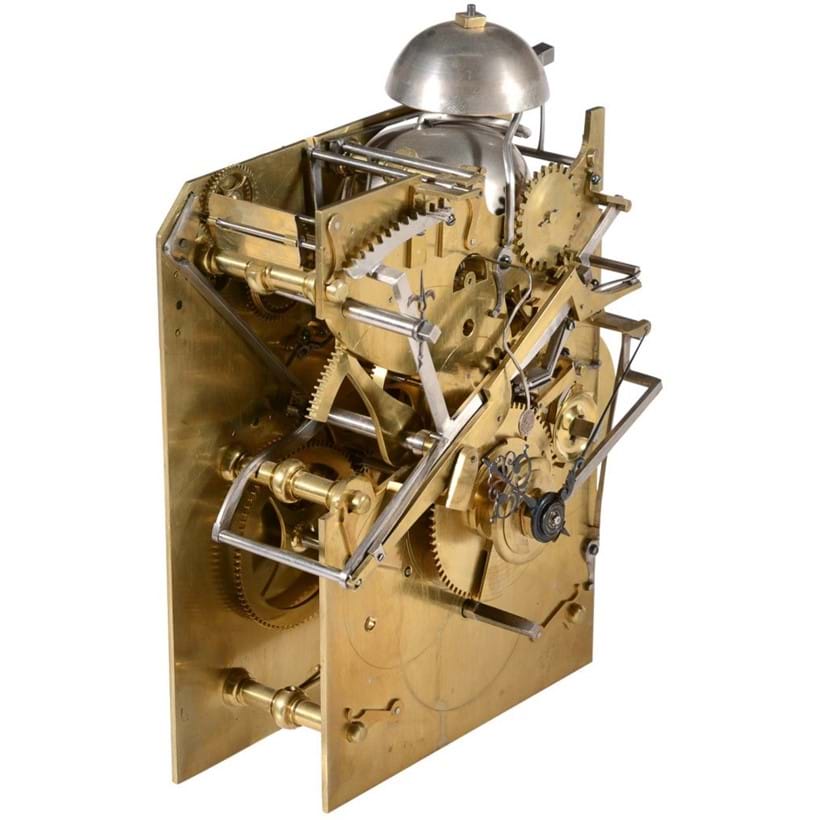 Silent-pull quarter repeating timepieces were essentially made for use in the bed chamber whilst clocks which incorporated normal striking (as well as a quarter-repeat mechanism) were mainly intended to be brought ‘downstairs’ during the day. Consequently silent-pull timepieces were the preserve of very wealthy clients who could afford separate timepieces for both ‘downstairs’ and ‘upstairs’ use. 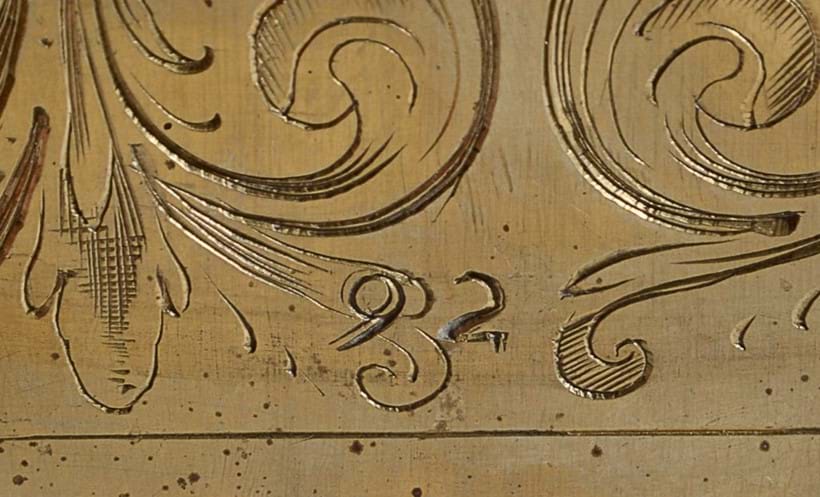 A worthy addition to any collection

The current lot also incorporates an alarm mechanism (which appears in only half a dozen quarter-repeating timepieces by Tompion) which, together with a duration of one month, would render it perfect for use in a bedchamber of a palatial property. There is only one other silent-pull quarter-repeating alarm table timepiece of one month duration by Tompion known - number 85.

The present lot would be a worthy addition to any collection being relatively accessible compared with other examples by Thomas Tompion.