On Thursday 26 May, we have our auction of Old Master, British and European Art. Featuring oil paintings and works on paper ranging from the 16th to the 19th century, we are pleased to offer a private collection of works by John Anster Fitzgerald, one of the most idiosyncratic and celebrated Victorian painters, and his descendants (Lots 153-191). 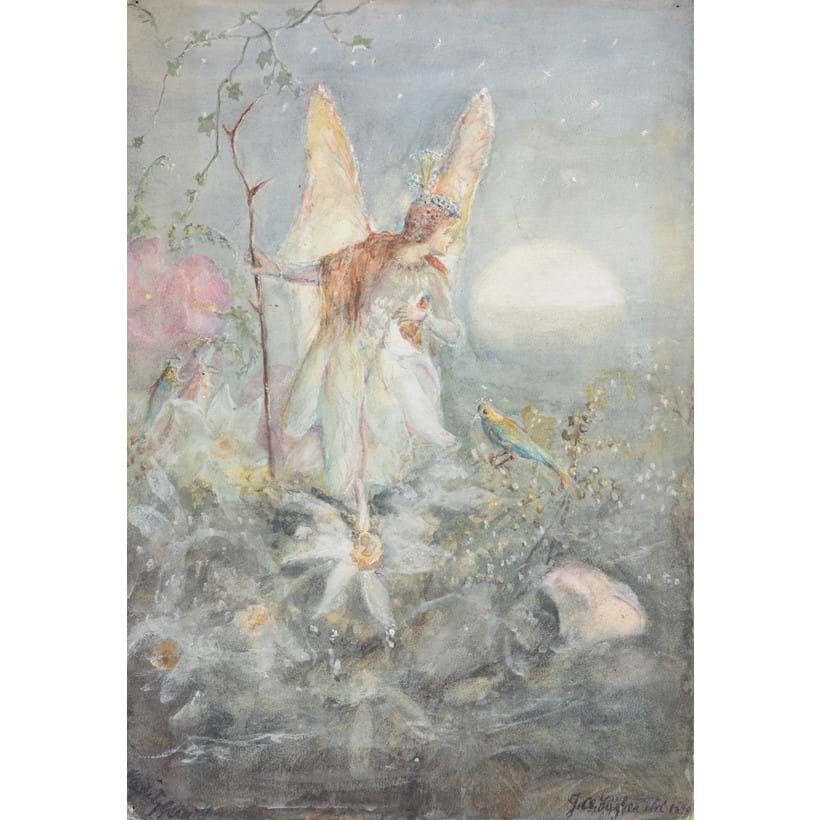 The thirty-eight lots being offered in our May auction, have never appeared on the market before and have passed down through the family of John Anster Fitzgerald. The collection includes works by John Anster Fitzgerald himself and two of his daughters, Edith, and Florence, as well as those by Florence’s husband Walter Follen Bishop. 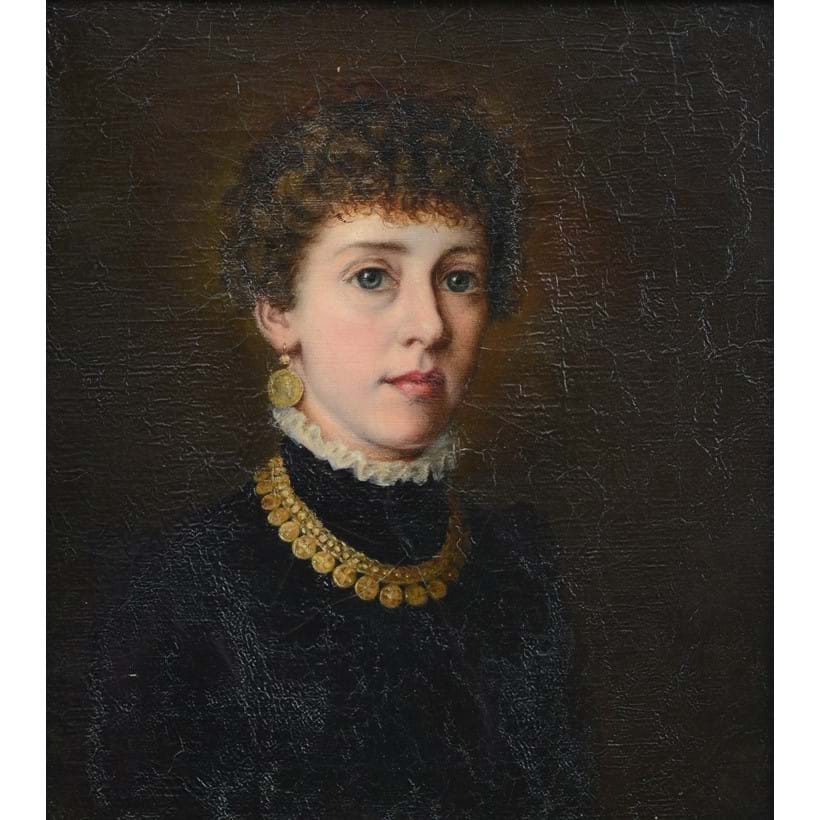 'Fairy Fitzgerald' as John Anster Fitzgerald came to be known, was one of the leading exponents of fairy paintings, which can be seen as 'a peculiarly British contribution to the development to Romanticism’ (J. Maas, Victorian Fairy Painting London, 1997, p. 11). Fairy painting began in the late eighteenth century with artists such as William Blake and Henry Fuseli who imaginatively illustrated the work of Shakespeare, particularly his more fanciful plays, A Midsummer Night's Dream and The Tempest. It reached its height of popularity in the mid-19th century and Fitzgerald’s work departed from literary tradition and instead he created his own genre of fairy painting based on folklore and legends. 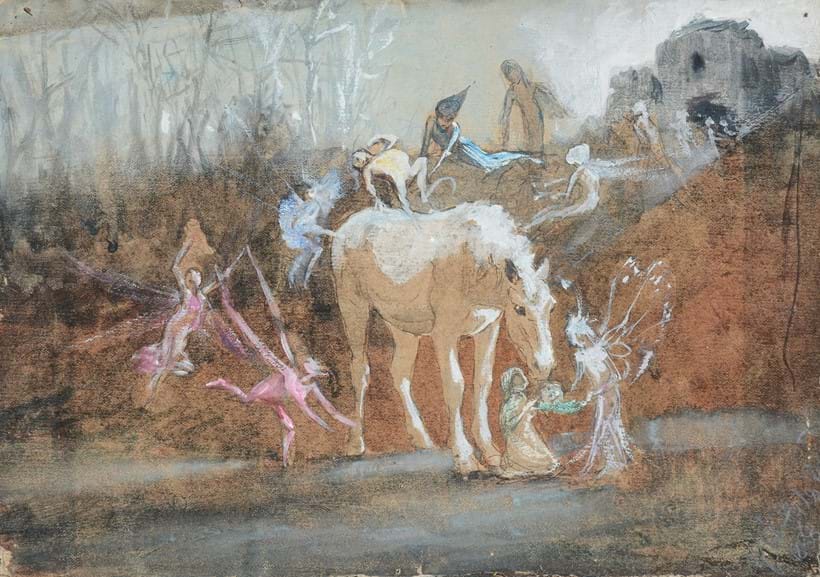 He was born in 1823 and was one of six children of the poet Thomas Fitzgerald, who Byron immortalised in his English Bards and Scots Reviewers. Apart from his membership to the Maddox Street Sketching Club there is no record of Fitzgerald’s formal artistic education, but over the course of his career he exhibited 196 pictures, mostly portraits, nude studies, and illustrations at The Royal Academy, the British Institution and Suffolk Street. He became a regular contributor to The London Illustrated News and produced illustrations based on scenes from pantomimes. As a member of the Savage Club, he was known for his, often satirical, impersonations of long dead actors and the theatre greatly influenced his fairy pictures which are often brilliantly lit in a way that is clearly inspired by the new stage illumination of limelight. The imaginary worlds he created in his pictures also show the influence of fevered opium dreams which were known to conjure up extraordinary imagery.

"'Fairy Fitzgerald'… was an artist who will probably be more appreciated in the time to come than he is  in his own lifetime" wrote Aaron Watson in The Savage Club (1907) and "As more of his pictures have come to light, so his reputation has increased by leaps and bounds" concluded Jeremy Maas in his introduction in the exhibition catalogue to the ground-breaking Victorian Fairy Painting exhibition at the Royal Academy in 1997. 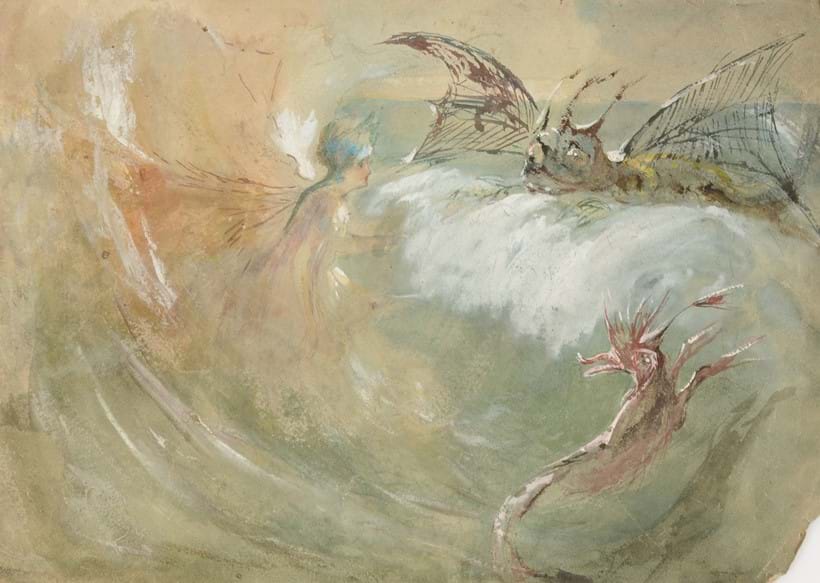 In 1849 Fitzgerald married Mary Anne Barr and they had seven children, including two daughters, Edith and Florence, whose works, including self-portraits, are in this collection. Florence exhibited pictures from 1884-89 and married the Liverpool landscape painter Walter Follen Bishop. They travelled in Africa and Australia and the collection features images of Rhodesia, including the Victoria Falls (lots 183-185) and the building of Sydney Harbour Bridge (lots 175-176). Florence and Walter settled in Australia and their work was widely reviewed. 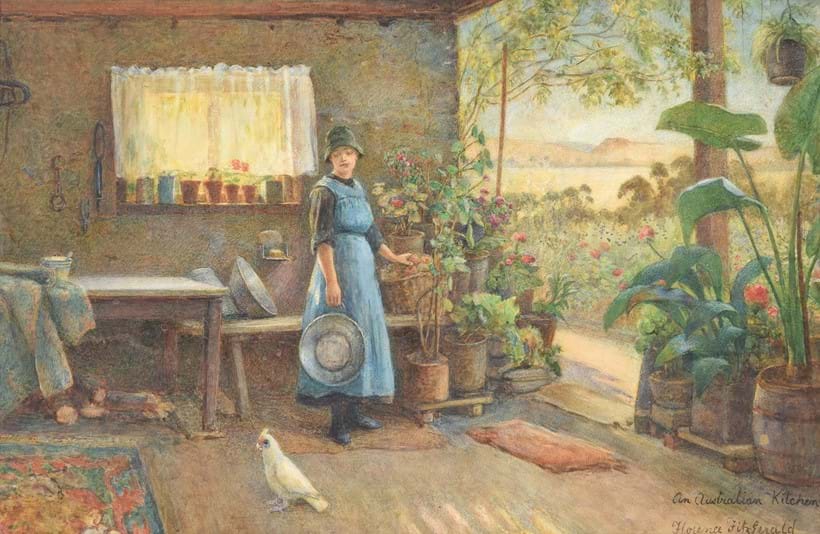 By the 1850’s Fitzgerald ushered in a new phase in fairy painting. "He removed the theatrical overtones of the subject, which had been predominant in the 1840’s, opting instead to show the fairies in a rustic setting, co-existing with other woodland creatures." (I. Zaczek, Fairy Art , 2005, p.50). The animals often appear very static which may show a debt to taxidermy and the work of the photographer J. D. Llewelyn (1810-1862) who created imaginary tableau of stuffed animals in a natural setting. The fairies are sometimes seen as benign creatures who are at-one with the animals, while others show conflict, or in this case a certain amount of teasing with snowballs and twigs. Like The Enchanted Forrest (Circa 1860) the present picture (Lot 162) is set on the edges of fairyland. The dog has come to the edge of the natural world where the fairies’ dwell behind a bramble patch. The spire of a church and a cluster of cottages can be seen in the distance, symbolising the encroachment of human activity on fairyland. 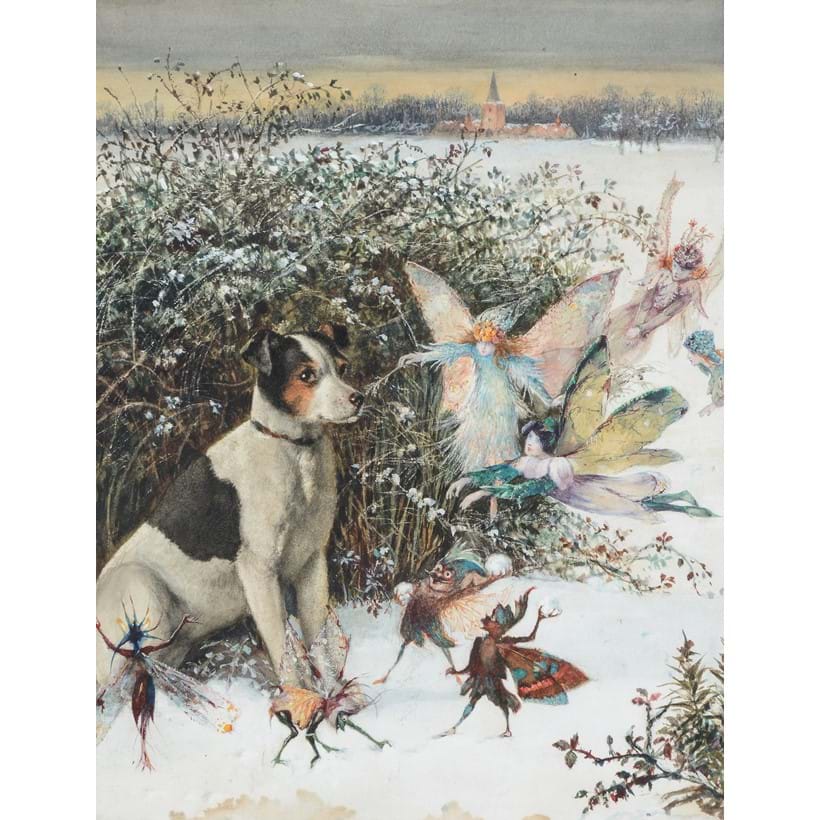 In 1922 the English firm of Dorman Long and Co. Ltd won the tender to build, the long awaited, Sydney Harbour Bridge. LOTs 175 & 176, which are studies for a larger picture, can be tentatively dated to 1926 when the concrete piers were built to support the approach spans on each side of the harbour and the erection of the steelwork commenced. 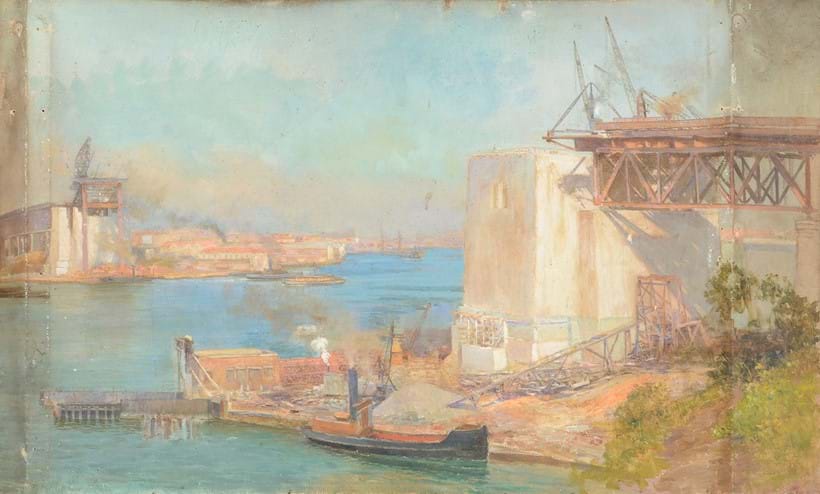