As part of our auction of Fine Jewellery, Silver and Luxury Accessories taking place on 7 July 2022, we are thrilled to be able to offer a private collection of tableware and luxury accessories by British silversmith Gerald Benney CBE (1930-2008).

Jonathan Pratt, Dreweatts Managing Director, takes a look at some of the highlights from the collection and gives us a insight into the techniques and craftsmanship of Gerald Benney, who is probably the most important designer in the revival in the art of British silversmithing in post World War II Britain.

Born in Hull in 1930, his parents were both part of pre-war British artistic life. His father, E.A. Silas Benney, was a painter and Principal of Brighton Art College, and his mother was an accomplished silversmith. Gerald studied silversmithing at Brighton College of Art, and later at the Royal College of Art in London, and opened his first silver workshop just off Tottenham Court Road in the early 1950s. During the 1950s Gerald built up his reputation and obtained many important commissions from both private and corporate clients, as well as being a design consultant for Viners cutlers and silversmiths in Sheffield.

During the 1960s, a workshop accident of using a damaged hammer head whilst hand raising a cup bowl enabled Gerald to discover one of his most distinctive decorative features. The damaged hammer head had created a textured bark finish on the pieces, rather than a plain polished surface, and Gerald incorporated this finish into many of his objects, and ultimately became known as the ‘Benney Bark Finish’. In 1964 Gerald and his family moved to Beenham House near Reading, enabling him to create an additional studio workshop in the house. 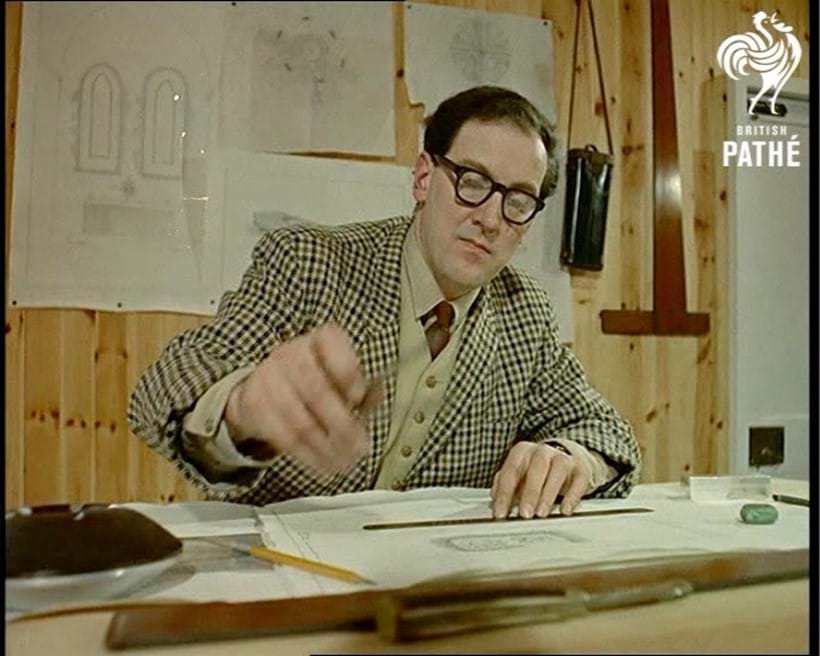 It was at Beenham House that Gerald began to produce his signature boxes, and by the 1970s enamels were added to Benney’s boxes and objects. Enamelling had almost become a lost art by the 1970s, but Gerald persuaded Norwegian enameller, Berger Bergersen, to come to Beenham to teach Gerald and his craftsmen the art of enamelling. Bergersen had learned his enamel craft at Bolin in Stockholm from some of Fabergé’s enamellers after they had fled to Sweden following the Russian Revolution. Through trial and error, Gerald and is team undertook enamelling of the most complicated kind on technically the most demanding surfaces with stupendous results.

The British Royal Family have been major patrons of Gerald Benney, and he held four Royal Warrants in the 1970s and 1980s as Goldsmith and Silversmith to HRH The Duke of Edinburgh, HM The Queen, HM Queen Elizabeth the Queen Mother and HRH the Prince of Wales. His other achievements include: Freeman of the Goldsmith’s Company; Liveryman of the Worshipful Company of Goldsmiths; Royal Designer for Industry and a Professorship at the Royal College of Art. Gerald’s pieces can be found in many important collections including at the Victoria and Albert Museum, The Crafts Council and the Goldsmiths’ Company.

Highlights from the collection 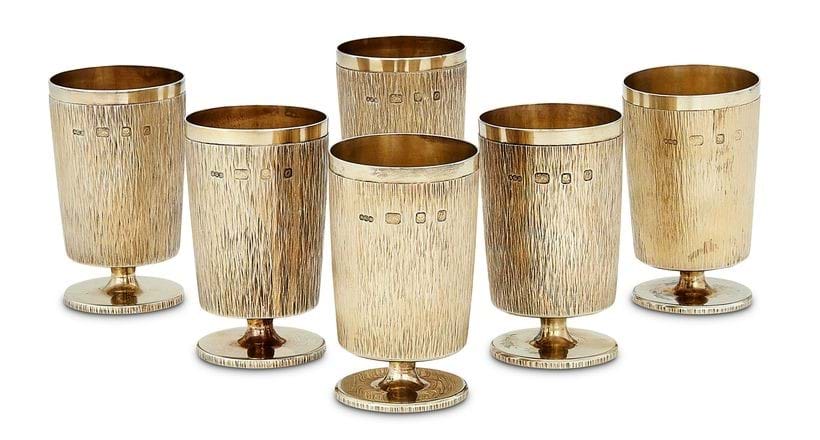 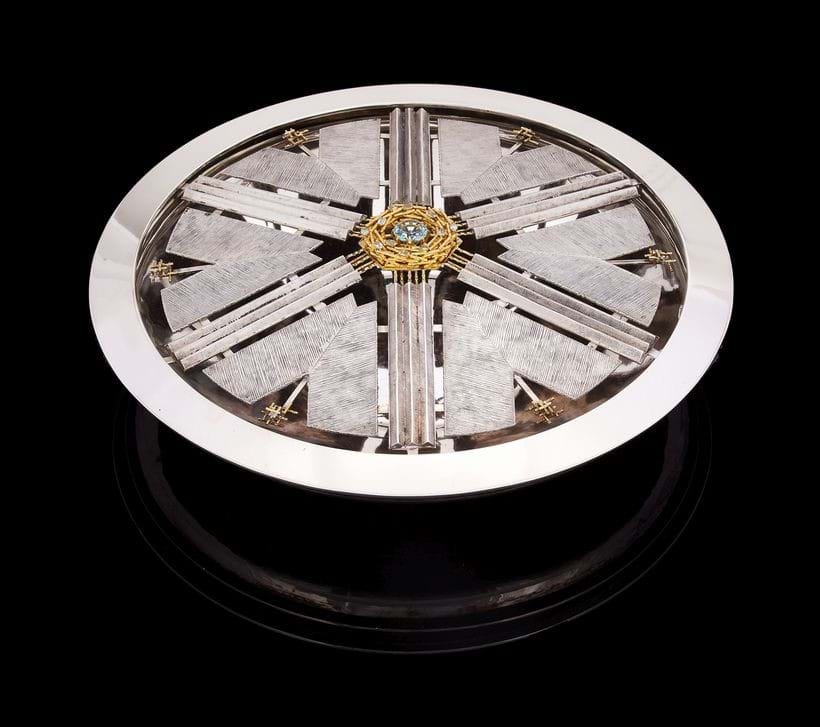 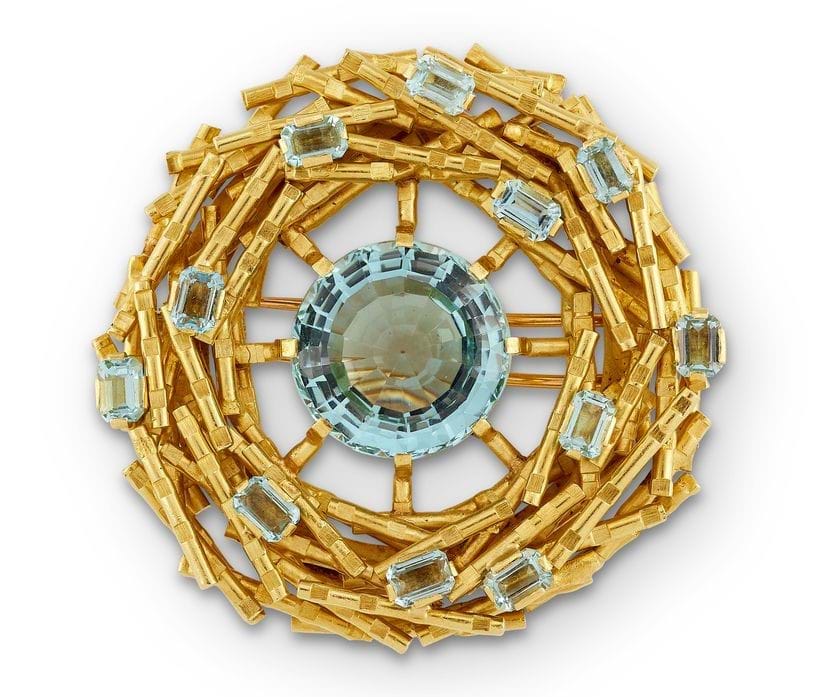 Detail from Lot 109: The removable gold coloured and aquamarine brooch

During the 1950s Gerald Benney began to receive both private and commercial commissions for large and small one off pieces. By the early 1960s he had developed his own unique centrepiece bowl design, which was much shallower than the 20-30cm high centrepieces of previous generations. He produced these centrepieces in varying designs his career. The flat open work covers of Gerald’s centrepieces are highly sculpted with a variety of abstract flowers and insects, or set with gemstones such as the lot being offered here.

Lot 110: A pair of silver gilt and enamel goblets 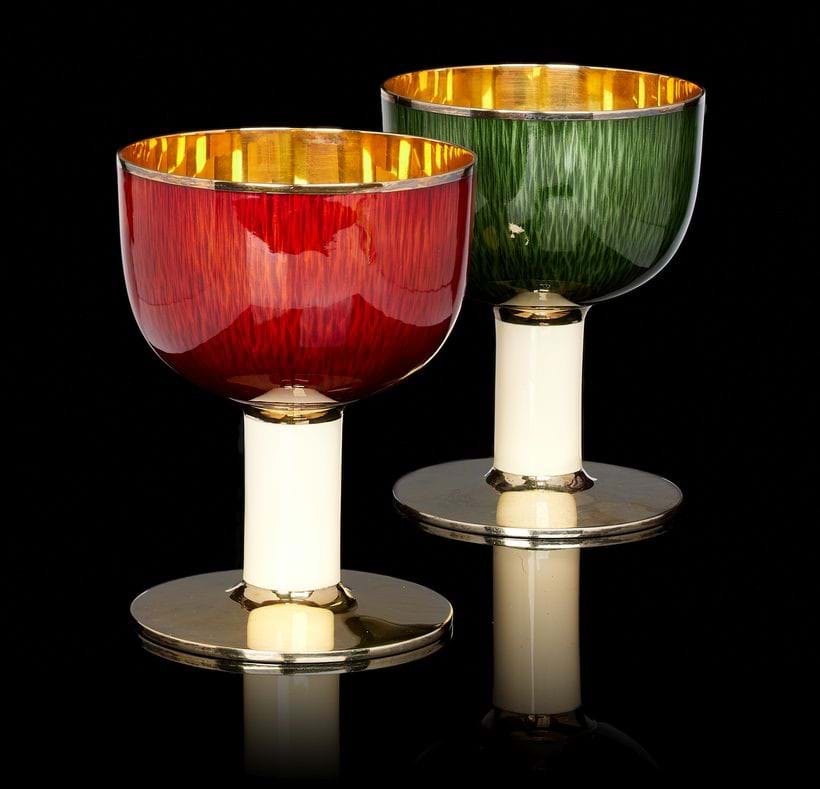 Literature: Andrew J. and Styles D. ‘Designer British Silver from Studios Established 1930 -1985’, Antique Collector’s Club 2015, p 104 for an identical green and ivory enamelled goblet dated 1970. The authors note that this 1970 goblet was an early example of Benney’s enamel work, and would have been extremely difficult to execute as the surface is both large and curved. Gerald Benney commented himself during their early enamel experiments that ‘For two years great crates full of rubbish. The least speck of dust, or a tiny air bubble, can ruin enamel’.

Lot 112 (right), also made by Gerald Benney in 1975, is an 18 carat gold and enamel circular box with Master Enameller's marks for Alan Alfred Evans.   It features red translucent enamel over a sunburst ground and measures 5cm (2in) diameter, 111g gross and also comes with a Gerald Benney leather case.  Est. £4,000-6,000 (+ fees).