Dreweatts are delighted to be offering a private collection of Irish art in our forthcoming Modern and Contemporary Art auction on Thursday 18 March. Comprising 24 works, this collection has been passionately collected and curated over the past 30 years and includes works by celebrated Irish artists such as Gerard Dillon, Markey Robinson, Colin Middleton, Felim Egan and Martin Finnin. Ahead of the auction, Dreweatts Picture specialist, Francesca Whitham takes a look at some of the highlights.

I never thought I would say it, but I miss crowds, I miss people, I miss gatherings and I miss being able to do ‘normal’ things. The work of Gladys Maccabe has certainly struck a cord whilst I have been working on the collection of Irish works. 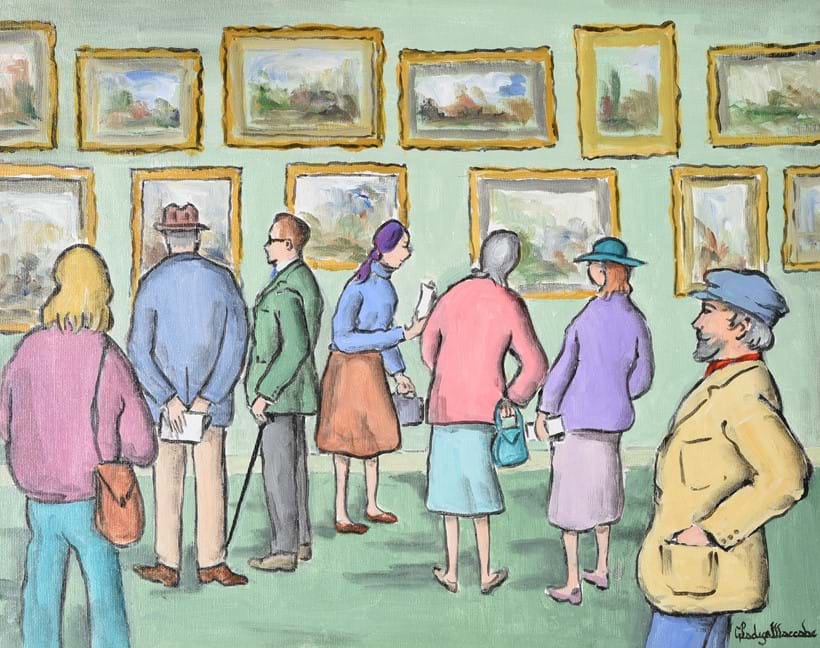 Her work is concerned primarily with gatherings of people going about their everyday lives whether that be a moment in time captured at a market, a beach or at the races. Lot 8, titled ‘Gallery Visitors’ is a particularly beautiful piece which illustrates figures frozen in mid conversation and thought. 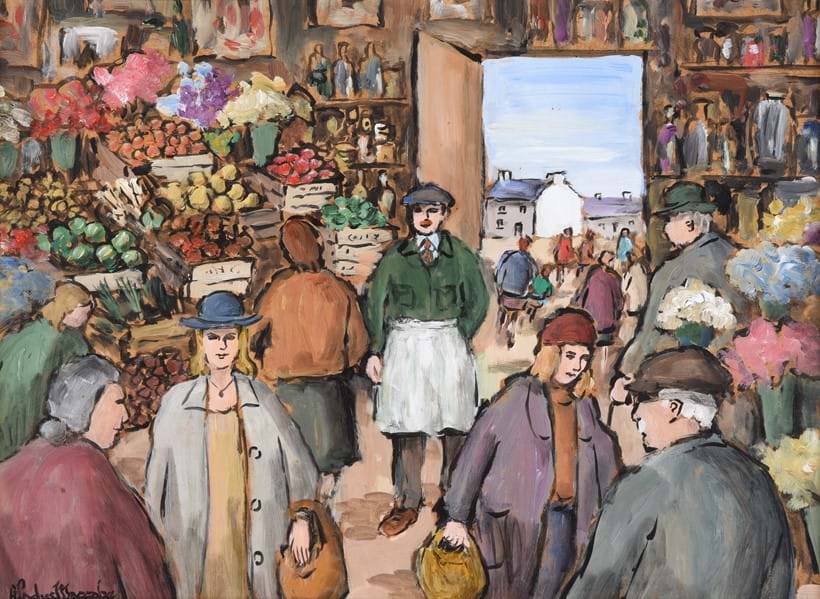 These works by Maccabe are particularly poignant today as they signify the things we used to take for granted. That said we must remain positive and I trust it won’t be too long before we can stroll the corridors of the National Gallery and enjoy the hustle and bustle of our local farmer’s market.

Included in the collection is three pieces by Gerard Dillon (1916-1971). Dillon's three brothers tragically passed away within quick succession of one another between 1962-1966. This traumatic period of loss gravely affected his state of mind. His works turned into a form of escapist art as Dillon tried to cope with the loss of his brothers. Throughout this period he returned continuously to the motif of the clown and the figure of Pierrot. This was a theme that was explored by other artists in the Ulster group in the 1960s. They were interested in the subject of the relationship between comedy and tragedy and this would come to be a prominent feature in the work of the group. 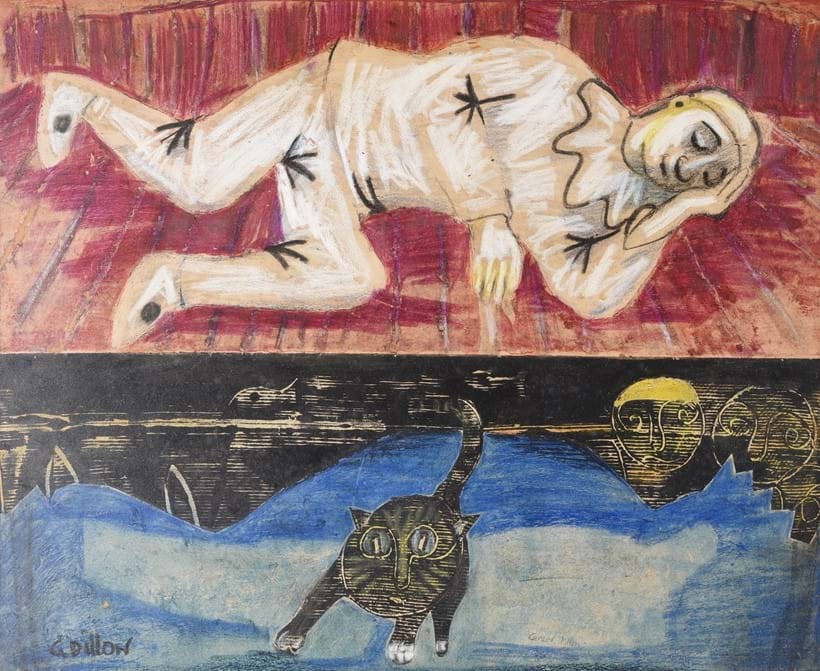 Lot 1 shows Pierrot lying peacefully on his side sleeping in the upper half of the picture. The viewer is struck by the colour contrast of the bright white against the rich red which leads to the lower half of the picture which is much darker. A nervous looking black cat is depicted right in the centre with two indistinct faces towards the upper right. It is possible that the Pierrot and the two faces represent each of Dillon's three brothers. 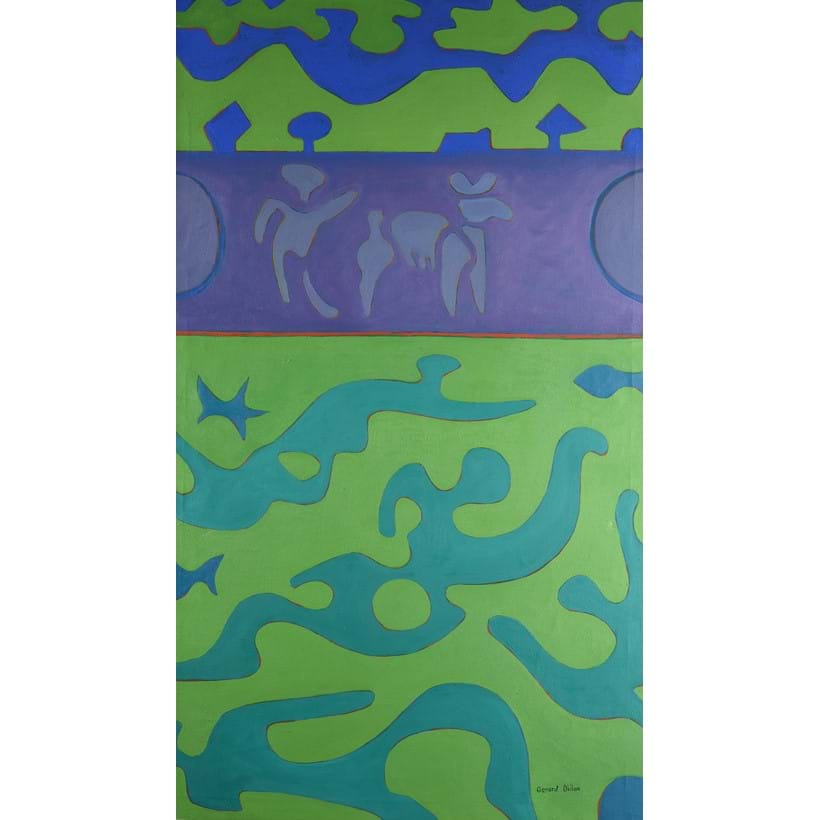 Dillon's interest in complete abstraction began whilst spending time in London during the 1950s. During this time, Dillon was influenced by artists such as Rothko, de Kooning and Pollock exhibiting at the Tate. This transition into abstraction continued throughout his career. We can see how playing with geometric patterns, reoccurring lines and elements of surrealism began to influence his work. The simple shapes remind us of Dillon's work with cut-outs and experimentation with linocut printing techniques. The horse and figure are possible motifs harking back to Dillon's interest in the people of the West of Ireland. The colour palette is emotive and striking, focusing our attention on the repetition of shape and pattern across the canvas. 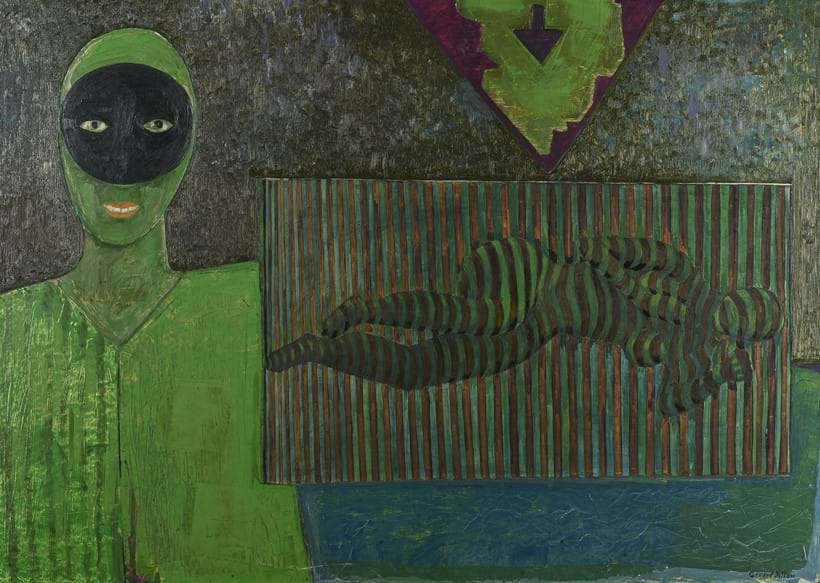 Dillon spent the majority of his career between Belfast, London and Dublin, favouring the excitement of city life and immersing himself in artistic communities with likeminded poets, writers and artists. However, an underlying yearning for the countryside is a theme which reoccurs throughout the artist's body of work, in particular views of Connemara and portraits of characters from the West of Ireland. This sense of escapism found throughout his work, came hand in hand with his search to find a self-assured identity as he struggled to express his sexuality. Dillon used motifs such as the masked figure to represent himself through his art and express his feelings of entrapment and desire to consolidate his identity. The mask signifies an attempt to disguise oneself, instead of facing up to our own fears and inadequacies.

There are two works by Markey Robinson included in the collection. Lot 6 titled ‘Shawlies in the village’ is an early example of his work. Shawled women, or Shawlies, were a common theme for Robinson and one which he revisited throughout his career. As was typical of the artist, very few facial features are visible in the women painted here. The overall effect and purpose of these works was not one of personal identification, but instead an embodiment of what the Shawlies represent: a yearning for peace and serenity. Growing up in Belfast during the Second World War, these works were a commentary on escapism; looking to the more simple life of the Irish countryside. 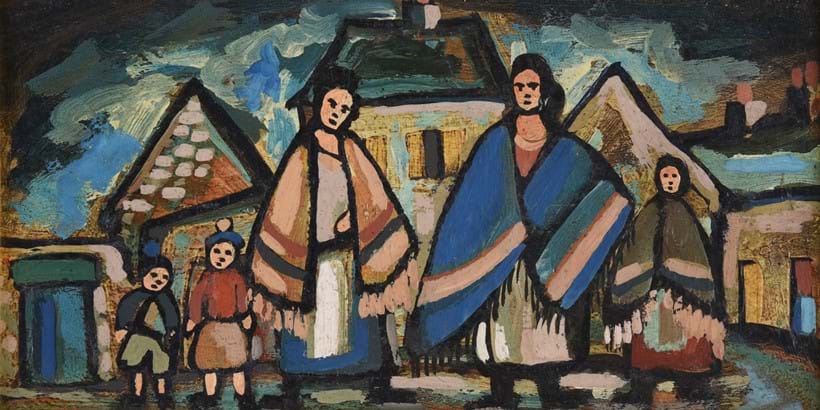 Markey Robinson was born in 1918 in Belfast. Despite his natural talent for the arts being recognised at a young age, Robinson was encouraged to become a welder. Whilst he would spend any spare cash he could on art materials, Robinson was also a talented featherweight boxer. In the 1940s Markey exhibited at the Irish Living Art Exhibition in Dublin which became an important platform for contemporary artists including Jack B. Yeats, Mainie Jellet and Louis le Brocquy. It is likely that Robinson was acquainted with Gerard Dillon and Colin Middleton through these yearly exhibitions. 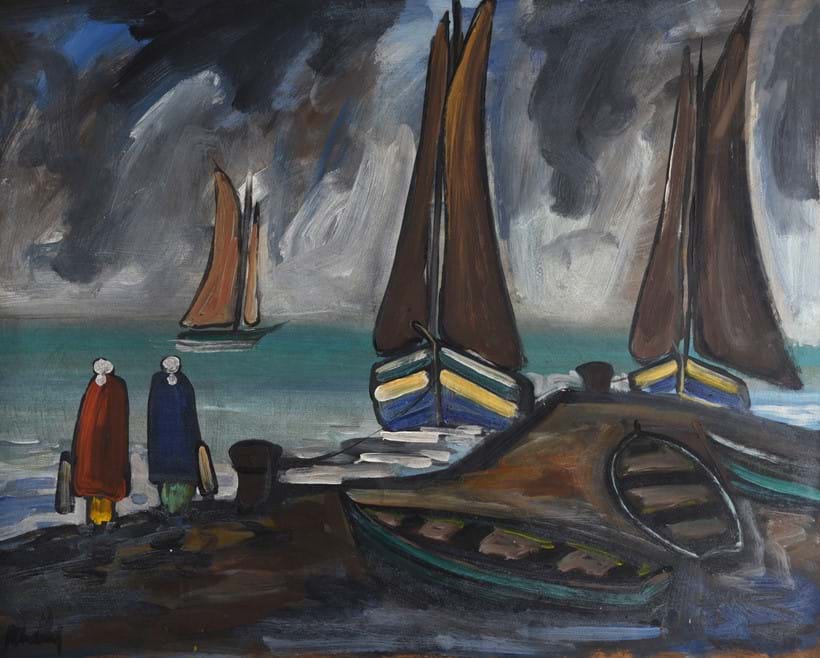 A group of works by contemporary artist Martin Finnin are also featured in the collection. These playful and vibrant pieces are very endearing as little faces peer through the canvas. 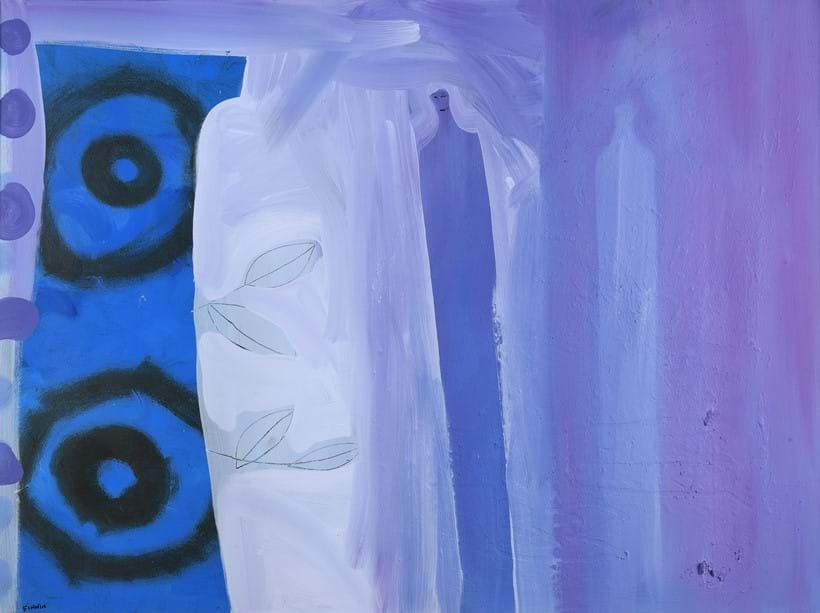 Finnin works with bold shapes, juxtaposed against multi-coloured backgrounds together with contemplative titles such as Lot 21, ‘My Head is Out to Get Me’ and Lot 24, ‘The Recluse Hiding Behind the Trees’. 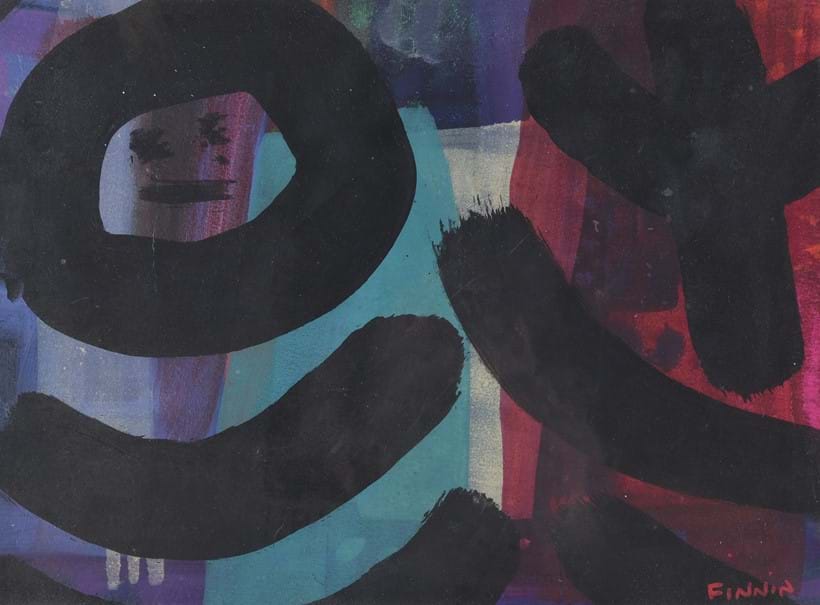