Previewing: A Fine Collection of Meiji Bronzes | from Japanese Works of Art, 13 November

This November Dreweatts offers a unique collection of bronzes from the Meiji era. Comprising over 70 lots, estimates start at £300 and go up to £8,000. The collection was assembled over the last two decades and mostly comprises decorative pieces, many of which bear designs inspired by motifs from the natural world, as well as items for use in the home.

This large bronze figure depicts Ninomiya Kinjiro, who was born into a poor farming family in 1787. Kinjiro was self-taught, he rose into the Samurai class and eventually became a wealthy and influential figure. His life’s journey became associated with the qualities of thrift and diligence and with the introduction of state education in 1872 he was adopted as a model for school children, with his statue present in many elementary schools. This version of Kinjiro wears a short robe and waraji sandals. 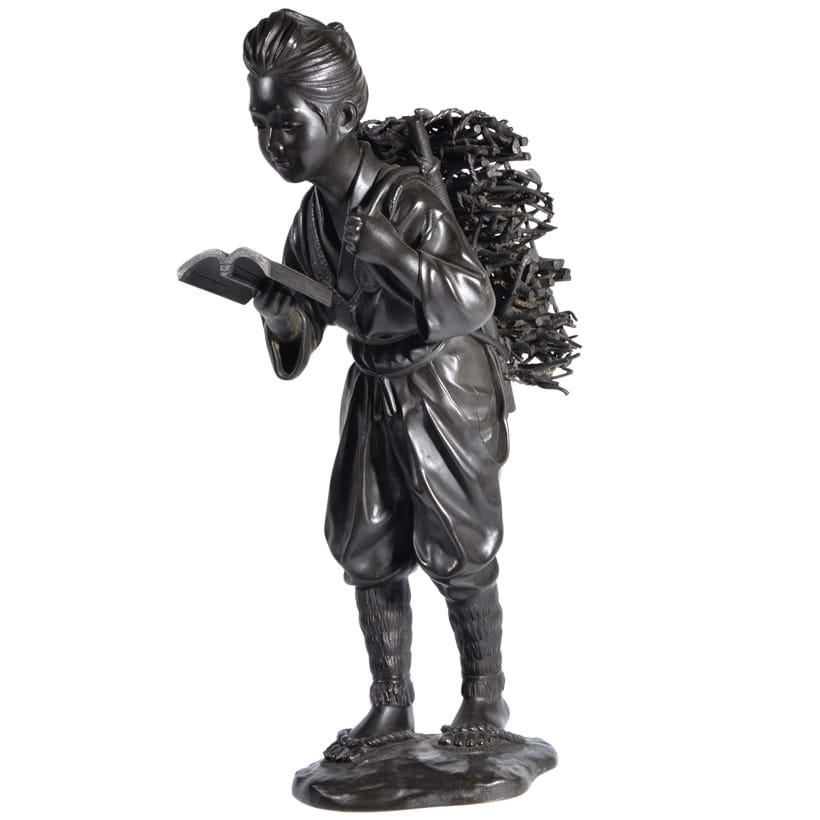 This impressive pair of parcel gilt bronze vases bear the signature of Miya-O sei dzo, the Miyao Company of Yokohama, a prolific producer of medium to large-scale patinated and gilded bronze ornamental objects. The vases, with a globular body, are applied with bamboo stems and leaf handles and decorated with fans and shaped panels depicting kacho-e subjects (bird and flowers) in relief, copper and gilding. 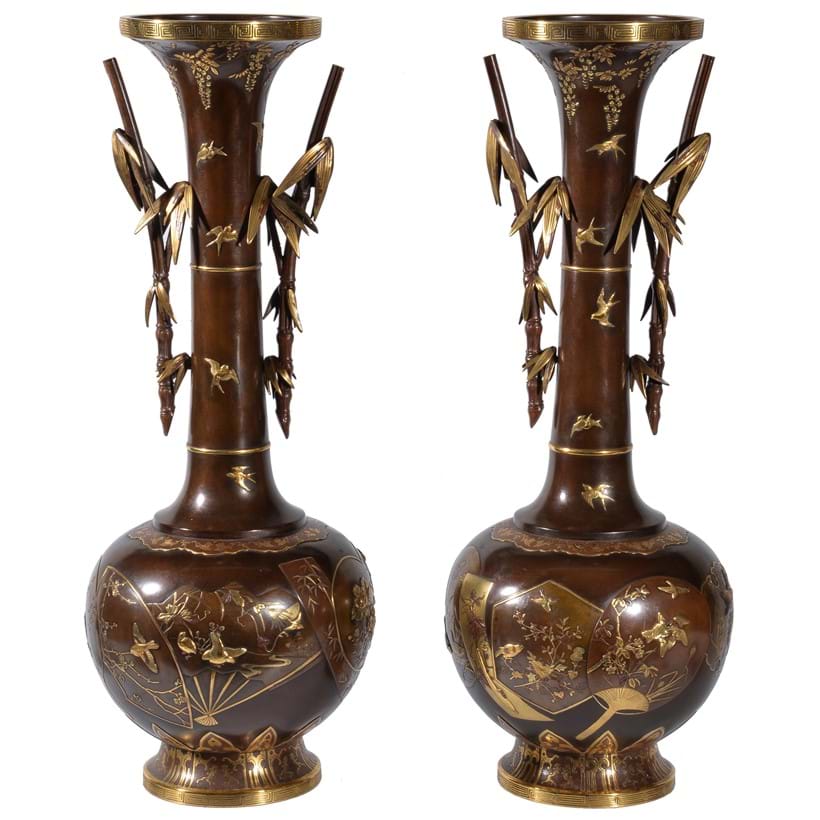 This large red-bronze dish is decorated in shakudo (an alloy of copper and gold), gold, silver and shibuichi taka-zogan and hon-zogan, with two crows in the branches of a cherry tree, beneath a cloud-shrouded full moon.

Prior to the Meiji era shibuichi, a copper alloy, was mostly used to ornament various fittings for swords. Zogan is a term for inlay craft which takes different forms depending on the material used, with taka- and hon-zogan respectively an inlay of high relief form and an inlay created by filling in grooves with wire or sheet metal. 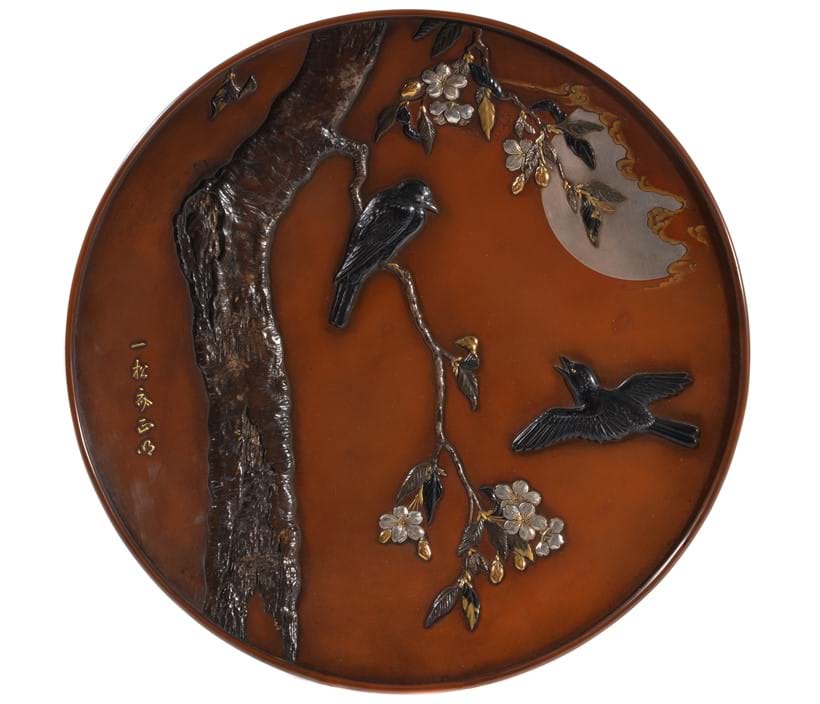 Shakudo, along with gold, also features in the eyes of this fine figure of a Manchurian crane. The crane’s plumage is exceptionally well cast and realistic. His stance is downcast as a snake menacingly entwines itself around his left leg. 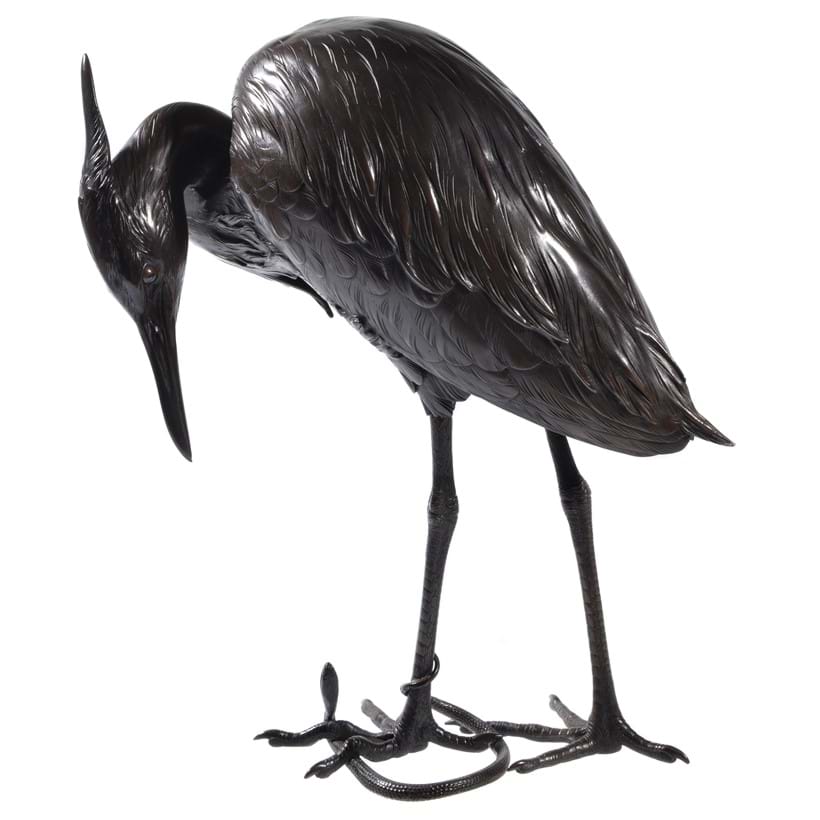 This parcel gilt bronze figure of an archer is in the style of Miya-O, and is signed to the back 'Masamitsu'. The archer is depicted on his right knee with his left leg thrust forward, in a show of strength and prowess with his bow. He wears an eboshi, a black lacquer hat, (also worn by gyogi, or referees, in sumo wrestlling matches), and a loose robe over his armour. 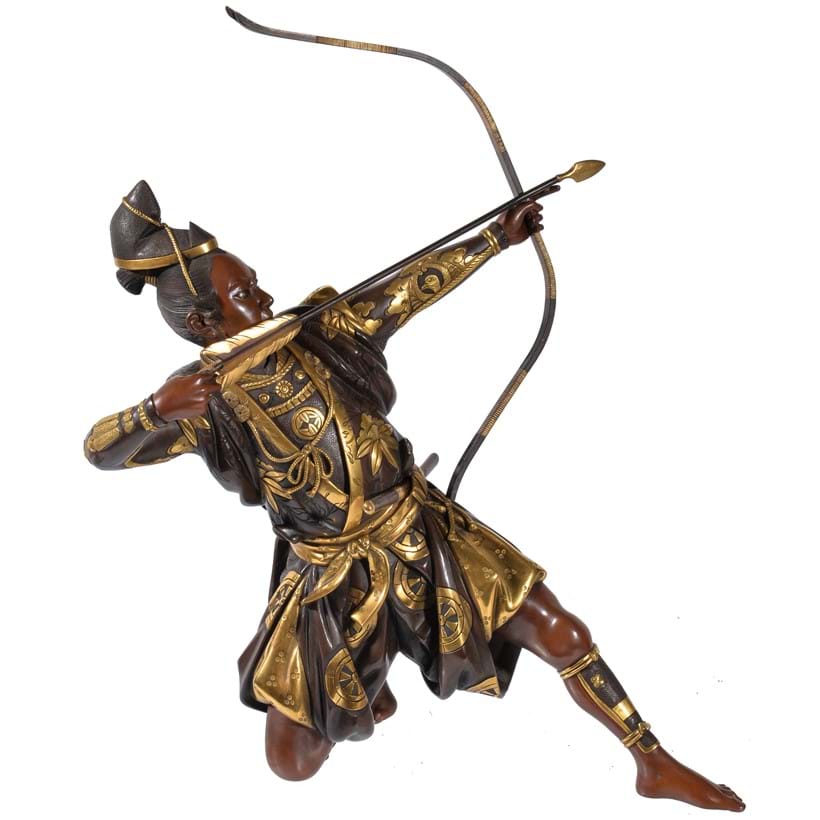 This stunning damascened iron box bears a central seal 'Kyoto Okuno', designating the maker as the Okuno Company of Kyoto. It is decorated using the technique of nunome, whereby fine gold and silver are inlaid into metal. The circular form of the box is raised on bracket feet with cherry blossom to the cover, which depicts a number of notable temples for which the Kyoto region is famous. 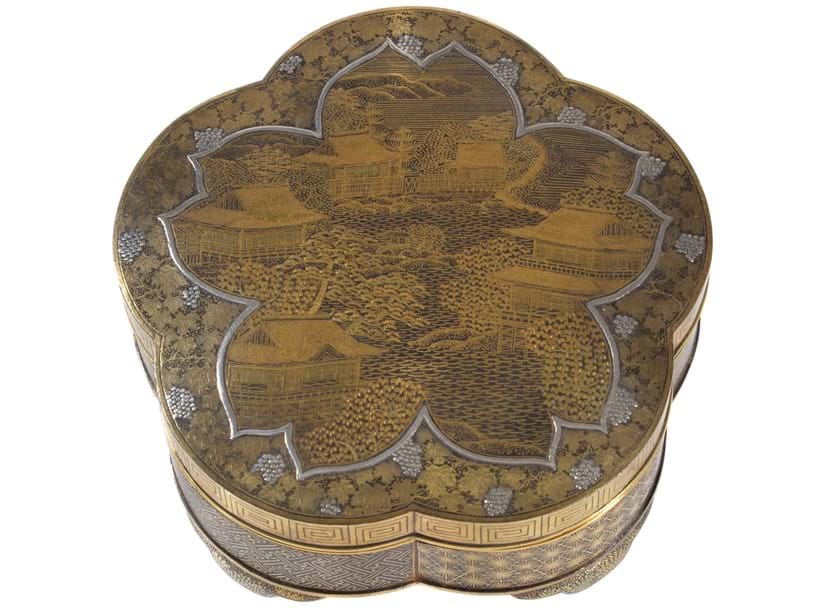