Taking place on 2 March, we have our auction of Fine Clocks, Barometers and Scientific Instruments. Comprising 258 lots, the auction offers a broad selection of items from across all disciplines, including some great rarities, as well as an extensive collection of almost forty fine French carriage clocks. Here we take a look at some of the highlights from the selection of carriage clocks.

Lot 209 was made in the late 19th century by Gay, Lamaille and Company in Paris, for retail by Hardy Brothers in Sydney. Gay, Lamaille and Company are best known for their patent of the 'Surety Roller', a mechanism which prevents the strike star wheel from accidentally jumping out-of-sync whilst the clock is being transported, a nice feature which is present with the present clock.

Hardy Brothers were founded in 1853 and are one of Sydney's premier jewellers and retailers of luxury goods and watches. They have also served and held Royal Warrants for all Monarchs since King George V. 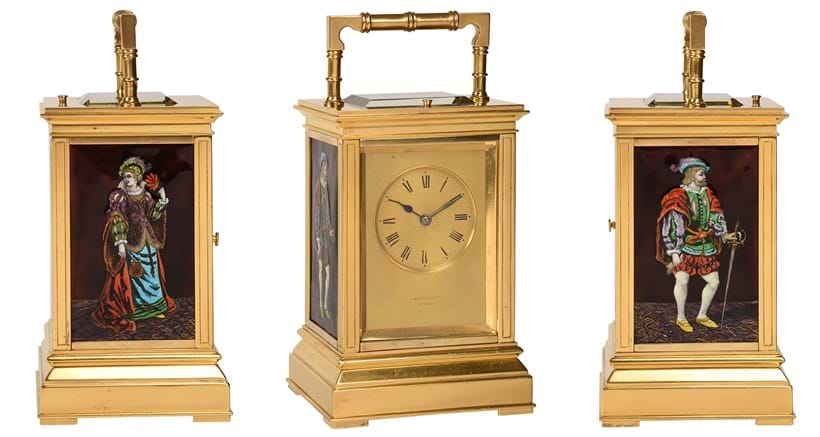 The second example, Lot 210, was made circa 1880, by Achille Brocot of Paris. The Museums Victoria (Australia) website notes that Achille patented several improvements in clock mechanism escapements, and invented the 'Brocot Suspension', an adjustable pendulum spring which enabled time keeping to be regulated by altering the length of the pendulum suspension spring by a key turned in the dial. 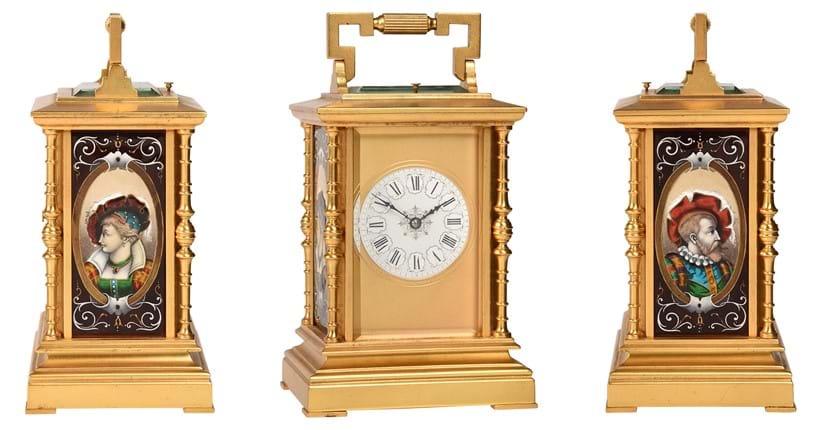 The exquisite side panels of these lots are textbook examples of the finest enamel-work produced in the Limoges workshops during the second half of the 19th century. The Renaissance subject matter along with the colour palette (in particular the dark ground) revives the style for which the region became particularly well-known for during the 16th century. Indeed the popularity and re-establishment of the Limoges enamel workshops during the second half of the 19th century was born out of a deep appreciation for the Renaissance originals which had become highly prized by connoisseurs earlier in the century. As often the case with French revivalist art the intention was to match (or even if possible exceed) the quality of the originals hence there was generally a 'no expense spared' approach to execution in order to achieve this objective.

The panels of the current lots, carefully and cleverly employ a mixture of opaque and translucent enamels to create depth, texture and lustre which varies under different lighting conditions. Some areas in particular, such as the areas representing silk within the garments of the figures, use the finished ground of the metal plate to great effect by allowing reflected to pass through vibrant pigmented transparent enamel surface layers.

A rare five-minute repeater in a Champleve enamel case

We then have Lot 178, a rare five-minute repeating alarm carriage clock in a champlevé enamel case. This was retailed by Ovington Brothers of Brooklyn in the late 19th century. Ovington Brothers were primarily retailers of fine quality ceramics.

This fine French clock is designed with blue ground enamelled panel infills, and beautifully decorated with a dragon and foliate motif. 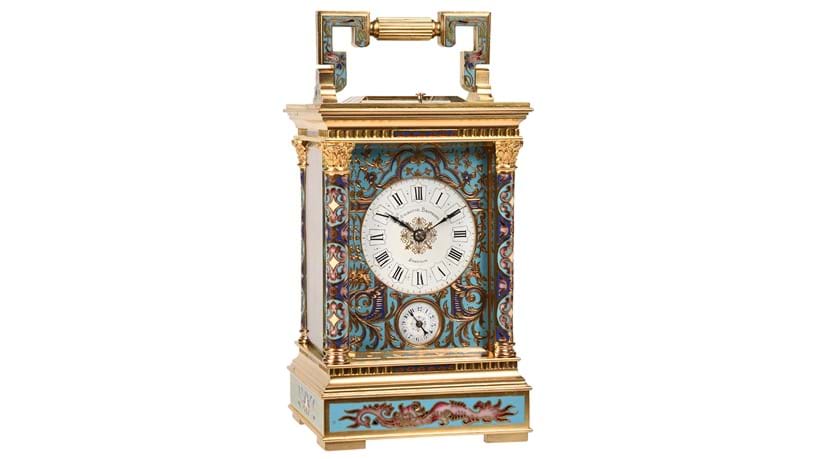 Finally, we wanted to share this very unusual example modelled as a fairytale castle. Lot 211 is a fine and rare French multicoloured 'Castle' carriage clock. It was probably made by Jules Brunelot of Paris, for retail by Collins in Brighton, circa 1885.

The romanticised Gothic castle design of the case of the current lot is both particularly rare and pleasing. The multicolour finish of the case with differing details picked-out in silver, copper and graphite (in addition to the gilding) adds to the strong visual qualities of the case, as do the porcelain panels with their post Medieval genre scenes. 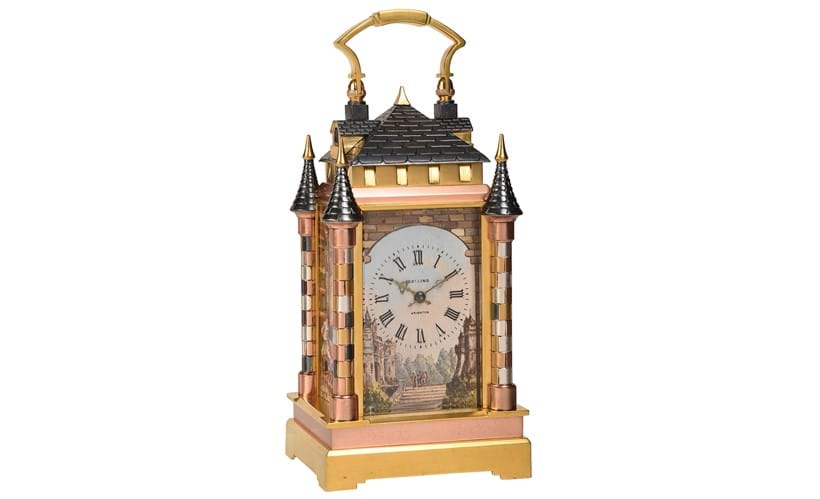