Dreweatts’ recent sale of Fine Art featured a plethora of works from all periods and traditions in a range of different media from Old Master prints and works on paper to oils on canvas and contemporary editions.

The sale also included a group of Old Master and traditional prints from the collection of the late Roger Bruno Higgins, compiled over several decades with the help of specialist old master print dealers Craddock & Barnard, Christopher Mendez and Elizabeth Harvey-Lee. 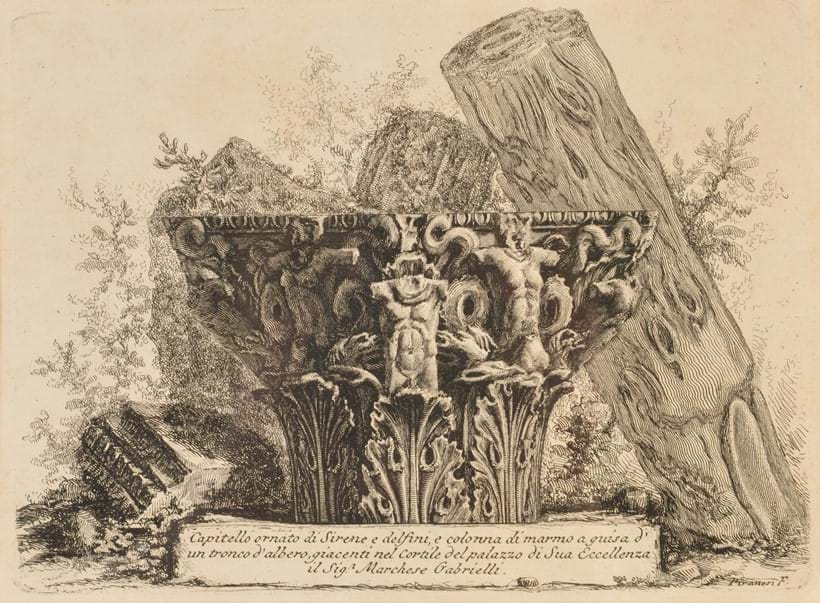 This Florentine School work dates from the early sixteenth century, and at this time the most important artists of the School, notably Raphael and Michelangelo, were working in Rome where the largest commissions were to be found. This was partly due to the influence of the powerful Medici family whose members dominated secular and religious life in the city.

The Annunciation is one of the most popular subjects in Christian art, with depictions going back to early Christianity in the 4th century. The scene has been captured by Sandro Botticelli, Leonardo da Vinci, Caravaggio, Duccio di Buoninsegna, Jan van Eyck, Murillo and many, many other artists.

The composition of The Annunciation is very consistent, with Gabriel, normally standing on the left, (although in this work he is kneeling), facing the Virgin, who is generally seated or kneeling, at least in later depictions. The Virgin is usually shown indoors, as here, and typically Gabriel is shown outside and in Renaissance versions often in a garden. The green foreground in this work would suggest that Gabriel has been portrayed in such an exterior space. 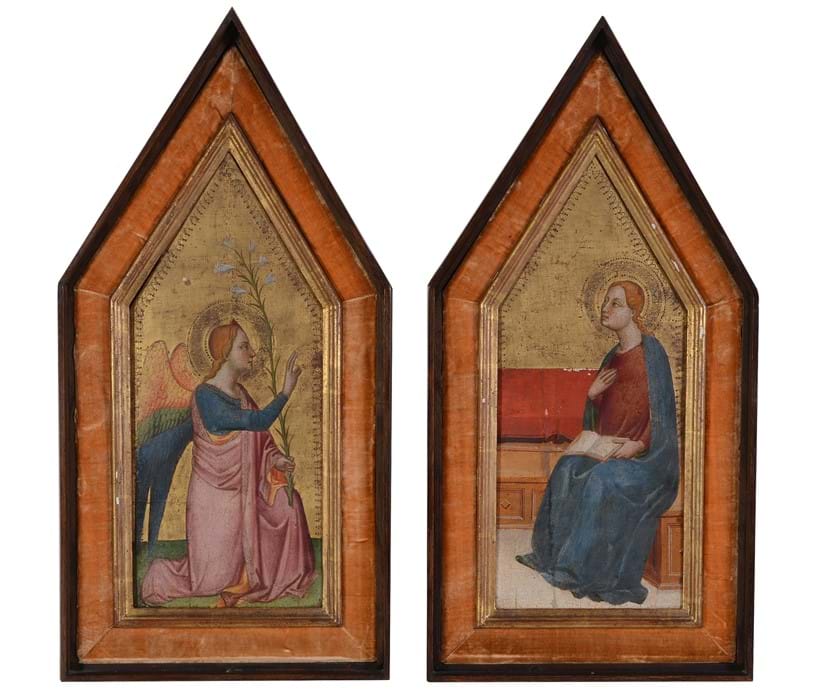 In full the title of this work is: Portrait of Emmanuel, Prince de Rohan, Grand Master of the Order of Saint John of Jerusalem, of Rhodes and of Malta, the Bishop of Malta, the Grand Prior of Saint John’s Church, the Grand Marshall and Chaplain of the Order, pages of honour and the Chaplain’s assistant; it was offered along with an second oil on canvas titled: Portrait of ladies of the Knights of Malta.

Antoine de Favray was renowned for his portraits of the Grand Masters of the Sovereign Military Order of Malta. He lived on the island from 1744 for most of his life, with the exception of a nine year gap (1762-1771) which was spent in Constantinople where he painted numerous genre scenes of everyday life in Turkey under Louis XVI, and also depicted locals as well as foreign dignitaries.

Favray dominated the arts scene in Malta of the time and the possibility of on-going patronage was undoubtedly a major factor which kept him working there. He painted at least two portraits of Pope Benedict XIV, made after originals, as well as one of King Charles II of Spain on horseback. Other than portraiture he also produced a number of significant religious works, landscapes and history paintings.

Of interest to the local home-counties area was a particularly fine example of the work of William Turner of Oxford (1789-1862).

Turner was a contemporary of his more famous namesake, J.M.W. Turner. He spent most of his life in the Oxfordshire region with the exception of three years in London between 1807-10 where he met John Varley and exhibited at the Royal Academy.

The watercolour in the July sale depicted Whiteleaf Cross which is a cross-shaped chalk hill carving on Whiteleaf Hill near Princes Risborough. 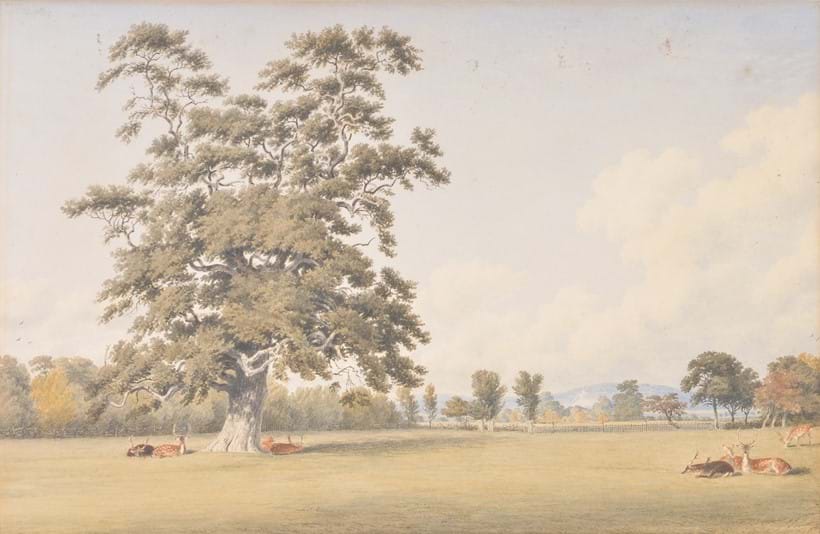 Anton Schranz specialised in painting and engraving landscapes and seascapes, notably of Valetta in Malta. He lived most of his life in Minorca, where he produced similar compositions of Port Mahon, before moving to Malta in 1817. There he found patronage amongst British naval officers who bought his works as topographical souvenirs.

Caledonia was in Mahon in August 1837. Although Schranz had moved to Malta by this time it is possible that this pair of oils on canvas were painted in Malta. Caledonia had regularly been in Malta since 1834 suggesting it more than likely that the artist would have seen the ship firsthand. In addition, Schranz would have had a number of sketches and images of Mahon harbour from his time living there which he could have used for the background harbour composition. 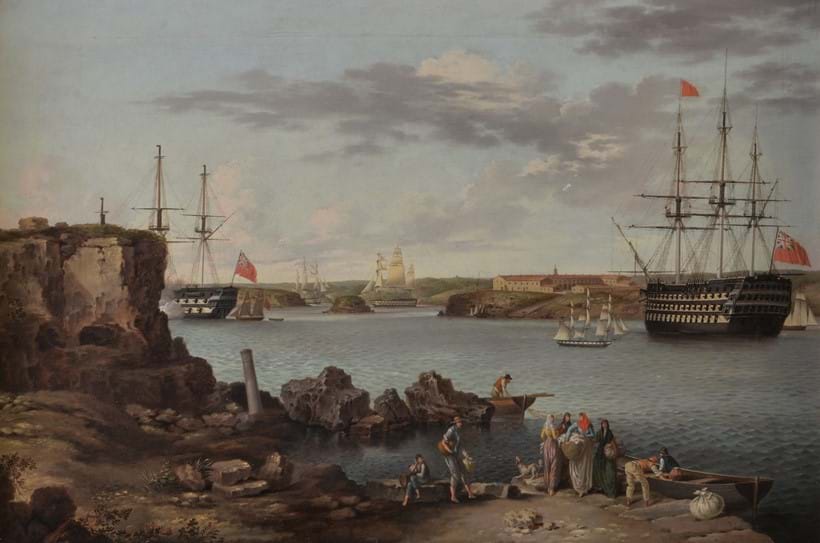 HMS Caledonia was a 120-gun first-rate ship of the line of the Royal Navy. She was launched on 25 June 1808 at Plynouth and was Admiral Pellews’ flagship in the Mediterranean. Caledonia entered service as the largest and most heavily armed vessel of the time. She proved to be a very successful and it was said that ‘This fine three-decker rides easy at her anchors, carries her lee ports well, rolls and pitches quite easy, generally carries her helm half a turn a-weather, steers, works and stays remarkably well, is a weatherly ship, and lies-to very close.’ In later years she was to become the standard design for British three-deckers.

On 12 February 1814 she took part with HMS Boyne in action against the French ship of the line Romulus off Toulon and later in 1831 she was part of the Experimental Squadron of the Channel Fleet under Sir Edward Codrington. On 12 September that year she took part in an experiment whereby she was towed by the frigate HMS Galatea by means of hand-worked paddles alone.

In 1856 Caledonia was converted to a hospital ship and renamed Dreadnought, becoming the second floating Dreadnought Seamens Hospital at Greenwich where she remained until 1870. She was broken up in 1875. 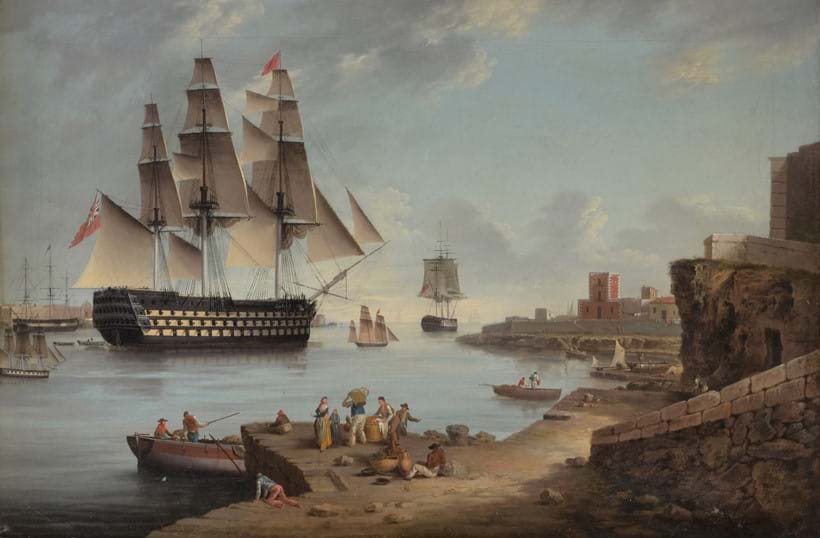 From the twentieth century, this painting by Edward Seago (1910-1974) is typical of his work and he continues to be enduringly popular.

His easy post-impressionist style as seen in this work is the best form of escapism from the often dreary mundanity of the everyday, transporting the viewer to the sparkling shores of the Mediterranean or, in this case, Pineche, Portugal, with the use of a bright, translucent palette.

Mary Fedden was born in Bristol, from a young age she wanted to be a painter and on leaving school at sixteen she studied at the Slade School of Art in London (1932-1936) under the theatre designer Vladimir Polunin who had worked with the Ballets Russes. She painted sets for professional performances at Sadlers Wells, but decided against stage design as a career. Instead, Fedden returned to Bristol where she taught art and painted portraits. She was called up during World War II and served abroad as a driver for the Navy, Army and Air Force Institutes (NAAFI).

In 1946 Fedden resumed easel painting and held her first exhibition at the Mansard Gallery, located in Heal’s department store in 1947, showing a number of still life and flower paintings. From 1949 she was based at Durham Wharf, on the Thames at Chiswick, and here she worked for the rest of her life.

Still life compositions accounted for the bulk of her output, and her style carried somewhat the mark of John Minton, although anglicised and softened for a more temperate climate.

Fedden had a long and extremely productive career and she painted prolifically from 1946 with regular exhibitions at the Redfern Gallery, the New Grafton Gallery and many other galleries throughout Britain. From the late 1950s she taught painting at the Royal College of Art and in 1992 she was elected to the Royal Academy. 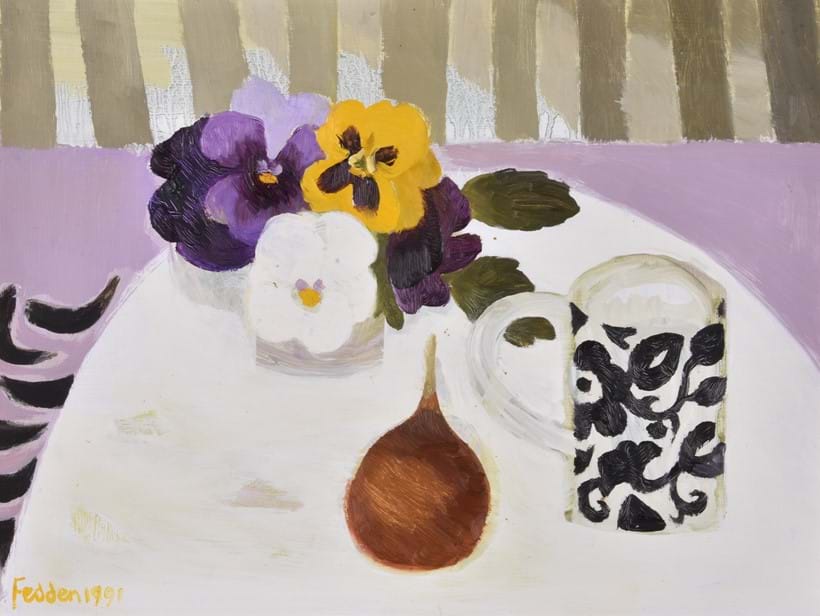