The forthcoming auction, on 5 September, features 160 lots of furniture, carpets, mirrors and chandeliers from the 17th through to the 20th century and in a wide range of superb materials.

Fine furniture runs from the grandest of library bookcases to the most delicate of ‘butterfly’ tables by English and European makers. Carpets hail from the workshops of Agra, Tabriz, Heriz, Tetex, amongst others, all of which would make the perfect finishing touch to an interior space.

Spectacular mirrors date from the William & Mary, Georgian and Regency eras, as well as examples from the Continent.

Lot 82, a George III mahogany armchair, circa 1770, (est. £2,000-3,000 + fees) is of Gainsborough type - the arched back above scroll arms, the rectangular seat above four blind fretwork decorated square section legs and stretchers pierced with lozenge motifs.

The period 1760-1820 is regarded as the golden age of classical English furniture design. Although at the time Royal patronage was still very important increasing numbers of the aristocracy and fashionable classes were building mansions and townhouses which needed furnishing. The greatest and best known names in furniture design flourished at this time.

Mahogany is prized for its durability, beauty and colour. Until the 1760s over 90% of the mahogany imported into Britain came from Jamaica, some was re-exported to Europe, but, most was used by British furniture makers. 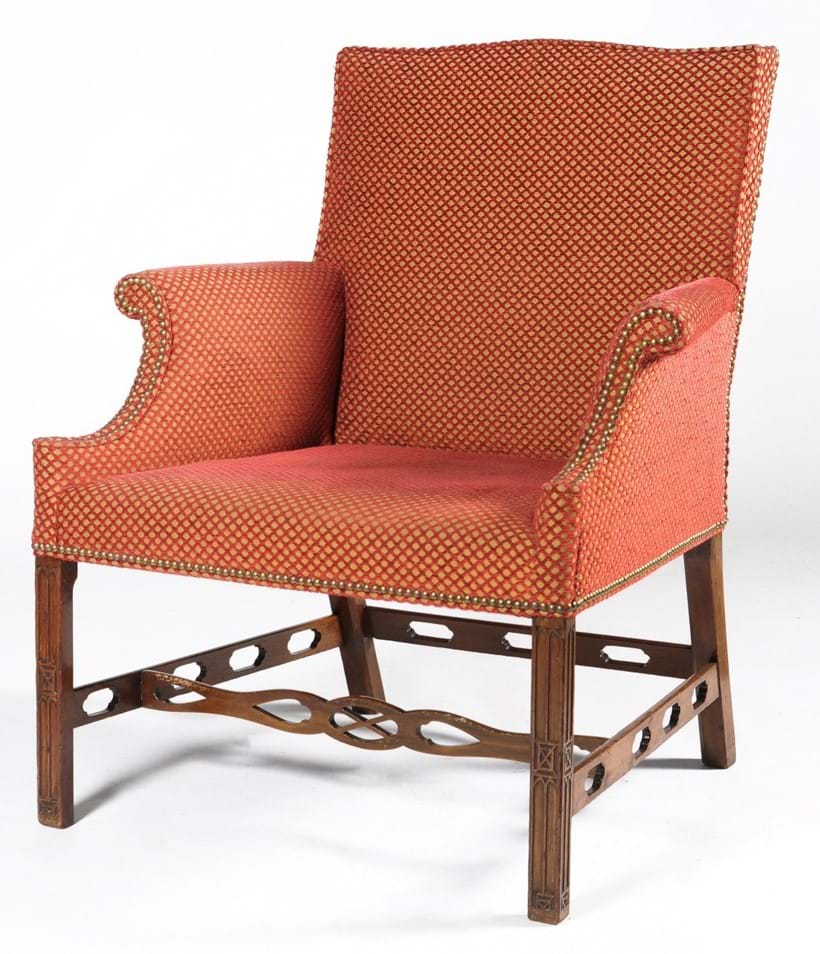 Pembroke tables were highly fashionable in the late 18th century, and they were first seen in the 1760s; by 1778 the name had entered the New English Dictionary. Thomas Sheraton identifies the Countess of Pembroke as having given ‘the first idea of such a table to the workmen’.

In the manner of Ince & Mayhew

Lot 89, a George III giltwood wall mirror, (est. £2,000-3,000 + fees), circa 1780, is in the manner of Ince & Mayhew. Its elaborately carved frame features C-scrolls, foliate and floral motifs, surmounted by a whimsical male term in Chinoiserie taste. A mirror of similar design features in Ince & Mayhew, Universal System of Household Furniture (1762), although it is missing the Chinoiserie bust terminal.

William Ince and John Mayhew were in business from 1759 – 1803. They provided furniture for a number of Robert Adam’s patrons, and were among the first London furniture makers to exploit marquetry decoration when it came back into fashion in the 1760s. Their volume of engraved designs, Universal System, was dedicated to the Duke of Marlborough, and was in imitation of Thomas Chippendale’s The Gentleman and Cabinet Maker’s Director, (1754). 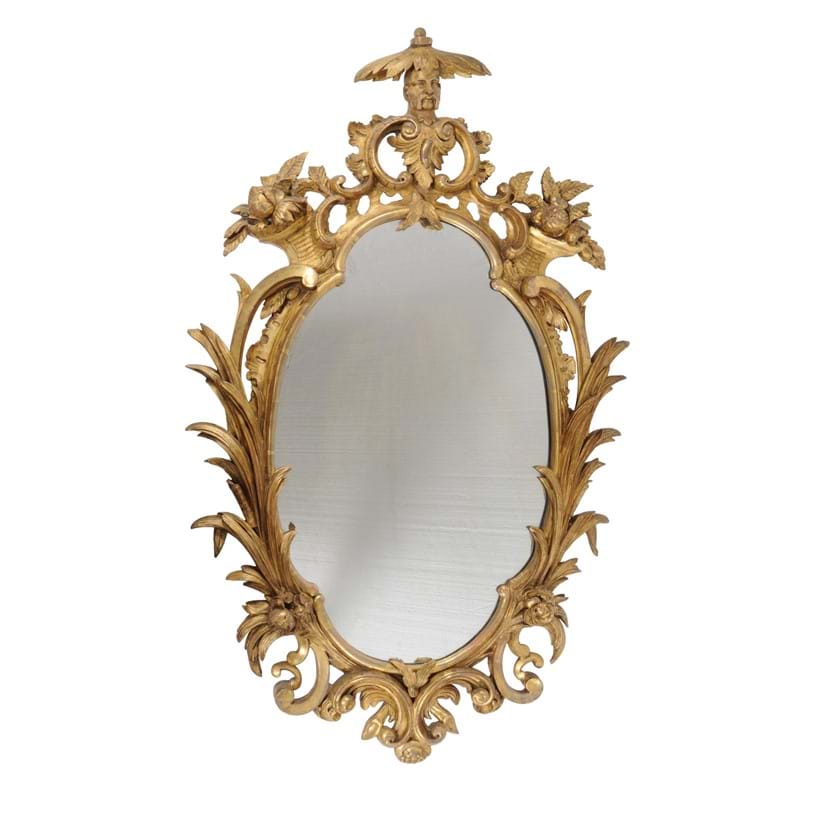 This George III rent table, circa 1790, (est. £1,500-2,000 + fees) is so named as it functioned in the 18th century as a repository for rent money and papers pertaining to a landlord’s estate. This impressive, capacious oval table in satinwood features both lockable drawers and open shelves and would be as useful in the 21st century.

Satinwood is of a golden yellow hue, of medium to high density, fine textured and has a bright natural lustre. Certain elements of the 18th century table are ebonised, a technique whereby the satinwood is darkened to look like ebony. 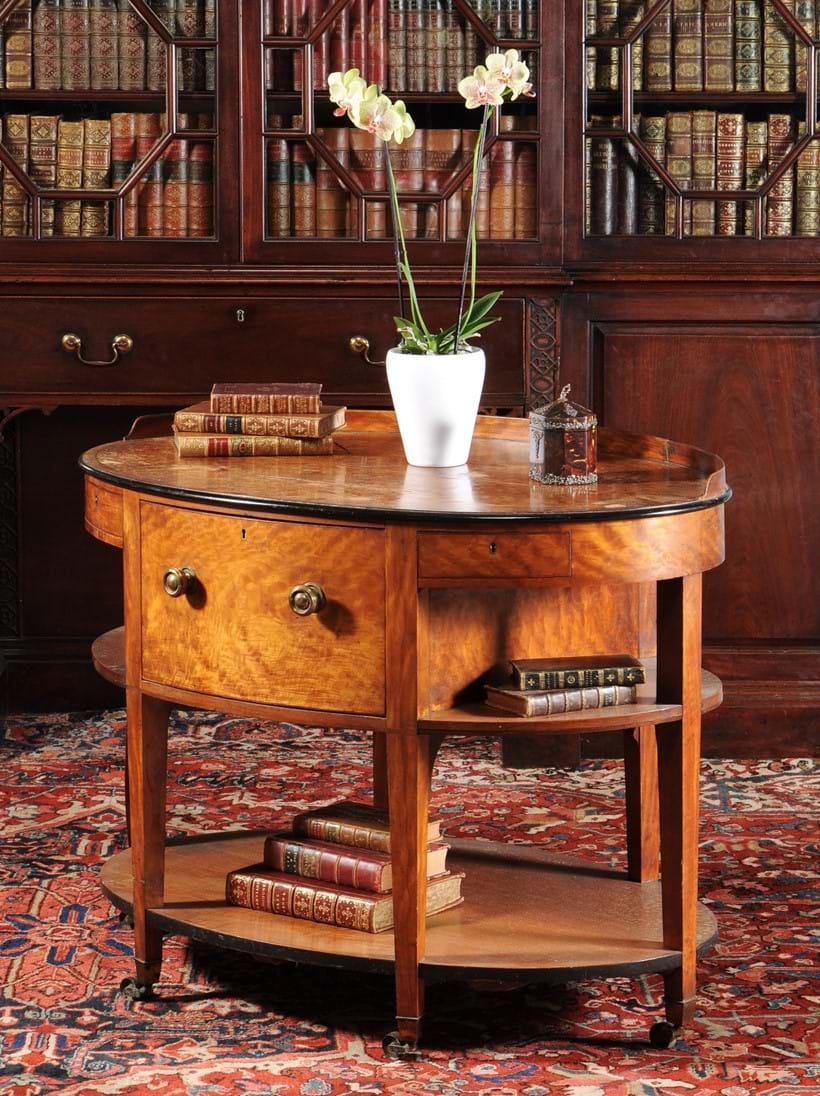 During the 1920s and 30s Persian and Caucasian carpets were so popular that weavers in these regions could not keep pace with orders from Western merchants. Germany and Austria stepped up to the mark and soon they were producing high quality hooked carpets to fill the gap, and carpets known as Tetex are from Germany. This example features a densely foliage-decorated polychrome madder field, within a navy border. 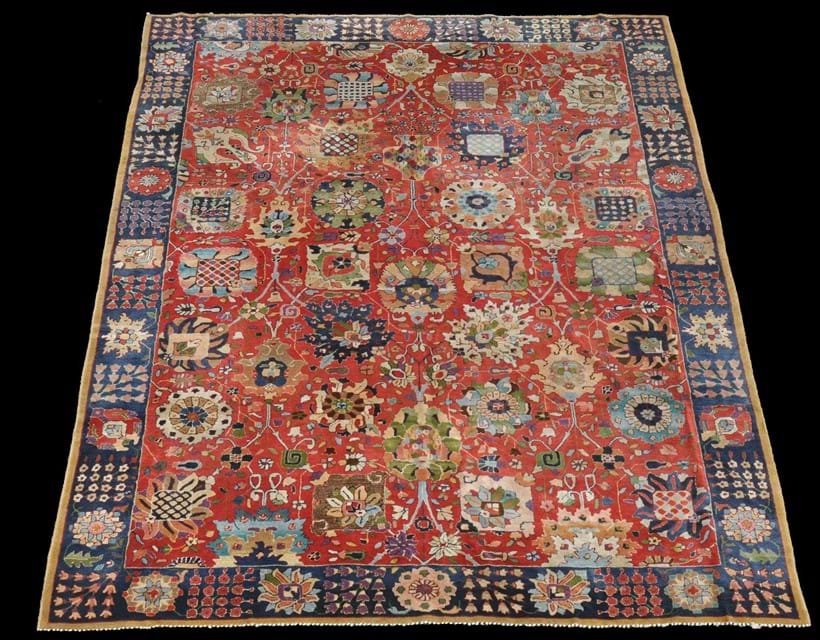 This group shot features lot 3, a William & Mary kingwood and oyster veneered keyhole desk and situated on the wall behind is lot 9, a George I giltwood and gesso girandole wall mirror, circa 1720, (est. £2,000-3,000 + fees). This beautiful mirror would provide an eye-catching focus. The bevelled rectangular plate sits within a foliate decorated and moulded border. The apron section is centred by a shell and flanked by twin gilt brass scrolling candle arms – a visual reminder that at this time candle light reflected in a mirror would provide an important source of illumination, realised within a highly decorative item. The French term girandole, indicates a lighting device, and this mirror is so titled given its candle holders. 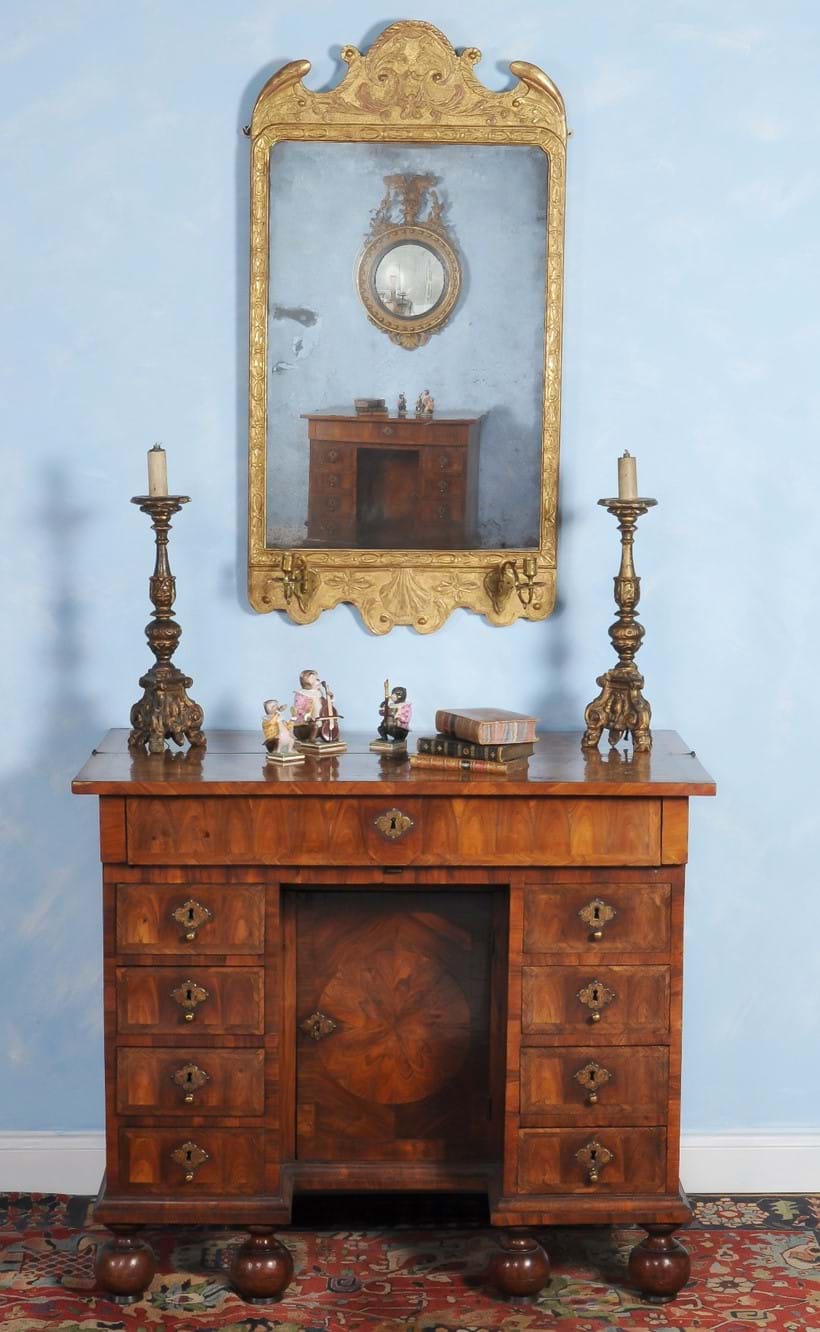