Ahead of our Western Manuscripts and Miniatures auction on Tuesday 3 December, Dr Timothy Bolton, chooses a highlight from the sale.

This small booklet of only 12 leaves of paper (lot 75), is most probably the late medieval equivalent of a ‘breaking news’ newsfeed announcing one of the most climactic events in the history of medieval Europe – the fall of Constantinople and Byzantium to the Ottoman Turks. 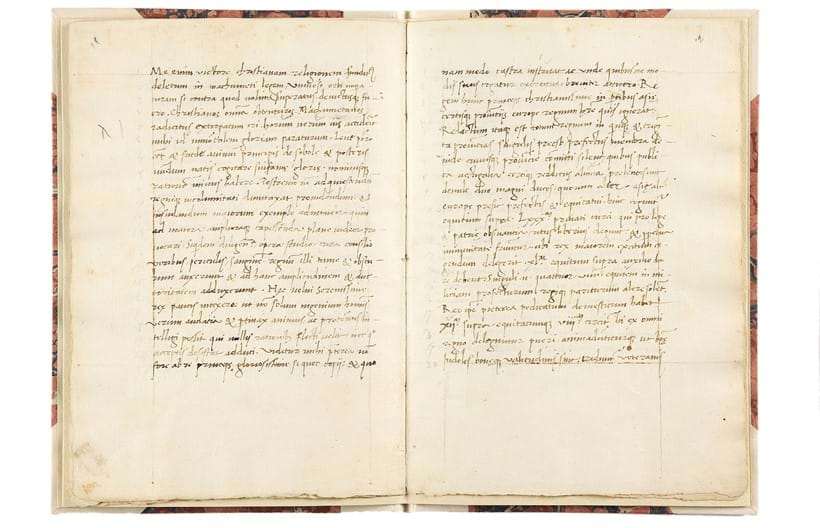 Lot 75: Niccolo Sagundino, Ad serenissimum principem, an eyewitness account of the Fall of Constantinople and its seizure by the Ottoman Empire, in Latin, humanist manuscript on paper [Italy (perhaps Naples), mid fifteenth century (most probably soon after 1453)] | Est. £8,000-12,000 (+ fees)

It contains a copy of the account of Niccolo Sagundino, who was stationed by the Venetian authorities on the island of Negroponte in the 1440s and 1450s, and so he was there on 29 May 1453 when the Ottoman forces overran nearby Constantinople. As the closest of its agents in the region, Venice despatched him to the Sultan and he remained in Constantinople during the entire summer and autumn of that year. His long speech on the state of the imperial city, including one of the very first reports on the Ottoman Empire produced in the West, as well as a detailed verbal portrait of the young emperor, Mohammed II, was delivered on his return to the Venetian court, the Papal Curia and then the Aragonese court in Naples. In Naples it was written down on the orders of King Alfonso 'the Magnificent', and copied and widely distributed from there throughout Europe, informing them of the end of Christian rule in the Eastern Empire.

Among the 34 surviving manuscripts, the present one has a claim to be of crucial importance. The others are all part of larger assemblages of smaller works within a single volume, often copied up, after the fact, as fine reference copies. The paper of the present booklet is certainly Italian and would appear to be of the mid-1450s, and it is the only known copy to survive as a discrete booklet. It may well be one of the original copies sent out from Naples to inform a European prince or bishop of the breaking news.

All other witnesses are in institutional ownership, and no recorded copy appears to have ever been offered before on the open market. Thus, it seems likely that this is the last one that could ever be offered for sale.