Lot 6: Smaragdus of St-Mihiel, Commentary on the Rule of St. Benedict

Lot 6: Smaragdus of St-Mihiel, Commentary on the Rule of St. Benedict

Lot 6 θ: Smaragdus of St-Mihiel, Commentary on the Rule of St. Benedict, in Latin, in Visigothic minuscule, decorated manuscript on parchment
[northern Spain (perhaps Silos), first half of the tenth century]

Near-complete leaf, with remains of two columns of 29 lines (with parts of ch. III:6-10 of text, with occasional scribal errors, apparently involving eye-skip as well as textual misunderstandings), with margins at head and foot and thus no lines lost there from trimming, written in brown ink in a fine and early Visigothic minuscule, rubrics in alternate lines of burgundy-red and normal brown pen, two large initials with penwork compartments infilled with burgundy wash, one initial terminating in a spiky foliate tip, some natural flaws in parchment (these written around by the original scribe), a few erasures, offset in places from another leaf of same, some scrawled numbers on one side from reuse as later binding material, slightly scuffed, a few wormholes, and trimmed on one side (removing outer half of one column), 274 by 150mm.; in cloth-covered card binding

THIS IS AN EXTREMELY EARLY AND IMPORTANT WITNESS TO A KEY CAROLINGIAN TEXT, PRODUCED MOST PROBABLY THROUGH IMPERIAL PRESSURE TO REUNITE WESTERN MONASTICISM BEHIND A CORRECT AND CORRECTLY INTERPRETED COPY OF THE BENEDICTINE RULE; AND IN ADDITION, IT IS IN THE EARLIEST AND MOST VISUALLY APPEALING EXAMPLE OF VISIGOTHIC MINISCULE TO COME TO THE MARKET IN DECADES

Smaragdus (fl. 809-26) was a Benedictine monk and scholar, and one of the handful of authors who helped shape the earliest phases of the Carolingian renaissance. Very little information survives about him. He was once thought to be Irish, but this was questioned by Bernhard Bischoff ('Muridac doctissimus plebis, ein irischer Grammatiker des IX. Jahrhunderts', Celtica, 5, 1960, pp. 40-44). Other scholars followed, noting Smaragdus' use of Visigothic examples in his writing on patronyms (L. Holtz, '(Nouveaux) prolégomènes à l'édition du Liber in partibus Donati de Smaragde de Saint-Mihiel', Bulletin de la Société nationale des antiquaires de France, 1983, pp. 157-170), and his knowledge of obscure Spanish texts such as the Sententiae of Taio of Saragossa (F. Rädle, Studien zu Smaragd, 1974, pp. 75-77). It now seems certain that Smaragdus came from Visigothic Spain, and may have held office as the abbot of Silos. He perhaps fled northwards into the Carolingian Empire ahead of the Islamic advance through Spain in the late eighth century. He appears first in the historical record in the first decade of the ninth century as master of the school of Castillio, a monastery dedicated to St. Michael ('Mihiel') in the diocese of Verdun in southern France.

This is one of the earliest witnesses to the oldest known commentary on the Rule of St. Benedict, allowing us to come into contact with the textual fervour of the Carolingian period as well as Benedict's original sixth-century text. The Benedictine Rule was as much an answer to Charlemagne's scholarly call to arms, as the production of the Tours Bibles. It was the foundation stone of all Western monasticism, and was adopted in 816 at a council called by Emperor Louis the Pious at Aachen, as the rule to be followed in all monasteries throughout the Empire. An eye-witness to this imperial council, Benedict of Aniane, records that the entire text of the rule was discussed there, with debate clarifying obscure or vague passages and removing errors from the text. As L. Traube has noted, it is clear that the scholars of the Carolingian court used a copy made at Charlemagne's request from an old manuscript in use at Montecassino, believing that to be St. Benedict's original (Textgeschichte der "Regula S. Benedicti", 1898). Moreover, St. Gallen, MS. 914 has a letter at its beginning stating that that authorative court copy was its exemplar, and it is likely that Smaragdus used that crucial manuscript as well to produce this text - indeed, in quoting the text of the rule, Smaragdus, often favours the original sixth-century Latin forms over those updated for the ninth century. With this blend of antiquarianism and reestablishment of a correct guide for European monasticism, this text exemplified the Carolingian ideals. Indeed, it may have been commissioned by Louis the Pious himself.

In addition, this leaf and its sister-leaf in Yale are among the very earliest witnesses to the text. A. Spannagel lists fifty-five extant manuscripts, of which only five definitely predate the present example (British Library, Addit. 16961, from Stavelot, late ninth century; Orléans, Bibliothèque municipale 230 (201), from France, mid-ninth century; BnF. lat. 4213, from France, late ninth century; Valenciennes, Bibliotheque municipale 285 (275), from France, late ninth century; John Rylands, MS. lat. 104 (116), from Spain, probably Cardeña, late ninth century; and Silos, Archivo del Monasterio 1 and 5-16, from Spain and probably from the monastery itself, late ninth century + Madrid, Archivio Historico National, Clero. Capeta 1030, num. 24, most probably from the same parent codex) as well as two examples of c. 900 (Paris, BnF. lat. 4212, from France; and Vienna, ÖNB, Ser. nov. 4267), and eight of the tenth century (Berlin, Staatsbibl., theol. lat. fol. 339, from Cologne; Cambridge University Library, Ee.2.4, from England; Poland, Kórnik, Biblioteca Kórnicka, from France; BnF. lat. 4210, France; British Library, Addit. 16961, from Cardeña; Madrid, Biblioteca de la Real Academia, 26, from Spain; Montserrat, Biblioteca del Monestir 793-I, from Spain; and Valvanera, Archivo del Monasterio, s.n., from Spain, dated 954: see Smaragdi Abbatis Expositio in Regulam S. Benedicti, 1974, pp. xv-xx). In fact, a distribution pattern emerges when we look at these witnesses, with an initial ninth-century burst of copying of the text in France, ending in two late ninth-century copies from Spain in the John Rylands and Silos+ Madrid, Archivio Historico National manuscripts. From these two witnesses, the copies of the tenth century proliferate in Spain producing five more in the tenth century, more than any other country. Spannagel did not know of this manuscript or its sister-leaves in Yale, and records no witness to the text outside of institutional ownership.

Examples are rare on the market, and apart from the present leaf, the last to appear are a large leaf from an Acta Sanctorum, written about c. 1080, sold in our rooms, 6 July 2016, lot 4; a leaf from the Pasionario hispánico in a transitional Visigothic minuscule of the eleventh century, sold in our rooms, 6 December 2017, lot 12; and three small strips from a eleventh-century liturgical volume with Vetus Latina readings, sold in the Schøyen sale at Sotheby's, 10 July 2012, lot 22. To these, we might add an eleventh-century charter in transitional Visigothic minuscule offered by Christie's, 20 November 2013, lot 15. None of those had any decoration, and all were significantly later than the present leaf. 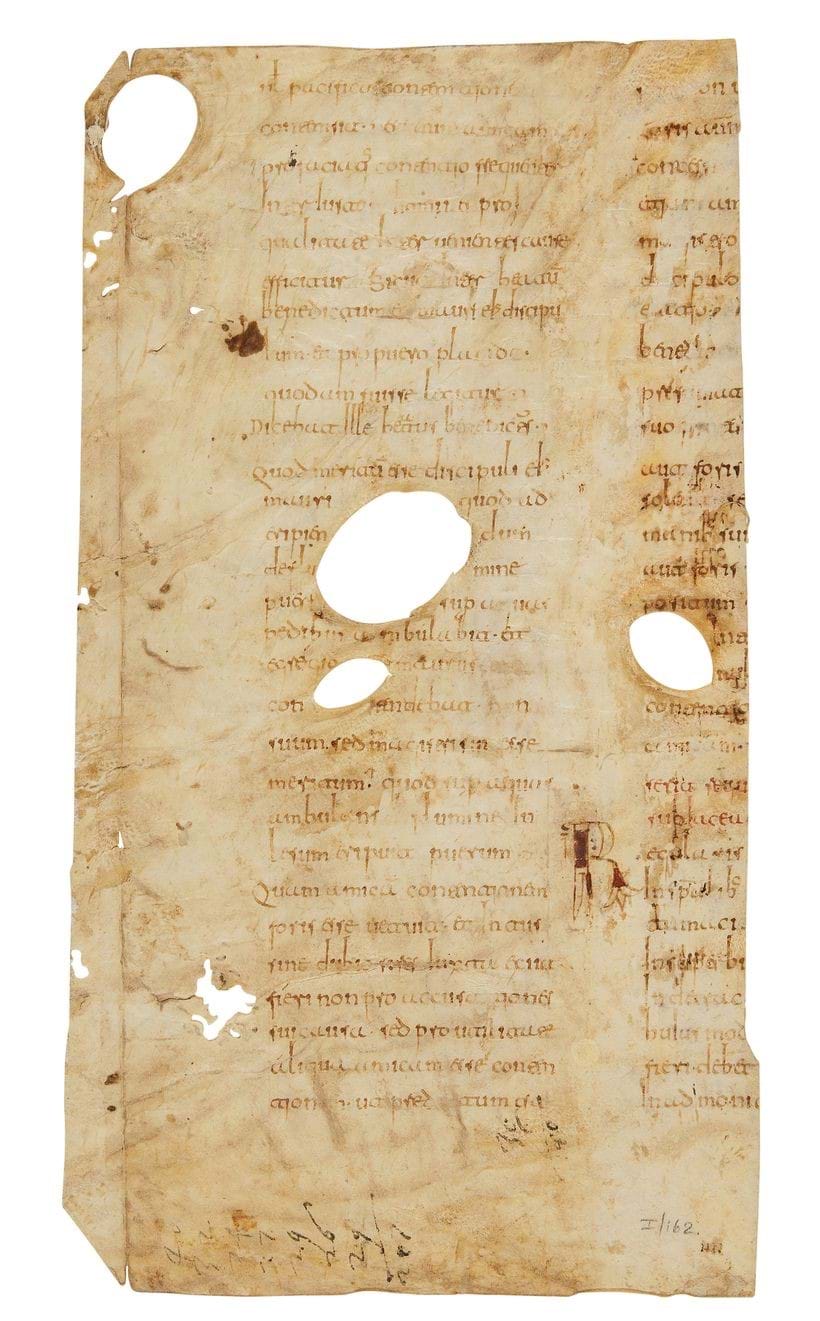 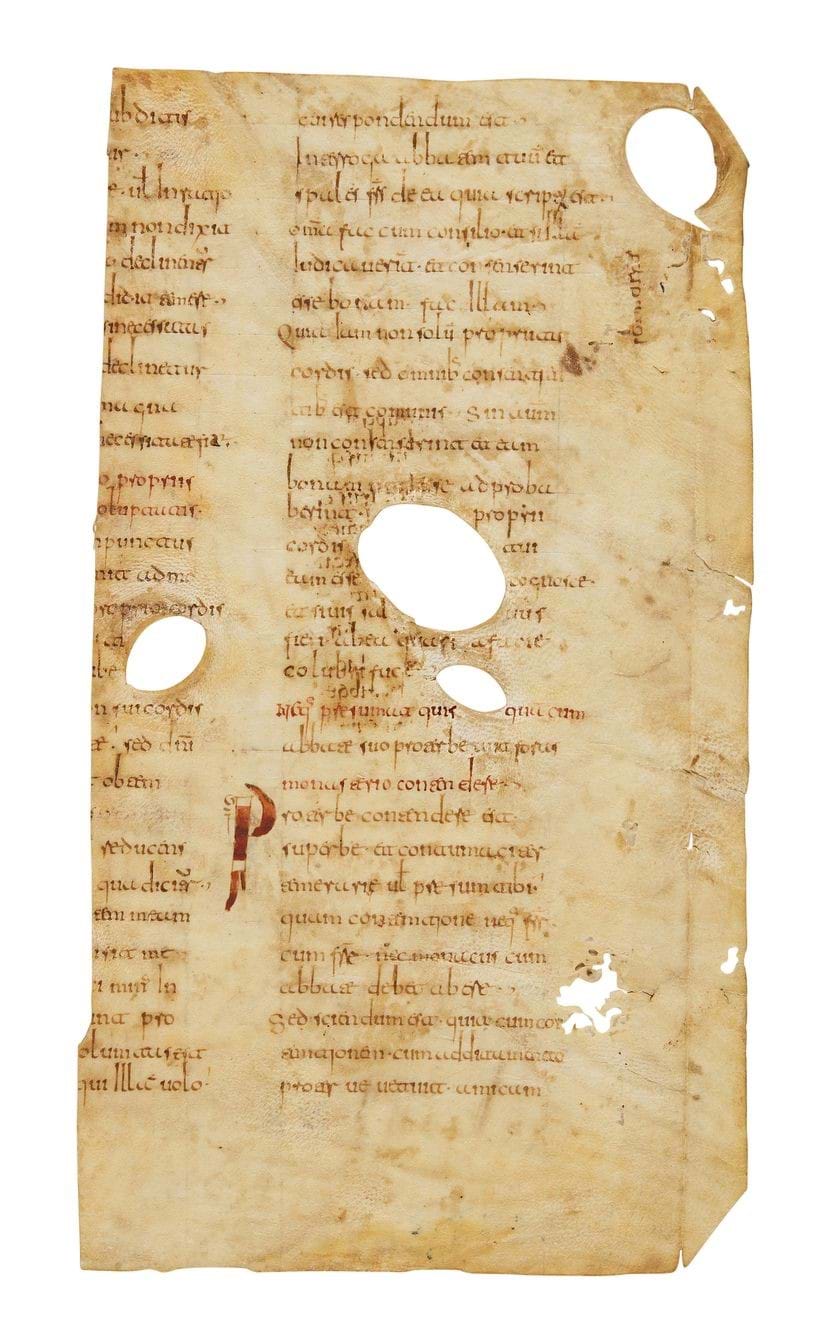