AUTOGRAPH LETTERS TO GEORGIE AND ARTHUR DOBLE, from Sacheverell, Georgia and Reresby Sitwell, 1940-1958.  a group of thirteen Autograph letters. a total of 27pp., 14 leaves, 494 lines, the personal family letters from Sacheverell, Georgia and Reresby Sitwell, written from Weston Hall, Northamptonshire, Renishaw Hall, Derbyshire, Alrae Hotel, New York, and Training Detachment, 7/B Grenadier Guards, Leawood Camp, Devon, twelve letters within original postmarked envelopes, addressed to Mrs. Arthur Doble, 2162, Sherbrooke Street West, Montreal, P.Q, Canada.   comprises:  RERESBY LETTERS: Reresby Sitwell to Arthur Doble, August 14, 1940, Weston Hall.  1pp, single leaf, 19 lines. Reresby, aged 13, writes to his grandfather with his news from Weston Hall during wartime, 'Dear Gong-gong', I hope you are well and alright after that nightmare journey . . .What it must be like for those poor wretches that couldn't get away in time . . .  There are planes overhead the whole time, and we have heard several nights what we thought were Nazi bombers . . .' Reresby writes of a friend, Bernard, who was unfortunately called up the day before Reresby came back from Eton, 'He says his regiment were completely wiped out at Dunkirk and are therefore all new . . . Best Love Reresby  . . . PS. . . write soon and tell me all your adventures';  Reresby Sitwell to Georgie Doble, November 14, 1941, Weston Hall.  2pp., single leaf, 36 lines.  Rerseby writes to his grandmother thanking her for her sweet letter and cheque, which he will spend on savings certificates and Christmas presents. He has been sent back from Eton with one of his colds which he suffers from for nine or ten months of the year. Reresby informs Georgie '. . . the reason I get them (colds) so often is partly because I am growing three to four inches a year at the moment . . .   ' ;  Reresby Sitwell to Georgie Doble, August 27, 1942, Weston Hall.  4pp., 2 leaves, 90 lines. 'Darling Granny Do, Thank you a million times for the lovely things which I found in poor darling Gong-gong's trunk . . . ' Reresby updates Georgie on the events of a recent family holiday to Scotland, stalking Red deer in the mountains and horse riding everyday, . . . 'Mummy was furious when she saw that Daddy could ride perfectly well, when considering all the brilliant opportunities they had of riding in the past . . .the journey back was rather hectic . . . the corridors (of the train) were packed with soldiers, Daddy tripped over a prostrate colonel in the passage . . . ' ;  Reresby Sitwell to Georgie Doble, January 19, 1944, Weston Hall.  2pp., single leaf, 38 lines. Reresby's letter of condolence to his grandmother after the death of her husband, Arthur Doble, 'My Darling Granny Do . . . it must have been such a dreadful blow to you, and I too shall miss him dreadfully . . .I am sure Gong-gong would loathe to be a short-sighted, crippled old man of eighty, and I cannot believe that my other grandfather is enjoying life to its full, at his age, and the state he is in now  . . . Daddy rung us up while we were in London, and when I collected Mummy to go off for lunch . . . she told me the news . . . When we arrived back at Weston, poor darling Mamma got very hysterical . . .We all feel so distressed for you, as you will be so lonely without Gong-gong, and his great sense of humour and intelligence . . .Best Love, my darling from Reresby';  Reresby Sitwell to Sacheverell and Georgia Sitwell, April 3, 1946, Training Detachment, Devon.   2pp., single leaf, 49 lines, (lacks original envelope),  Reresby writes to his parents from Training Detachment, 7/B Grenadier Guards, Leawood Camp, Devon, 'CAUTION: - This is going to be long . . . ', Reresby apologises for the awful writing paper, '(Battle Camp and all that you know) . . .  ', enthusiastically and in great detail, including two sketches, he tells his his parents of 'recent idiotic section attacks and a Night Scheme . . .', Reresby and a friend, Robin Leigh Pemberton, were Platoon Commanders over Guardsmen for the first time, Pemberton's platoon got lost for an hour, 'the result as you can imagine was Chaos, on the whole, & to everybody's surprise I did better than the blue-eyed boy Robin! . . . Sorry about all this military stuff; but as I never tell you anything about my training other than the idiosyncrasies of sergeants, I thought it might interest you, . . .  Isn't it wonderful news about Virginia? I am so glad . . .  '; 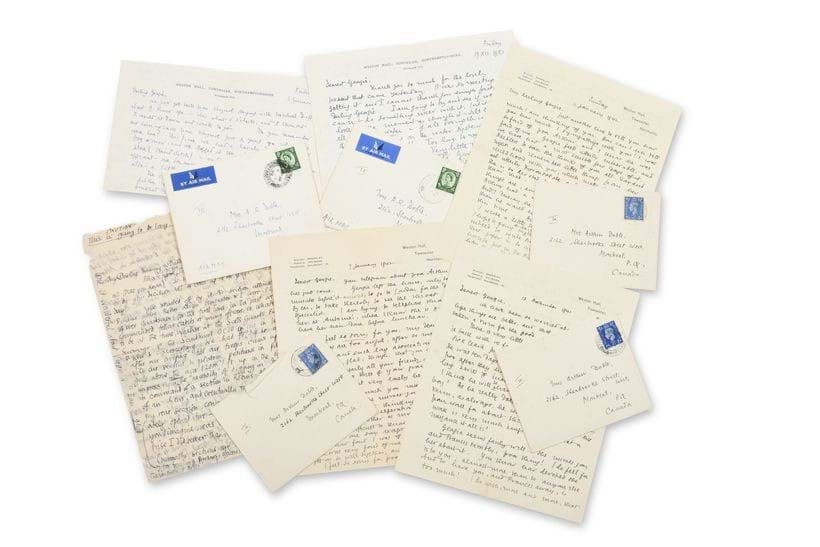 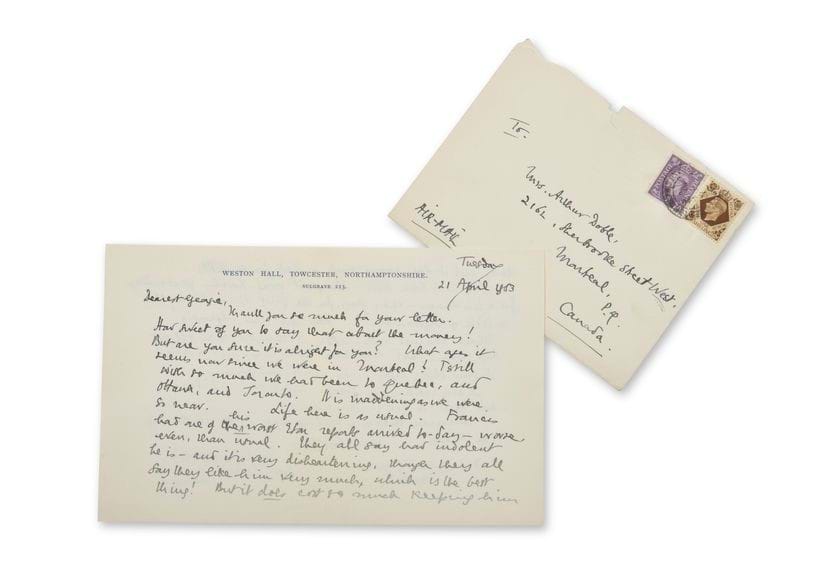 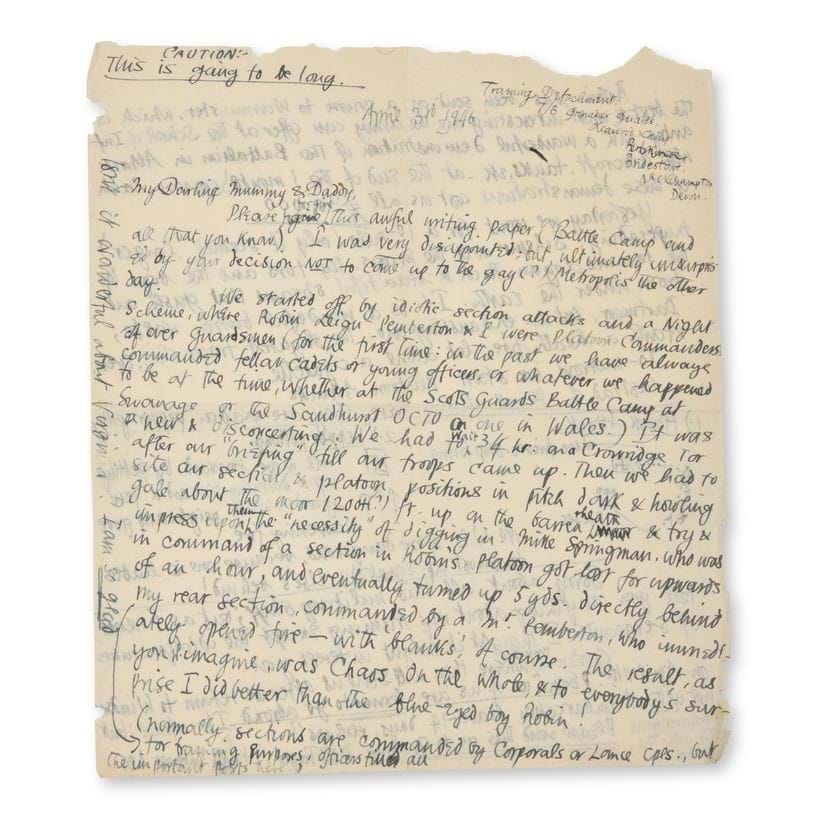