We are grateful for Professor Bernard Aikema for confirming the authenticity of this work from a photograph.

Catalogue Note:
This drawing is from a distinctive group of documented Punchinello drawings by Giovanni Battista Tiepolo (1696-1770); related drawings by Tiepolo of the same period, depicting large groups of Punchinelli include: A large group of Punchinelli cooking (École des Beaux-Arts, Paris, no. 393); A large group of Punchinelli (private collection, Zurich); Punchinelli preparing a meal of gnocchi and parmesan cheese (Baron Dominique-Vivant Denon; Vivant-Denon sale, Pérignon, Paris, 1-19 May 1826, lot 543; most recently, Christie's, New York, 31 January 2013, lot 75, USD 542,500 inc. premium) (Sears Goldman, op. cit., pp. 393-397, no. 5; pp. 420-422, no. 10; pp. 423-429, no. 11). Punchinello was the buffoon character of the 17th century commedia dell'arte, a subject that Tiepolo embraced from the late 1720s through to the early 1760s, primarily in drawings, executing about thirty-six, but also in at least two paintings, and etchings. Tiepolo's interest in Punchinello was most likely stimulated when he was in Verona working on the illustrations for Scipione Maffei's Verona Illustrata (c. 1725). The drawing offered here dates from the early 1730s; it retains the fine delicate line of the earlier drawings but includes two tones of painterly wash, the wash less evenly applied than in slightly later drawings (Sears Goldman, op. cit., p. 376).

Tiepolo, in contrast to his son Domenico, who shows Punchinelli engaged in everyday activities in his Divertimento per li Regazzi, portrays his Punchinelli making and eating gnocchi, and suffering from the excesses of overindulgence. The subject derives from a regional festival, venerdì gnoccolare, which took place in Verona on the last Friday of Carnival. Young boys from the poorest district of San Zeno, dressed up in costume, and gathered at the Palazzo del Podestà to invite the mayor to the town square for a glass of wine and a plate of gnocchi, followed by a town fiesta of eating and drinking until dawn.

This drawing depicts a jumbled group of Punchinelli; two figures on the right are engaged in the cooking and presentation of gnocchi, but most have surrendered to the gnoccolonità that affects unlucky Punchinelli after the feast - several are drunken or ill (Sears Goldman, op. cit., p. 390). Some of the figures in this drawing can be found in other Tiepolo Punchinello drawings. For example, to the left of the drawing is a prostrate Punchinello with a protruding stomach lying on top of his hat; a similar Punchinello is depicted in Drunken Punchinello in the Musée de Picardie, Amiens (M.P. 975-6) and Two Punchinelli in the Fondazione Giorgio Cini, Venice (30.082). The Punchinello slumped over on the ground in the centre of the present drawing has its counterpart in Punchinelli cooking gnocchi (formerly Tito Miotti, Udine) and Three Punchinelli gathered around a gnocchi pot (Kennedy Onassis estate sale, Sotheby's, New York, 24 April 1996, lot 250). The composition of the present drawing is additionally related to a disegno di Pulcinella senza Pulcinella (c. 1724) by Tiepolo in the Staatliche Museen zu Berlin (inv. 11772).

A toppled gnocchi pot or Punchinello hat, a wine flask, and a walking stick lie in the foreground. The use of scattered objects in the front appears in other Tiepolo drawings, for example, La folla e i serpenti, but in the world of Punchinello these symbols of the venerdì gnoccolare are represented differently: Punchinello's hat, a fallen quiver of arrows; the wine flask, a ceramic pot with a grotesque carved mask, Punchinello's walking stick suggesting a makeshift caduceus, a serpent-encircled staff (A. Rizzi, Mostra del Tiepolo: disegni e acqueforti, Milan, 1971, p. 17, no. 9; G. Vigni, Disegni del Tiepolo, 2nd ed., Trieste, 1972, pp. 53-54, no. 6).

George Knox, the Tiepolo art historian, suggests that this drawing is among the earliest of the Punchinello drawings because of its fine line and delicate, even use of wash (Knox, op. cit., p. 441; G. Knox, Tiepolo: A Bicentenary Exhibition, no. 6). He further proposes that this drawing may be linked stylistically with the studies for the Villa Loschi at Biron, executed around 1734 (Knox, op. cit., p. 441). The present drawing, and others of this period, undoubtedly mark the moment that Tiepolo's draftsmanship assumes its mature form (G. Knox, Tiepolo: A Bicentenary Exhibition, 1770-1970; Drawings, mainly from American Collections, by Giambattista Tiepolo and the Members of His Circle, Cambridge, Mass., Fogg Art Museum, Harvard University, 1970, no. 13).

Scipione Maffei (1675-1755), a Veronese writer, art critic and collector, was possibly the patron of the Punchinello works (Knox, op. cit., pp. 439-446). Tiepolo visited Verona twice, around 1730 when he worked with Maffei on Verona Illustrata, and nearly thirty years later in 1760 to paint the ceiling of the Palazzo Canossa. By the middle of the 18th century, however, Punchinelli drawings were collected outside Verona; in 1761, Count Francesco Algarotti's wrote to Pierre-Jean Mariette that he had 'les plus belles polichinelles du monde de la main de notre célèbre Tiepoletto' (Knox, 1984, op. cit., p. 444). Moreover, many artists made copies after Tiepolo's drawings, whether in pen and ink or as prints. Some of these were direct copies; others, such as the artist Georg Friedrich Schmidt's (1712-1775) 1751 etching, after Three Punchinellis cooking gnocchi, was based principally on the drawing but contributed new elements as well (Sears Goldman, op. cit., p. 364).

Later, this drawing was in the celebrated art collection of Henry Oppenheimer, F.S.A., until sold in a three-day sale held by Christie's in July 1936. Oppenheimer's art collection, housed at 9 Kensington Palace Gardens, London, became the place to visit for all visiting museum directors and experts, and his art works contributed to almost every Loan Exhibition of Works of Art in London. Born in Washington, and trained in Frankfurt, he acquired his immense wealth through a partnership in the London firm of Speyer Brothers, which allowed him to indulge his passion for a vast array of art including engravings, small Greek and Egyptian antiquities, Renaissance jewellery, enamels, metal-work, ivories and majolica. In 1912, he purchased a large number of J.P. Hesseltine's Old Master drawings and thereafter Old Master drawings dominated his collection. After 1918, it could be said that no other private collector had amassed such a rich collection of drawings by the Italian Masters than Oppenheimer. Oppenheimer's collection has been said to illustrate the growth of Art in Europe; starting from the early Renaissance, the collection included works by Leonardo da Vinci, Raphael and Michelangelo in addition to drawings from the preeminent Old Masters of France, Germany and the Netherlands.

Giovanni Battista Tiepolo (1696-1770)
The Italian Rococo painter and printmaker, Giovanni Battista Tiepolo (1696-1770) was born on 5 March 1696 to a wealthy Venetian family. In 1717, he enrolled in the Venetian painters' guild, and trained under Gregorio Lazzarini. For the first 20 or so years of his career, he worked in Venice and the Veneto region. Tiepolo had a very creative imagination, and produced a series of notable frescos: Institution of the Rosary (1737-1739, church of the Jesuits); Scenes from the Story of Anthony and Cleopatra (Palazzo Labia); Chariot of Venus (Palazzo Rezzonico); the ceiling of Palazzo Matinengo; the ceiling of the chapel of St Theresa; and the Triumph of Faith (1743-1744, chapel of S Maria della Pietà). In 1750, he was commissioned to decorate the archbishop's palace in Würzburg, where he spent three years creating a series that is regarded as his masterpiece: Triumph of the Arts. In this later period, he was influenced by Paolo Veronese, but it was his individual talent that revolutionized interior decoration by introducing bold dynamic compositions and large luminous skies. In 1762, he was invited by Charles III to decorate the royal palace of Madrid with fresco paintings. Together with his sons, Giovanni Domenico and Lorenzo, who were also his assistants, his works at the Escorial include: Vulca's Forge (in the Garden Room); an Allegorical Figure of Spain (on the ceiling of the Antechamber); and Allegorical Figures of the Spanish Provinces (on the ceiling of the Great Hall). He additionally painted frescos and an altarpiece for the palace of Aranjuez, and frescos for the convent and the orangery. 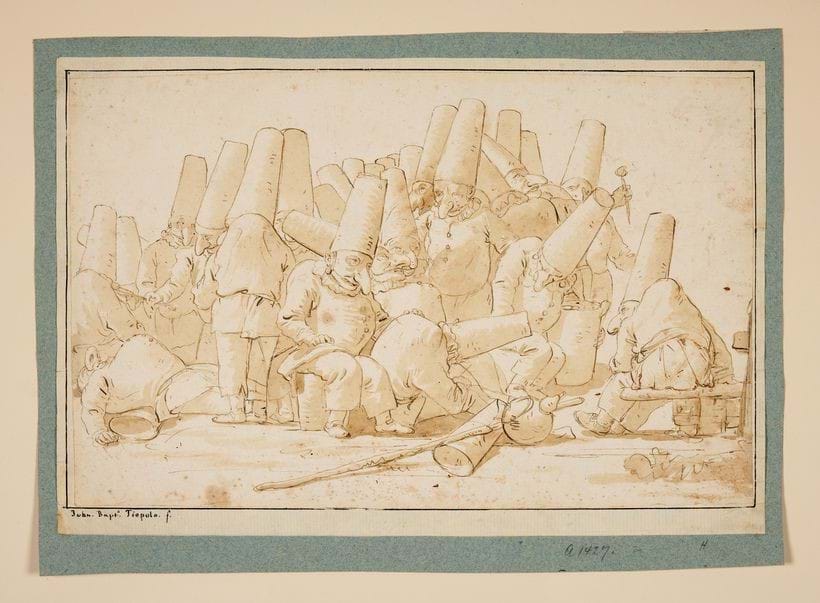 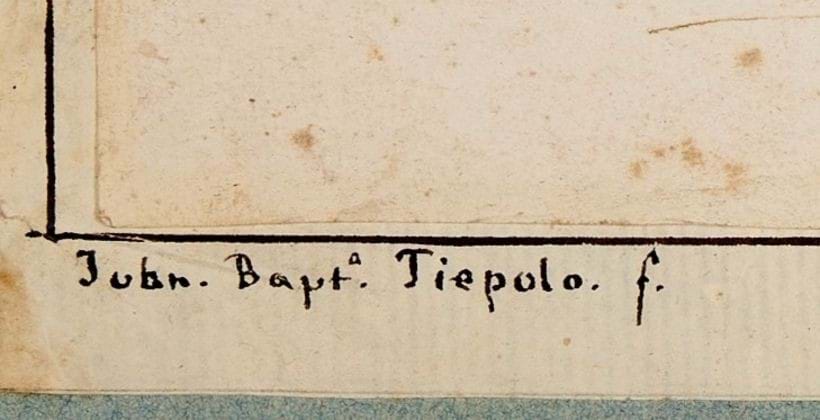 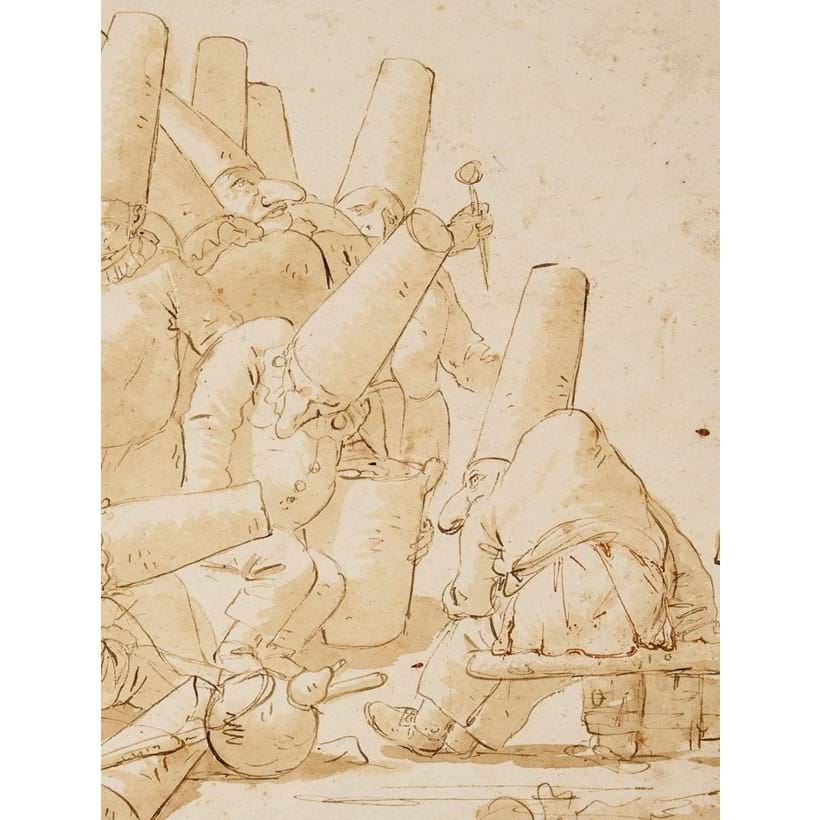