Lot 3 θ: Leaf from the Old Gelasian Sacramentary, containing a record of the earliest Merovingian and northern European forms of the liturgy, or an ordines Romani, a pre-Carolingian order of liturgical service, in Latin, decorated manuscript on parchment
[Germany or Switzerland (most probably San Gallen), late ninth century]

Large fragment of a single leaf, with 31 lines of a probably German Carolingian minuscule, with a distinctly low and squat et-ligature, an 'm' suggesting Insular influence, few abbreviations, some opening words in hand imitative of uncials, red rubrics (now oxidised in places), one 2-line initial 'H', recovered from reuse in a binding and hence with margins trimmed, but without loss of any lines of text at foot, to only small losses to small sections of text at upper and lower inner corners, folds and stains, these obscuring much of text on reverse, but readings here awaiting lifting with UV light and careful reading, overall fair and legible condition, 243 by 140mm.; in cloth-covered card binding

THIS UNASSUMING LOOKING LEAF IS AN IMPORTANT AND HITHERTO UNRECOGNISED WITNESS TO A LOST MANUSCRIPT OF THE OLD GELASIAN SACRAMENTARY, THE MEROVINGIAN LITURGICAL RITE THAT PRECEDED THE CAROLINGIAN ONE, AND KNOWN ONLY FROM A TINY HANDFUL OF MANUSCRIPT WITNESSES; MOREOVER, NO OTHER COPY HAS COME TO THE MARKET BEFORE, AND NONE IS LIKELY TO EVER EMERGE ON THE MARKET AGAIN

1. Most probably produced within the scriptorium of San Gallen, or a house directly connected to that monastery, and sharing close affinities with two other copies of the text reportedly produced there in the late ninth or tenth century (see below). Then dismembered and reused at the close of the Middle Ages on a bookbinding.

In its simplest form, the Sacramentary served as the principal collection of Biblical and liturgical texts spoken by the priest during services, and was replaced by other compilations such as the Missal during the course of the twelfth century. However, it had not always existed in an immutable form, and records survive of an attempt to produce a liturgical compilation to serve the same function in an incomplete collection of missal booklets of the fifth or sixth century now known as the Leonine or 'Verona' Sacramentary (now Verona Cathedral, MS. 85). Some centuries later, it was reported that another attempt had been made by Pope Gelasius I (d. 496), and this lead to the erroneous naming of the present text. It is now thought to date to either the seventh century or earliest decades of the eighth century, and contains a hybrid Gallican-Roman text inherited from Merovingian worship, and practised in some form throughout Gaul, Spain, Britain and Ireland, and perhaps also northern Italy, with the alternative Roman rite holding sway in only Rome and southern Italy. As a functioning liturgy it did not survive the Carolingian renaissance, and after Pope Hadrian I presented a copy of the liturgy approved by Pope Gregory the Great to Charlemagne in 785, that 'Gregorian' version was disseminated quickly throughout the empire, driving out its predecessor.

Due to its early replacement and demise, it survives as a coherent text in only three codices, plus, to the best of our knowledge, three early fragments of only a few leaves surviving from other lost copies of the whole text, a single witness containing readings from it, and the readings of a final lost manuscript recorded in a publication of 1777. These witnesses are: (i) Vatican, MS. Reginensis 316 (once owned by Queen Christina of Sweden, and carried by her to Rome at the end of her life) + Paris, BnF., latin 7193, fols. 41-56, the prime witness, produced in Merovingian Gaul in the mid-eighth century and forming the basis of all editions (see H.A. Wilson, The Gelasian Sacramentary: Liber Sacramentorum Romanae Ecclesiae, 1894, and L.C. Mohlberg, Liber sacramentorum Romanae aeclesiae ordinis anni circuli, 1960); (ii) Rheinau, MS. 30 (now in Zürich, Kantonsbibliothek), including a Sacramentary of c. 800 with Gelasian readings with later revisions; and (iii) San Gallen, MS. 348, a tenth-century Sacramentary with Gelasian readings with later revisions. The early fragments are: (iv) British Library, Additional MS. 37518, fols. 116-117, the so-called 'Baumstark fragment', an eighth-century binding fragment of English origin or produced in an Insular Continental centre (see A. Baumstark, 'Ein altgelasiansiches Sakramentarbruchstück insularer Herkunft', Jahrbuch für Liturgiewissenschaft, 7 , 1927, pp. 130-136); (v) BnF. lat. 10837, fols. 42-43, the so-called 'Bannister fragment', an English witness of the eighth century (see H.M. Bannister, 'Liturgical Fragments: A. Anglo-Saxon Sacramentaries', in Journal of Theological Studies, 9, 1908, pp. 406-411); and (vi) four eighth-century leaves in Cologne City archives, of English origin or produced in an Insular Continental centre (see H.M. Bannister, 'Fragments of an Anglo-Saxon Sacramentary', Journal of Theological Studies, 12, 1911, pp. 451-454). To these must be added (vii) a liturgical index in Reims, Bibliothèque municipale, MS. 8 (C.42), with extracted readings, and (viii) a lost manuscript recorded by Dom Martin Gerbert, abbot of St. Blaise in the Black Forest, in his attempted edition of 1777. Gerbert used the Rheinau and San Gallen manuscripts noted above, as well as a manuscript he identifies as "Sangalliensis olim nunc Turicensis" (of San Gallen, but now of Zürich), and of the tenth century, and having parallel versions of the Gelasian, Gregorian and Ambrosian rites (on this manuscript see Wilson, pp. xx-xxi). It seems to have been based on the San Gallen manuscript but with readings improved for sense. Despite a nineteenth-century identification of this last witness as Zurich C. 389, that manuscript does not contain a Sacramentary, and modern scholarship has failed to trace the lost witness.

The leaf here shows strong textual affinity to the San Gallen manuscripts, with the strongest to the lost manuscript, but while it has many apparent scribal errors it does not share all the reported corruptions of that lost witness. Most probably, it was produced within the same Carolingian mileau, which appears to have had an antiquarian interest in earlier liturgical practises. The text here contains part of I:35 of the text, opening with a variant rubric reported only by Gerbert for his lost witness ("[Et dum hoc cantat, semper manum super caput infantibus tenet: hoc finito iterum accipiens alter acolytus ex ipsis in]fantibus feminam ut [sic] supra, et interrogat presbyter ...") followed by a paragraph truncated down to a few short lines and apparently in a different order to that found in the Vatican manuscript, before the rubric "[Hoc e]xpleto prosequitur [sic] presbyter his verbis" is followed by the text opening "Haec summa est ...", with much of that section underneath the discolouration on the reverse.

It has been drawn to our attention since our catalogue went to press that as well as appearing in the Gelasian Sacramentary, the text here also occurs in Ordo Romanus XI and other ordines romani, these being extremely rare and important records of the orders of early liturgical services. The text is catalogued as S. Keefe, Catalogue of the works pertaining to the explanation of the Creed in Carolingian manuscripts, 2012, no. 114. Ordo Romanus XI is first recorded in Carolingian manuscripts, but is one of the two oldest ordines to survive, and has been ascribed to the sixth or seventh centuries. 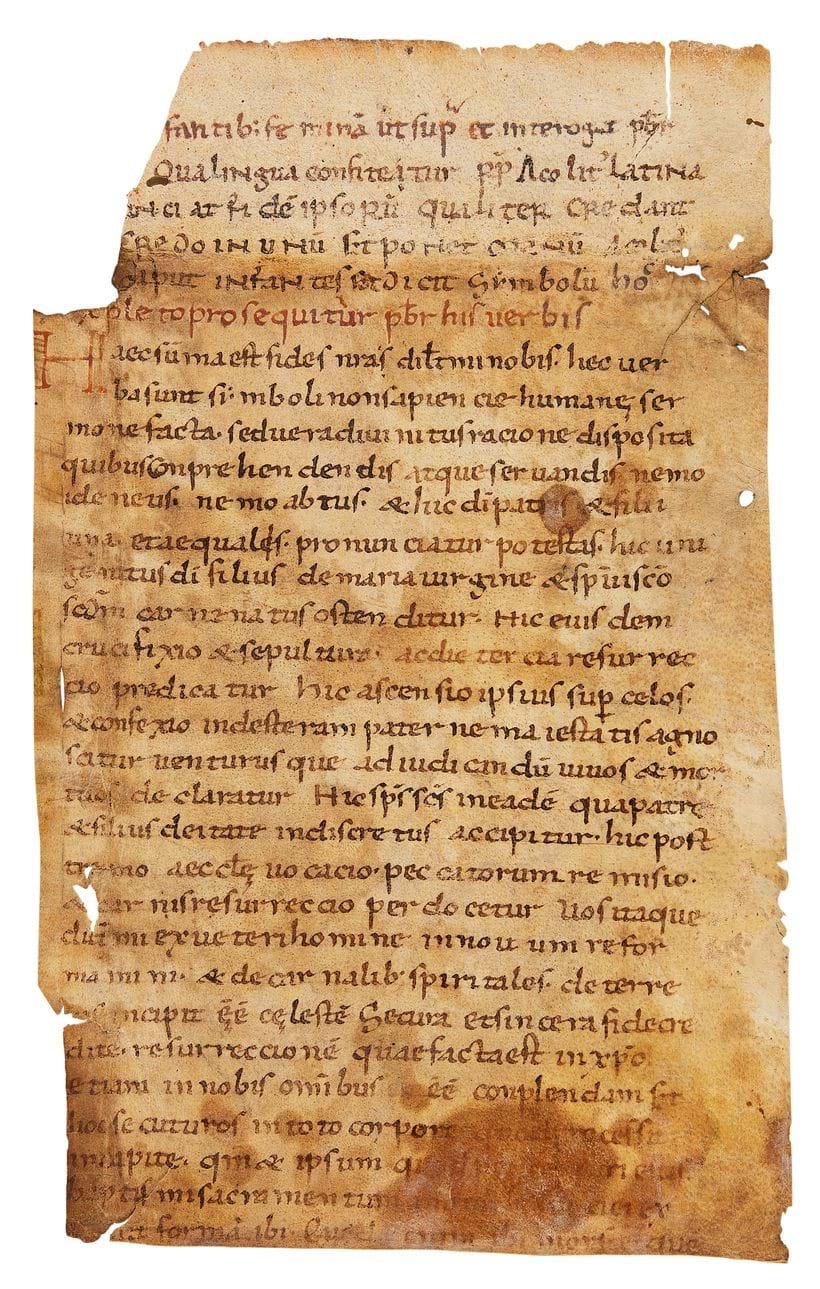