OSCAR WILDE:   MONTGOMERY HYDE. H. (1907-1989). LAST LETTERS OF OSCAR WILDE TO ROBERT ROSS, 1898-1900. A very interesting and rare Wilde item, transcribed by Montgomery Hyde at a time when the full contents of these letters were almost certainly only available or circulating in just a few copies (perhaps no more than two).  8vo., (270 x 220mm), bound within brown paper wrappers, typescript title to front, tied with thin green ribbon, 60 typescript letters (ex 63), comprises:  2pp. Preparatory Note by H. Montgomery Hyde, London, October, 1949; 1pp. Abbreviations, the letters typed to single sides of 100 leaves, each letter numbered I - LXIII top centre of page, (letter nos. 37, 38, 39 are not present), numbered abbreviations to lower r.h. corners of pages, 'M.M. 64 - 90', (Max Mayerfield), and 'D. (Dulau & Co. Ltd.), 68 -130', with numerous names, references to individuals or homosexuality underlined in red ink;  the first letter, '[Paris] May '98', the final letter, numbered LXIII, '(dictated), Hotel d'Alsace, Rue des Beaux Arts, Paris, Wednesday, [November 1900]', Preparatory Note by H. Montgomery Hyde:  'The following 63 letters and post-cards were the last written by Oscar Wilde to his friend and literary executor, Robert Ross. They cover the period from May, 1898 to November, 1900, thus completing the series begun by Wilde in Reading Gaol and partly published in De Profundis (1908 1.) and continued after his release in France and Italy under the later published titles of After Reading (1921) 2.  and After Berneval (1922) 3. The letters were transcribed by me after copies made by Walter Ledger, the well known Wilde collector, from a type-written transcript of the originals which had previously been prepared by Stuart Mason, Wilde's biographer. 4.  Ross to whom the originals were addressed, left them to Vyvyan Holland, Wilde's surviving son, and on the latter's instructions they were put up for auction, after Ross's death, in the Dulau sale rooms in London in 1929, when they were purchased by the late Mr. Gabriel Wells acting on behalf of William Andrews Clark. They are now in the Clark Memorial Library in Los Angeles, California. Extracts from this correspondence appeared in the Dulau Sales Catalogue, but the expurgation to which they had been subjected was so drastic as to render most of the personal references unintelligible. In the complete text given here the omissions are shown in red. Some of the letters have also been published in a German translation by Dr. Max Mayerfield, Oscar Wilde, Letze Briefs (1925), but here again the omissions, though less than in the Dulau Catalogue, are by no means inconsiderable . . . , 1. Edited by Robert Ross.  2. Anonymously edited by Stuart Mason.  3. Edited by More Adey.  4. The Ledger Version is now in the Robert Ross memorial Collection in the Bodleian Library, Oxford.  5. One letter, dated April 16, 1900, had been previously published in one part by Robert Ross in his Selected Prose of Oscar Wilde (1914).  6. Dulau Catalogue at pp. 16-17'. Oscar Wilde (1854-1900), was an Irish poet and playwright. He was convicted of gross indecency for consensual homosexual acts in one of the first celebrity trials and imprisoned 25 May 1895-19 May 1897. Wilde left England for France on the evening of his release, and developed meningitis in 1900 whilst living in Paris:  Robert Ross (1869-1918). was as an ex-art editor at the Morning Post, and his role as literary godfather was of primary importance to the Sitwells. Osbert had met Robert Ross before the First World War, and during the war years he got to know him well. Ross's bachelor rooms at 40 Half Moon Street are nostalgically recalled in 'Noble Essences' and it was through Ross that the Sitwells met amongst others, Edmund Gosse, Arnold Bennet, Siegfried Sassoon Wilfred Owen and Reginald 'Reggie Turner. 'Reggie' was one of the few friends who remained loyal to Oscar Wilde and supported him after his release from prison. Osbert Sitwell put a comic version of his friend Reggie Turner as 'Algy Braithwaite,' into his verses 'On the Continent',  'Reggie' left England to live in Florence, concerned that some of the hostility toward Wilde might continue to be directed towards him. Oscar Wilde's correspondence to Reggie is part of the Lady Eccles Collection bequeathed to the British Library. Harford Montgomery Hyde (1907-1989) was a barrister, politician and author and a significant figure in the legalisation of homosexuality. He became a Member of Parliament in 1950 and during that decade was a vocal supporter of homosexual law reform. However, when the Wolfenden Report ('The Report of the Departmental Committee on Homosexual Offences and Prostitution') was introduced into the House of Commons in 1958, he was deselected by his party, the Ulster unionists, for supporting its implementation. In 1972 he was the author of the first history of homosexuality in Great Britain and Ireland, The Other Love: an historical and contemporary survey of homosexuality in Britain. In 1948, the year before he transcribed these letters from Wilde to Ross, he had published The Trials of Oscar Wilde, which was followed by other books on the author, as well collaborating on the screenplay of the 1960 film of the same name, starring Peter Finch. Montgomery Hyde's Wilde collection was purchased by Donald and Mary Hyde (no relation). Mary Hyde, Lady Eccles as she become on her second marriage, bequeathed her Oscar Wilde collection to the British Library in 2003. All of the letters have now been published in full in Holland and Hart-Davis, The Complete Letters of Oscar Wilde, 2000, pp.1069-1195. 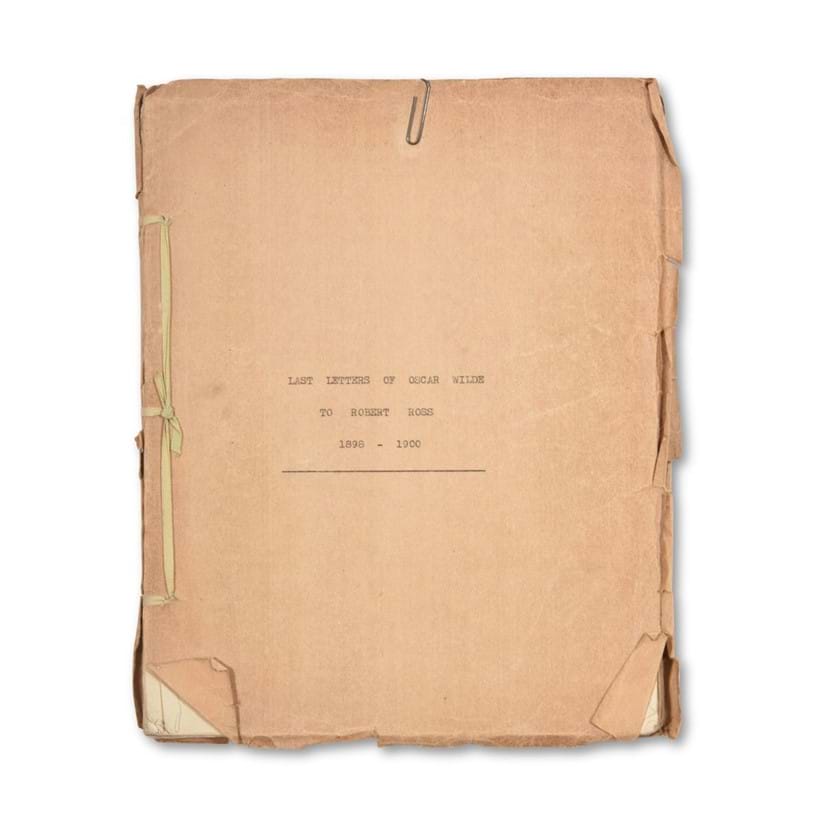 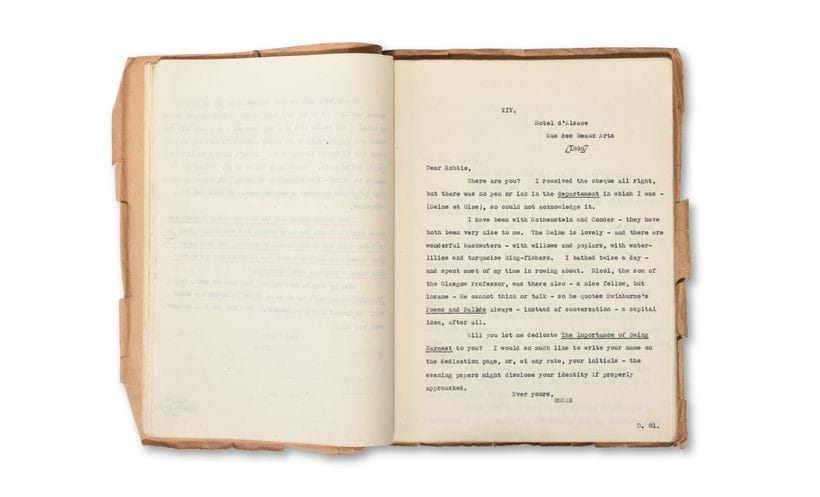 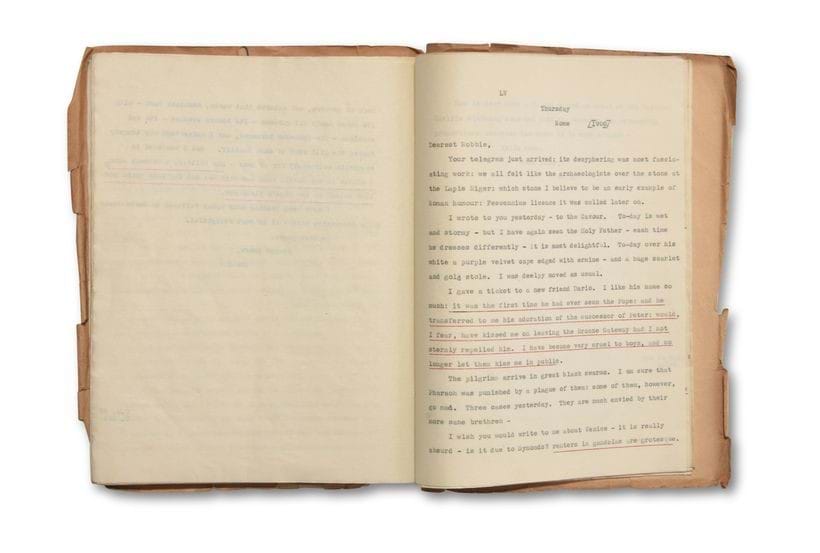