54 leaves (plus a single paper endleaf at each end, and a later parchment endleaf at front with title in pen), wanting two leaves at beginning (quire signatures begin “aiii”, these most probably once a blank endleaf and another with the name of the author and formal title of the text down to “...Como successe al Insula Ghierbia” that are now found at the head of the first original leaf here (the missing opening lines recorded by M. Guistiniani, ‘Gli scrittori liguri descritti dall’abbate Michele Giustiniani patritio’, 1667, p. 131, foot of column 1 there), else complete, contemporary quire and leaf signatures, collation: i8 (wanting first 2 leaves), ii-vi8, vii6, single column of 13 lines of a fine humanist hand, rubrics and crucial words in red, initials in simple red or dark blue, some gold capitals used in dedication on fol. 2v, frontispiece of main text with two initials in liquid gold on blue grounds, text opening with 4 lines of red capitals, full decorated border of realistic jewels, gilt architectural foliate sprays and columns and white flowers on green, blue and burgundy grounds, enclosing coat-of-arms of Adorno family with green wreath in bas-de-page, text faded and slightly flaked in places, with some words overwritten, discolouration of parchment at foot of frontispiece original to leaf, slight smudging to arms, 182 by 120mm.; later French calf over pasteboards, spine gilt-tooled, some small scuffs and bumps, small loss of leather at foot of spine, else good condition

THE SOLE RECORDED MANUSCRIPT WITNESS TO THIS UNEDITED AND UNSTUDIED TEXT, A LENGTHY EYE-WITNESS ACCOUNT OF THE SPANISH CONQUEST OF MUSLIM TRIPOLI IN 1510; AND THIS THE AUTHOR'S PRESENTATION COPY TO HIS PATRON 1. This must be the presentation copy produced by the author of the main text, Battistino de Tonsis (fl. 1500), for his patron, Count Gerolamo Adorno (1483-1523), himself brother of the doge of Genoa, and a celebrated politician and diplomat in his own right (Dizionario Biografico degli Italiani, I, 1960, pp. 296-98). The text here is dedicated to “Hieronymo Adorno Conte de Renda” in gold capitals on the leaf facing the arms of the Adorno family. The codex is dated at its end on fol. 54v: “Scripta in Napoli A di xx de Octobre Nel Mille cinquece[n]to dece”. Gerolamo Adorno appears to have been a substantial art patron, and is reported as having received a work by Titian as a gift from Paolo Giovio.

2. Almost certainly still in Genoa in the 1630s, and this copy evidently recorded there by Michele Guistiniani (1612-80), noting some of the dedicatory verses at its front. Note that there Guistiniani refers to another copy in the Bodleian (following Catalogus librorum bibliothecae publicae，1605, p. 337), but his comments about its royal commission reveal it to be the similarly titled work of A. Ulloa instead.

3. In French ownership by the nineteenth century: rebound before then reusing a cutting from a French printed proclamation with the date 1782 as an endleaf. The present volume thus almost certainly that recorded by H. Ternaux-Compans (1807-64), French bibliographer, in his Bibliothèque Asiatique et Africaine in 1841, as no. 2956: “Batestino de Tonsis, Historia della guerra di Tripoli di Barbaria , in-4, 1610” (albeit with a small typographical error for its year). The main text here is an eye-witness account of the invasion of Muslim Tripoli by a Spanish-Genoese fleet under the command of Don Pedro Navarro (c. 1460-1528), count of Oliveto. This was a key part of an ongoing struggle throughout the sixteenth century between the Hapsburgs of Spain and the Ottoman Empire and their allies (here the Berber Hafsid rulers who controlled Tripoli, backed by the sea-power of Barbary pirates), for control of the rich trade routes between Libya and southern Europe. The narrative begins here with the departure of the Spanish and Genoese from the island of Favignana near Sicily, and onwards to Melita (Mdina on Malta) and the city of Tripoli. Some detail is given on the weather conditions, and once the narrative reaches Libya itself, on the form of the initial assault on the citadel and the city of Tripoli with cannon and ‘bombarde’ and the forces of Galleazzo Guistiniani of Genoa. The author notes that the Muslim inhabitants withdrew to the citadel, the “Moscheta maiore, id est Ecclesia” (‘Grand Mosque, that is [their] church’) and some towers, from where they continued to fight. After the fall of the city most of the citizens, including elderly men and women, children and young girls of noble birth gathered in the Grand Mosque, where they were massacred by the invaders. The invaders then moved on to the citadel, where “il signoranzi Tiranno chiamato” (‘the lord [who was] called Tiranno’) was imprisoned, explaining that “in quel linguagio” (‘in their language’) he was called “Sieche” (an Italian attempt to spell ‘sheikh’), along with his wives and children. To the best of our knowledge, this is the only source to name the ruler of Tripoli at this time. There then follows an account of the pre-existing problems between this ruler and “Re de Tunesi” (‘king of Tunisia’). Following the account of the invasion, there is a geographical account of the city of Tripoli, noting it was protected on three sides with a double wall and a moat, the remaining side open to the sea with mooring for 400 ships, and that during the assault it was these defences that trapped the population, and the only escapees did so through a weak point in the walls in the Jewish quarter. A section on the geography of the neighbouring regions follows, partly drawn from Western sources. From here the narrative turns to the failed attempt to capture the island of Djerba. It ends with the leaving of Tripoli under the command of two generals, named Samaniego and Palumbino, and an account of the return of the navy to Naples, where this account was written.

Sources for the campaign are few. A single letter by the commander of the Spanish forces survives, as does an account in the ‘diary’ of Marin Sanuto, and two letters written by our author here to his patron as battlefield reports, dated 17 July and 26 September 1510 (edited from the sole surviving copies in a University of Bologna manuscript by M. Longhena, ‘L’Impresa di Tripoli nel 1510’, Rivista d’Africa, II, 1912, and discussed again in his ‘La Spedizione contro Tripoli del 1510 (Da documenti bolognesi)’, L’Archiginnasio XXXI (1936), pp. 242-270). Comparison of those letters with this narrative reveals that the present text is a greatly augmented version of the letters in the Bologna manuscript, written up at leisure, a month or so after our author returned to Naples. Thus, this lengthy eyewitness narrative is of substantial historical importance, but due to a mid-nineteenth-century blunder over its date and its survival in private hands, has been all but overlooked until now. No other copy of this text has been traced by us, and beyond the authorship of the letters discussed by Longhena, no record of the text or the author exists in bibliographical works such as Kristeller’s Iter Italicum. It is most probably the sole witness to the text to survive, and thus its appearance now at auction presents a crucial opportunity for its acquisition and subsequent study.

Playfair, The Bibliography of the Barbary States, 1887, item 49.

Bono, Storiografia e fonti occidentali sulla Libia, 1510-1911, 1982, 2, p. 66 (however, following the miscopying of the date by Ternaux-Compans, this author assumes this was an extremely rare printed book produced in 1610). 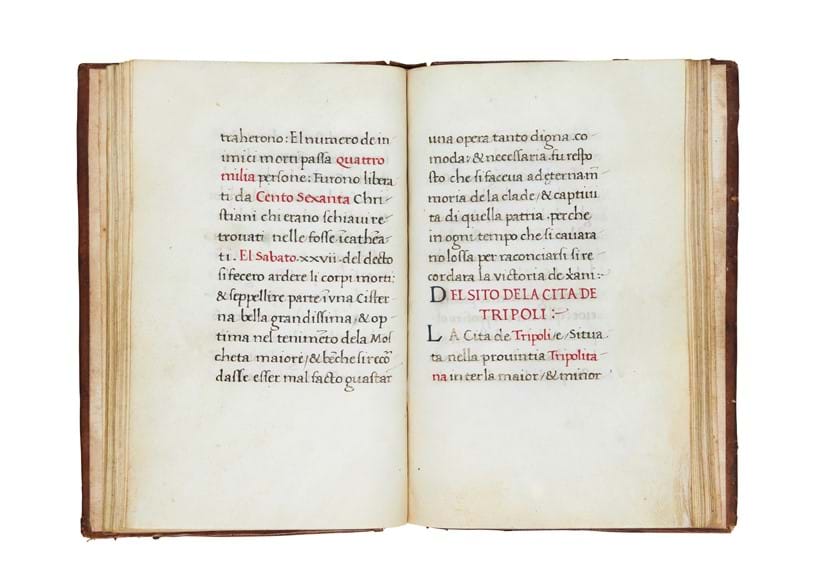