Lot 46: Kitab Alif Laila, the Book of One Thousand and One Nights, in Arabic, short quotations added to twelve cuttings recovered from Christian manuscripts, including various Bibles in Latin and a leaf from a copy of the Decretals, a Menaion and Oktoechos or Parakletike in Greek, an orthodox prayerbook and a Bible in Armenian, and a few originally blank pieces of parchment most probably from similar Christian books, manuscripts on parchment [France, Italy, perhaps England, Armenia, and Byzantium, ninth to twelfth century, with additions from the Holy Land in the late twelfth or early thirteenth century]

THIS CLUTCH OF FRAGMENTS IS OF BREATHTAKING IMPORTANCE AS WITNESSES TO THE FALL OF JERUSALEM; AND THEY ARE MOST PROBABLY ALL THAT REMAINS OF A SERIES OF CODICES LEFT ABANDONED IN THE CITY BY FLEEING CHRISTIANS WHEN IT FELL TO THE FORCES OF SALAH AD-DIN IN 1187, AND THEN REUSED BY THE MUSLIM CONQUERORS AS WRAPPERS FOR THEIR OWN BOOKS. 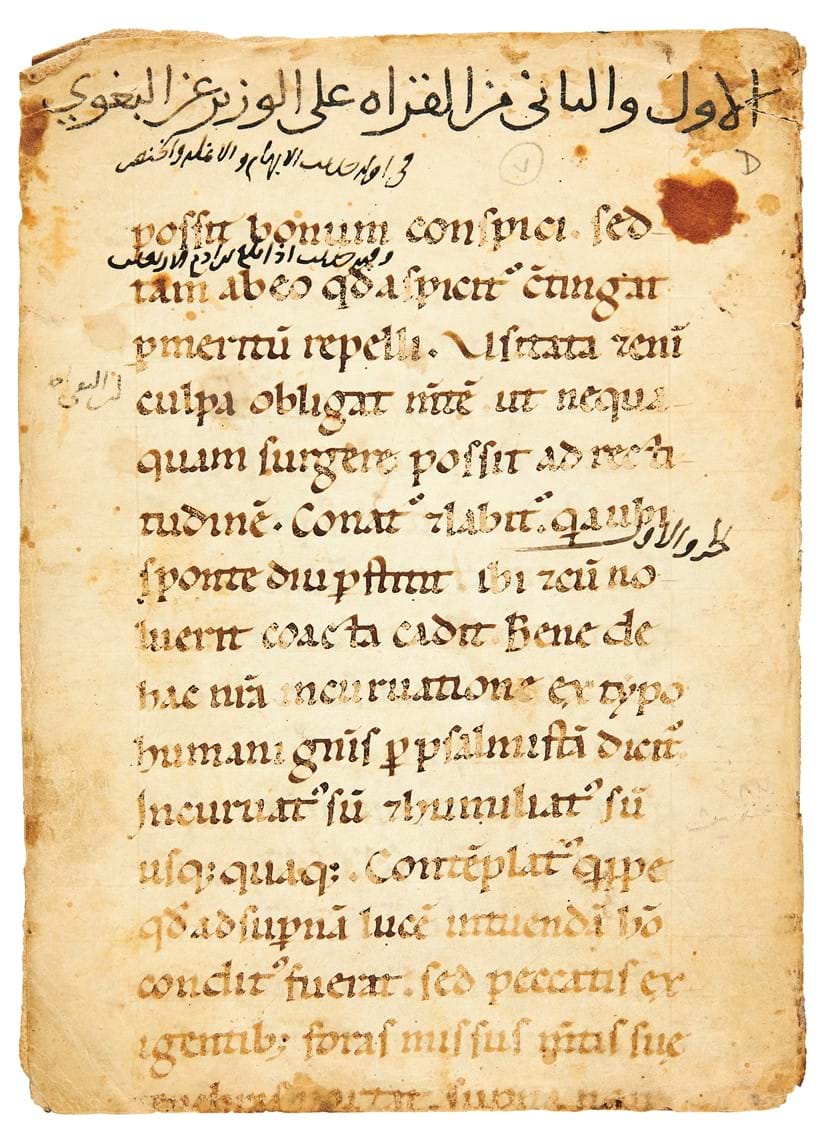 1. Almost certainly from a library in the Holy City of Jerusalem, probably that of the Holy Sepulchre itself, the epicentre of Christendom and Christian devotion. The Crusades and the fall of Jerusalem were of the greatest importance to the history of the Middle Ages and the mind of medieval man. The call to arms to take back the Holy City gripped the population of medieval Europe and drew many thousands of them to strange lands beyond the boundaries of Europe. In addition, the eventual fall of that city to the Muslim invader in 1187 was a crippling lowpoint which inspired political and religious upheaval throughout Europe. Originally these leaves were part of a range of Christian liturgical and legal books from Western Europe, Byzantium and Armenia, dating from the ninth to the mid-twelfth century. Then they were cut up and reused as wrappers on a lengthy Arabic manuscript of One Thousand and One Nights, writing sideways along their blank spaces in handsome unvocalised naskh of not later than the thirteenth century, along with later Arabic names including an apparent reference to the Damascus historian Ali ibn Asakir (d. 1176). No other site apart from the Crusader kingdom of Jerusalem, and probably the Church of the Holy Sepulchre itself, could allow for this mix of scripts. It is of importance that the earliest fragments here are Greek (identified and published by Aiuto in 2006 and 2008). The arrival of the Western Crusaders in 1099 pushed out the Greek liturgy from the Holy Land in favour of a Latin liturgy based on the Rule of St. Augustine. However, Greek observance did continue in the Kingdom of Jerusalem (see D. Galadza, 'Greek liturgy in crusader Jerusalem: witnesses of liturgical life at the Holy Sepulchre and St Sabas Lavra', Journal of Medieval History, 43, 2017). Under Western rule, Jerusalem was the cosmopolitan Christian capital of the East, principally French and Genoese, although the wife of Baldwin II, its ruler, was Armenian. It fell to the forces of Salah ad-Din in October 1187, when the last French nobleman in the city, Balian of Ibelin, negotiated a surrender and peaceful passage to the sea for its occupants. Immediately after the surrender of the city, amid widespread looting, Salah ad-Din ordered the closing of the Church of the Holy Sepulchre, ultimately deciding not to destroy it, but handing it back to the Greek authorities. Other surviving books from Jerusalem, or fragments of them, testify to the carrying of valuable codices from the city by refugees (see British Library, Egerton MS 1139; Cambridge, Fitzwilliam, McClean MS 49; BnF, mss. lat. 9396 and 12056; and Vatican, cod. Vat.Lat.5974), but it should be noted that those were grand and opulent books. What we have here are more probably the last relics of the mundane books of the religious services of the city, abandoned by fleeing Christians, and picked up by some part of the Muslim conquerors and reused for their valuable parchment.

2. These entering Arabic hands in the late twelfth century, perhaps passing then to a member of Salah ad-Din's Syrian forces, where they were reused as wrappers around a copy of Kitab Alif Laila, the Book of One Thousand and One Nights. When sold last in 1993, these cuttings were reported as thought to have have survived in Damascus, and this accords with the fact that in 1187 Salah ad-Din's forces were equally composed of Egyptians and Syrians, as well as the reading of the name of Ali ibn Asakir among the additions.

4. Schøyen Collection, London and Oslo, their MS 1776, acquired in the Sotheby's sale. 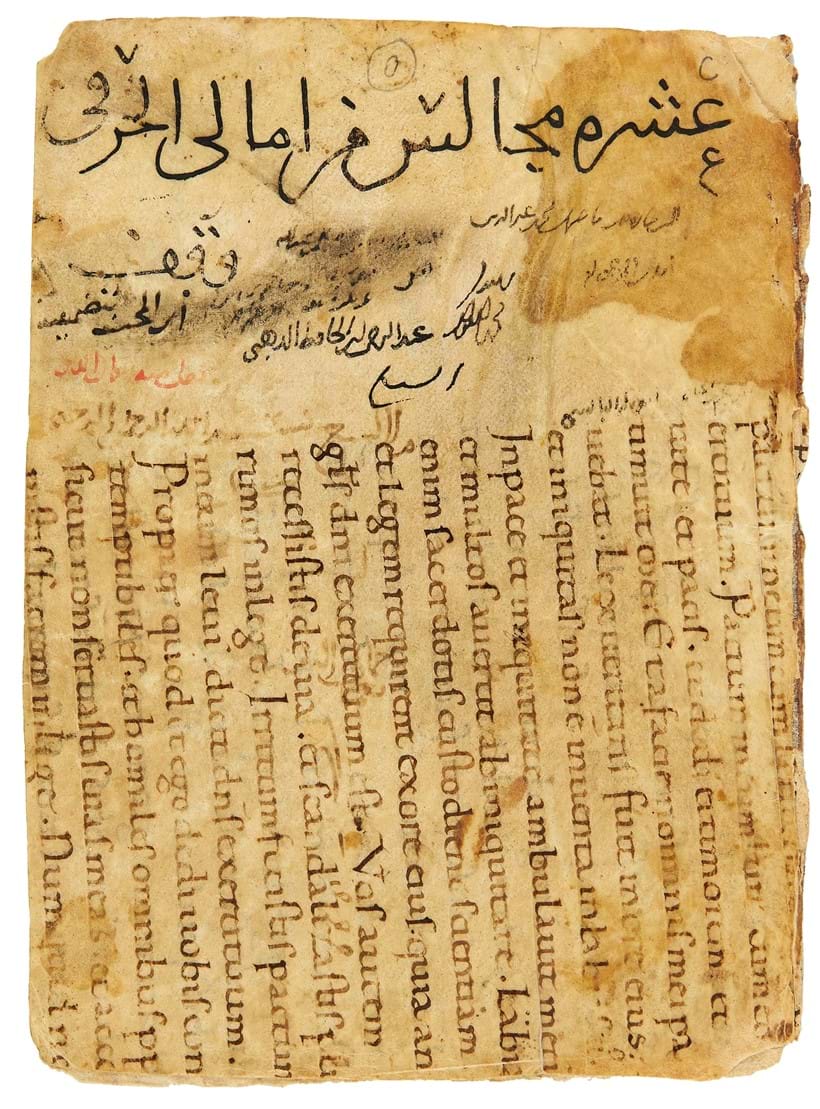 It is an astounding thought that these handful of leaves were almost certainly in Jerusalem when the city fell to the Muslim invaders in 1187, and were left behind by the panicked inhabitants as they fled the city with only what they could carry. As if that were not enough, they were then repurposed by their new owners as wrappers for short stories from the quintessential Middle Eastern romance, and are among the earliest witnesses to that text. Quite simply nothing like these leaves has ever been recorded anywhere else, and it is nearly inconceivable that an archive like this will ever again appear on the market.

In apparent reflection of the predominantly French and Genoese population of Jerusalem under the Crusaders, the majority of Western scripts here are French or Italian, with a single example that could be Norman or just possibly English. The parent volumes were most probably carried by individual members of the clergy to Jerusalem. However, it remains tantalisingly possible that some of these were written by Western scribes in the Holy City itself.

These fragments are also of some importance for Greek and Arabic palaeography and text studies. As D'Aiuto demonstrates, item (h) here, containing a ninth-century Greek Oktoechos or Parakletike is amongst the oldest witnesses to this text, with a main text in the form of an acrostic hymn - a type otherwise known from ancient Georgian translations of Greek hymns of the Office, and most probably bearing witness to a fourth- or fifth-century liturgical practise in Jerusalem, which continued to the ninth century at least and perhaps the twelfth. The script used here is also of extreme rarity, a 'mixed script' of majuscules with minuscule letters interspersed. It appears to have been used elsewhere only in the eighth to the tenth century, on Mount Sinai, in Palestine and in a small number of other areas connected to Syria and Palestine. Less than twenty other examples are recorded.

Finally, the quotations from the Kitab Alif Laila, the Book of One Thousand and One Nights, are among the earliest manuscript witnesses to that text. The earliest recorded is a ninth-century fragment (N. Abbott, 'A Ninth-Century Fragment of the "Thousand Nights", New Light on the Early History of the Arabian Nights', Journal of Near Eastern Studies, 1949), and some part of the text was commented on in the tenth century by Masʿūdī, who notes a work full of untrue stories translated from Persian, Sanskrit, and Greek, including the "book entitled Hazār afsāna, or the thousand tales". Complete codices are known only from only the fourteenth century onwards. 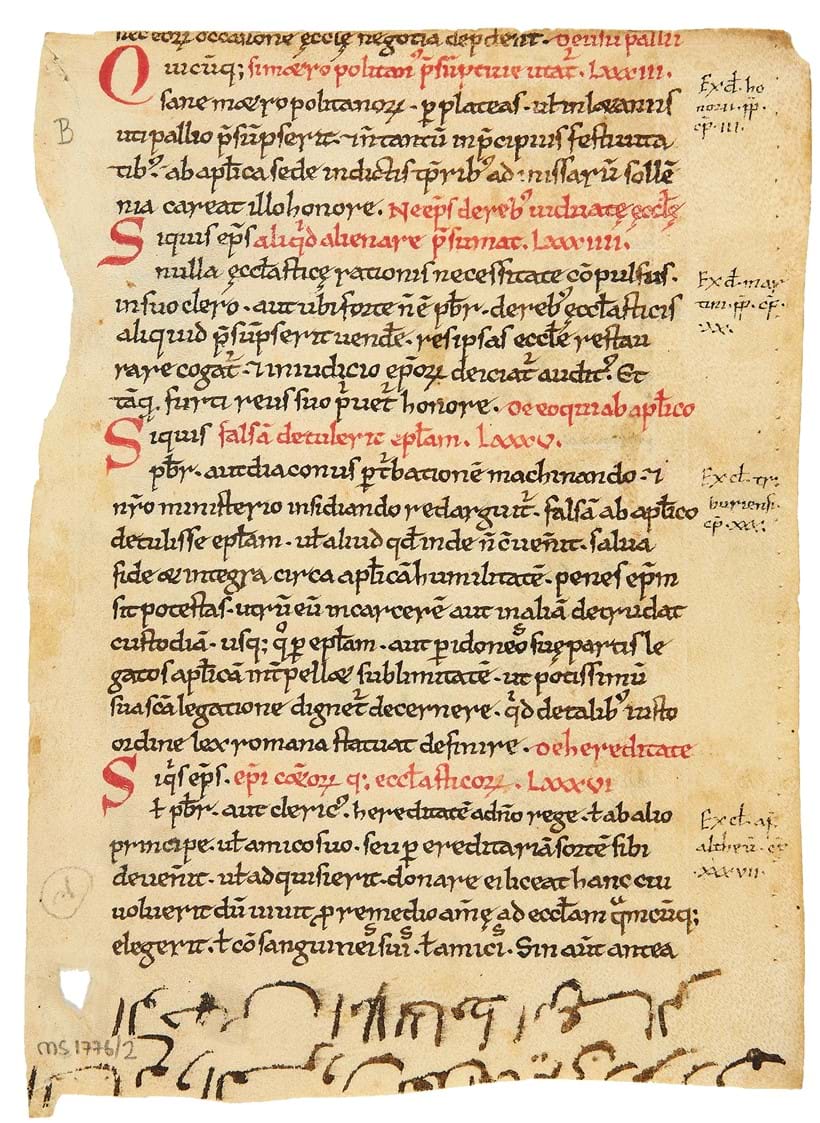 The History of Western Script
A Selection from The Schøyen Collection, in celebration of the Collector’s Eightieth Birthday