Running from 26 August - 16 September 2021, we have our timed online auction 'Open Studio: Bruce Tippett (1933-2017)'. The auction showcases six decades of Tippett's work, giving us a glimpse into why he became a globally exhibited and collected artist who now warrants a long overdue reappraisal of his career. In the decade following graduation from the Slade in 1957, Bruce Tippett achieved more than many artists do in a lifetime. Alan Bowness interviewed Tippett for the Art News and Review in 1958, concluding that “Tippett’s achievement is already such that his development will be watched with considerable interest.” (A. Boweness, Portrait of the Artist: Bruce Tippett, Art News and Review, Vol. X, no. 24, 20 December 1958) 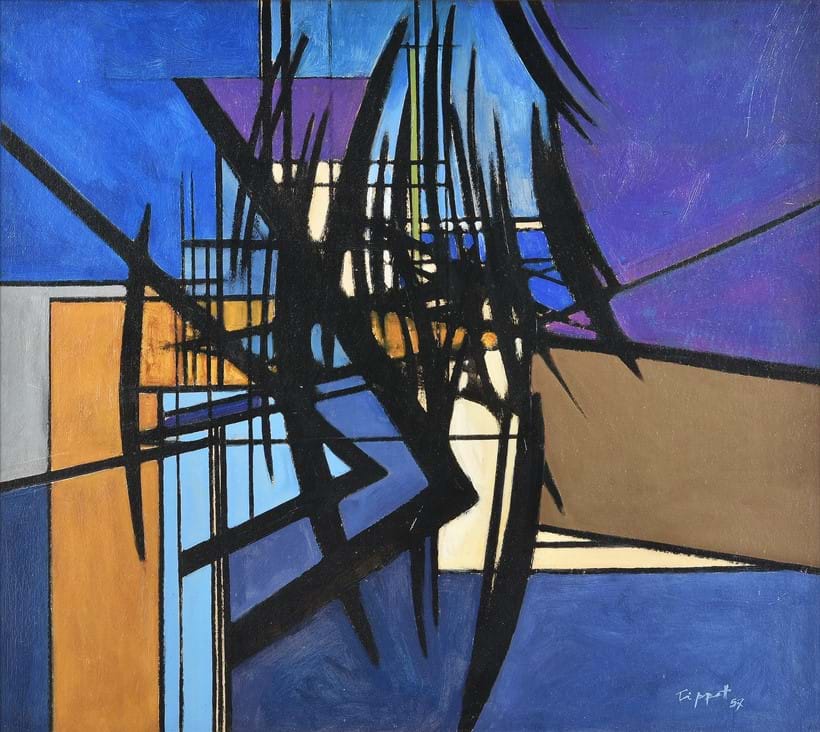 Indeed, over the next ten years he was to exhibit in Rome, Florence, Paris, London, New York, and Los Angeles. The Betty Parsons Gallery in New York and the Kasmin Gallery in London held solo exhibitions and his work was purchased by national institutions such as MOMA, New York, the V&A, London, and the Galleria Nazionale d’Arte Moderna, Rome. He was to design a coat-stand for the famous Gavina furniture factory in Foligno while artist in residence which was later to be manufactured by Knoll. His influence on 20th century design was elevated even further when David Hicks, probably the most influential British interior designer of the 60s and 70s, commissioned many works, including a painting for his own drawing room at Britwell House in Oxfordshire. With the support of Hicks Tippett’s work was not only held in institutions across the globe and being exhibited at pioneering galleries his work was being included in some of the most innovative private interiors of the day. Britwell House | Courtesy of the Estate of David Hicks

Born in Boston, England in 1933, Tippett studied at Leicester School of Art and the Slade in London. Graduating in 1957, he discovered the British Museum's collection of Japanese brush paintings and he recalled that "something awoke in me and I entered another realm" (B. Tippett, Exhibition catalogue, England & Co. London 1992). These timeless graphic works, compelled Tippett to reevaluate the relationship between the world around him and how he recorded this “It was while drawing some stakes in water that I realised the inherent difference between my experience in front of nature and my experiences while actually working at drawing and painting. The realization was all important, and eventually I eliminated all associative elements from my work” (Ibid). This move towards abstraction coincided with his first one-man show at the Lord’s Gallery, London in 1958. Despite its success he left for Paris soon after on a French Government Scholarship. Here he first experienced New American Painting and was particularly drawn to the work of Kenneth Noland, Helen Frankenthaler, and Morris Louis. Shunning the use of traditional mediums, he started to use plastic paint on raw or stained canvases, pouring and rolling it onto the surface. The early 60’s saw the introduction of three-dimensional elements such as cloth, plastic or wood attached to the canvas as Tippett further explored the objectification of the painting itself and by the mid-60s he was producing his acclaimed scroll top paintings; one of which was purchased by Dorothy Miller for MOMA in New York. During the 1966 Venice Biennale Tippett met the New York gallerist, Betty Parsons who he invited to visit his studio in Rome. Impressed by his work, she chose several paintings for an upcoming exhibition back in New York and this led to Parsons signing Tippett as a gallery artist. As one of the most influential galleries in New York and central to the careers of artists such as Jackson Pollack, Ellsworth Kelly, Mark Rothko, Jasper Johns and Agnes Martin, this placed Tippett at the centre of the New York art scene of the 60s and 70s.

Indeed, Clement Greenburg said of Parsons, “In a sense like that in which a painter is referred to as a painter’s painter or a poet as a poet’s poet, Mrs. Parsons’ is an artist’s - and critic’s - gallery: a place where art goes on and is not just shown and sold.” The early 1970s saw him continue to explore the concept of motion expressed in the Betty Parsons exhibition by creating impressions of the ribbed floor matting, using graphite and coloured crayons.

Between 1975-1977 he worked exclusively in charcoal evoking the landscape. Betty Parsons described these as:

Drawings that hide in the mountains,
Walk in the wind,
Melt into eternity.

Tippett travelled extensively throughout his life, including prolonged trips to Kenya, Egypt and India in the late 70s and 80s. These ancient and expansive landscapes inspired his work. Figuration crept in but always in relation to the exploration of the work as an object with shape, colour and texture. Tippett continued to innovate and experiment well into the 21st Century and a move to Sainte-Foy-la-Grande, France in 2005 emboldened his work, discovering new media and exploring new techniques once again. Writing in the exhibition catalogue for his 2008 Leeds exhibition at the Artco Gallery, Lynne Green comments “That Tippett retains his ability to invent and to challenge himself with the use of new materials and with a different approach to his media is remarkable. His work continues, as it always has done to reflect its origins: in his early and profoundly important encounter with Japanese brush painting; in his enthusiasm for the new American painting; in a concern to address the historic time in which he has lived; in an active engagement with the cultures of others; in his eclectic taste in avant-garde music and dance; but above all, in the sensual and emotional pleasures of the world.”
L. Green, Exhibition catalogue, Tippett, 2008, Artco Gallery, Leeds. Searching for the New

Bruce Tippett, as a man and an artist, was never content to settle. Always searching for new experiences that would enrich his art. He lived and travelled around the world, absorbing all around him, distilling these experiences onto the canvas or sheet before him.

There are distinct periods within his work, however he recognised from the start the “inherent difference between my experience in front of nature and my experiences while actually working at drawing and painting” and it is this recognition and understanding of these different forms of experience that runs through all his periods, making his later work as dynamic and interesting as his earlier pieces that so enlivened the art world of London and New York in the 1960s and deserve to be seen by a wider audience today. AUCTION DETAILS
This is a timed online auction running from 26 August - 16 September 2021.

Viewing is by appointment. Visitors are encouraged to wear a face covering while in the building, use the hand sanitiser provided on entering and observe social distancing rules. We may need to restrict the numbers of visitors viewing at one time, so if you would prefer to book an appointment in advance, please email pictures@dreweatts.com or call +44 (0) 1635 553 553

REMOTE VIEWING SERVICE:
Remote Viewing will also be available by appointment from Monday 13 September.  Our Remote Viewing Service allows you to view specified lots via your smartphone from the comfort of your own home at a time convenient to you. Find out more here.