On Wednesday 8 July Bloomsbury Auctions are delighted to present the auction of The History of Western Script: A Selection from The Schøyen Collection, in Celebration of the Collector's Eightieth Birthday.

On 31 January 2020 Dr Martin Schøyen became an octogenarian. He has been collecting examples of ancient, medieval and sometimes modern palaeography, as well as other rare book related artefacts, for nearly sixty-five years. Depending how one counts, he has between 14,000 and 20,500 items at present, so at its upper limits nearly one item per day for the entire period he has been collecting.

This is the third substantial auction sale from The Schøyen Collection, following that of Sotheby's on 10 July 2012, and Christie's on 10 July 2019. This sale follows the model set by those earlier sales, in keeping at its heart Dr Schøyen's wish to inspire interest in palaeography and supply freely available study materials for its teaching.

Ahead of the auction, we pick out some of the highlights.

In this section of the auction we include items on almost every writing surface employed by man: stone, clay, linen, wood, bronze, papyrus, parchment and even gold.

The highlight of the collection is Lot 3, the Kushim Clay Tablet, a large and remarkably fine pictographic tablet recording beer production at the brewery at the Inanna Temple in Uruk, with the apparent personal name 'Ku-shim'. This "exceptionally fine, perfect, administrative tablet" is not only the finest such tablet in The Schøyen Collection, but it also has claim to be the earliest known record of any personal name in history. 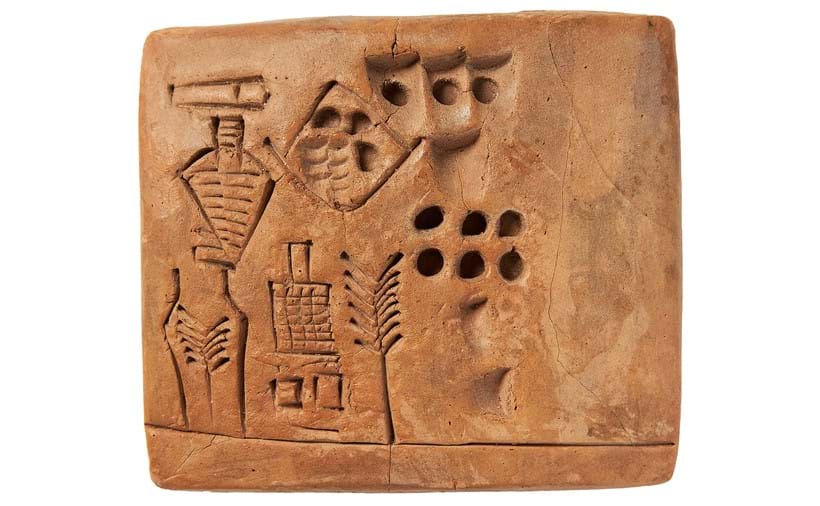 Here the symbols show the viewer the entire industrial process of making beer: from an ear of barley or corn, to a brick-building with a chimney that might be the brewery itself, and finally the barley or corn within a jar signifying the beer. The dots and other impressions most probably indicate numbers, probably recording that the amounts of beer produced were vast, some 134,813 litres of barley to be delivered over 3 years (37 months). At the end of this are two non-pictographic symbols of the greatest importance (here in top left corner). They spell out the two sounds 'KU' and 'SIM', and are most probably the name of the government official responsible. As noted by Y. N. Harari in Sapiens: A Brief History of Humankind and publicised by National Geographic in 2015, this apparent signature lays claim to be the first personal name of any human in history, and as Kushim was most likely the scribe, this is the earliest person to employ writing who we can name. He is known from seventeen other tablets, and in some of those addressed as "Sanga" or temple administrator. None of those, however, appears to be recorded in private ownership, and this is probably the only chance to acquire any form of this fundamentally important record.

In this section we open with a remarkable example of a so-called Dark Age or Early Middle Age 'local' script. Lot 18 is a copy of Bede's homilies in an excellent Anglo-Saxon minuscule probably written in a French Continental centre in the first quarter of the ninth century.

Lot 18: Bede, Homilies, in Latin, cuttings from a manuscript in a fine Anglo-Saxon minuscule on parchment, [most probably north-eastern France (perhaps Arras), first quarter of the ninth century] | Est. £20,000-30,000 (+fees)

These are substantial cuttings from a copy of a work by Bede, the foremost Anglo-Saxon author, here in Anglo-Saxon miniscule, copied on the Continent in a house under English influence or by a visiting English scribe. The use of Anglo-Saxon script in Continental Europe during the close of the Early Middle Ages is a testament to the influence of English missionaries there in the eighth century.

The script of the eleventh and twelfth centuries is sufficiently distinct from the Gothic and it sits alongside a period of art history and architectural history called the Romanesque, and shares many characteristics of art of the period. Moreover, the eleventh century in particular has a dazzling variety of palaeographical forms and conventions, and many still awaiting serious study.

This section closes with one of the rarest items in The Schøyen Collection, Lot 46. 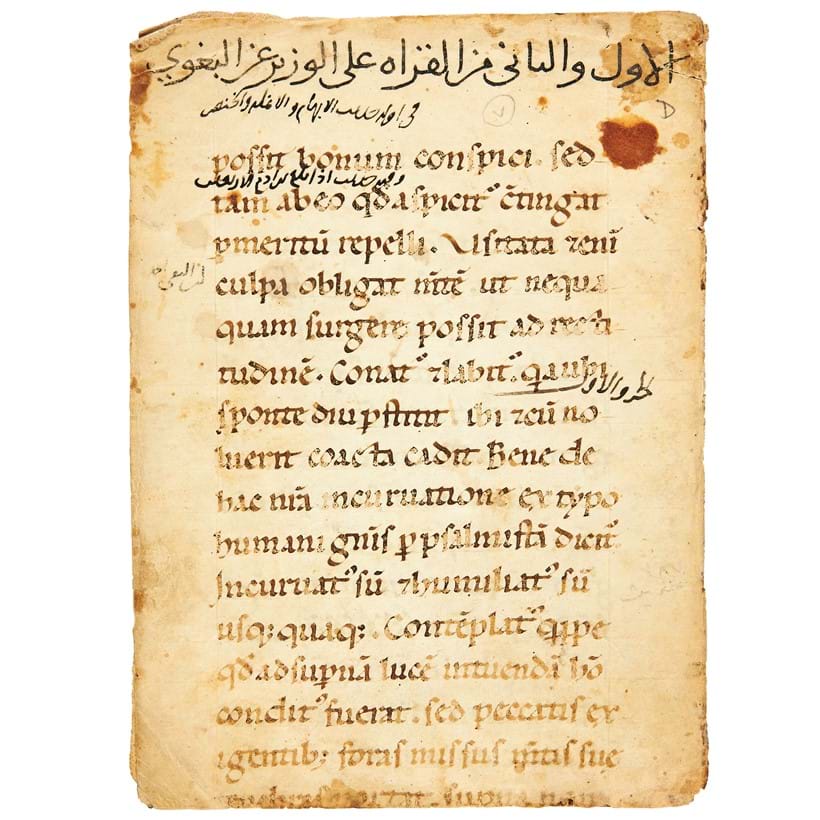 Lot 46: Kitab Alif Laila, the Book of One Thousand and One Nights, in Arabic, short quotations added to twelve cuttings recovered from Christian manuscripts, including various Bibles in Latin and a leaf from a copy of the Decretals, a Menaion and Oktoechos or Parakletike in Greek, an orthodox prayerbook and a Bible in Armenian, and a few originally blank pieces of parchment most probably from similar Christian books, manuscripts on parchment, [France, Italy, perhaps England, Armenia, and Byzantium, ninth to twelfth century, with additions from the Holy Land in the late twelfth or early thirteenth century] | Est. £25,000-35,000 (+fees)

This is a series of leaves evidently taken from books left behind by Crusaders and their Greek and Armenian coinhabitants when they fled Jerusalem in 1187 during the siege of Saladin. They were then reused by the Muslim invaders as covers for an Arabic copy of the Kitab Alif Laila, the Book of One Thousand and One Nights. These leaves were sold last in 1993, and since then nothing like them has appeared on the market.